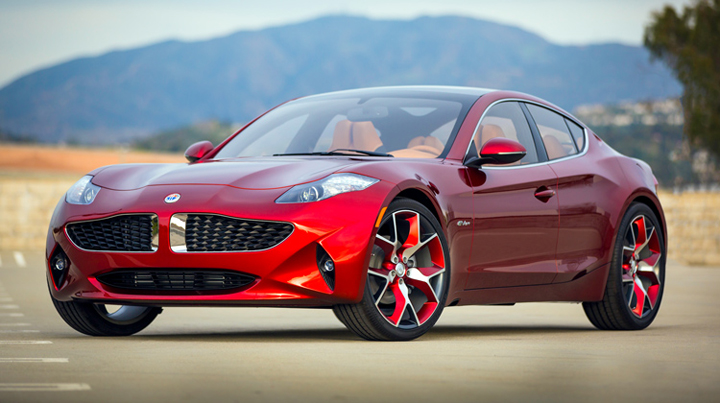 It looks like it’s one step forward for Fisker Automotive after a few steps back. The maker of luxury plug-in hybrid electric cars has announced the next vehicle in its expanding family—the Atlantic sedan—at this week’s New York Auto Show.

Though an on-sale date, prices, and specifications were withheld when the design prototype of the four-door Atlantic was unveiled, the company touted the car’s “practical interior” and said it is “aimed at young families who want to drive an impactful, high-end vehicle while making a positive statement about responsibilities.” It was compared dimensionally to the Audi A5. We take all of this to mean that whenever the Atlantic’s tide finally comes in, it will be priced somewhat south of Fisker’s larger flagship Karma sedan, which is on sale now at a starting price of $102,000.

The company said the standard powertrain configuration will be rear-wheel drive, with all-wheel drive optionally available. Power will again come from a plug-in electric motor supported by a 4-cylinder gasoline engine that acts as a generator to charge the lithium-ion batteries that feed the electric-drive system.

If nothing gets in the way of the Atlantic’s roll-out, it would potentially be the fourth vehicle from the company, following the Karma, the Sunset convertible, and the Surf wagon. Production of the Sunset and Surf as 2013 models was announced at last fall’s Frankfurt Auto Show.

However, events haven’t always moved quickly or smoothly for the U.S.-based start-up automaker. The Karma, announced in 2008, was planned to be out in 2010, but it didn’t hit the market until late 2011—which cost Henrik Fisker’s company crucial U.S. government loan dollars. The Sunset concept, shown at the 2009 North American International Auto Show in Detroit and winner of North American Concept Vehicle of the Year honors in the “Production Preview” category, was intended to follow the Karma to market. The company had hoped to begin Atlantic production this summer in a former General Motors plant in Delaware, but the need to conserve capital may force Fisker Automotive to look outside the U.S. for production facilities. (The Karma is produced in Finland.)

Meanwhile, events in the public eye have been somewhat uneven for Fisker. A potential battery fire hazard resulted in the recall of 239 cars last December. Then, this March, a Karma purchased by a national publication for evaluation refused to operate. The battery supplier determined that a manufacturing problem was the cause, which resulted in another recall. On the upside? Teen heartthrob Justin Bieber received a Karma as an 18th birthday present while he was appearing on The Ellen DeGeneres Show on March 1.