Once hugely popular, compact pickup sales have dwindled steadily since the end of the Nineties. A 1984 GMC S-15 is show here.

Consumer Guide recently sat down with GMC marketing manager George Jones to talk about the all-new 2015 Canyon midsize pickup. Here’s what we learned:

Ford dropped the Ranger from its North American lineup after 2011, and Nissan and Toyota have arguably allowed their small-pickups to grow dated. What does GMC see that compels it to enter a market that is seemingly small and shrinking? 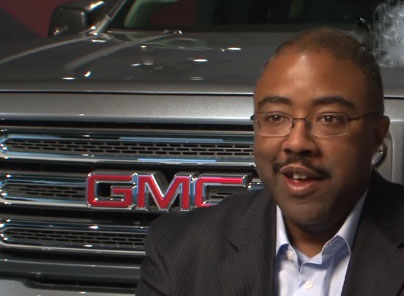 George Jones is marketing manager for the 2015 GMC Canyon.

What we’ve found from our research is that there are a lot of consumers out there who have left the “mid pickup” segment because the vehicles weren’t offering the comfort and amenities that they wanted. So they moved over to compact crossovers, basically.

It’s not that they didn’t want the pickup truck. They wanted the capability, they wanted to be able to tow, they wanted the payload for trailering. But they could get those things in a small SUV these days, most of which tow 1500 to 3500 pounds.

That’s all that these guys needed. But what they really told us was, “I just want something more comfortable. I want something a little more refined. My old pickup truck, whether it be a [Chevrolet] Colorado or [Ford] Ranger, or whatever it might be, it just wasn’t doing it for me.”

Anyway, look at Toyota or Nissan today. They’re still selling fair volumes, but I would say they’ve neglected the segment. If you look at the interiors of those cars, they’re due for a makeover. We looked at those consumers and the research, and felt that this was the time to re-enter this market.

Canyon is based on the global Chevy (compact pickup) that we’ve had in other markets, but we totally reengineered it for the North American market. we’ve refined it, obviously, especially in the GMC case, for the GMC driver. We think consumer reaction to this thing is going to be great.

Is there a group of potential Canyon buyers, those that have been out of the large pickup market for a generation or so, that simply find the current crop of big trucks too large?

We do know that there will be some people that will migrate from full-size to midsize because of the capability they have and the refinement. But we’re not worried about hurting sales of the full-size trucks too much. People who want a Canyon want something a little smaller and a little more maneuverable. The guys who want full-size pickup trucks, they tell you that they just have to have a big truck.

It’s funny when I go and sit in someone’s home and listen to them talk about how they use these trucks or those trucks. It’s just amazing. Some of these guys don’t even use the towing on their truck on a day-to-day basis, but they’ve just got to have it–they just want it. They’ve always had a full-size truck. They can’t imagine driving anything else. So definitely there are two different markets for these products. You’ll get some interaction between the two, but for the most part, they are distinct. 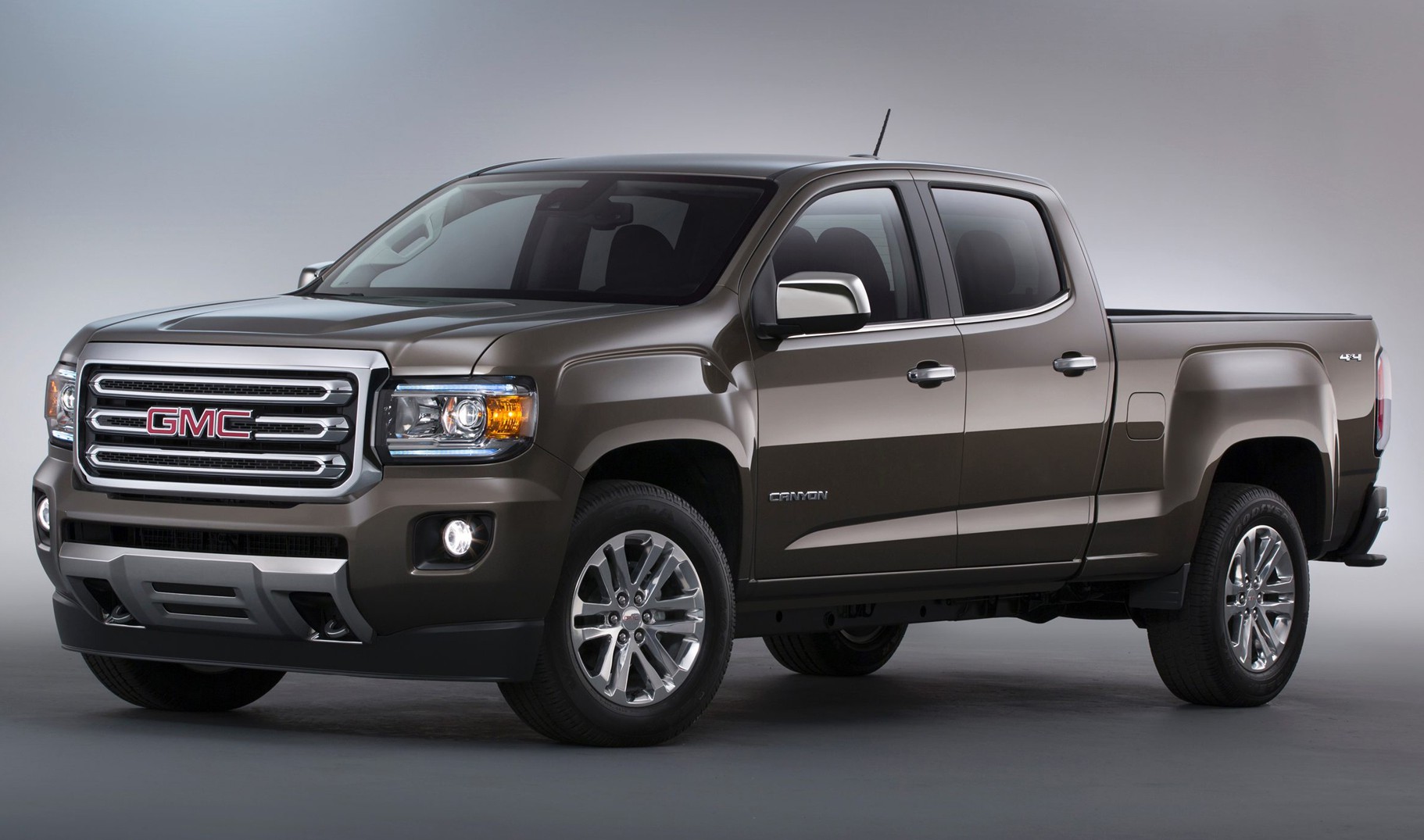 The 2015 GMC Canyon will not be available in regular-cab guise. A crew cab is shown here.

Who is the typical 2015 GMC Canyon Buyer?

We expect the audience to be close to 80% male. Compared to the Chevy (Colorado) our buyers skew a little more professional, either in career or mindset. And that’s one way we separate ourselves from Chevrolet. GMC is professional- grade, you’ve heard that line.

Compared to the Chevy, our styling is a little bolder, a little more aggressive. Inside you’ll see more premium materials, and more features and amenities. Canyon buyers will pay a little more than Colorado customers, but they say they want more, so they’re willing to pay it.

We’re looking at buyers that are about 40 years old, maybe one or two kids in the home, with an active lifestyle.

At GMC we find that we get a lot of DIY people as customers, weekend-project warriors. Whereas Chevy customers are more likely a little more outdoorsy, a little more the camping type. 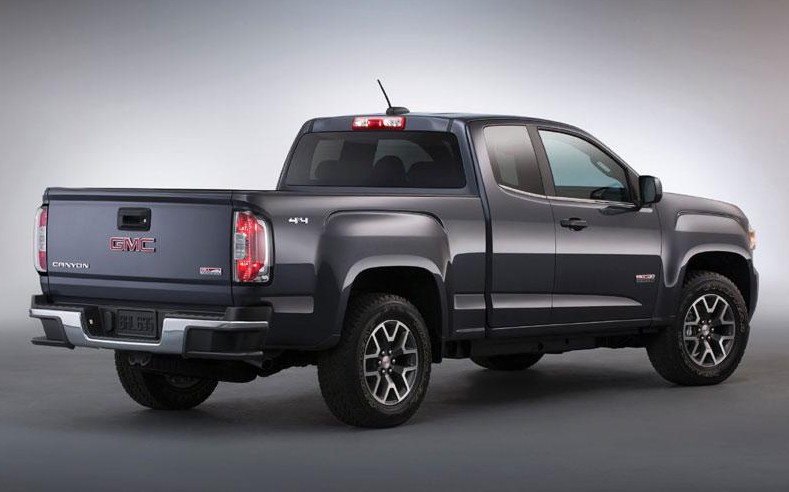 Eighty percent of Canyon buyers are expected to be male. An extended-cab example is shown here.

You said you expect the 80 percent of Canyon buyers to be male. What is the gender split on the full-size Sierra?

Do you expect Canyon to be a primary vehicle for most shoppers, or a second or third vehicle for chores, projects, and the like?

In most cases it will be a primary vehicle. Our customers tell me how they use their car for their dirty jobs. And I say, but you’ve got a pickup truck! And they say, well I can’t get my pickup truck dirty. This is for taking the kids to school and driving to work. When I need to do something quick and dirty I’ll use the car.

The typical Canyon owner will want to be able to use it for whatever needs arise, and just day-to-day regular use. That’s why we’ve done what we’ve done with this truck in terms of refinement. So if you’re commuting to work, you’re going to be just as comfortable in this vehicle as you would be in a crossover or midsize car.

[We’ve done] things like sculpting the headliner for taller people so they have more headroom. We’re expecting to be class-leading in quietness, so we definitely made it to be a vehicle that you could use for whatever the need might be.

Is it necessary, then, to post big payload numbers?

We’re looking at 6700 pounds of trailing capability and 1450 of payload, which would lead the segment. For the few consumers coming down from larger trucks, they’ll need all that capability; most won’t. But for those that want it, it’s there.

For most customers, the numbers won’t mean as much as the features, refinement, and quietness.

You’re not offering a regular-cab version of the Canyon. Is that market completely gone?

Yeah, we looked, and “reg cab” is down to about seven percent of the market. We chose not to compete there.

Are there geographic markets in which you think that this vehicle might have appeal where a big truck wouldn’t? Maybe closer into cities?

Yeah, it’s definitely going to have an appeal to the urban buyer. Mid pickups already sell well in California, Florida, and Texas metropolitan areas, we expect to do well there.

But we also expect to do well in Midwest and East-Coast markets where mid pickups were once more popular, especially around urban centers.

Can you talk about the diesel at all?

Not much to say about diesel, other than it is coming next year. We haven’t released the specs on it yet. But it will be a 2.8-liter 4-cylinder turbodiesel.

Seems like a lot of people scream for diesels and then don’t buy them when they show up. Your thoughts?

So far the feedback has been very positive about wanting a diesel for the Colorado and Canyon. I’ll be interested to see. We haven’t released penetration numbers on the diesel, but we expect it’s going to be about 10% of our mix.

What will the 4-cylinder/V6 production ratio be?

On a 6-cylinder, I think you’re going to see about 60-70 percent. We’re expecting to have great fuel economy, obviously, from the 4-cylinder. So if that’s your thing, the 4-cylinder would be the way to go. If you want a little more power, good fuel economy, and towing, you’ll go to the six, and we expect most shoppers to do that.

Can you talk about expected sales volume?