Comments
Written by The Daily Drive staff in Convertibles, Volkswagen 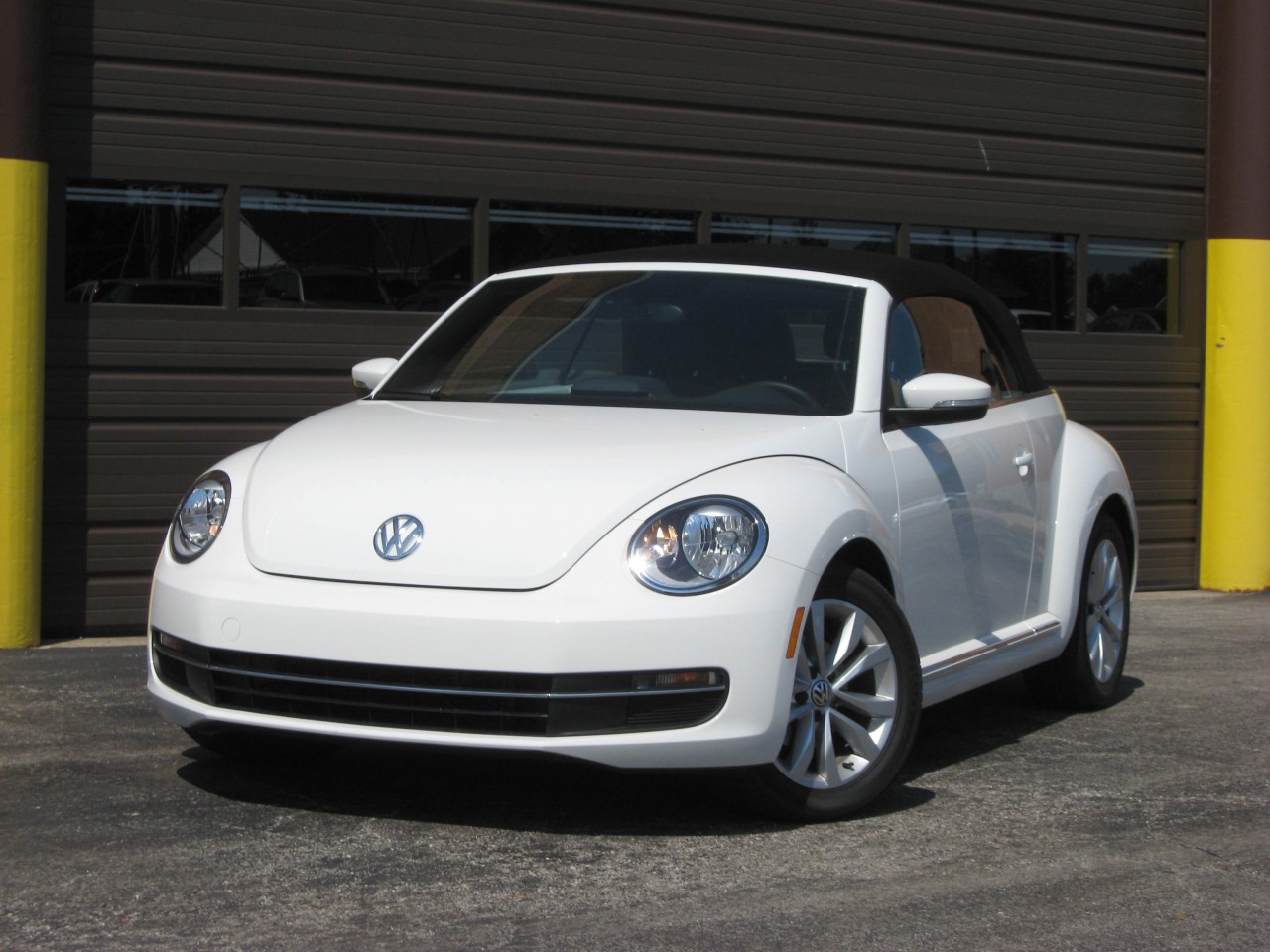 Our test Beetle is one of the only diesel convertibles Consumer Guide has ever tested.

The good: Impressive ride and handling

The not so good: Limited trunk space, limited rear-seat space

It’s easier to come away with a favorable impression of a convertible when its test period coincides with a perfectly convertible-compatible weekend like the one this tester just had while at the helm of a Candy White Volkswagen Beetle TDI Sound and Navigation ragtop. That good vibe lasted all the way to turn-in day and the requisite visit to the filling station, where the Beetle soft top took on just enough low-sulfur diesel to record 38.05 mpg after covering 165.5 miles, 53 percent of which were under city driving conditions. Over that distance, the car used up only about a quarter tank of fuel.

Thus, it takes a little effort to not overlook the flaws you might encounter while enjoying the wind-in-your-hair experience on a delightful summer afternoon. For one thing, the 2.0-liter turbodiesel 4-cylinder engine in the Beetle TDI convertible clatters loud and clear with the top down, especially in the first few nudges of the throttle after start-up. The torquey engine (236 pound-feet) gets the car away from stoplights without a problem, but then progress is leisurely unless the driver wants to engage in a forceful punch of the accelerator that brings the turbocharger into play. Meanwhile, stopping seems to wait until the driver has pushed the brake pedal pretty far down.

Backseat room is cramped for anyone over the age of 5, and top-up visibility is greatly restricted. Twin glove boxes alleviate interior-storage shortfalls a little, but the console box is petite, there’s a small open bin ahead of the console, and door map pockets are tiny; a single cup holder serves rear passengers. The trunk has room for perhaps a couple of soft bags, but little else. And while not the wiggliest convertible we’ve ever driven, there are moments of perceptible cowl shake.

What, then, made this car enjoyable, apart from the weather, which even Volkswagen AG can’t control? When the situation calls for it—like entering an expressway or passing—the turbo shoots the beheaded Beetle along with ease, and the 6-speed DSG automatic transmission hardly makes its presence felt. Steering is light but precise, and with the car’s small footprint, you can practically dial yourself into parking spaces.

Controls are handy and easy to use—though the rotary array for audio presets on the display screen takes little getting used to. It was darn near impossible to lose the satellite-radio signal, even in tunnels and beneath overpasses. If you don’t need the back seat for tiny passengers, the seat backs fold down (however not fully flat) for added cargo space. Front seats offer good comfort and support. With the top up, much exterior noise is filtered out. By our unscientific count, the one-button power top takes only about nine seconds to retract and about 13—with windows fully up—to close.

For its shortcomings and limitations, the Beetle convertible in this test is costly at $31,090 delivered. People buy it for its stylishness, and great top-down days will make it seem like a good idea. So will the long runs between fill-ups with the turbodiesel. Just be ready for some gray days—like when the payment’s due.

There aren’t many convertibles offered in this price class. But while pickings are limited, each has its plus and minus points, and it only makes sense to pick the choice that best suits your needs.

There are several strong comparative elements the Beetle convertible has going for it — and a few negative ones. Among its strengths are a power-folding top that’s well insulated, is activated by the simple push of a button, and folds very quickly; I timed it at about 10 seconds down and 13 seconds back up, and that includes lowering/raising the windows. 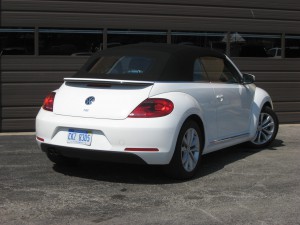 Other positives that stand out in the Beetle include a fairly rigid structure, a fine seating position, a nicely laid-out (and neat looking) dashboard, and a great ride/handling balance. Additional benefits of our test TDI are a turbodiesel engine that provides great fuel economy along with gutsy performance (save for a bit of turbo lag off the line, it feels all the world like a strong V6), and an automatic transmission that shifts smoothly and downshifts quickly for more passing power.

But all is not rosy in this picture. One of the worst elements of the Beetle is poor rear-corner visibility, which suffers due to the soft top’s extremely wide rear “pillars.” While this is also the case with most other convertibles, our tester lacked the backup camera that others use to great benefit. Also, while there’s decent but tight room for two in the back seat, the backrest is bolt upright, which is uncomfortable for any distance. Trunk space is also limited, though there’s enough for a weekend’s worth of soft luggage.

Especially if your plan is to drive top-down most of the time (which largely eliminates the rear-visibility problem), and fun in the sun at a reasonable price is your goal, the Beetle convertible just may be your car.