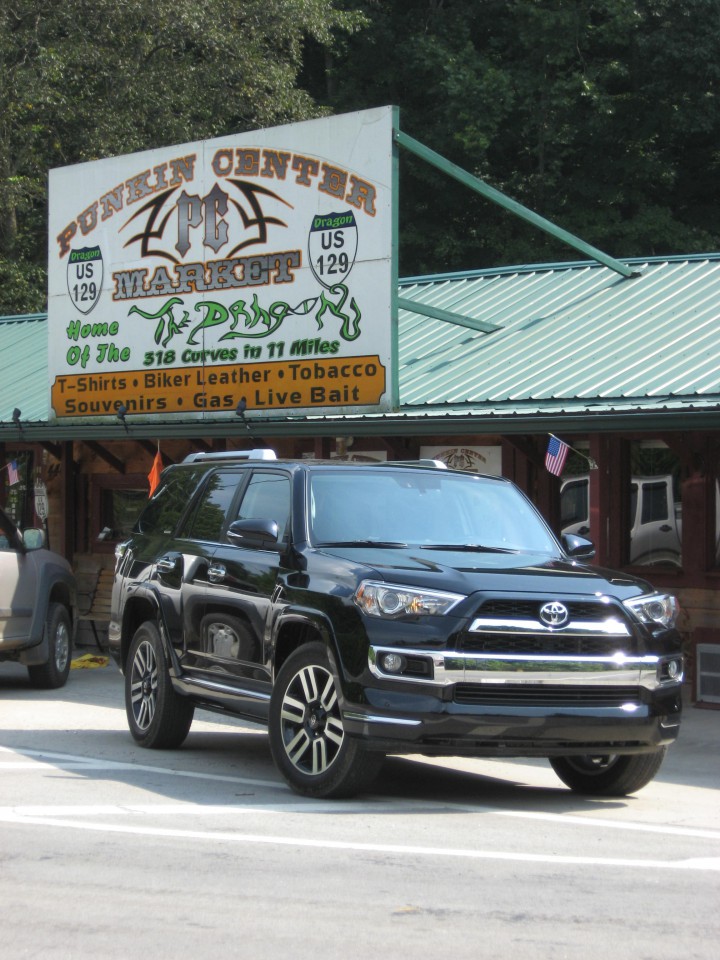 “The Tail of the Dragon” is a twisty ribbon of asphalt just outside of Knoxville that contains 318 turns in 11 miles. While a Toyota 4Runner – or any SUV, for that matter – is hardly the utensil of choice for carving through these corners, it managed to hold its own in this motorcycle mecca.

Its official designation is U.S. Route 129, and though it runs through four states along the Appalachian Mountains, it’s most renowned for an 11-mile stretch of tightly twisting asphalt known the world over as The Tail of the Dragon.

Located outside of Knoxville, Tennessee, “The Dragon” is a famous destination for motorcyclists (of which I am one) that is said to contain 318 turns in its 11-mile length. And these aren’t gentle bends; they’re mostly switchbacks that routinely wreak havoc on motorized vehicles and prompt locals to sell T-Shirts proclaiming, “I survived the Dragon.”

And not everyone does … or at least, not everything. A local landmark is “The Tree of Shame,” upon which is draped various and sundry motorcycle parts that have been dislodged in accidents over the years. Many trees lining the route – which runs near the Great Smokey Mountains National Park – bear the scars of corner planning gone bad.

This is hardly the type of road for which the Toyota Tundra full-size pickup is intended, and that’s primarily what our group of auto journalists was in Tennessee to drive. As such, our test route only skirted The Dragon. But I returned later in the somewhat more nimble 2014 Toyota 4Runner – which was also available for our evaluation – to run some miles through the storied Tail. 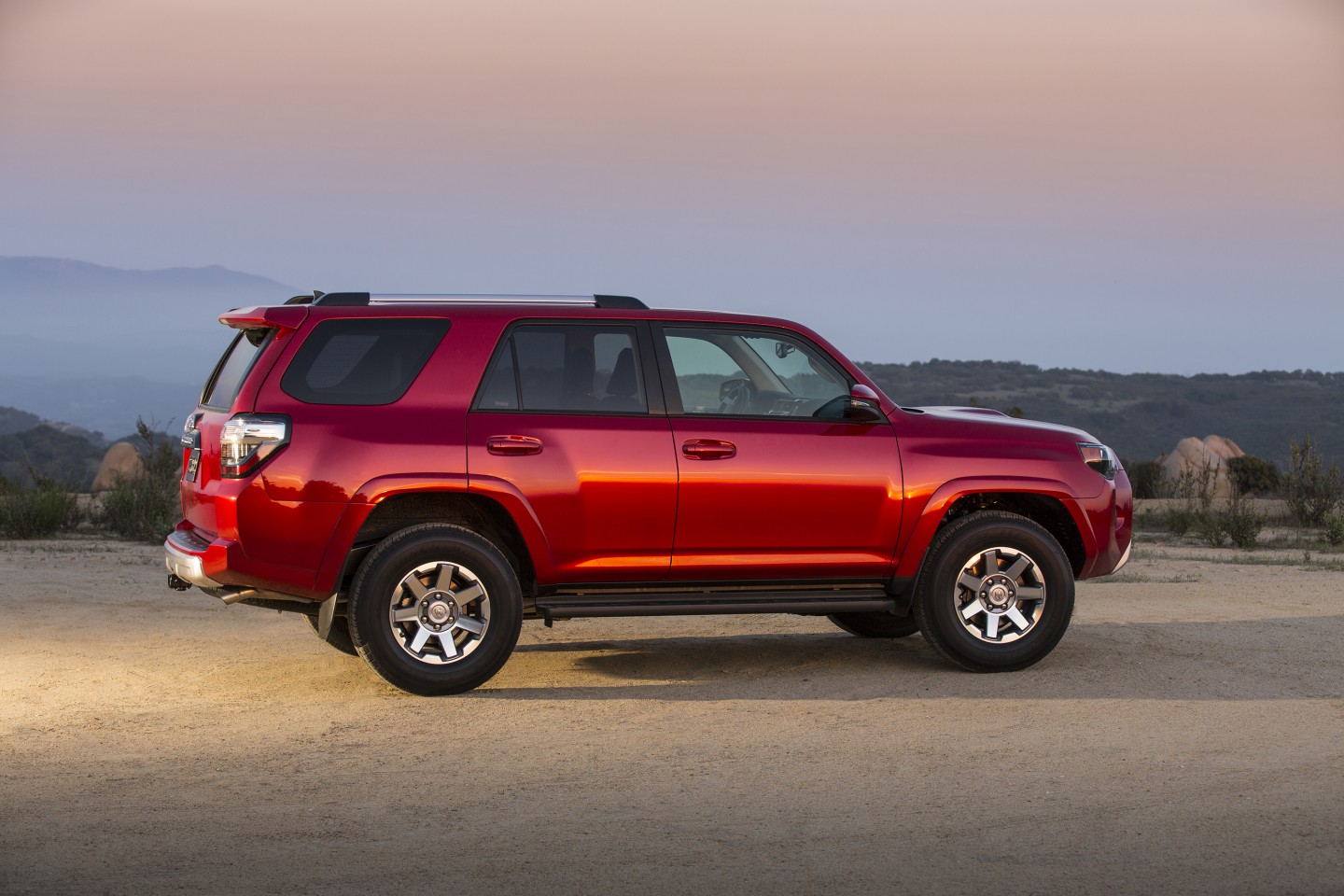 With its high towing capacity and strong off-road capability, the 4Runner lives up to its brawny profile.

Although time restraints prevented me from sampling its entire length, I managed to run about half of the Tail before turning around and heading back. And that was just about enough. Hustling something the size of a 4Runner through the tight twisties takes considerable concentration that quickly becomes fatiguing.

But everything considered, the 4Runner acquitted itself quite well. Among midsize SUVs, it’s the only one that retains truck-like body-on-frame construction (save for its slow-selling showroom sibling, the FJ Cruiser), which might benefit its off-road behavior, but usually detracts from on-road prowess. Yet the 4Runner rode and handled about as well as any other 7-passenger midsize SUV (the 3rd-row seat is optional), with the only sacrifice coming in some slight chassis reverberations over bumps, which is typical of body-on-frame vehicles.

The 4Runner comes only with a 270-horsepower 4.0-liter V6 mated to a 5-speed automatic transmission. This is kind of an “old school” powertrain by today’s standards, but it works well enough. Decent low-end torque results in a good full-throttle jump off the line, and the transmission downshifts quickly for more passing power.

Unusual for the class, rear-wheel drive is standard, and lower-line models are available with a part-time four-wheel-drive system with low-range transfer case. (Most competitors offer front-wheel drive or all-wheel drive.) This part-time 4WD setup is okay – and in fact, often preferred – for severe off-road use, and is accompanied by several off-road-oriented features such as skid plates and Downhill Assist Control (and the Trail models add even more, including sway-bar disconnect for more wheel articulation). But part-time 4WD systems should not be left engaged on dry pavement as driveline wear can result, which makes these antiquated systems inconvenient for typical on-road use. The top-line Limited offers a modern AWD system – also with low-range gearing – but prices are high for a midsize SUV.

The combination of a torquey engine and stout, full-frame construction contributes to the 4Runner’s lofty 5000-lb towing capacity, which is augmented with a standard tow hitch and wiring harness, and – new for 2014 – available trailer sway control. The tradeoff, however, is in fuel economy. The 2WD model is EPA rated at 17 city/23 highway, the 4WD at 17/22. These aren’t great numbers for a midsize SUV, though they aren’t bad for a 7-passenger one. 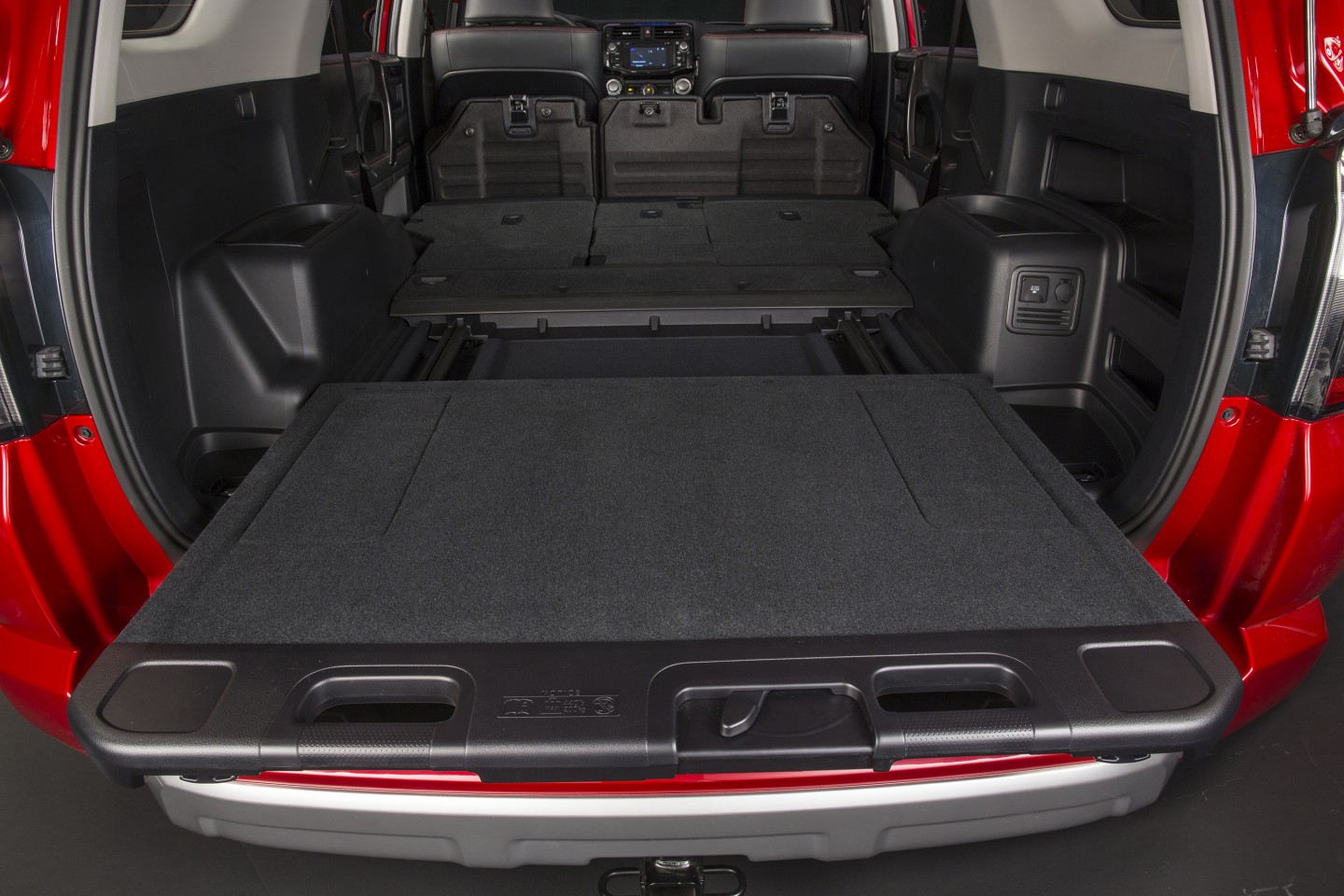 An available slide-out cargo floor adds to the utility of the 4Runner’s spacious load area.

A unique 4Runner feature (at least among midsize SUVs) is its power-down cargo-hatch window. Whereas most SUVs in this class use a one-piece liftgate, the 4Runner has a separate window glass that drops into the liftgate (as was the case with station wagons of yore). This allows you to carry long items such as 2x4s by letting them hang out the window, which is a nice cargo-hauling benefit. Another nice feature is an optional slide-out cargo floor.

The majority of changes to the 4Runner for 2014 involve styling tweaks (most notably, the front end is more aggressive looking), revamped interiors (with nicer materials), new trim levels (there are now eight), and added features (a rearview camera is now standard, and some trim levels add items such as Toyota’s Entune infotainment system). Prices had not yet been released at the time of this writing, but Toyota indicated they would remain about the same as for the 2013 models despite the added equipment. That means the base SR5 2WD should start at around $32,000, while the top-line Limited 2WD should start at about $40,000; add roughly $2000 for 4WD or AWD.

While the midsize-SUV norm is now a unibody design with front-wheel drive or optional AWD, and most have more sophisticated powertrains and better fuel economy, the 4Runner stands out as a heavier-duty, off-road-oriented alternative. And as my experience on the Tail indicated, it really doesn’t suffer much for these attributes.

An unusual feature of the 4Runner is a power tailgate window that drops down for easy loading of small parcels while allowing long items to hang out the window.