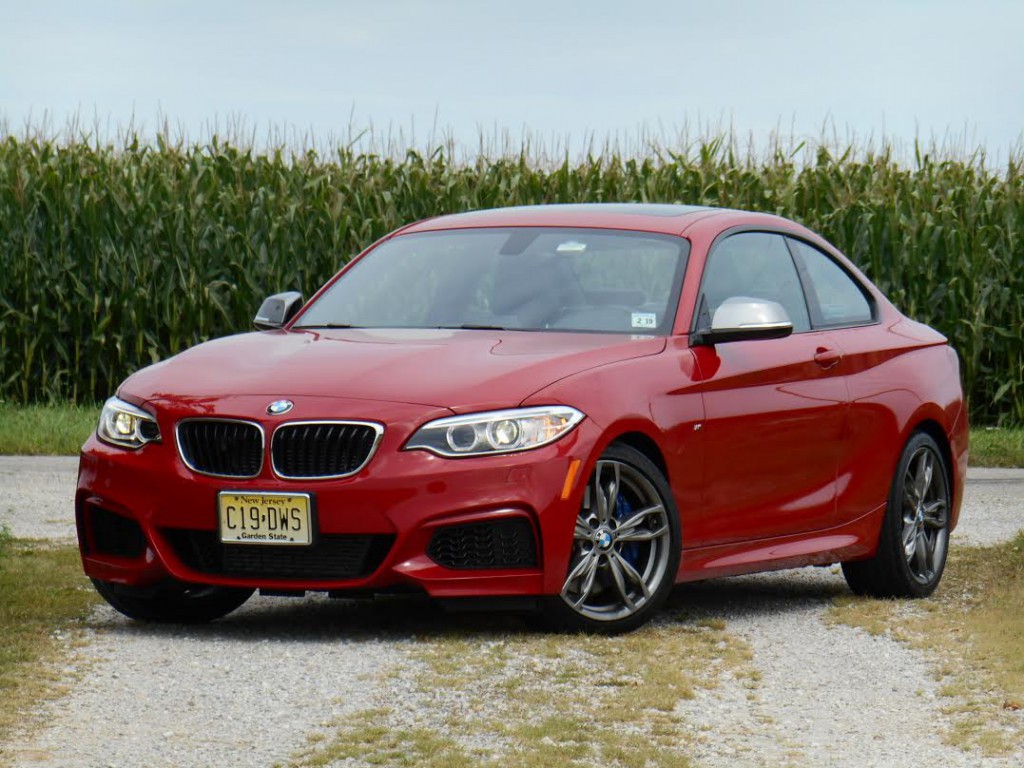 The not so good: Severely limited rear-seat accommodations

Click here for more information about 2-Series pricing and availability

BMW, maker of the self-proclaimed “Ultimate Driving Machine,” has a new minimal driving machine. That would be the turbocharged 6-cylinder M235i coupe.

In the strictest sense, the M235i isn’t the tiniest BMW on offer—that distinction belongs to the 2-seat Z4 convertible. It is, however, the smallest of the “comes with a back seat” group. While a bit bigger than the snug 1-Series coupe that it replaces, wheelbase is still a tidy 105.9 inches and overall length comes in at 174.5 inches.

At the same time, it is at the moment the only 2-Series car available with a 6-cylinder engine. Despite its prefix, it is not a full-on BMW “M” machine that has been modified from top to bottom for maximum performance, but an enhancement of the 4-cylinder 228i model. (An all-in M2 is said to be coming.)

That six, an inline 3.0-liter with twin cams and twin turbochargers, generates 320 horsepower at 5800-6000 rpm. It’s a honey. With the Driving Dynamics Control set in “Sport” mode, you don’t even have to fully nail the M235i from a stop to sense huge thrust right off the bat—and with no overt turbo lag. Merely nudge the accelerator on the highway and the 3500-pound coupe shows its readiness to go to battle stations. Consumer Guide®’s test car was equipped with the fast-acting 8-speed “sport” automatic transmission with paddle shifters and a launch-control feature, but 3-pedal drivers can still get a 6-speed manual trans as a no-cost option. 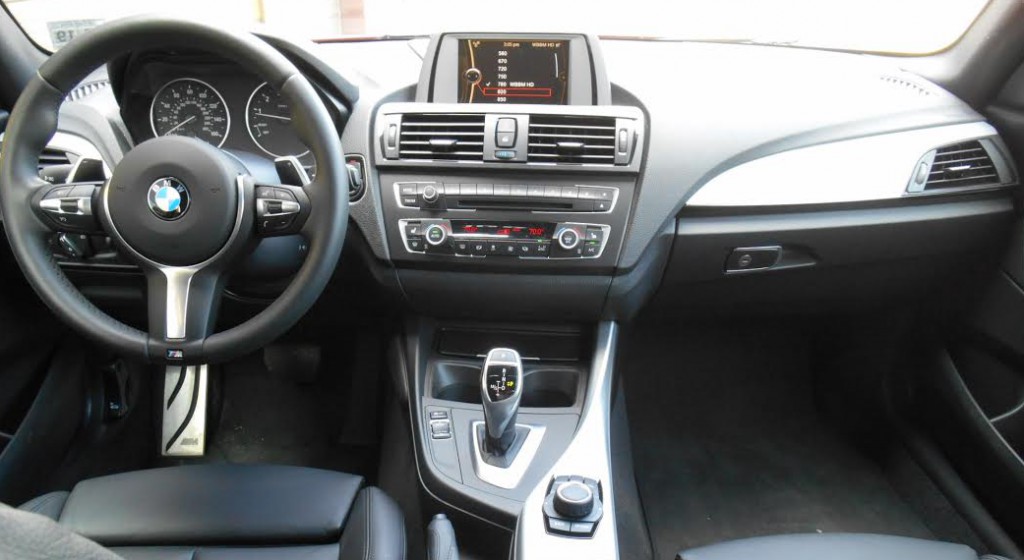 Like many BMWs, the M235i’s cabin comes off as more businesslike than overtly luxurious. Editor Cotta notes finding the newest generation of BMW’s iDrive control system easier to use than previous versions.

This driver covered most of his 168.4 miles in the car with Sport mode activated. With 40 percent of that under city driving conditions, he averaged 22.79 mpg. An “Eco Pro” mode, with an engine stop/start cycle, is designed to calibrate engine performance differently to maximize fuel economy. EPA ratings for the rear-drive M235i (an all-wheel-drive version is available, too) are 22mpg city/32 mpg highway.

Aside from the appreciable changes Sport mode makes to the car’s acceleration and sound, it also alters ride and steering characteristics. Frankly, the M235i handles sharply with next to no cornering lean in any mode, but the Adaptive M Suspension in Sport mode makes for an exceptionally firm ride—perhaps moreso than some will like for every single trip—so the “Comfort” setting may come to the rescue for a lot of day-to-day commuting. The 235i’s stouter standard M Sport brakes provide excellent stopping power.

In addition to an xDrive (AWD) M235i model, 2-Series coupes are also offered in 4-cylinder 228i and 228i xDrive configurations.

Inside, you feel a close connection to the M235i. The cabin is very cozy—not really spacious, but not cramped either. Front seats can be adjusted to provide as much side grip as you think you’ll need for comfort or for aggressive driving. Trunk capacity is not bad for a car of this diminutive size, though the opening is a little narrow. Rear seats fold almost flat, but you’ll probably need to remove the head rests first, and a gap exists at the base of the seats. The best interior-storage feature is very big segmented door pockets. Otherwise, the console box, glove box, net pouches on the backs of the front seats, and a shallow open tray between the rear seats offer limited storage.

Demerits are assigned to the rear seats, where access is so-so (though a power-sliding feature for front seats makes this somewhat easier). This 5-10.5 tester’s doppelgänger could have sat behind him in the rear seat, but anybody longer of leg could not. Rear head room is none too generous, either. Surroundings are not particularly plush. (Leather upholstery, heated seats, and heated steering wheel? Get ready to pay extra for the privilege.) The iDrive climate and audio controller is a little less complicated than some systems of its ilk, but that doesn’t mean it’s uncomplicated. When illuminated at night, the red dials and pinkish trip-odometer display may blur badly for anyone who doesn’t use glasses for driving but benefits from them for closer work.

The name has changed, but the underlying car remains much the same. And that’s not a bad thing.

In order to make numeric room for the small, front-drive (!) 1-Series hatchbacks due here shortly, BMW retagged the former 128i/135i rear-drive coupes as 2-Series models. The sportiest of them – the M235i – is the subject of this test.

What the “35” part of the name signifies is that underhood lies a twin-turbo, 320-horsepower 3.0-liter inline six. Yeah, I know; it makes no sense. Welcome to the wondrously confusing world of BMW nomenclature. (Though hardly an explanation, fellow German rival Mercedes is at least as bad. Perhaps it’s something in the hops ….)

Although BMW’s larger 4-Series coupe (nee 3-Series coupe, another victim of the company’s sequence shuffle) is probably better known and more popular, the smaller 2-Series coupe has some innate advantages: namely, lighter weight and a lower price. In the case of the former, the difference is only about 100 lb., but in the case of the latter, it’s $3000. And our tester’s $43,100 base price also includes an extra 20 horsepower courtesy of “M” tuning. That price, by the way, includes your choice of a 6-speed manual transmission or our test car’s 8-speed automatic. 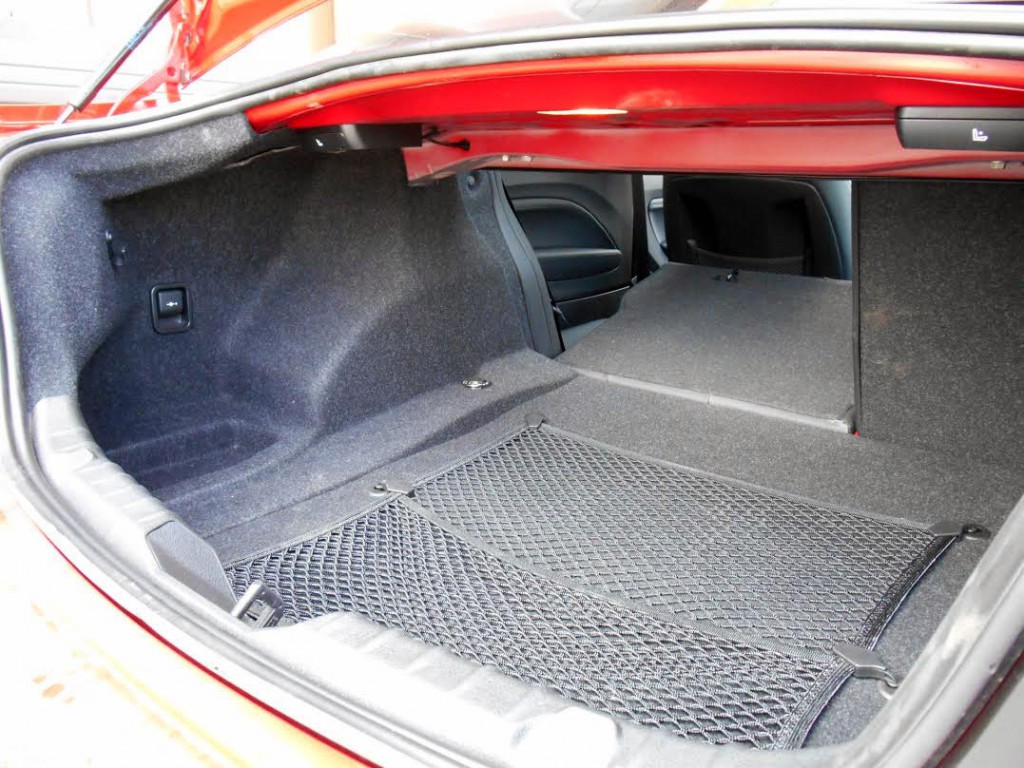 The 2-Series trunk isn’t large, but folding rear seats help when larger items need to be hauled around.

Dynamically, the M235i is a gem. BMW made its mark on a ride/handling balance second to none and the torquey smoothness of its inline six-cylinder engines, and the M235i demonstrates both. For a pretty serious sports car, it rides surprisingly well, especially considering its grippy cornering power and sharp steering. The turbocharged engine is a paragon of power delivery, as it suffers little of the lag normally associated with turbos. Nail the gas from a stop, and there’s just the slightest moment of “thought” before the car bolts off the line, pulling strongly and linearly until the first shift is snapped off. Furthermore, stabbing the throttle while underway brought quick kickdowns immediately followed by a strong surge of speed. BMW says it will reach 60 mph in 5.0 seconds, something our test car gave us no reason to doubt. My only “complaint” is that turning off the traction control via the handy console-mounted button seemed to make no difference in the amount of adolescent tire spin you could prompt – which is to say, virtually none. The car just hunkers down and leaves.

As much as I’ve typically liked BMW mechanicals, I haven’t been so fond of BMW controls – at least, not since the scourge of iDrive. In all fairness, the system has gotten better, but it’s not the only problem. For instance, there are 8 physical preset buttons underlining the dashboard screen that can be programmed for radio stations and other uses, and on/off and volume are controlled by a conventional dashboard knob. That’s all good. But other functions are controlled by a knob on the console whose movements are displayed on a dash screen. It results in your hand going to different places to make audio adjustments, and that just strikes me as odd. At least the major climate controls are grouped together, but though the system includes knobs for dual-zone temperature, it has tedious repetitive-step pushbuttons for mode and fan speed. Some other controls are worse. For instance, there’s a line of information at the bottom of the instrument cluster – including trip, odo, and outside temperature – that I couldn’t see from a seated position, as it was blocked by the steering-column shroud. Also, the door lock button is mounted in the center of the dash rather than where it should be – and where virtually all other manufacturers place it – which is on the door itself. Sorry, but … Duh.

There’s a surprising amount of room up front for tall drivers, but pushing the front seats all the way back negates using the rear seat for humans. However, I could easily fit behind my 5’9 self, and getting into the rear seat wasn’t as difficult as in many coupes. The only demerit from a comfort standpoint was that I could have used more lumbar support, as it’s not adjustable. Another slight demerit goes to cockpit storage, which consists of a decent-size glovebox, small covered console tray with adjacent 12-volt plug, two open cupholders, a very shallow console box with Aux and USB plugs, and large segmented map pockets in the doors.

Interior materials befit the price, but they’re hardly lavish. Visibility is quite good to front, sides, and rear thanks to thin roof pillars. The trunk opening is small, but strut-type hinges don’t intrude into the luggage space. The cargo area is wide at the rear with side storage wells, but there’s no underfloor storage. When folded to expand the space, the rear seat backs lie flat and level – a really handy touch – and the opening between the two areas is large.

In short, BMW’s smallest coupe follows the formula of most recent wares of the German manufacturer: A dynamic gem with some ergonomic flaws. Where it stands out is that all this comes at a comparatively reasonable cost.