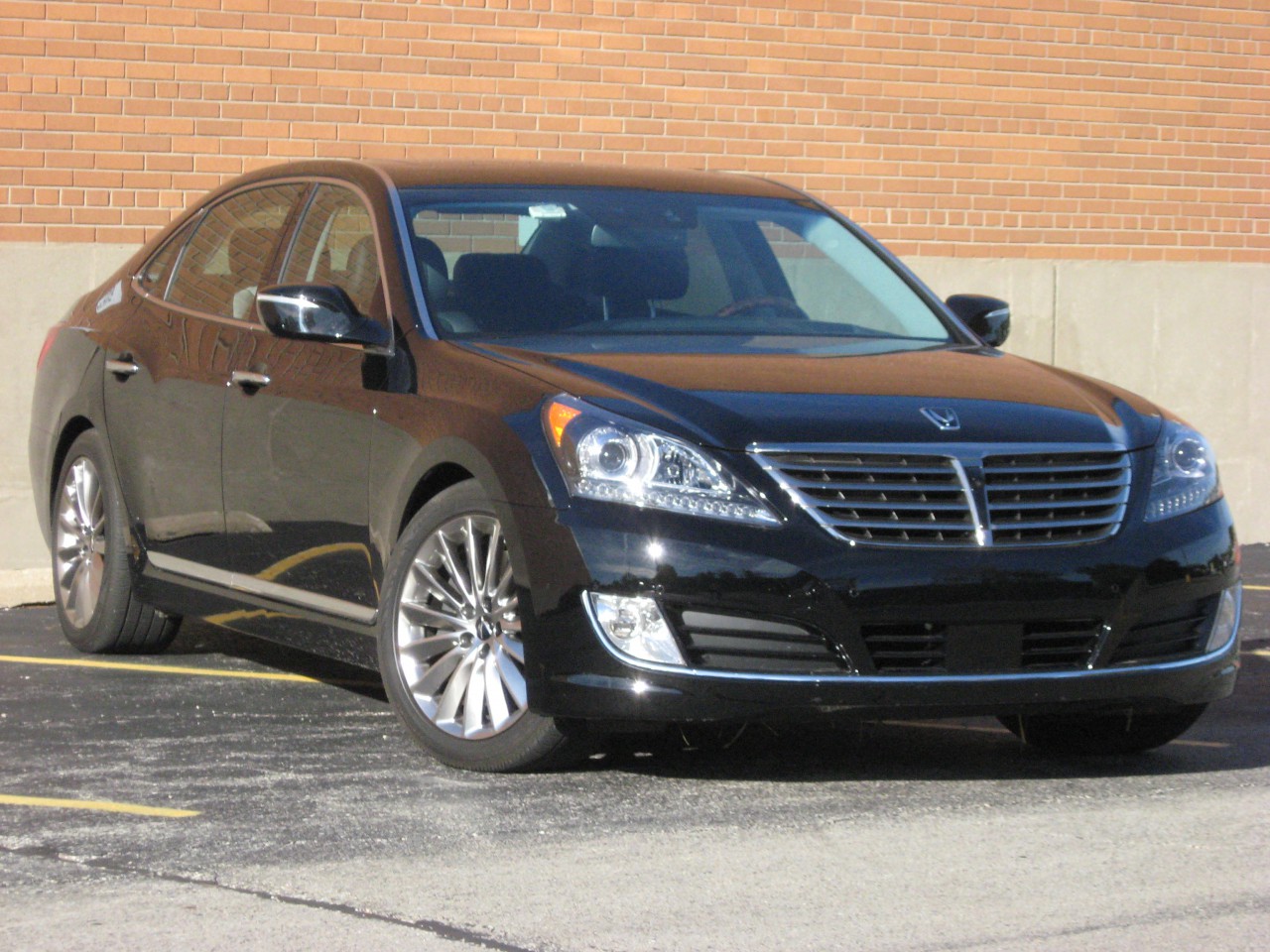 The Ultimate package costs an even $7000, and includes everything that can be ordered on the 2014 Hyundai Equus.

The great: Loads of power

The not so good: Ride harsh on poor road surfaces

In a lot of ways, the Hyundai Equus defies belief. In fact, even the manufacturer seems to be barely able to contain its amazement at what it hath wrought. The window sticker enumerates a lengthy litany of high-grade standard features, each item accompanied to its right by the notation “INCLUDED.” It’s as if an incredulous Hyundai is asking, “Can you believe we put this on a car?”

For consumers who’ve watched Hyundai since it arrived in America from South Korea in the mid Eighties with slab-sided nondescript econoboxes, an almost-$69,000 V8 sedan with Teutonic pretentions like the Equus Ultimate we drove will come as a shock. Here’s a bigger surprise: They just about pull it off.

The 429-horsepower dohc 5.0-liter engine provides nearly instant power from a standstill or when clouting it as needed for highway passing. The 8-speed automatic transmission delivers a nice, undramatic assist in either situation. What may wipe the smile off an owner’s face is a trip to the gas station. In a 75-mile stint with 82 percent city driving, this driver averaged just 15.15 mpg.

Inside there’s plenty of stretch-out room front and back—ample head room, too—in a leather-clad interior with wood accents on the dash and the heated steering wheel. The prestige-car experience is accented by a high level of quiet, brought about in part by the use of acoustic laminated glass in the windshield and side windows. The navigation system and controls for the 17-speaker surround-sound multiformat audio system read out on a big 9.2-inch LCD screen. A tri-zone climate-control system is included, too.

Where the Equus doesn’t quite carry off the big-bucks effect is in the ride. An electronically managed air suspension does a decent enough job keeping things cushy most of the time, but then along comes a crack or bump in the pavement and the jolt (and its accompanying “whump”) make it all the way up from the 19-inch alloy wheels to the cabin. If Hyundai ever nails that, the Equus truly will be unbelievable. 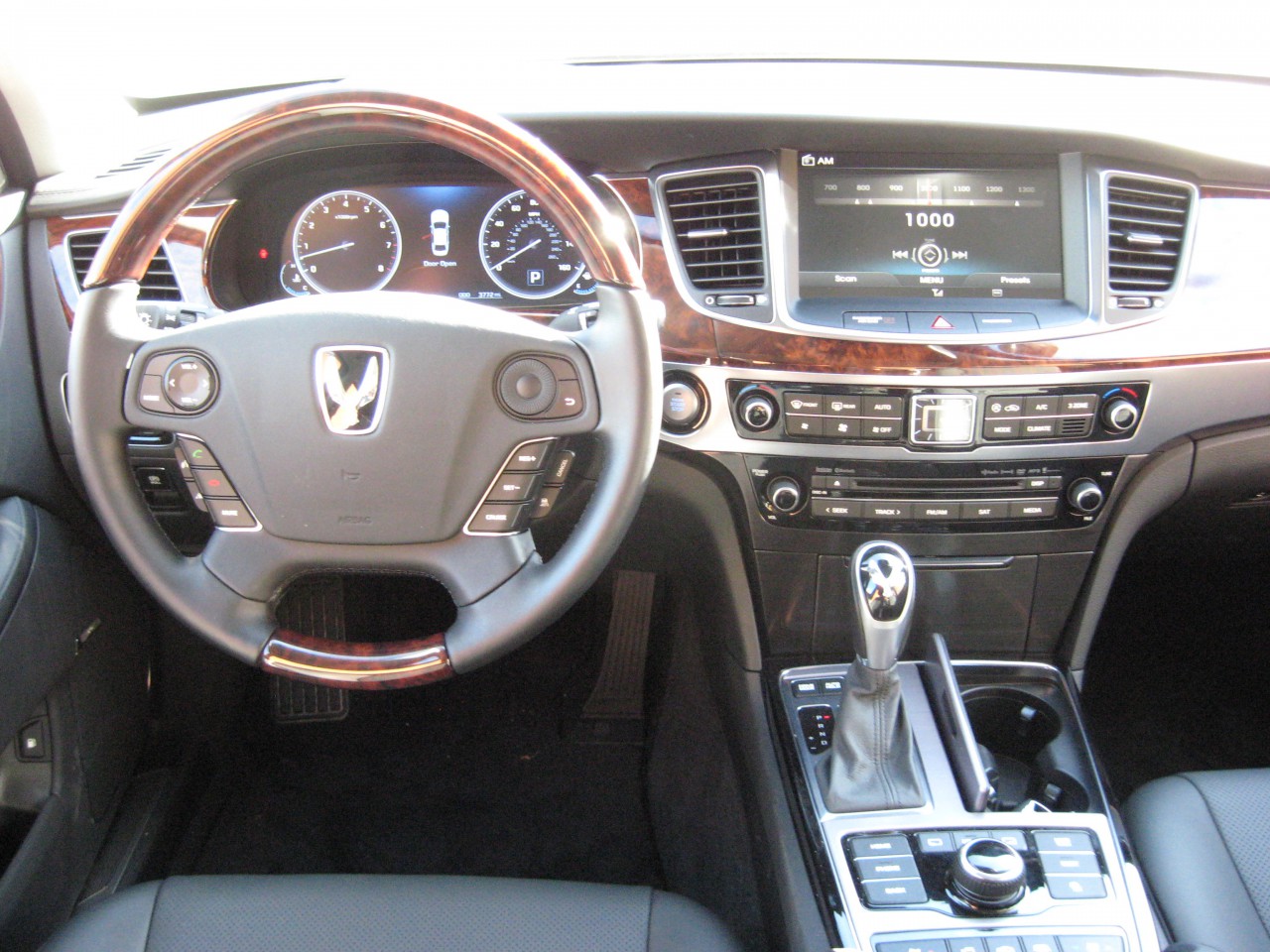 The 2014 Equus cabin looks less like that of a Mercedes than it did previously. Our regular photographer would have closed the drink-holder lid.

It’s hard to think of a car that costs nearly $69,000 as a “poor man’s” anything, but Hyundai’s large luxury-car flagship is angling to be a bargain-priced alternative to a BMW 7-Series or Lexus LS 460. I don’t think it succeeds with flying colors, but it delivers a convincing-enough luxury experience to be worthy of consideration.

Equus’s driving dynamics are appropriately high-end. The steering has a smooth, fluid feel, and the 429-hp V8 supplies more-than-ample acceleration with a rich, muted growl. Suspension refinement has typically been a weak spot in Hyundai vehicles, but our Equus tester did a fine job of smoothly absorbing most bumps and pavement imperfections. The ride is cushy and serene in steady-state cruising, but class competitors have a more composed, dynamic feel in enthusiastic cornering.

Equus’s cabin is classy and quiet, but its Korean-home-market origins are apparent when it comes to front-seat space… it’s not nearly as spacious as you’d expect in a premium large car. Apparently, VIPs in South Korea are usually driven in their cars more often than they drive them, so the back seat offers limo-like accommodations and the front seat seems to be on par with the typical midsize sedan. My 6’6” frame could have used a bit more legroom, which is not a problem I typically have in premium large cars.

The back seat, of course, is executive-jet fabulous, both in terms of space and amenities. The flip-down center armrest is chock full of comfort and convenience controls, and the seats are cushy and comfortable.

Large luxury sedans are all about cutting-edge gadgets, and the Equus definitely has its share. The Ultimate models include such goodies as a forward-view cornering camera, power rear-door closure, and a full-color LCD instrument panel that mimics traditional analog gauges. That digital display switches graphics depending on the drive mode the car is in–putting the car in sport mode calls up a red background and more-aggressive graphics… a neat touch.

However, I was put off by a number of ergonomic annoyances. The console-mounted dial control was often tedious to use, especially when inputting a destination into the navigation system; I often wished for traditional touchscreen controls. Also, the Bluetooth system took an unusually long time to pair with my phone every time I started the vehicle. This was especially annoying since the stereo would always revert to a radio station upon restart… at a volume about 50 percent louder than desired.

Quibbles aside, the Equus delivers on enough of its promises to worth checking out… if you can get your head around the idea of a $69,000 Hyundai.

At first glance, the 2014 Equus cabin appears unchanged from 2013. It is only after poking around for a while that you realize that almost everything has been changed, and pretty much for the better.

The Equus that first reached U.S. shores back in 2010 sported a cabin that slavishly emulated the best the Europeans had to offer, mostly Mercedes-Benz. The Mercedes homage went as far as copying exactly the German-maker’s door-mounted seat control switches. Likewise, most knobs and switches looked familiar–which is to say, looked like they were lifted from other cars.

That’s changed for ’14, and in a surprising way. Hyundai designers have backed away from the German design love, and have given the Equus a subtler, more muted luxury feel. I’d like to say the car looks more like a Hyundai now, and I mean that as a compliment.

Also updated, and of vastly more importance to me, is the suspension. If one was going to wag a finger at Hyundai engineers, it would be for their seeming inability to design a car that both rides and handles well—at least by luxury-car standards.

Every current Hyundai rides and handles just fine, but no Hyundai does both things very well…and nowhere near as well as those German cars the Equus was designed to emulate.

Well, this year the Equus gets closer. It’s no Mercedes-Benz S-Class, but this big Hyundai now handles very well, and rides pretty well, too.

It’s at the fringes of ride control that things still get dicey. A deep pothole still registers with a clumsy thud that you’d never hear in a car bearing the three-pointed star, and there’s a periodic awkward moment after larger road imperfections during which the Equus seems to be weightless—sort of an old-school Buick float, but less wallowy.

Equus is the peer of all comers in the power department, however. The splendid 5.0-liter V8 is all about smooth torque, and the excellent 8-speed automatic transmission always seems ready to tap that muscle with silken finesse. Power from a stop is more than ample, and passing power immediate and prodigious.

Our loaded Ultimate came to almost $70,000, which sounds like a of money, but it’s a price that allows the Equus to play in a space almost without competition. The big sedans from Germany all hover around the $100,000 mark, and the large sedans from domestic makers don’t come close to these prices or equipment levels at the top end.

Indeed, just one car stands out as direct competition for the Equus, and that’s the Cadillac XTS, which, in Vsport mode, matches the big Hyundai very closely in price and performance. For a comparison of two sedans, click here.

Ultimately (pun intended), the updated Equus comes much closer to being the car Hyundai wants it to be. It’s arguably good looking, luxurious, sporty enough, and packs a serious punch when the throttle is tapped. No, it’s not as good as an S-Class, or BMW 7-Series, but it’s also $30,000 less expensive. For high-end intenders looking for an interesting combination of anonymity value, the Equus make sense.

Read Cadillac versus Hyundai: The $70,000 Battle No One Saw Coming here.