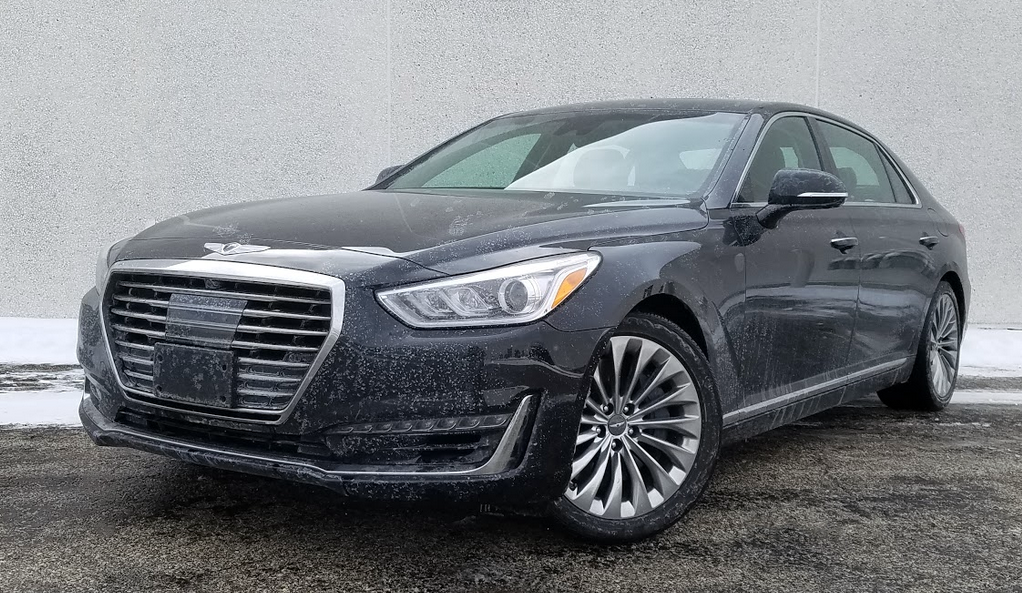 If the plan for the new line of Genesis G90 luxury sedans was to make it tough for prospective customers to single out a clear-cut choice based on price and equipment, then congratulate whoever made that plan. It worked.

The V6 3.3T and V8 5.0 models come equipped nearly the same save for their engines, and there are no options other than the choice of all-wheel or rear-wheel drive. Starting prices are close enough that an AWD 3.3T—with the $2500 premium for its more complex driveline—costs $900 more than a rear-drive 5.0. 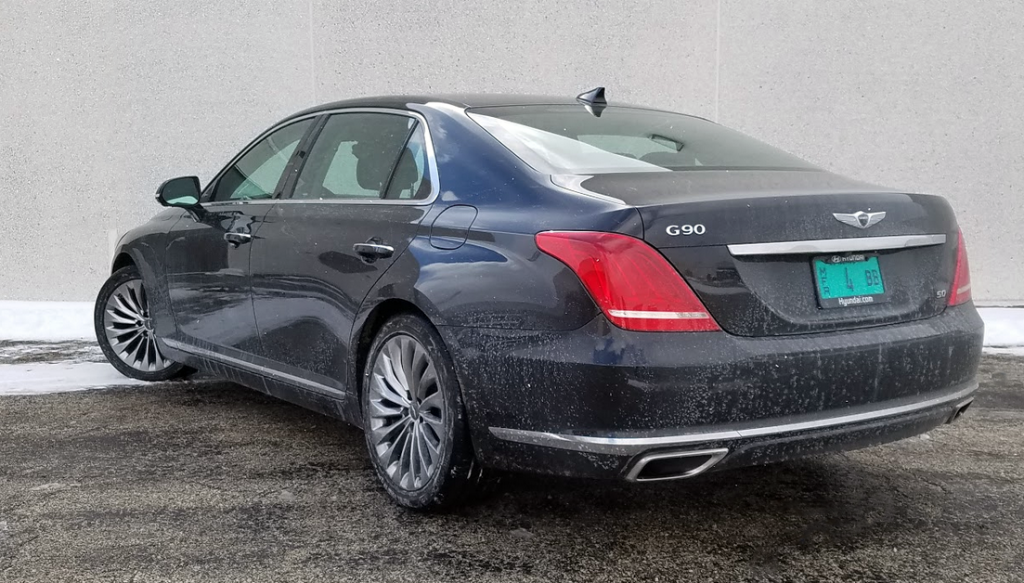 Though the Hyundai-built Genesis is a newcomer to the premium large-car field, where it’s in the august company of brands like Mercedes-Benz, BMW, Lexus, and others, it is Consumer Guide®’s 2017 “Best Buy” choice in the class. The G90 does a credible job of matching those established competitors, and what it currently lacks can be overlooked considering its “gentler” pricing.

The bigger engine isn’t the only thing that separates the Genesis 5.0 from the 3.3T—V8 models add LED headlights, rear vanity mirrors, and power-adjustable ventilated rear seats with memory settings—but it certainly is the essential thing. Or at least it should be; even making this choice may come down to a coin flip. The V8’s 383 lb-ft of torque are only seven more lb-ft than the turbocharged V6 generates. Furthermore, the 5.0-liter V8 hits its torque peak at 5000 rpm, further up the dial from the 3.3T’s peak point. As a result, standing-start acceleration feels about the same with either engine. Fortunately, that is snappy. However, the V8’s 420 horsepower (a jump of 55 from the V6) make the G90 5.0 feel stronger on the highway for easier cruising and passing.

Interior styling is stately and reserved, and the materials and finishes give up very little to the G90’s significantly more expensive class rivals. The rear seat offers ample stretch-out space, even for big and tall folks.

Oddly, though, the V8 doesn’t demand the expected pound of flesh from fuel economy—or at least it didn’t when this reviewer drove CG’s 5.0 test car. He covered 216 miles, with 45 percent in city-type driving, and averaged a surprising 20.3 mpg. That was almost three full mpg better than he saw when wheeling a G90 3.3T for nearly the same distance, albeit with more city driving. Indeed, the EPA estimates for the V8 of 16 mpg in the city, 24 mpg in highway driving, and 19 combined are near matches for the V6’s respective 17/24/20 ratings. Note that the manufacturer’s stated horsepower figures for both engines are with premium gasoline coursing through the direct-injection induction system.

Regardless of which G90 a buyer selects, driving dynamics and comfort are virtually the same. The ample wheelbase and adaptive suspension with electronic damping control enable a cushy ride, though the suspension might not do quite the snappy job of settling itself over bumps or in corners that some of its higher-profile competitors do. Easy—but not flabby—steering gets a little better when the “Intelligent Drive Mode” selector is punched into “Sport” mode. (Intelligent Drive Mode modifies throttle input, shift points, and steering behavior for a marginally sportier feel or to maximize operating economy.) 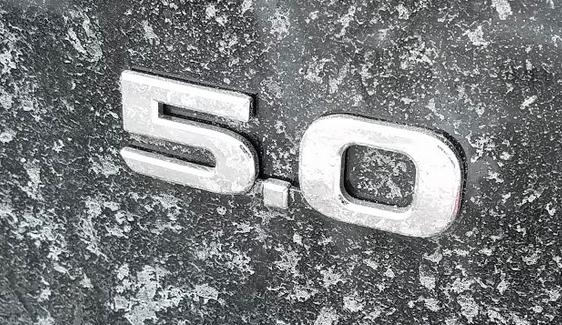 A small 5.0 emblem on the decklid is the only external clue separating V8-powered G90s from their V6 kin. (Our tester arrived during Chicagoland’s last snowstorm of the season, hence the road salt here.)

The Nappa-leather seats are extremely comfortable, and are complemented by leather-covered dash and door panels. Generous swaths of wood are found on the dash, console, doors, and backs of the front seats. There’s no lack of leg- or headroom in either row, and rear seating for three adults—or, as this tester discovered, an upholstered chair with arms—would not pose a problem. Doors open wide for easy entry and exit. In motion, the G90 is commendably quiet.

Controls are legible and handy but Genesis couldn’t resist falling prey to the central “multimedia controller” craze running rampant through the historic big-dollar brands. Inputting audio settings is a process of twisting, nudging, and tapping to select and save stations, and for some reason choosing satellite-radio stations is done a little differently than it is for terrestrial stations. At least the audio and navigation displays register well on the 12.3-inch display screen. Front climate controls reside on a bank below the screen with rotating dials to set temperature but numerous push buttons for other functions. Rear-seat passengers get their own audio, climate, and seat-heating/cooling controls in the pull-down center armrest.

Cabin and trunk storage are the same in any G90. Passengers have access to a big glove box and a split-top console box that houses a USB charge port. Input ports for other device are found in a covered bin on the console. Two covered cup holders are available to front-seat passengers. All doors have long, narrow pockets, and hinged pouches are attached to the backs of the front seats. The rear armrest incorporates a covered storage bin and a pair of pop-out cup holders. The roomy trunk further benefits from a bit of organized space under the floor. Rear seats do not fold but a central pass-through handles long objects.

About the only thing the G90 doesn’t come with is an obvious choice of which one to buy.

The G90’s generous 124.4-inch wheelbase is apparent in the profile view, as are the extra-large rear door openings.