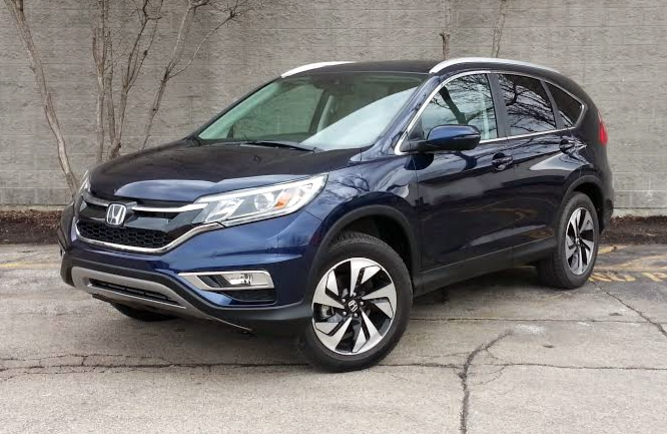 The not so good: Rough idle, engine noise during acceleration

The Honda CR-V continues to be an eminently likable choice for shoppers in the market for a compact sport-utility vehicle. To a track record of Honda dependability, the 2015 CR-V delivers new styling, powertrain changes, and a number of added safety technologies. There’s a new line-topping trim level too. 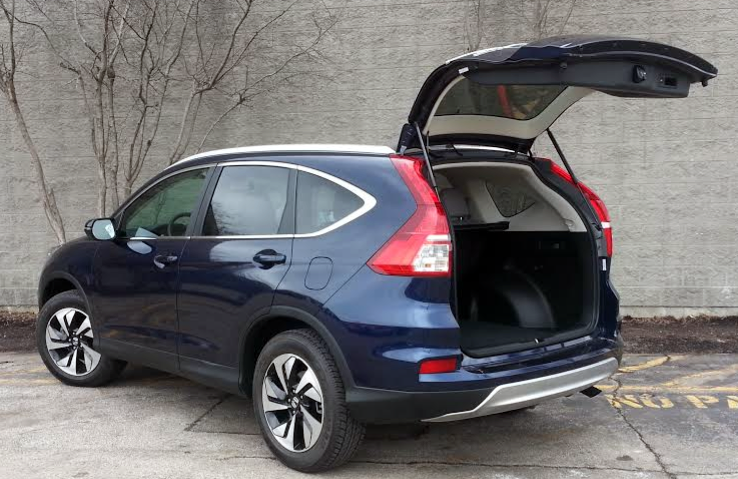 It was the premium Touring model that Consumer Guide® tested, an all-wheel-drive model no less, with a starting price of $32,770. Buyers can save $1250 by picking a front-wheel-drive CR-V Touring but any way you slice it, a CR-V with all of the best and newest features is going to run at least $32,000 delivered. That’s because Honda doesn’t offer stand-alone options, so buyers who are in for a penny are really in for a pound. 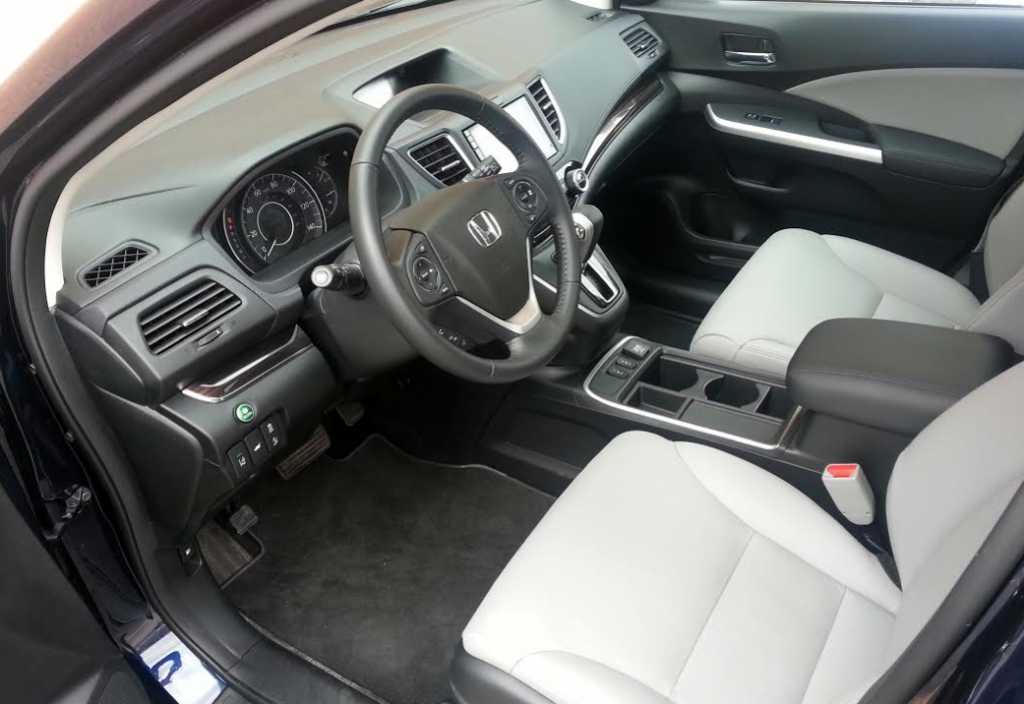 There’s plenty of space in the CR-V’s front row.

Regardless of price, all CR-Vs are motivated by a 2.4-liter dohc 4-cylinder engine that makes 185 horsepower. Honda’s tinkering with the variable valve timing allows peak horsepower and torque to be reached at lower rpm than before, and direct-injection is employed for more efficient use of fuel. A continuously variable transmission (CVT) replaces the stepped-gear 5-speed automatic installed previously.

The CR-V engine is prone to a rough idle, and it is a little noisy under acceleration. There’s no denying that it is peppy, though it seemed to this driver to be somewhat constrained by the CVT. AWD-equipped models are rated by the EPA at 26 mpg in the city, 33 mpg on the highway, and 28 combined—each 1 mpg less than front-drivers. This tester covered 124.3 miles in CG’s sample car. With 59 percent of those miles under city conditions, he averaged 25.6 mpg.

The ride is good, and handling is easy. CR-V’s all-wheel-drive system incorporates what Honda calls the Intelligent Control System, which is designed to sense loss of traction and respond by transferring power to the rear wheels. 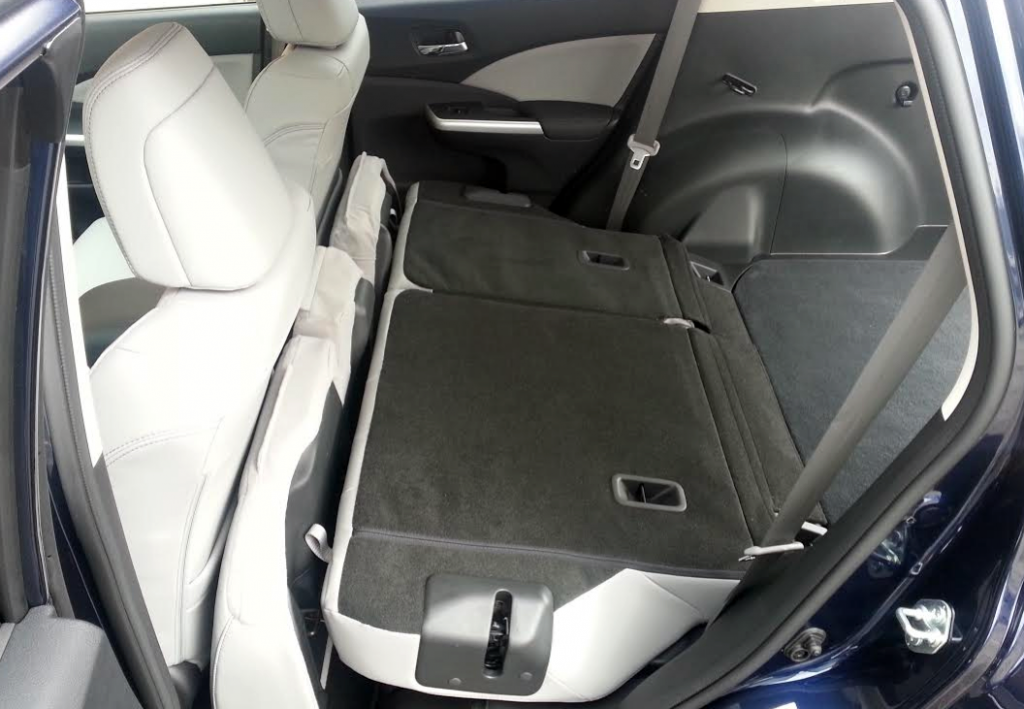 As for accommodations, there’s fine front-passenger room with a good view of the road and comfortable seats. Rear seats are perhaps a little less padded, but it will hardly feel like you’re undergoing interrogation sitting back there. Depending on how much leg room front-seaters take up, adult passengers in the rear can have comfortable leg room. Head room is generous front and back, even with the sunroof. Visibility is pretty good except at the rear corners, where the roof shape intrudes a bit.

The Most-Powerful Small Crossovers Under $30,000

The dash and much of the door surfaces are dressed in what, technically, could be considered soft-touch material—a grained plastic with almost no padding underneath. A dollop of light-gray material that matched seat color was in the center of each door, and door arm rests and the console-box cover are vinyl-covered and cushy. The leather-trimmed seat surfaces were pleasant. Controls were easy to see and use. Even before you get to the Touring level, the CR-V features a 7-inch touchscreen display, voice recognition, satellite radio, and HD radio. There was nothing too complicated about working the audio and navigation systems via the display screen. Separate dual-zone climate controls laid out below the screen use rotating dials to set temperature; a small array of push buttons governs functions like fan speed and vent selection.

Cabin-storage space is so-so. The glove box is big inside, but the console box is small, and a considerable amount of what space there is is taken up by digital-media inputs. There are some shallow surface trays on the console, and configurable dividers in the open cup holders help to tailor the space. Door pockets in front aren’t very long, but have a bottle-holder space. In back, door pockets are very short, pouches are attached to the backs of the front seats, and dual cup holders are found in the pull-down center arm rest. 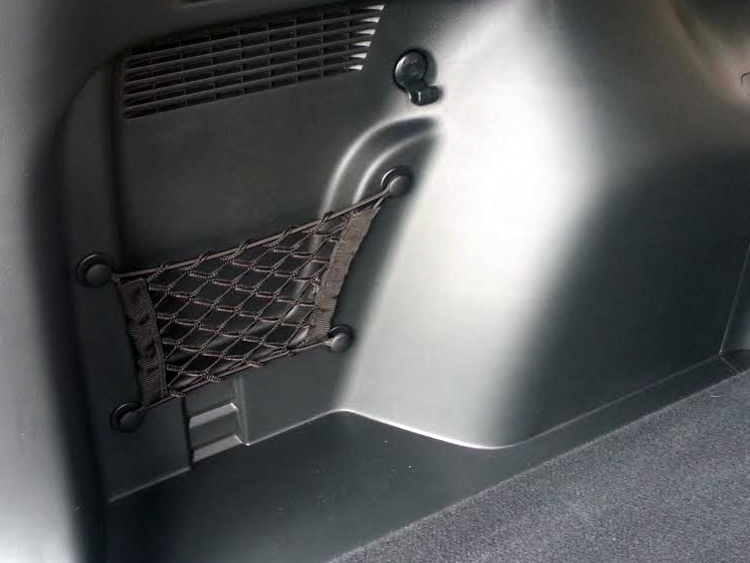 A handy small-item storage net is found in the cargo area.

At least rear cargo space is quite good side to side and front to back. Four tie-down hooks are included. There’s a little bit of a lip, so easy slide-in/slide-out loading isn’t possible, but the opening is wide. Rear seats fold 60/40, and when they do, they provide a smooth transition from the cargo hold. Rear seats can be folded by the pull of a cord on the cushion or via handy release levers in the sides of the cargo compartment. Rear-seat cushions pivot forward to leave space for the seat backs to fold nearly flat—though at a slightly higher level than that of the cargo-bay floor.

In the CR-V, things generally work well and feel substantial. There are quite a few price-and-equipment gradations on the way up to the Touring, but even if you do spring for the total program, you may feel that you’re getting what you paid for.