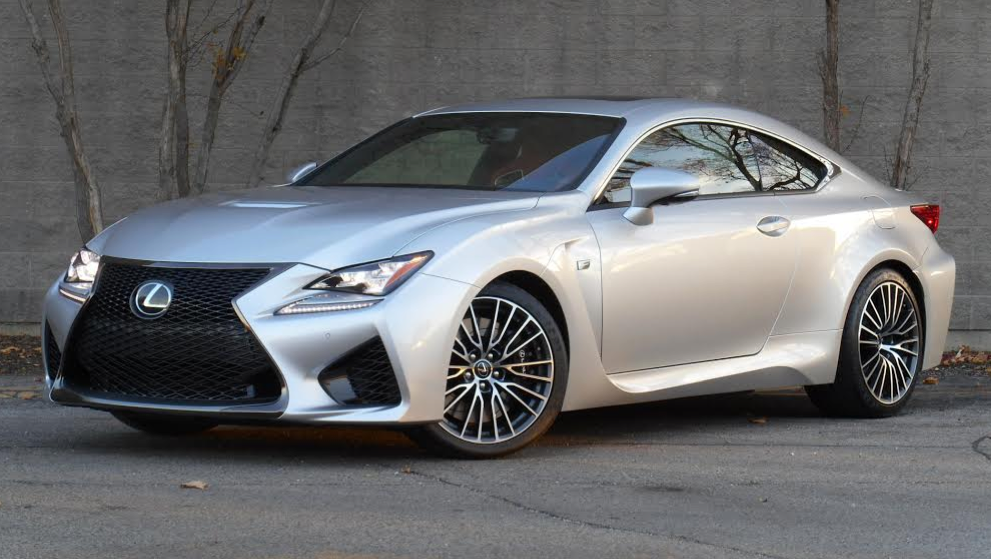 The good: Though firm, the ride is never harsh

The not so good: Touchpad control interface can be finnicky

Click here for more information about the entire Lexus lineup

The new RC comes two ways: in “base” form with a 306-horsepower V6 and a choice of rear or all-wheel drive, and the F with a 487-horse 5.0-liter V8 and rear-wheel drive that is the subject of this test. 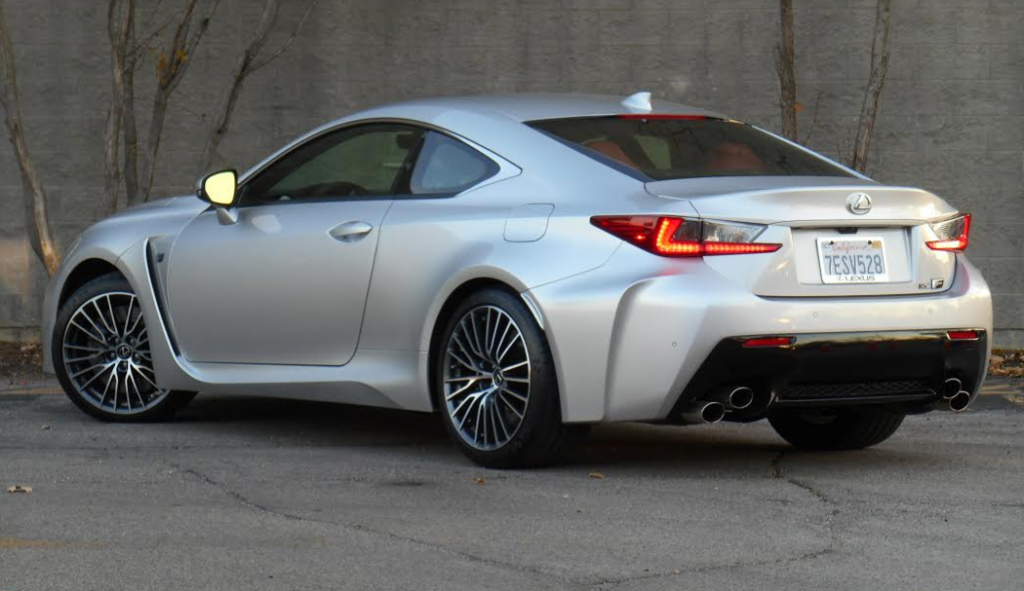 There’s more than one way to drive this hottest-performing RC, thanks to the standard Drive Mode Select system. “Normal” mode delivers a balance of fuel economy and engine performance, while “ECO” mode moderates throttle response, power output, and climate settings for mpg-oriented operation. When it’s time to get racy, however, the console-mounted selector can be rotated to the “Sport” or “Sport S+” modes. Sport alters the powertrain for quicker throttle response, while Sport S+ also modifies steering and suspension behavior.

This tester spent the majority of his 159.9-mile stint with the car in ECO mode, but there was no mistaking the clear upgrade in throttle response and the higher-rpm shift points of the 8-speed automatic transmission when Sport or S+ were selected. Then the naturally aspirated dohc V8 really came to life—even the muscular (but not overwhelming) exhaust note seemed to grow a little more hair. Lexus claims 4.4-second 0-to-60-mph capability and a 167-mph top speed. 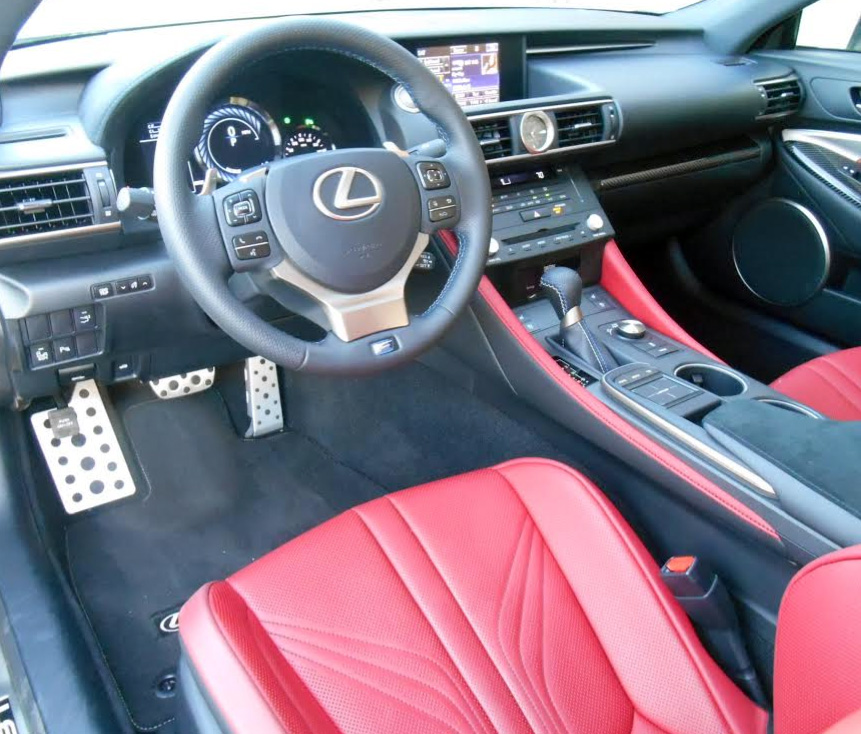 RC F owners will, as might be expected, pay for this at the pump. Even hanging in ECO the majority of the time, this driver averaged a middling 17.49 mpg while commuting in the test car. At least that pretty closely approximated the EPA expectations for the RC F, which is rated at 16 mpg city, 25 mpg highway, and 19 mpg combined. Fifty-five percent of yours truly’s driving was under city conditions.

Even backed down out of the high-performance modes, the RC F has a firm ride, but one that’s well damped. The “usual” surface imperfections were passed over with an audible clack, but they caused little disturbance through the car’s structure and didn’t jolt occupants. Cornering lean was close to nonexistent. Steering was controlled and highly responsive, and certainly firmed up a bit more in the Sport S+ setting. The Brembo ventilated discs provided excellent easily modulated stopping power. Consumer Guide®’s test car was equipped with the Torsen limited-slip differential that’s standard in RC Fs, but a Torque Vectoring Differential that distributes torque between the rear wheels throughout a turn is optionally available for folks with canyon carving on their agenda. 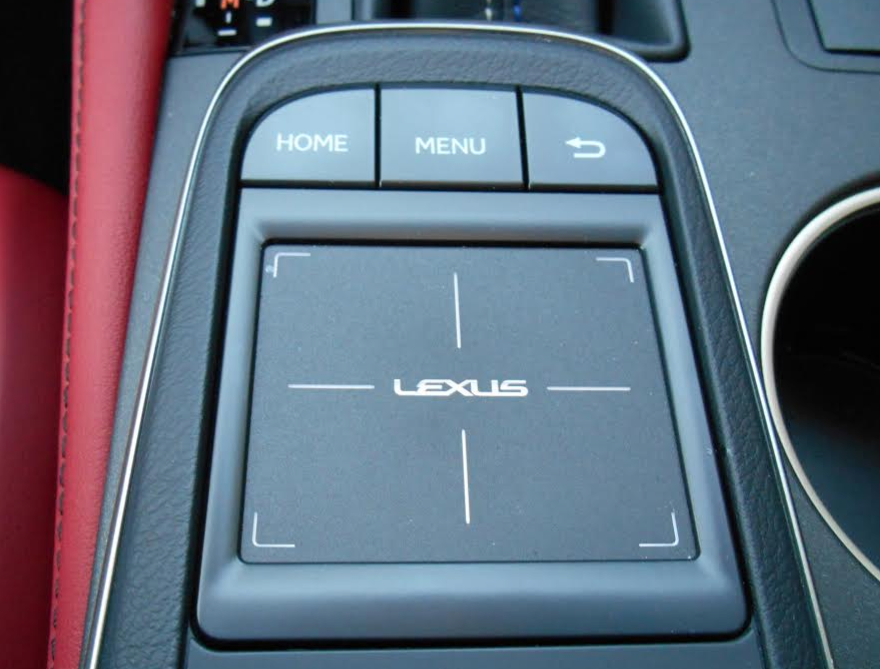 Novel touchpad interface is generally effective, though it can prove finnicky and difficult to manipulate while traversing rough surfaces.

The window sticker on CG’s test car was puffed up to $73,815 thanks to the delivery charge and a number of options headed by two substantial packages. The Navigation/Mark Levinson group added an enhanced 17-speaker audio unit, voice-activated navigation system, back-up camera, Enform app suite, and console-mounted touchpad controller for comfort-and-convenience functions. The Premium Package provided heated and ventilated front seats, driver’s-seat memory controls, carbon-fiber interior trim, a blind-spot monitor with rear cross-traffic alert, parking assist, rain-sensing wipers, and reverse-tilt autodimming exterior mirrors. Frankly, the fact that things like leather upholstery (another option on the test car) and the rearview camera cost extra in a car priced like this is a little surprising.

The touchpad control replaces the mouse-enabled Remote Touch Interface for adjusting audio, climate, and other systems that Lexus has used in some of its cars lately. Screen graphics look the same, but the pad allows for finer—though no less attention-grabbing—operation of these systems. A drag of a fingertip across the surface of the touchpad will highlight on-screen areas such as radio frequencies, and a press on the pad will select or activate a desired setting. (The pad also has smartphonelike pinch and swipe functionality.) It’s easy, however, to overshoot a desired setting. Plus, the pad is located at a place on the console where it’s easy for the driver’s resting right hand to accidentally contact the pad and inadvertently move the “cursor” off a desired setting.

The touchpad is necessary for making all audio settings. Climate adjustments can be made on the screen or through external controls on the console.

Front-seat occupants sit low in firm, very grippy seats. Some will find that these seats narrow at a place where they personally begin to widen. This driver had all the head and leg room he needed, and entry and exit weren’t too challenging. The back seat is no country for old men—or most any other adult, either. There’s scant leg and knee room (unless someone quite short is occupying a front seat), and head room melts under the sloped roof. A console runs between the two bowllike cushions. Motorized front seats track forward to make some attempt to ease rear-seat entry and exit, but anybody who pushes their way out of that compartment might almost expect to receive a spanking from an obstetrician–it’s that tight.

There’s a luxury feel to much of the interior, with suedelike surfaces above the instrument cluster, on the door panels, and rear side panels. Different soft-touch material is found on the door arm rests and the cover to the central console box. The console box isn’t all that deep, however, and it contains plug-in points for electronic devices. The glove box isn’t overly roomy, but there are long door pockets. In the rear are pouches on the backs of the front seats and two covered cupholders in the console. While not tall, the trunk is flat and wide, and will hold more than just minimal luggage for 2. Four cargo tie-downs are built into the floor, and there’s a ski pass-through into the rear seating area.

Less than 10 years ago a car as fast and capable as the Lexus RC F would have been considered a super car. Today, it’s merely fast, and impressively handy with a corner or on-ramp. 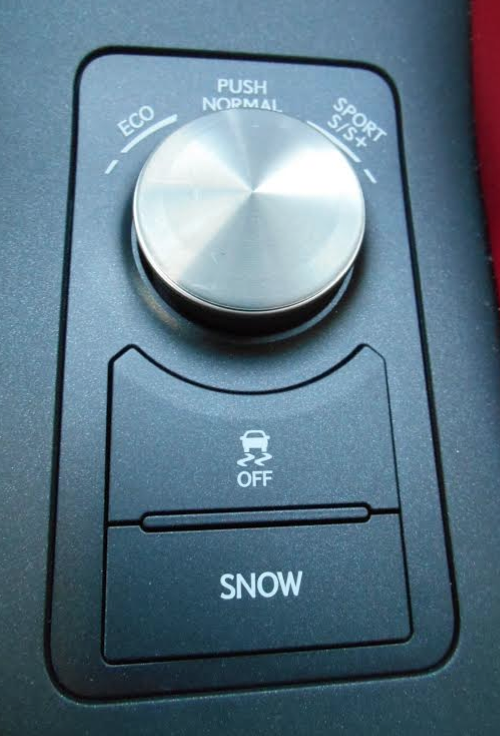 Sport and Sport + modes ratchet up driver involvement by affecting steering, transmission, and stability-control systems. Note that Snow mode is no substitute for all-season tires.

Compared to the IS F sedan, which this new über coupe effectively replaces, the RC F feels less high-strung and more composed on the road, not that the sedan was in any way skittish.

The RC F is best thought of as an executive express, a sort of Corvette alternative boasting similar power, a much nicer cabin, and meaningfully less extroverted exterior.

And speaking of executive expresses, kudos to Lexus for two key RC F achievements: First, the RC F looks the part of fastest car in the lineup, but not at the expense of a dignified visage. Sporting unique bodywork and a completely new rear-end cap, the RC F manages to look like a serious track star without the vents, diffusers, and other tack-on elements that can make good cars look silly.

Secondly, thank you Lexus for dialing back the exhaust note during routine commuting. I welcome the baritone explosion that accompanies full-throttle on-ramp blasts, but that same level of exhaust noise in traffic quickly becomes an irritant, as it does in V8 versions of the Jaguar F-Type.

Note: Folks in the Snow Belt intent on driving their RC F on a daily basis through the winter months will need to purchase all-season tires for their cars. This tester learned first hand how limited this car’s grip can be on its standard rubber in two inches of fresh snow.

Were I a man of means, an RC F would find space on my cool-car short list. It’s a comfortable commuter, it’s fast and capable, beautifully finished inside, and reasonably priced relative to its competition.