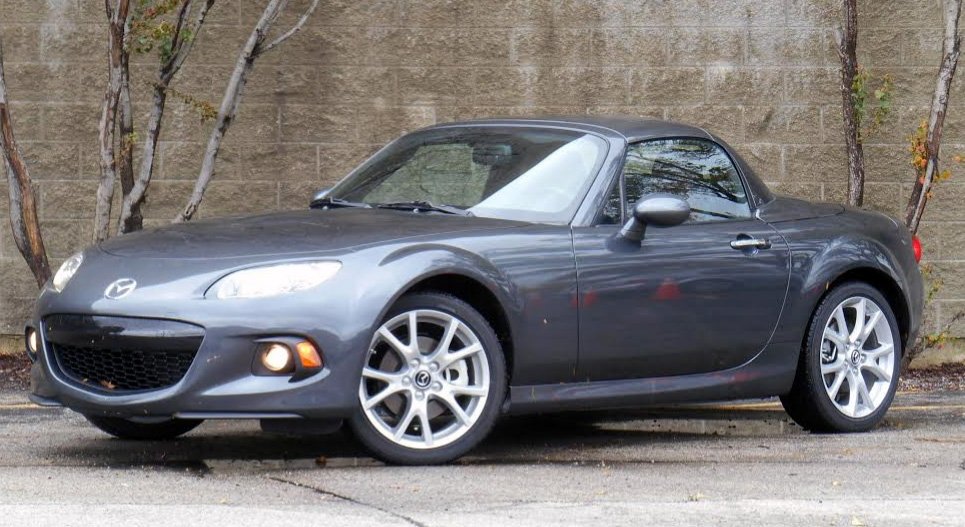 The great: A joy to drive

The not so good: An effort to get in and out of, limited storage space

The Mazda Miata is marking time until 2016, when a new iteration of the little roadster hits the market. Since the Miata’s 1989 debut, Mazda has improved it dynamically, and has plushed it up for the benefit of those who want to be pampered a bit, but the essential fun factor continues to shine through.

If the Miata has lost anything over the years, it is some of its reputed affordability. Early ones were an indisputable fun-in-the-sun bargain. But those aforementioned improvements and luxuries are going to add up. Especially the luxuries. The top-of-the-line 2015 Grand Touring power-retractable-hardtop model that Consumer Guide® tested started at $29,450 and bottomed out at $32,285 with options and delivery. 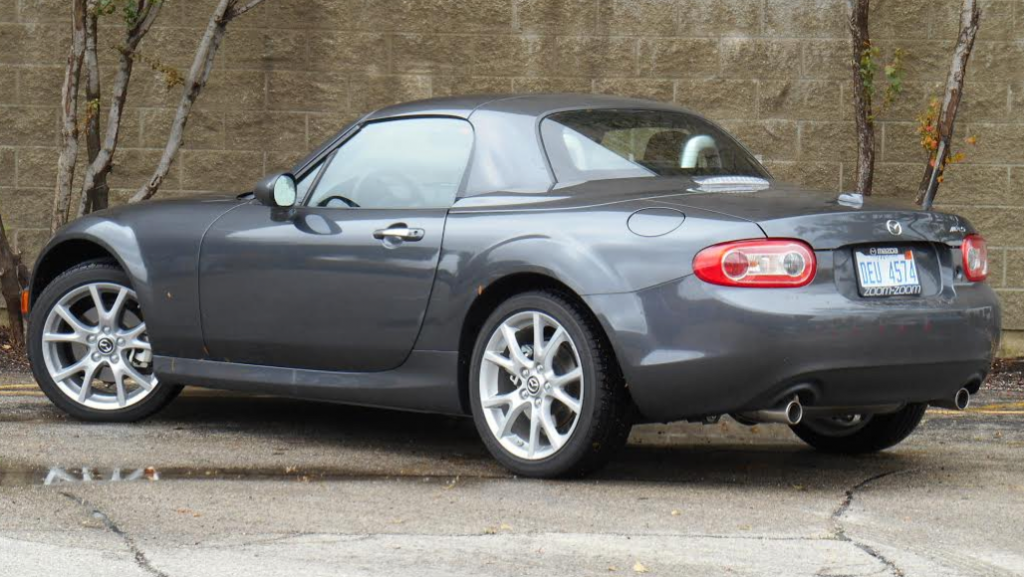 Compared to the retractable-hardtop Club model that starts about $800 cheaper, the Grand Touring stands out by virtue of its chrome headlight bezels, body-color top and exterior mirrors, chrome-accented door handles, split-five-spoke silver alloy wheels, automatic climate control, automatically dimming rearview mirror and universal garage-door opener, heated leather seats, leather-wrapped parking-brake handle, dark-gray dash trim panel and silver seatback-bar accents, and 7-speaker Bose audio system. Opting for a manual fabric top cuts the range of starting prices from $23,970 for a base Sport to $27,550 for a Grand Touring. In the key mechanical areas, all Miatas are essentially the same but for the Sport, which comes with 16-inch wheels and a 5-speed manual transmission as standard.

The sole powerplant is a 2.0-liter dohc 4-cylinder that makes 167 horsepower and 140 pound-feet of torque when paired with a manual transmission. (With the optional 6-speed automatic, output peaks at 158 horsepower.) Though maybe not on the scale of the old Honda S2000, the Miata still likes to rev fairly freely. It’s energetic from a standing start and plenty ready to charge down on-ramps or pass on the highway. Starting is greeted by a warm classic small sports-car purr that sounds great—until it becomes more of a roar that mixes with wind and tire noise at about 60 mph or so for a not-that-pleasant song of highway, even with the solid top up. 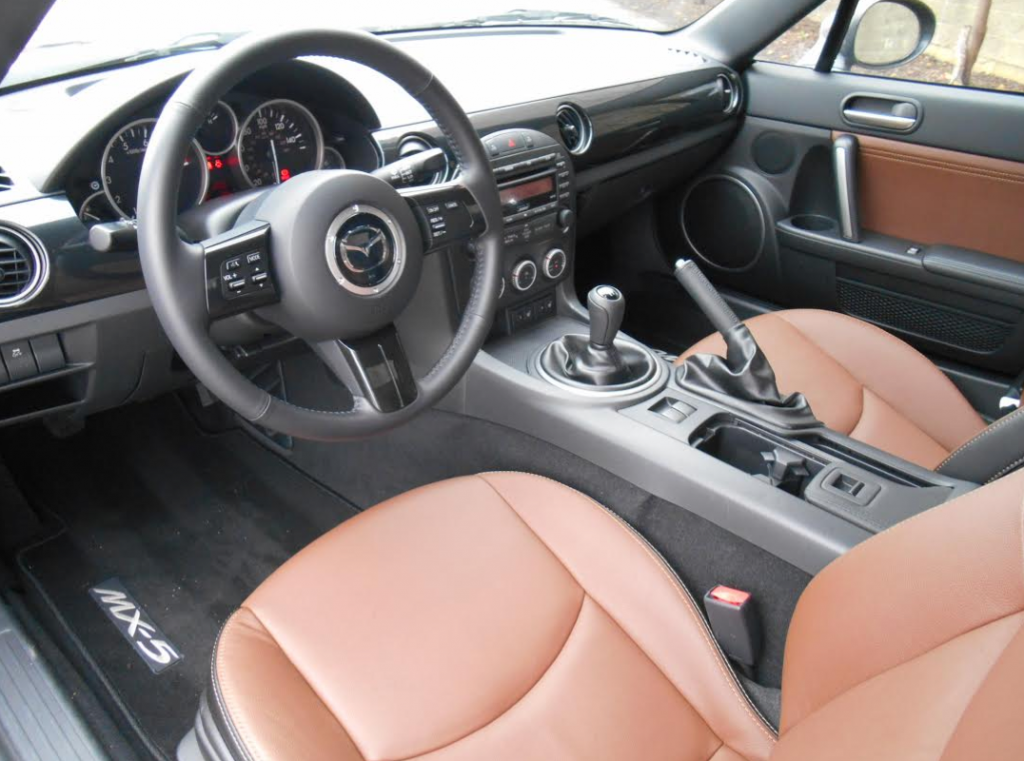 The MX-5 Miata cabin is a little old-school, meaning the controls are simple, and surface materials mostly hard plastic.

Our test car was equipped with the Grand Touring’s standard 6-speed gearbox. The shifter may be the “short-throw” unit that Mazda says it is, but the one in our test car came off as a little notchy and required a bit of force on most shifts. We’ve driven other Miatas that had a joysticklike ease to rowing through the gears. This tester can’t complain about the car’s fuel mileage, though. In 119.9 test miles, 67 percent in city conditions, he averaged 23.34 miles per premium-fueled gallon, which is right up against the EPA combined-mileage estimate of 24 mpg for this powerteam. EPA city/highway figures are 21 and 28, respectively.

One of the two option packages on the test car was the sport-tuned suspension that also includes tauter Bilstein shock absorbers and a limited-slip differential. This driver’s expressway commutes and city-street driving didn’t allow for much tail-wagging, but even then there was no mistaking the responsive steering, well-controlled body lean in turns, and sure braking that make the Miata fun to drive. No Miata is especially cushy in the ride department, and the firmer setup in our test car was susceptible to cabin-rocking jolts over pavement irregularities. The standard wheel-and-tire complement on most ’15 Miatas is alloy wheels shod with 205/45R17 performance tires.

Seating is low, which some passengers may find a little difficult for entry and exit, but seats are comfortable, and an adjustable steering column and flat-bottom steering wheel accord drivers a bit more room to work with. The truly long-legged may run out of leg and head room, but most everyone else will be able to settle in. Top-up over-the-shoulder visibility is blunted (hey, it’s a convertible), but straight-back visibility isn’t bad.

The Spicy Mocha trim on the seats and center of the door panels added a dash of warmth to what would have been a claustrophobic black hole otherwise. The age of the current Miata may be showing a bit through the lack of soft-touch materials on dash and doors, save for those Spicy Mocha patches. With the central latch manually released, the power top opened and closed quickly, and without fuss. Controls are easy to reach and operate, but some features that motorists may be starting to expect in similarly-priced—or even cheaper—“sensible” cars either cost extra in the 2015 Miata (Bluetooth connectivity, satellite radio) or aren’t available at all (navigation). Neither is there much in the way of interior storage or trunk capacity.

Perhaps some of these issues will be addressed by the upcoming Miata. If so, let’s hope not at the risk of the Mazda roadster’s premise of simple, affordable fun.

In many ways, the Miata is in a class by itself. Sure, there are other sporty little ragtops – the Mini Cooper springs to mind – but none invoke the spirit of a classic convertible sports car quite like Mazda’s iconic Miata.

And maybe it’s this lack of competition that has allowed the car to get a little long in the tooth. John mentioned the notchy shifter – which I noticed as well – but I racked it up more to the fact that our test car had but 1000 miles on it rather than that the transmission had taken an evolutionary step backward. My suspicion is that it will get smoother as the odometer reading rises. 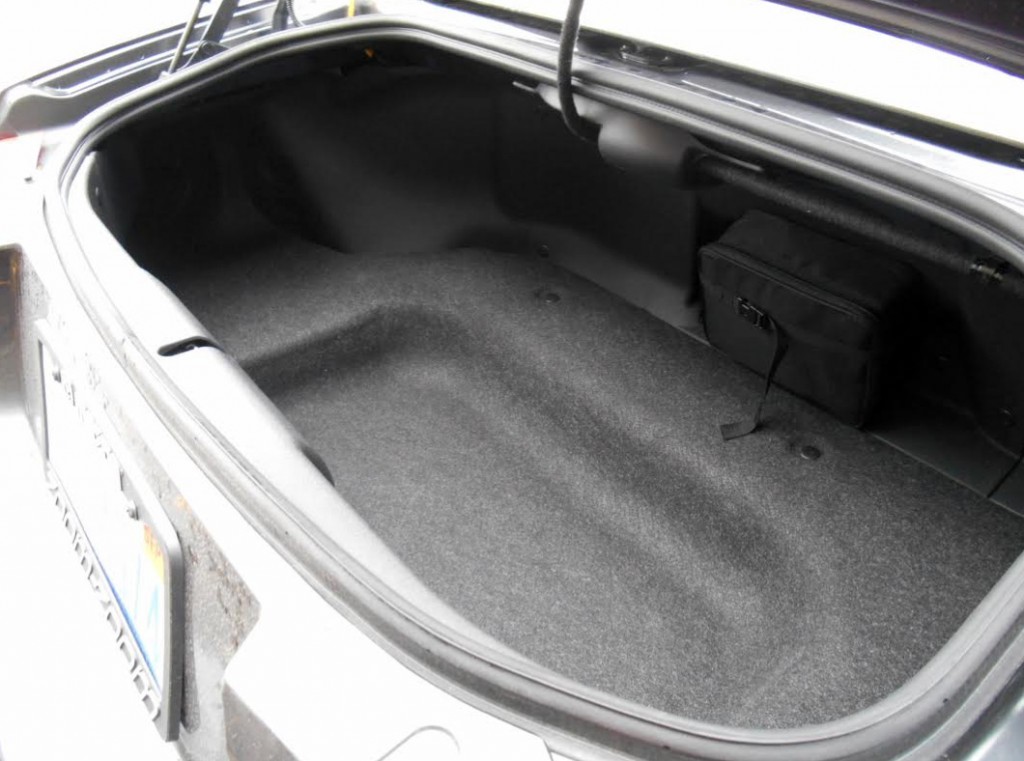 The MX-5 Miata is a little light on in-cabin and in-trunk storage space.

But the low mileage wouldn’t have affected the engine, at least when it comes to smoothness – or more specifically, lack of same. We had two other 4-cylinder test cars in at the time, and the Mazda’s mill stood out as being noticeably coarser than the others, though it was sufficiently peppy for the purpose.

One thing the low mileage might have impacted was fuel economy, but probably not by that much. John may have been happy with 23 mpg – on premium fuel – but that’s hardly impressive for a modern, lightweight 4-cylinder car. (This is something that will likely be addressed with the redesigned slated for next year, which will probably be built around an engine laden with Mazda’s effective SkyActiv technology.)

In other ways, too, the Miata is showing its age. Even inexpensive cars nowadays have nicer interior materials than the hard-plastic surfaces that dominate the cozy cabin. There was also no rearview camera, though visibility with the hard top was quite good to the rear corners (might be less so with the soft top), aided by the fact that there’s very little car sticking out behind the front seats.

One of the nice things about the Miata is its “dated” control layout. With the norm today being a touchscreen or joystick-controlled interface that too often demands mandatory multi-step procedures for simple adjustments, the Miata’s simple knobs, dials, and buttons are a refreshing “blast from the past.” Sad to say, this is something that will likely disappear with next year’s redesign.

Although the $32,000 sticker on our test Miata was a bit staggering at first blush, it’s important to note (as John did) that a base one starts at about $7500 less. The biggest chunk of the difference was the power-retractable hardtop – and the higher trim level necessary to have it as an option (where it adds about two grand).

When a redesigned model is known to be on the horizon, it’s always a tough call whether to go with the known (which may carry the added allure of discounts) or risk the unknown. And with the early onset of winter in many parts of the country, you may not be thinking “convertible” right now. But since the 2016 Miata is expected to go on sale in the first quarter of 2015, by next summer, the decision may have been made for you. Hit the showrooms this spring, however, and you may have your choice. In fact, it’ll really be the only time a Miata actually has any competition.