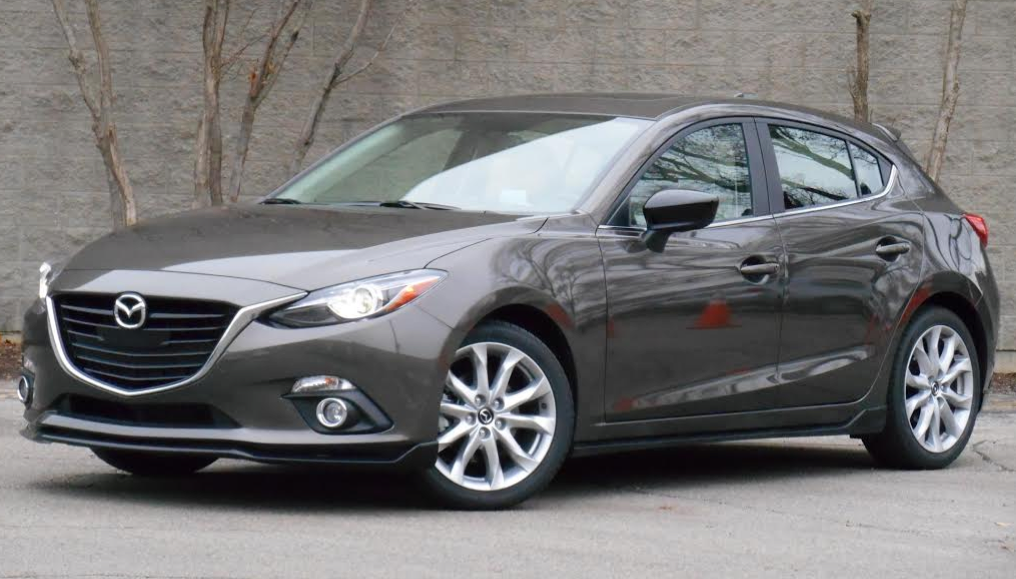 The not so good: Pricey options can drive up bottom line

Click here to check out the entire Mazda lineup

Do you want a lively, fun-to-drive compact with the prospect of 30-plus-mpg highway fuel economy? Mazda has a car for you.

Do you want a fairly luxurious cabin with lots of amenities for an as-delivered price clearly south of $30,000? Mazda has a car for you.

Do you want whiter teeth and a flatter stomach in just 30 days? Whoa! You’re on your own there. 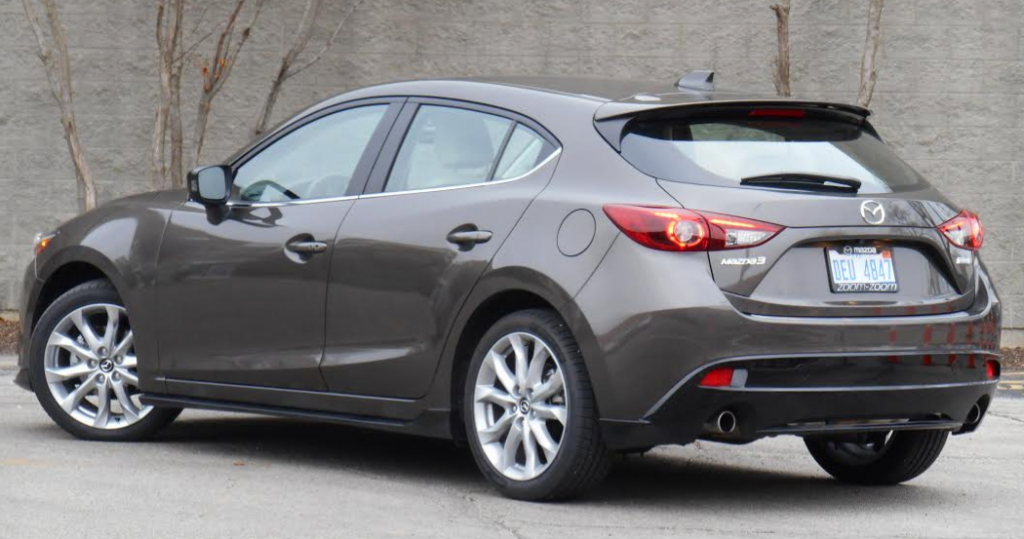 The $1750 Appearance Package included on our test car brings a front air dam, side sills, rear-hatch spoiler, and rear diffuser.

The 2015 Mazda 3 S hatchback that Consumer Guide® tested provided everything on the above list except the sex appeal. Better yet, it did so with few flaws to leaven the driving experience.

Positive impressions start by just sitting in the 3, where there’s nice room for front passengers, and a comfortable and attractive layout. Most versions come with soft-touch material on the dash and much of the doors, and red contrast stitching on leather-wrapped surfaces throughout the interior. Ours was a top-of-the-heap Grand Touring with sport seats trimmed in perforated leather. The light Almond color of the seat faces was reprised at the center of the doors and relieved an otherwise black interior.

Front head room is good, even under the power moonroof, but the roof shape shaves a little head room in back. Rear seats are about as comfortable as those in front, and there’s acceptable leg room for adults. For “emergency” use, a middle passenger (preferably a short one) will find sufficient seat padding and head clearance, but feet will have to straddle a central tunnel. 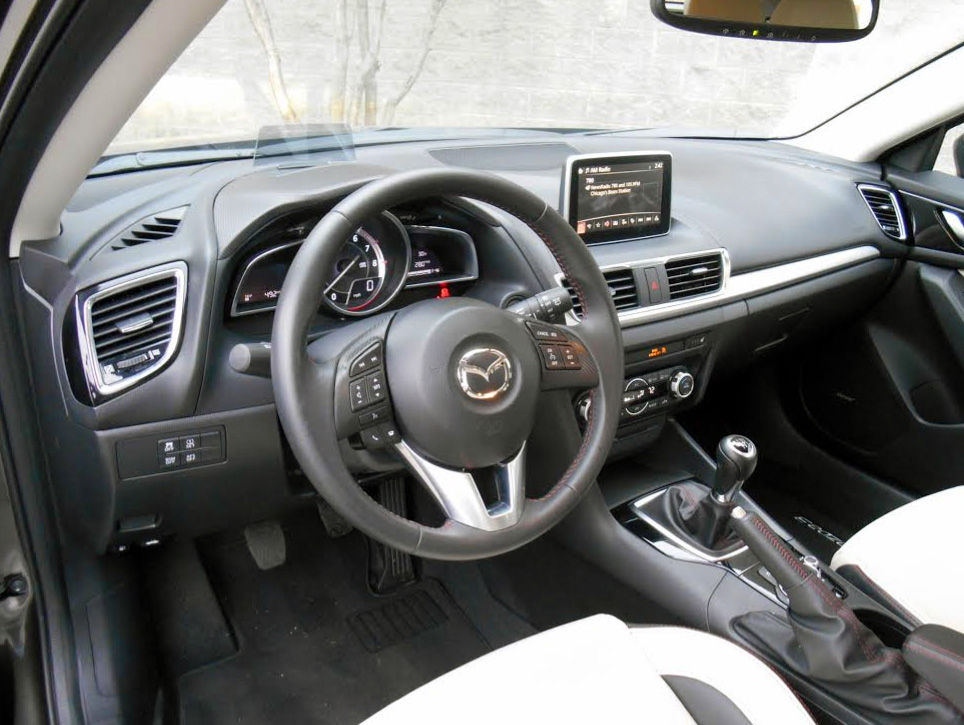 In Grand Touring trim, the Mazda 3’s cabin is finished in materials a grade above the class norm.

The rear hatch opens to reveal a flat cargo floor that will hold a couple suitcases or a fair amount of shopping “swag.” With the head rests removed, the rear 60/40-split seats fold almost fully flat to accommodate bigger hauls. Personal-item space is so-so, however. The glove box is not bad. The console has 2 open cup holders and a covered arm rest/cubby of modest capacity. This box also contains USB/power plug-ins, and a tray to hold a smartphone or other small digital-media device. Rear passengers are provided with pouches on the backs of the front seats and a pair of cup holders molded into the pull-down center arm rest. All 4 doors have slightly angled pocket “holes” that are, in effect, bottle holders.

Driving controls and instruments are sensibly laid out and easy to read. A head-up speed display shows on a little window that powers up from the top of the instrument panel. Included in the Active Driving Display that’s standard in Mazda 3 S models, it is a surprise for this class of car; the no-nonsense plunger trip-odometer reset above the tachometer is welcome in any car.

Climate settings can be adjusted off the center stack, but a twist-and-toggle dial is needed to summon audio, navigation, and other system controls on the 7-inch touchscreen. Circulating around the screens to select what you need is fairly easy to grasp in the Mazda—moreso than in the luxury cars that seem to want to impress you by confounding you with their central-control get-ups—but this is still the first step on a slippery slope. 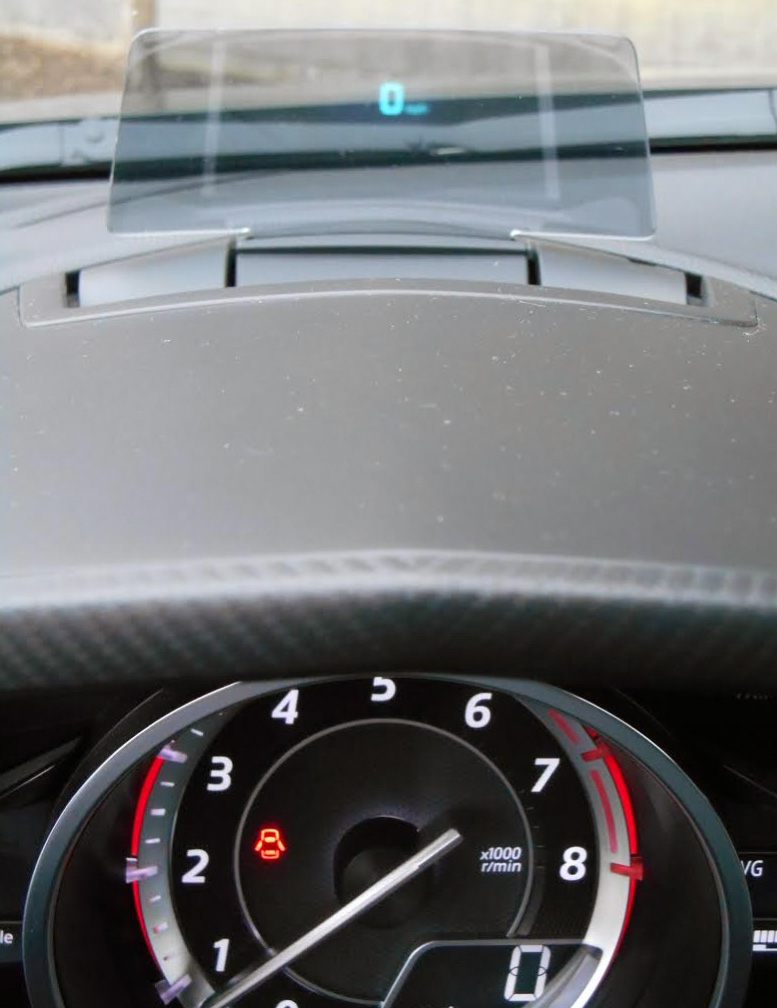 Heads-up display is a rare feature in the affordable small-car segment.

S-series Mazda 3s come with a 184-horsepower 2.5-liter dohc 4-cylinder engine. (Cheaper I-series 3s have a tamer 2.0-liter engine.) The 2.5 is an eager and fairly smooth powerplant, and the 6-speed manual gearbox in CG’s test car had nicely spaced ratios, and an easy-to-use shifter and clutch. Once on the go, the 3 delivers enjoyable steering, braking, and handling with well-controlled lean in corners. When it was time to fill up after a stint of 195.4 miles, this driver recorded 29.96 mpg—not so bad considering that he covered 61 percent of his miles under city driving conditions, and the EPA combined-mileage estimate for the 2.5 with stickshift is 29 mpg. (EPA city/highway figures are 26 and 35, respectively.)

Aside from the aforementioned powertrain and luxury touches, the Mazda 3 S Grand Touring is outfitted with, among other things, 18-inch alloy wheels, rain-sensing windshield wipers, heated power side mirrors, heated front seats, dual-zone automatic climate control, blind-spot and rear cross-traffic monitoring, a rearview camera, navigation system, Bose audio system, satellite radio, Mazda Connect infotainment system, and steering-wheel-mounted controls, all for $25,545. With options and delivery, CG’s tester topped out at $28,385, but much of that extra fee was tied up in a $1750 appearance package that wouldn’t fundamentally change the car if it weren’t there.

What the Mazda 3 S Grand Touring boils down to is a truly a fun-to-drive car with useful space, plenty of features, pretty good mileage, and a manageable price. That’s a good look on anybody.

What happens when you mix a Mazda 3 and an unlucky deer? 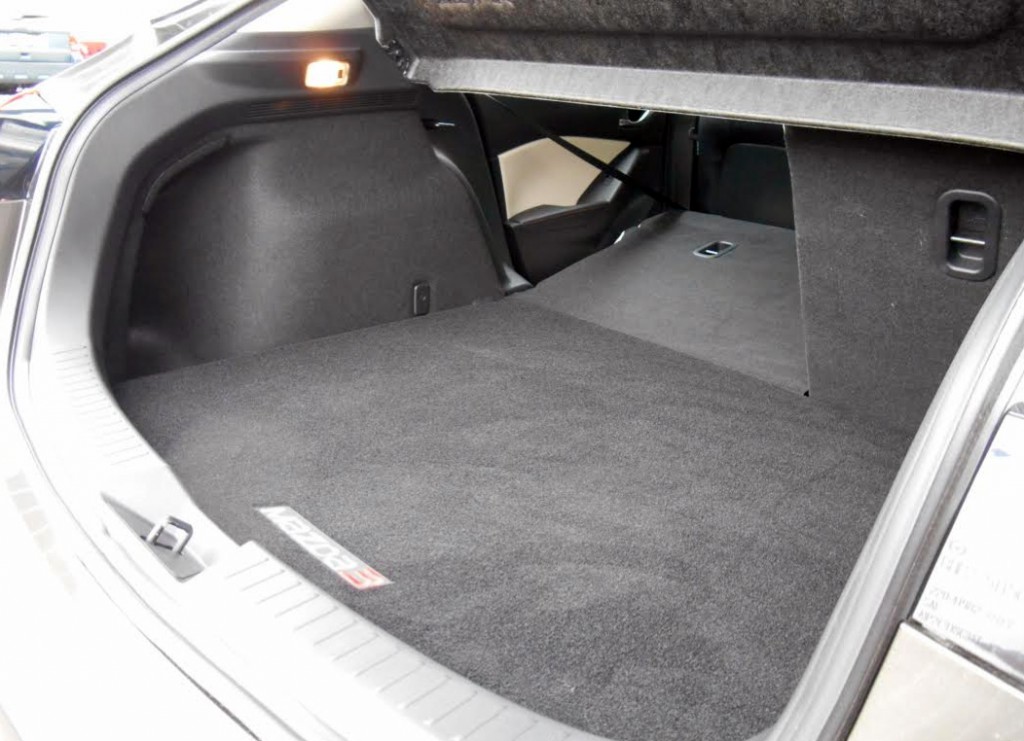 The Mazda 3 sees no significant changes for 2015 after its redesign last year. That redesign netted the 3 better fuel economy numbers, a host of new technology features, and significantly improved interior materials, but, in my book, gave up a little of the eager, nimble driving personality of the previous-generation model. Even though the new hatchback body’s cargo volume is better by the numbers that the previous model, the steeply raked rear roofline can make it tricky to fit large items. Most shoppers won’t mind these tradeoffs. The cabin, at least in the top-line Grand Touring trim of our tester, feels premium-grade, and fuel economy—a bit of a weak spot on the previous Mazda 3—is competitive as well. And, despite its slightly more subdued driving character, the 3 is still one of the most agile mainstream compacts around. If you’re looking for something a bit sportier than the class norm, but aren’t ready to step up to a performance variant such as the Honda Civic Si or Volkswagen GTI, an up-level Mazda 3 could be the perfect fit.