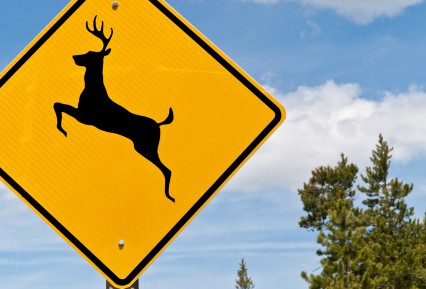 Tom Appel recounts hitting a deer, and the sad demise of one of our favorite long-term cars.

With spring upon us, we’re reposting Tom’s cathartic recollection of  his encounter with a bobtailed Michigan resident. The original story appeared in September of 2010.

The formula is pretty simple: Stationary deer corpse + Mazda 3 doing 70 mph = totaled Mazda 3. That’s the formula. Similar equations are tested and retested by thousands of drivers each year. The crazy part here is that the deer was already dead. I didn’t even get to kill it; only spread it, like Jif, over about 1000 feet of Michigan State Route 14.

Yes, I would have felt worse about actually killing something cute and furry, but at least the tragedy of taking an ungulate’s life would have taken some of the heat off me for totaling–yes, completely destroying–our beloved long-term Mazda 3.

By comparison, editor Damon Bell’s deer encounter about a year ago was less passive and less destructive. Damon managed to clip a deer with our long-term (and also beloved) Chrysler Town & Country. Like me, Damon was not piloting the first vehicle to hit the animal; he actually hit it second, though his victim was likely still alive.

Impressively, the Town & country suffered only cosmetic damage. Thus, Damon’s story includes a merciful act of euthanasia and a vehicle that wasn’t sent to the crusher. His story is way better than mine.

I, on the other hand, ran over an already dead deer. It’s not a compelling story, unless tales of vehicular destruction tickle your fancy. Quite simply, I was following a large SUV, a Tahoe or Yukon if memory serves, when a curled up deer appeared from underneath it. My first thought was, “Well, he drove over it.” I spent the next three-and-a-half seconds second-guessing my initial, and too casual, appraisal of the situation and looked for an alternative plan. I couldn’t swerve right–a car was already there. The shoulder to my left appeared too narrow. Realizing I was screwed consumed what little time I had left, and I hit the little fella squarely at about 68 mph.

The thud wasn’t especially loud, only gruesome, as I imagined that any woodland service for the poor guy was going to be closed casket. I mistook the subsequent noise as scraping; I thought I was dragging the deer under the car. I wish. The sound was actually the hiss of a fast-leaking cooling system. This second prognosis was quickly confirmed by the sickly sweet smell of antifreeze and a flashing low-coolant light on the instrument panel.

Driving a Bus Through Serbia

I got over to the side of the road as soon as I could. Not soon enough, as it turns out—more on this in a minute. This is when a calm sense of hopelessness settled in. It was about 10:30 at night. I was on a desolate stretch of road, walking distance from nothing, and I was more than 200 miles from my suburban Chicago home. At long intervals a semi would fly by, breaking the silence and rocking the mortally wounded hatchback. As an added bonus, my cell phone battery was down to two bars and I was without a car charger.

Then it hit me. Roadside assistance! Sure enough, the Mazda 1-800 number was as close as the glove box. The call was answered promptly by someone who was in a much better mood than I was. Unfortunately, Mr. Chipper immediately appraised my situation (marooned on the side of a busy highway) as “dangerous” and instructed me to call the authorities immediately—which I did.

Here’s a tip for all you youngsters out there: Know where you are before dialing 911. Our well-equipped test car included the available navigation system, but it took me a few moments to figure out where exactly I was along Route 14. Apparently “stuck on the side of the road in a car covered in fur and antifreeze” wasn’t enough information for emergency personnel to pinpoint my location.

About 30 minutes after the call a state cruiser pulled up behind me. Apparently, vehicular Bambicide isn’t as much of a crisis situation to the Michigan State Police as it is to Mazda roadside-assistance folks.

With the safety cushion of a Crown Victoria with lights a blazing behind me, I grabbed my luggage from the back of the Mazda. This was nasty business, as there was a thin layer of coolant covering the entire car. For those unfamiliar with it, coolant is gnarly stuff. A bit like diesel fuel, it clings to surfaces and the smell seems to never wash off your hands. Annoyingly, a thick layer of the stuff had accumulated on and around the hatch release.

The rest of the story is as you might expect. A tow truck was called for and I said farewell to our Mazda 3. I was the last to see it. I felt bad. I was also in a pickle. What was I to do without a car, four hours from home, at about 11:30 PM? 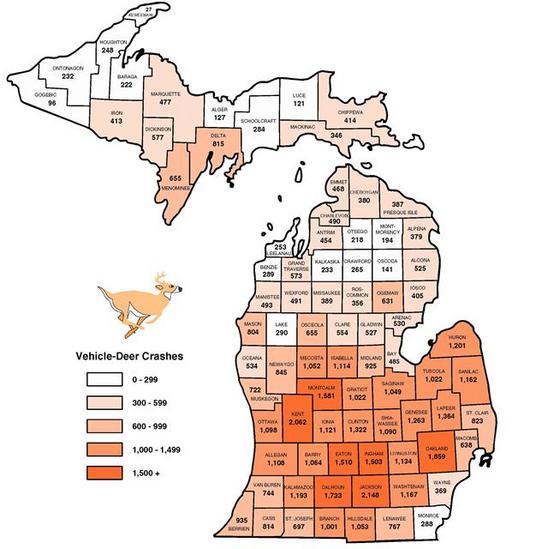 It is here that I extend my heartfelt gratitude to the officer who handled my accident. Not only was he impressively professional and empathetic, but he also managed to find me an open car-rental shop.

By about midnight I was in a late-model Chrysler Town & Country and heading for the Indiana state line. Four hours, two huge Diet Pepsis, and one incredibly disgusting pepper-jack tacquito roll-up thing from a gas station hot-dog roller later, I was at home in bed.

The next morning I drove to the airport to return the rental van. The damage? About $250 for a vehicle I used for less than 12 hours. Rental companies really don’t like the one-way loans, it seems.

To complete the catharsis that is this story, I want to thank Mazda for their understanding in this matter, thank the Michigan State Police for helping me out of an impossible jam, and thank my wife for losing sleep and checking on me all night.

State Farm reports that the average property-damage cost of a vehicular-deer encounter is $3050. Most alarming, perhaps, according to the Insurance Institute for Highway Safety (IIHS) is that 150 folks lose their lives in deer-related car accidents annually.

Oh, and the damage to our car? Mazda reports back that apart from ruining the cooling system, which is up front and large curled-up animal vulnerable, our deer also sheared off the oil filter. To play it safe, the assumption is being made that the engine is ruined. And that’s how a deer turned a 2010 Mazda 3 into a parts car.