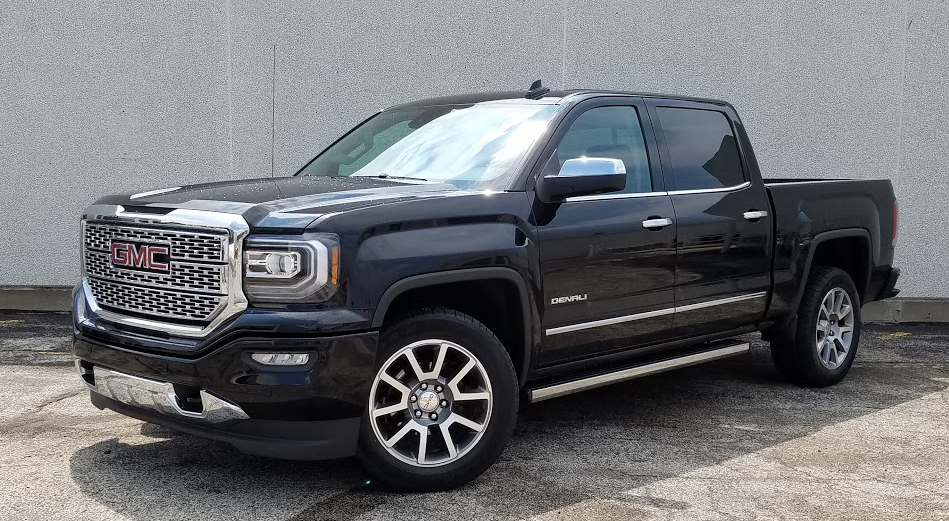 Denali represents the top rung of the GMC Sierra truck ladder, its station announced by a ritzy, chrome-laden grille and fancy trim. The 4WD version tested came to $63,285 with destination charge.

The not so good: Typical pickup-truck ride and handling 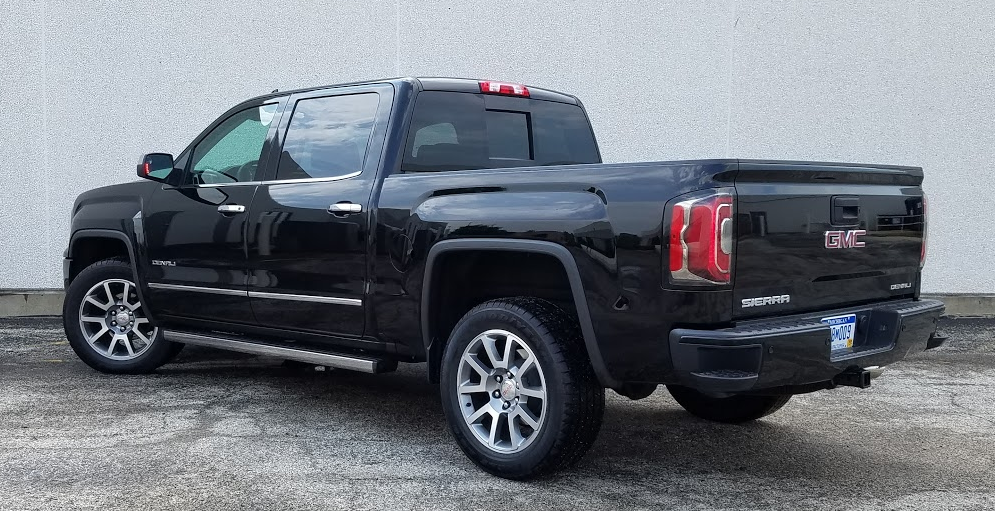 Although it lists for a staggering $63,285, our test GMC Sierra Denali 4×4 Crew Cab represents where the pickup market is going these days.

First, transaction prices for pickups are climbing, and there’s a big move toward loaded models with $50,000+ stickers. As one PR rep told us a few years back, “We can’t seem to find the price ceiling that turns customers away.”

Secondly, roughly 75 percent of all GMC Sierras are sold in 4WD form.

And thirdly, the 4-door crew-cab body style – which GM didn’t even offer on half-ton pickups until the early 2000s – has now taken over; in the Sierra line, they account for more than 70 percent of sales.

Denali represents the top of the GMC heap, and – in support of the current trend – represents about 15 percent of all Sierras sold … and the least expensive of them starts at more than $50,000.

For that, you get a host of features and some impressive if understated interior materials. You also get extra exterior chrome, unique wheels, and – perhaps most importantly – an exotic-looking grille and “Denali” badging.

A couple of the added features warrant mention. Our tester had power-actuated running boards; open a door and they power out, close the door and they power back in. The advantage is that running boards have a nasty habit of getting bent, particularly in off-road work. And while they’re often a boon to shorter drivers, taller folks tend to have to step over them to enter the truck, which means they’re just in the way. To the latter point, a 6-foot tester found them a nuisance, while a 5’9 tester (me) found them very useful, as step-in is otherwise a bit high. For the former, the Denali includes a dashboard switch that allows them to be deactivated so they remain tucked in. 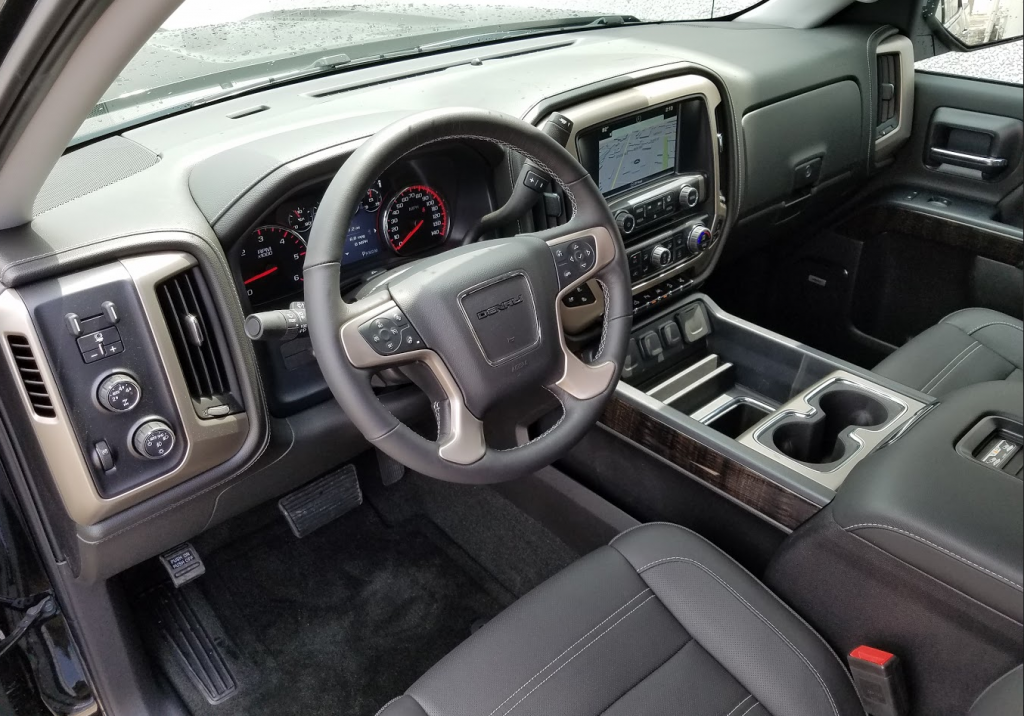 Denali is dressed up inside, too, with padded leather surfaces, dark woodgrain trim, and matte bronze-colored accents. We found the audio and climate controls easy to adjust.

The general appeal of pickups is their cargo bed. Trouble is, when you buy a half-ton crew cab, you don’t have the option of a traditional 8-foot box; it’s usually 6.5 ft. at most, and typically shorter. Though a 6.5 is also available, our tester had the standard 5.75-ft. bed. With the tailgate dropped, 4×8 sheets of plywood I bought just barely hung out over the edge, meaning they were supported, but I had to strap them in to avoid the risk of them sliding out (which happened to me once). That would be much harder to do with 2x4s or other lumber. Thus the best way to carry those is “half in, half out”; put one end through the sliding rear window and into the front-passenger foot well, let the rest hang out the window. I did that, too, and the power-sliding back window in the Denali made it a lot easier. (Because of this, I’d never buy a short-bed pickup without a sliding rear window.)

Inside, most surfaces are covered with padded leather (or at least, leather-like material), dark wood, or satin-finished gold trim. The overall look is appealing if a bit understated. Visibility is somewhat restricted to the front corners and sides due to fairly thick roof pillars, but it’s quite good to the rear corners. A rearview camera is standard, and allows you to see the bumper and hitch when you’re backing.

There’s ample head and leg room for taller folks front and rear. There’s also ample storage space, with a small upper glovebox, large lower one, a sizable forward console bin that sits below two USB jacks, two 12-volt plugs, and a 110-volt outlet, a huge console box with cell-phone charging pad on top, side console bins, small upper door pockets, and large segmented map pockets. Oddly – considering its price and “station” – there’s no real dead pedal on the left side of the footwell (which I rather missed), and the ignition is activated with an old-fashioned key rather than a more modern pushbutton. 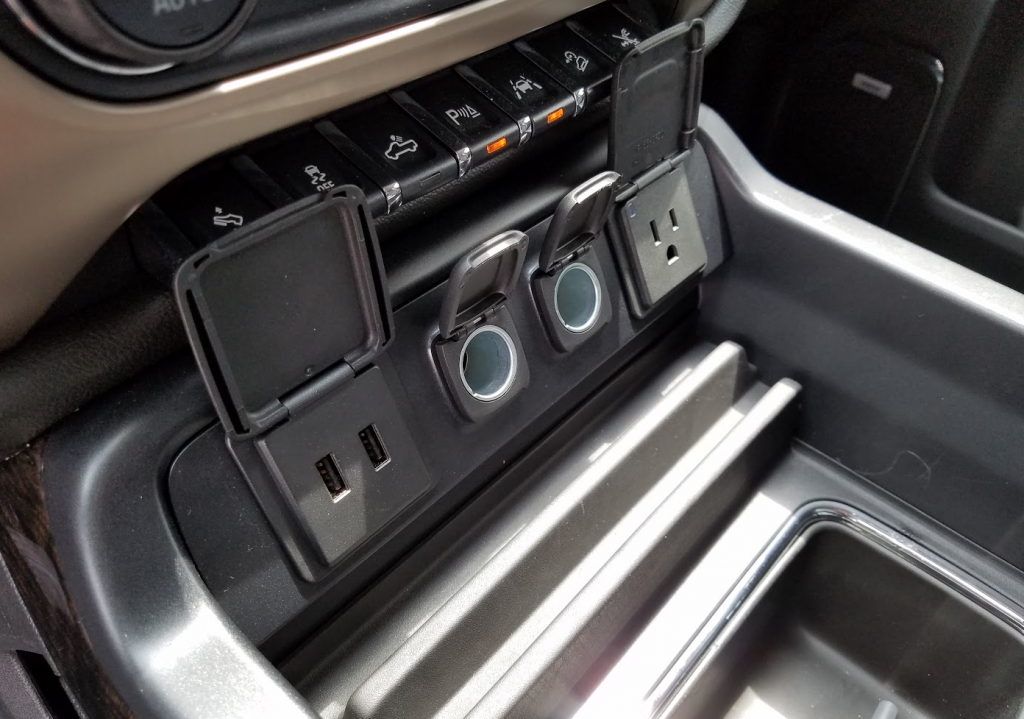 Handy interior features include easy accessible USB, 12-volt, and 110-volt plugs, along with a row of switches for such features as the cargo-bed light and to deactivate the power running boards.

One strong point in the Denali’s favor is its potent powertrain. Ours was fitted with a 6.2-liter V8 capable of generating a rousing 420 horsepower and 460 lb. ft. of torque. Mated to a 6-speed automatic, the combination is enough to launch the heavy truck with authority, and the transmission kicks down quickly for passing. The engine uses cylinder deactivation (it only runs on four cylinders under light load) to achieve a 15 city/21 highway/17 combined EPA rating. Over 469 miles of 65 percent highway driving, we averaged 18.2 mpg, and the truck’s trip computer had us at an even 25 mpg on one all-highway run. (You can also get a 5.3-liter V8 making 355 horsepower, which – along with its 8-speed automatic transmission in place of the 6.2’s 6-speed – nets you a 1-mpg gain.)

Ride and handling proved pretty truck-typical. With the bed empty, there was some hop and reverberating jiggle over almost any bump of any size, though adding a few hundred pounds of plywood and lumber – as I did – mutes most of those motions quite nicely. The 4WD Sierra Denali is rated for a 2010-lb payload capacity and 11,770-lb towing capacity, so it’s no hauling wimp. Steering and handling are also typical of pickups: reasonably capable in corners, light steering for easy parking, but also a large turning radius and obstructive sightlines to nearby objects due to tall front fenders.

As might be expected, the Denali makes available a host of modern safety and convenience features. These include lane-departure warning, lane-keep assist, forward collision alert, automatic high-beam control, and trailer sway control. Warnings for some of these plus the front and rear obstacle detection come in the form of vibrating seat-cushion bolsters, (which are kind of weird the first time they go off) and an accompanying humming sound.

While the Denali trim level currently makes up a fairly modest percentage of Sierras sold, the ratio is higher in some other GMC vehicles. That’s a strong indication that pickups and other large haulers are no longer simply beasts of burden, and while the Sierra Denali can certainly haul (in more ways than one), it doesn’t sacrifice comfort or style for the capability.

Our test truck came with the standard 5.75-foot cargo bed, but a 6.5-foot bed is also available.