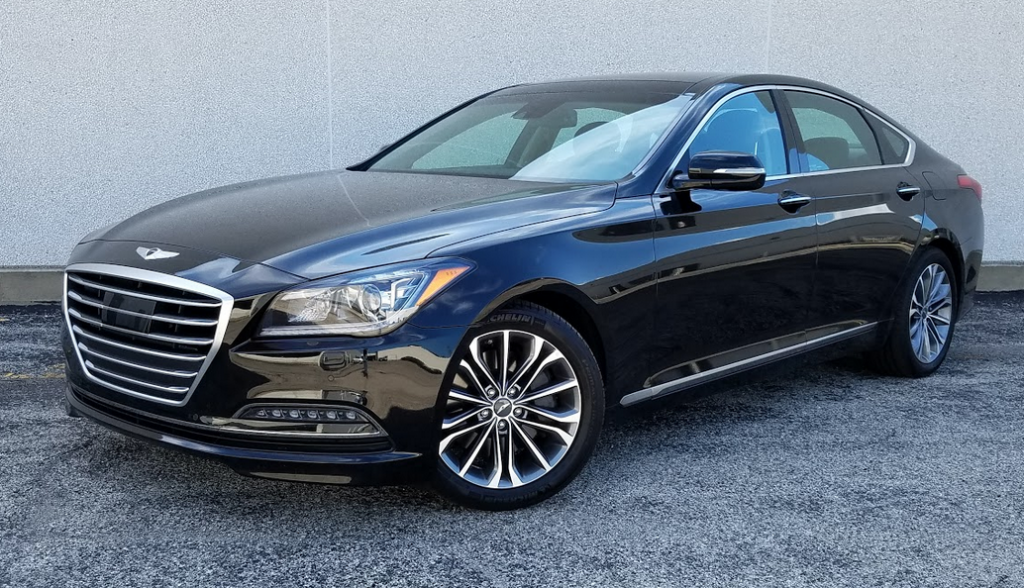 The great: Cabin space and refinement

The good: Drivetrain power and smoothness 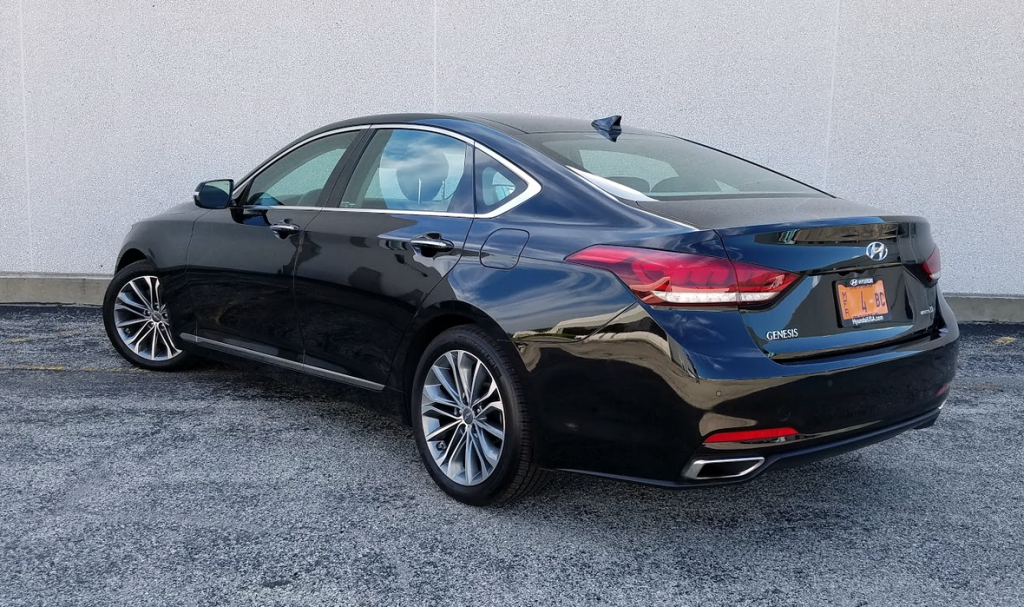 The Hyundai Genesis sedan will be discontinued after 2016, at least in name. It will be slightly revised and rebadged as the Genesis G80, one of two vehicles that kick off the launch of Hyundai’s new premium Genesis brand. The other inaugural Genesis-brand vehicle is the G90, an all-new large luxury sedan that replaces the outgoing Hyundai Equus model in price, size, and luxury trimmings. You can read more about the new Genesis brand and its future-product plans here.

The Genesis cabin is both roomy and well-appointed. The classy satin-finish wood trim and aluminum trim come as part of the $3500 Ultimate Package.

Hardly a week (a day?) goes by without hearing someone say that about something. It may not be the deepest analysis of most situations, and you might even be a little tired of hearing it, but the statement does pretty well summarize the 2016 Hyundai Genesis.

The ’16 Genesis with a 3.8-liter V6 and all-wheel drive that Consumer Guide® sampled was a virtual continuation of the 2015 model that CG editors drove. The base price has risen by $750, to $41,250, some of which covers the adoption of automatically leveling high-intensity-discharge headlights and LED daytime running lights as standard equipment—which more or less covers what’s new for ’16. The AWD model’s starting tab remains $2500 higher than that of its rear-wheel-drive sibling. Gone early from the 2016 lineup is the rear-drive-only V8 model, which was cleared away to create some breathing room for the upcoming—and upscale—Genesis-brand G80 sedan.

Frankly, though, there’s not a lot about the 2015-generation Hyundai Genesis that cries out for changing. CG still wishes its fuel economy was better, and ride and handling trail some rivals. However, it’s an impressive value thanks to a generously-sized and quiet cabin, ample trunk space, and the availability of about all the comforts and conveniences anyone could want.

Hyundai may not have yet found a truly striking signature look for its big vehicles, but the Genesis sedan’s clean, upscale design should impress most high-end shoppers.

The 3.8-liter dohc V6 still makes 311 horsepower and moves the Genesis smartly (especially in the selectable “Sport” mode that delays upshifts to build revs), albeit with more noise than the prestige brands that the Genesis wants to emulate would elicit. Also, with the air conditioner running there was a bit of a “kick” to the engine idle that would disappear with the AC switched off. The smooth 8-speed automatic transmission kicks down promptly to help the Genesis scoot along. However, EPA mileage estimates of 16 mpg in city driving, 25 on the highway, and 19 combined won’t bowl anyone over, and in this driver’s 174.9-mile turn in the test car—67 percent in city-type conditions—it returned just 15.77 mpg. 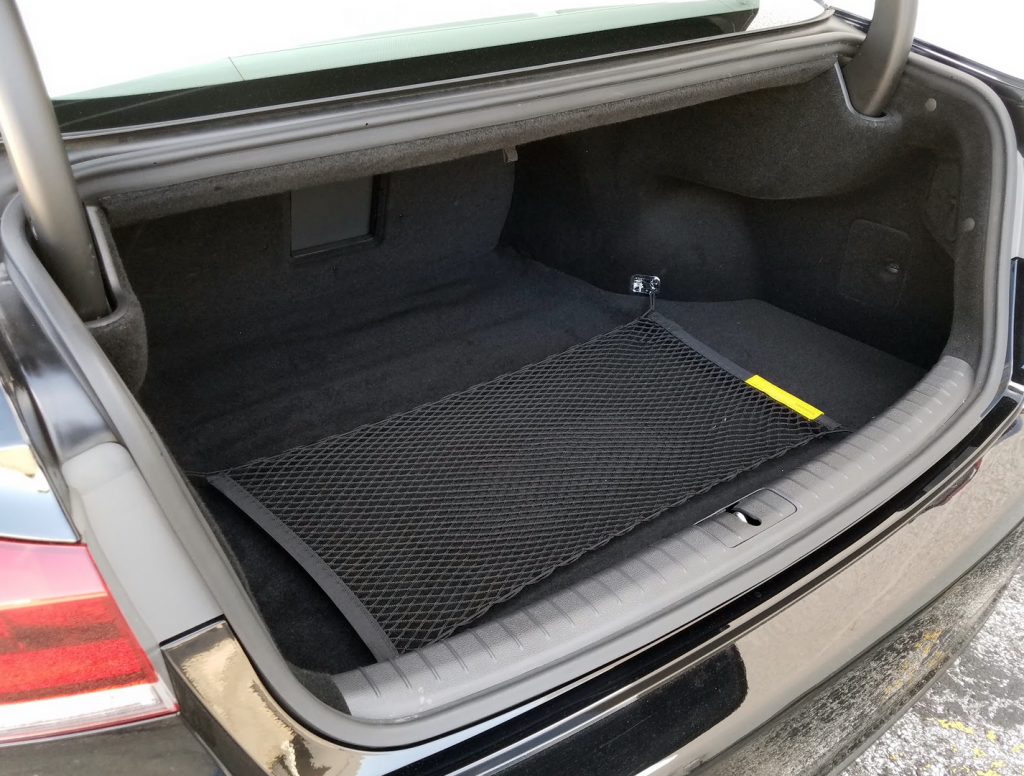 There’s excellent head- and legroom in both seating rows, with enough room in back for three adults—provided the center occupant can come to an accommodation with the driveline tunnel. Driver vision is fine thanks to an airy greenhouse. While a little button-intensive, controls are easy and intuitive to use, even on the touchscreen. Quite a lot of the interior is covered in surfaces with at least a little bit of give for an overall plush ambience. 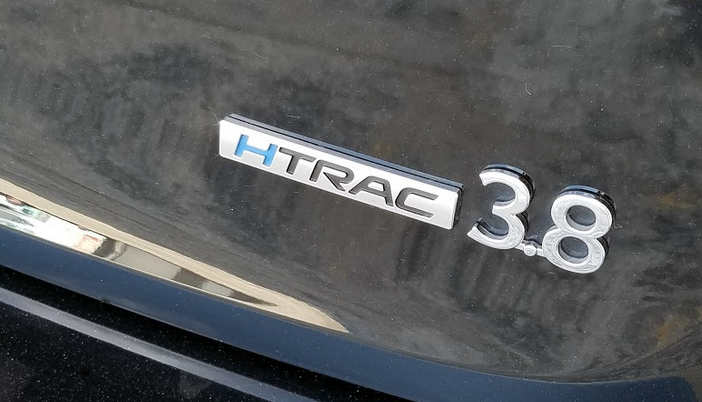 With 311 horsepower on tap, the base 3.8 V6 engine provides plenty of power. The all-wheel drive Genesis starts at $2500 more than the rear-drive model.

The glove box is big; the console box (with odd 50/50 side-hinged doors) a little less so. The console has two covered cup holders and a covered bin under dash for USB and power plug-ins. Doors feature long, narrow map pockets, but they’re somewhat narrow. Expandable pouches are attached to the backs of the front seats. A pull-down center armrest includes cup holders and control buttons for the seat heaters and optional rear window shade.

The carpeted trunk boasts a wide opening that exposes good space, even between the wheel houses. Gooseneck hinges are covered. There’s a pass-through in the middle of the rear seats, but the seats don’t fold.

It’s hard not to be impressed by this car’s build quality and upscale cabin materials. That sense of quality doesn’t diminish underway, as Genesis is especially quiet and smooth riding. I especially appreciate the adjustable side bolsters on the driver’s seat, a feature that would likely make this car an outstanding long-haul cruiser. 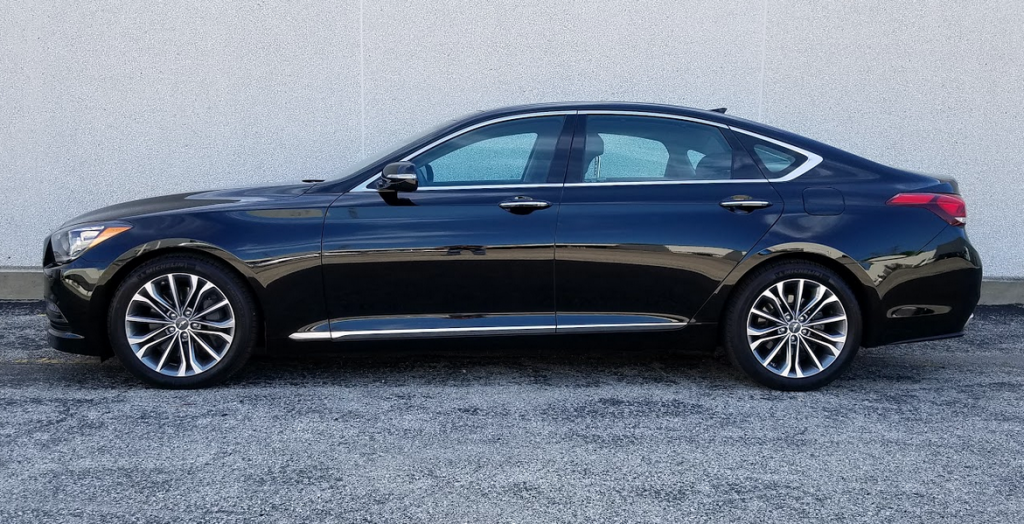 The profile seen here won’t change much for 2017, as the Hyundai Genesis becomes the Genesis G80. The G80 will start at about $2600 more than the Genesis sedan, but will offer a bit more standard equipment in the bargain.