Little but the name and the lug nuts carry over from the previous-generation LaCrosse to the new one, which is aimed at a younger audience. It goes on sale this month at at starting price of about $33,000.

While it’s certainly the most “Buick-like” vehicle in the marque’s lineup, the redesigned 2017 LaCrosse is breaking out of its traditional mold with swoopier styling, a sportier demeanor, and many new high-tech features.

Although we consider the LaCrosse to be in the “regular” large-car category, it’s long peered over the line into the premium class. Due to its straddling the midsize and large segments in terms of dimensions, however, its “premium” rivals are usually considered to be midsizers such as the Lexus ES 350, a long-time benchmark for luxury. And due to some changes on the new model – such as standard V6 engine and more features along with a commensurately higher price – the new LaCrosse further strengthens that argument. Except, maybe, to us. 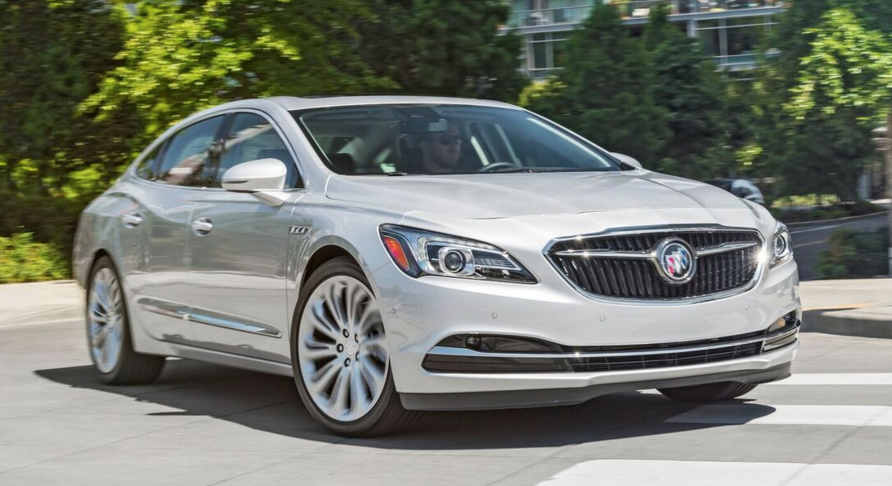 The 2017 LaCrosse sports a new grille design that veers from its roots. Behind it is a more powerful — and more thrifty — standard V6 engine and 8-speed automatic transmission.

The new LaCrosse is only slightly longer, lower, and wider than the outgoing model, but its 2.5-inch-longer wheelbase gives it even more interior space. The standard V6, which was previously optional in place of a 4-cylinder, displaces the same 3.6 liters as before, but it’s a whole new engine. Horsepower rises from 304 to 310, but a stop/start system, Active Fuel Management (cylinder deactivation), an 8-speed automatic transmission (replacing a 6-speed) and a 300-lb weight reduction contribute to a significant 3-mpg increase in EPA fuel-economy figures, now coming in at 21 city/31 highway from front-drive models, 20/29 with all-wheel drive – this despite the fact that a revised EPA testing procedure for 2017 models has resulted in lower numbers for most cars. The formerly standard 4-cylinder engine, which included a “mild hybrid” system, was rated at 25/36, but that engine has been dropped.

Speaking of models, the lineup now includes four trim levels: Base, Preferred, Essence, and Premium. All come with front-wheel drive, while only the top-line Premium offers all-wheel drive. Prices start at $32,990 including destination – about $1000 more than before – while the least-expensive all-wheel-drive version, now the Premium, starts at $44,190, a roughly $4300 jump. 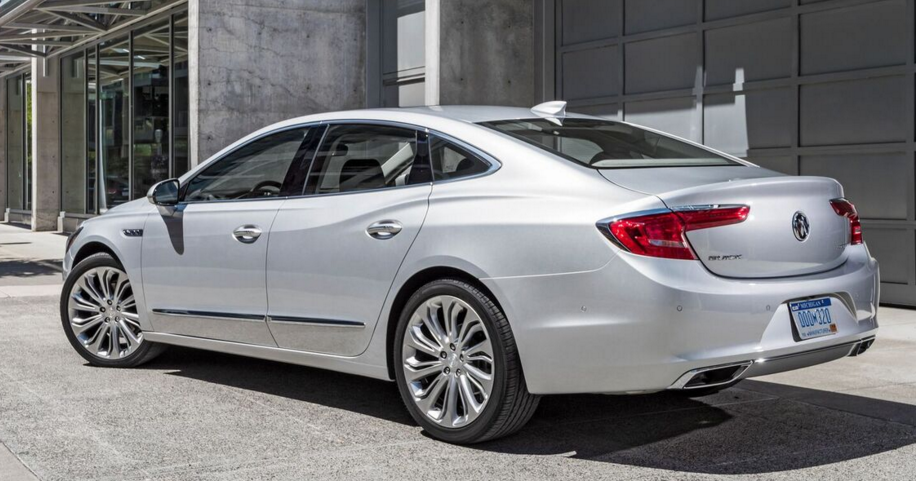 Without the trunk badging, most folks probably wouldn’t guess this is a Buick. These 20-inch wheels and sport suspension are optional, as is all-wheel drive — but in the latter case, only on the top-line model.

The last LaCrosse was a roomy family sedan with upscale trim and luxury features, but the new one takes all that up a notch while adding the option of a sportier feel. The last comes courtesy of the aforementioned suspension package that includes adjustable shocks and 20-inch wheels, offered only on front-drive models. As our drive route consisted largely of winding roads with some interstate travel, we had the opportunity to drive cars equipped with both suspensions.

As is often the case, we found the base suspension to be a fine compromise. The adjustable suspension has “Normal” and “Sport” modes, but the 20-inch low-profile tires made Normal feel a bit stiffer over small bumps than the standard set-up. In the twisties, the Sport mode acquitted itself quite well, providing sportier steering along with a more-controlled ride with less body lean, but we doubt most buyers would find the optional suspension’s $1625 price tag worth the complication and slight sacrifice to overall ride quality. 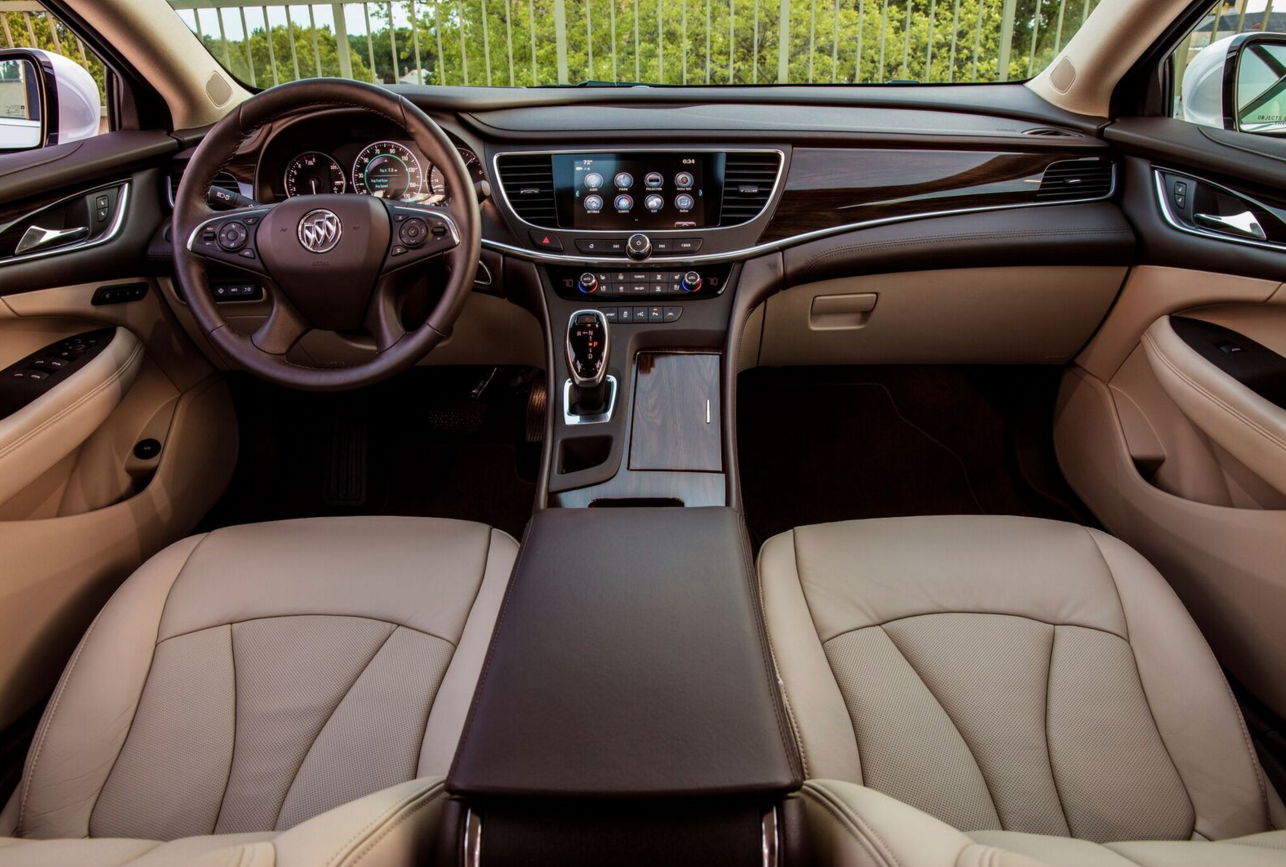 A two-tone interior is offered to replace all black, and a choice of trim styles (dark wood shown here) are available. An impressive number of surfaces are padded, including the door tops and upper edges of the console. Driver-seat memory not only includes the seat and mirrors, but also the steering-wheel setting — an unusual nicety.

The powerful V6 engine provided strong take-offs and – in conjunction with the quick-to-downshift automatic transmission – good passing response. Our only complaint had to do with the start/stop system, and it’s a fairly small one. If you floor the throttle from a stop, it takes just a moment for the engine to be started (it usually shuts off when the car comes to a stop), making for just a bit of hesitation before the car takes off. This whole procedure was virtually seamless, but while many cars with stop/start include a button that can turn it off, the LaCrosse doesn’t. We also noticed a couple of instances where it seemed the transmission produced a slight shudder on an upshift or downshift, but it didn’t happen often.

One goal of LaCrosse engineers was to provide an even quieter cabin, and as best as we could tell, they succeeded. Some highways in Portland, Oregon, are paved with what seem like small boulders (a native said it helped rain drain off between them) that create a lot of road noise, but those that were topped with plain asphalt were traversed with impressive calm.

One of our (few) complaints about the last LaCrosse had to do with front-corner visibility, which was sacrificed to very wide front roof pillars. That’s been largely corrected in the new model, which has fairly thin front roof pillars (though the right side blocks more than the left due to its angle) and good overall visibility. The only slight exception is to the rear corners, mostly because the beltline raises, but the standard rearview camera helps in this regard.

Interiors come in either all black or a black/tan 2-tone combination, and almost any surface one might touch is padded – including the door tops and even the upper edge of the console. There is a choice of trim (our test cars were fitted with dark wood), and the overall look is decidedly upscale. 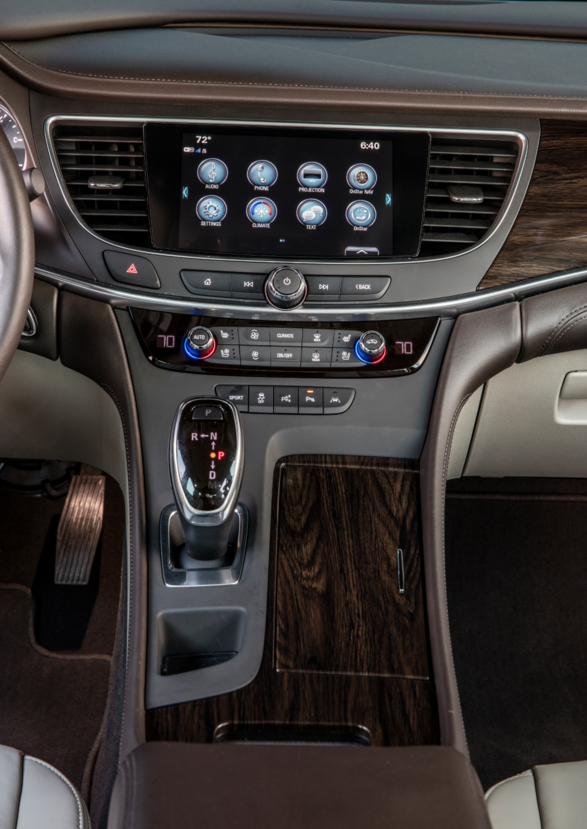 The electronic shift lever may take some getting used to, but it works well enough; you engage Park by pressing a button on top. Infotainment controls might also take some study. Cupholders (next to the shifter) are covered — a nice touch — and you can get wireless charging for your cell phone.

As might be expected, interior room is a strong point. One can summon a substantial amount of front headroom and legroom, and even with the front seats all the way rearward, there’s still enough knee room left for an average-size adult to squeeze in back; behind a normal-size front seater, it’s downright spacious, though headroom might be tight for those over 6-feet tall. Notable features here are that heating, cooling, power lumbar, and massage can be fitted to both front seats, and the driver-seat memory system – which is standard on all but the base model – includes the steering-wheel setting.

Interior storage has been improved, partly due to the adoption of an electronic console gear selector – which saves a lot of console space and works well enough, but functions in a non-intuitive manner that will seem odd to most buyers. In addition to the usual glovebox, console box, cupholders, and door map pockets, there are a couple of small console bins (one with optional wireless cell-phone charger) and a large under-console tray big enough to hold a tablet or medium-size purse. The console box contains 12-volt, Aux, and two USB plugs, with another 12-volt plug in the under-console tray. Premium models add a 110-volt outlet at the rear of the console.

With all the new audio, navigation, phone, and other functions that must now be incorporated into the infotainment system, performing previously simple operations has often become a more complicated, multi-step procedure. Some systems make it easier than others, and the LaCrosse’s leans toward the better of them. The only knob is for on/off and volume and there are a couple of traditional buttons, but most functions are accessed through the touchscreen – which is mounted high, with the outer edge being just out of easy reach. Function is fairly intuitive (at least if you’re used to such systems), but many adjustments are done in steps rather than with the push of a single button – as they used to be in the “good ol’ days.” Climate controls are mounted high and within easy reach, but only temperature is adjusted with a convenient rotary knob; fan speed is by repetitive-step pushbutton, mode by a 2-step process on the touchscreen. Notable is the available head-up display, which projects speed, navigation directions, and other info on the base of the windshield in the driver’s line of sight.

The trunk is fairly large and wide at the rear, but sickle-shaped hinges dip into the load area, there’s only informal storage under the floor, and there’s a 4-inch step-up to get long items past the folded rear seat backs.

Trunk space is quite good, and the rear seat backs fold to create more, though they rest four inches above the level of the cargo floor, so you can’t easily slide long items forward. On the positive side, they’ll fold flat even with the front seat all the way back, which is not always the case. The cargo area is wide at the rear, but sickle-shaped hinges dip int the load area, and while many cars have a good amount of hidden storage beneath the floor, there’s just some “unofficial” space around the spare tire.

Overall, the new LaCrosse is an even better big sedan than the old one. We think some “traditional” buyers might find the gear selector and infotainment controls to take a bit of acclimation, but the latter, at least, is going to be the case with most modern cars.

And we really wish all-wheel drive – which has become very popular in the northern states – was available at a lower price point. But this is truly a case where, “If you liked the old one, you’ll like the new one even better,” and we liked the old one quite a bit.