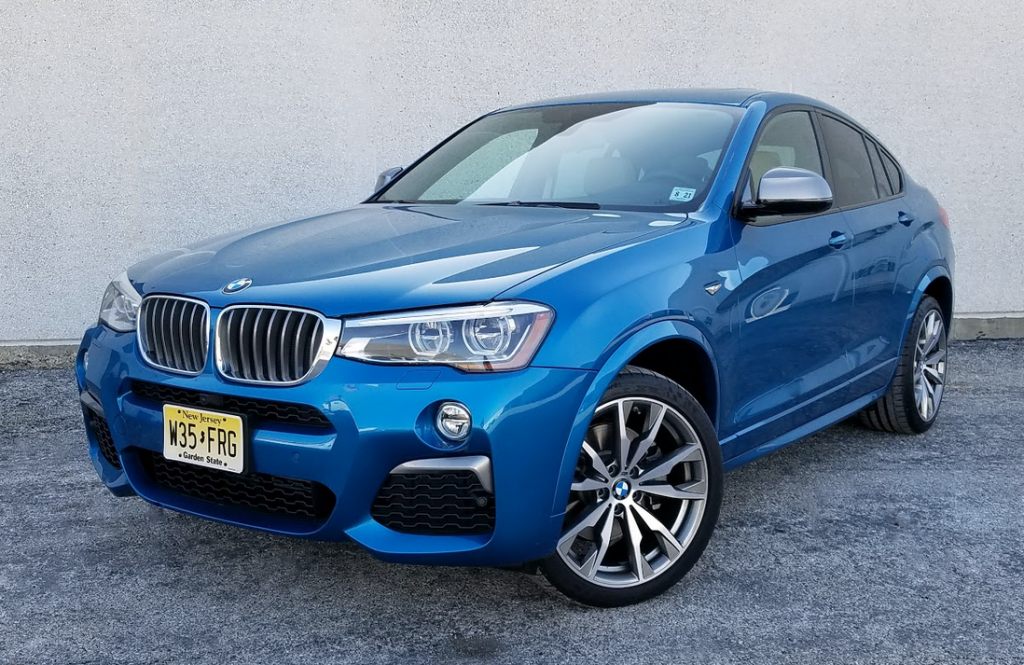 The good: Decent fuel economy given the horsepower on tap

The not so good: Compromised rear-seat-passenger and cargo versatility, option packages drive up already hefty base price

In BMW’s mix of compact “X” vehicles, there’s one for stow and one for go. The X3 is a small sport-utility vehicle in the handy wagon body configuration that people want in an SUV. The X4 is a fastback-roofed hatchback with sport-sedan aspirations—all the more so as an M40i.

The X4 seems to be targeted at shoppers who can’t choose between an SUV and a premium sedan. The M40i version is for those who are further conflicted about missing out on a high-performance car. So, goes the thinking, why not get them all in one? The result is a high-riding all-wheel-drive four-door with hatchback convenience but not SUV cargo capacity that still gets after it when on road (4.7 seconds 0-60 mph, the manufacturer claims). Whether it’s the best it could be at any one of these things is an open question. 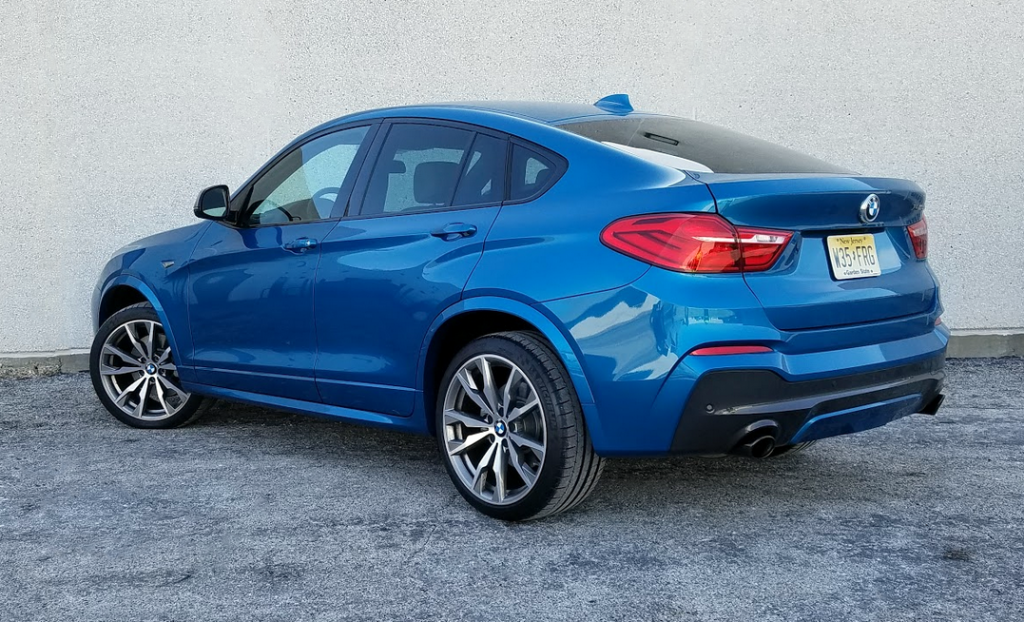 A fastback roofline on a tall-bodied crossover SUV strikes us as a rather odd design arrangement, but considering the recent proliferation of SUVs of this type, a sufficient number of shoppers think they offer the best of both worlds.

Consumer Guide® tested an M40i that stickered for a healthy $67,495 with delivery; Long Beach Blue Metallic paint; 20-inch “M” light-alloy wheels; rearview camera; surround-view system; and Cold Weather, Lighting, and Technology packages tacked on. All-in types can select a number of additional stand-alone options, including the new-for-’17 pairing of wireless phone charging and a Wi-Fi hotspot. Thus, an X4 M40i can be one more thing: expensive.

There’s a good amount of front-row passenger space, but the sloping roofline compromises rear-seat headroom. High-quality cabin materials are on par with other vehicles in this price class.

General trunk space in this sedan for SUV buyers is fairly limited but there is small-item storage under the floor, in an open bin at the right side, and in a net pocket on the left. Rear seats are divided in 40/20/40 fashion, and they fold almost perfectly flat to drastically expand cargo space. In the manner of a true hatchback there are no body bulkheads to restrict the size or placement of items that can be loaded into this extra space.

Performance from this sport-sedan for hatchback customers ranges from highly capable to downright zesty, depending on where a driver sets the standard Driving Dynamics Control. Choices include “Eco Pro,” Comfort,” “Sport,” and “Sport+.” The M40i’s turbocharged 3.0-liter 6-cylinder engine makes 355 horsepower. Dialing up the Sport setting instructs the 8-speed automatic transmission to linger a little longer in each gear, enhancing acceleration—and coaxing a more aggressive exhaust note. One downside is that sometimes, in situations where a good stab of the throttle is followed by fully backing off the gas, the driveline rebels with a solid thump. Note that all X4s (there’s also a 28i with a 240-horsepower turbo 4-cylinder engine that starts at $45,550) come with all-wheel-drive.

In addition to altering engine performance, Sport firms up the damping and tightens the steering on the M40i’s sport-tuned suspension to deliver fine handling. However, this crossover for sport-sedan lovers still goes eagerly in the default Comfort setting, and with a slightly softer ride—to this reviewer it felt like the better choice for day-in, day-out commuting. As for fuel economy, he averaged 21.32 mpg from a 255.9-mile trip composed of 56 percent city-style driving. That shows up favorably compared to the EPA estimates of 19 mpg in the city, 26 on the highway, and 21 combined. 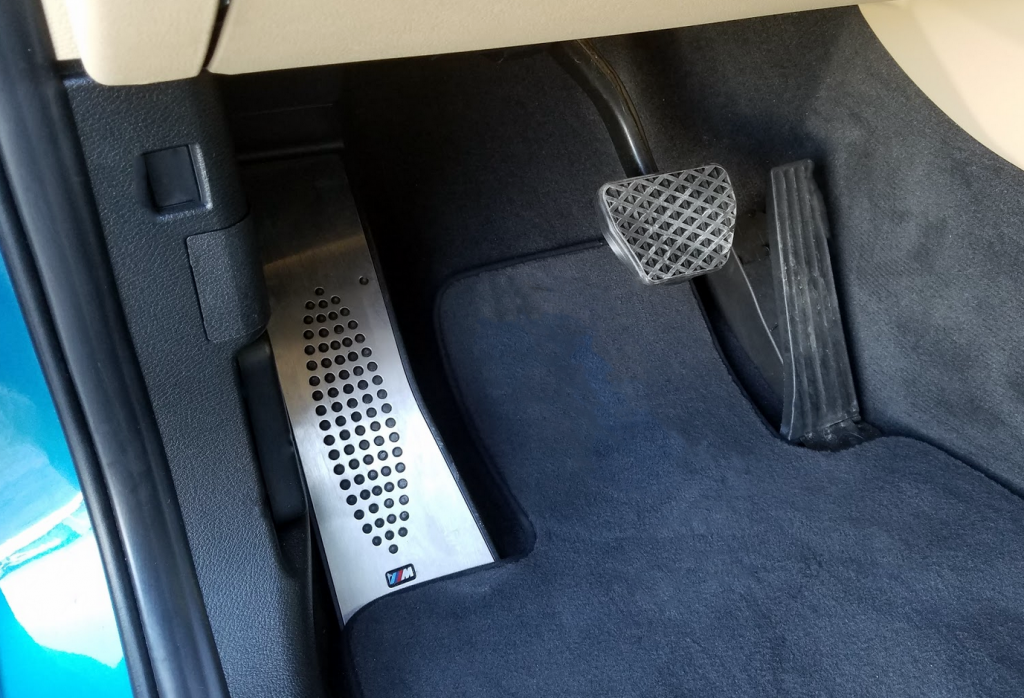 There’s no stick shift, but we appreciate the X4 M40i’s aluminum dead pedal.

The M40i’s Interior appearance and materials are traditionally BMW for this class and price level. The dash has padded soft surfaces over its entirety, and only the lower half of the door panels are plastic. Supportive sport seats are covered in leather and wood accents adorn the dash and doors. A nicely padded M sport steering wheel is at the driver’s disposal. A moonroof, ambient lighting, automatic climate control, and Harman Kardon surround-sound audio with satellite radio are standard as well.

Easy-to-read analog gauges confront the driver. BMW’s iDrive central control—managed via a dial on the console—requires more station-setting monkeyshines than this driver would like. This is “iDrive 5.0,” which allows wireless integration of various apps (Spotify, Pandora, etc.), and features enhanced graphics. It also controls the optional navigation system that is designed to “learn” frequently driven routes. However, climate settings are made from a separate control bank below the display screen and dash air vents. Rotating knobs set temperature in both zones, with a group of eight buttons for function selections. The optional technology package on the test car included a detailed head-up display projected on the windshield. It stood up better than some cars with this feature do to polarized sunglasses, which usually render such read-outs invisible. 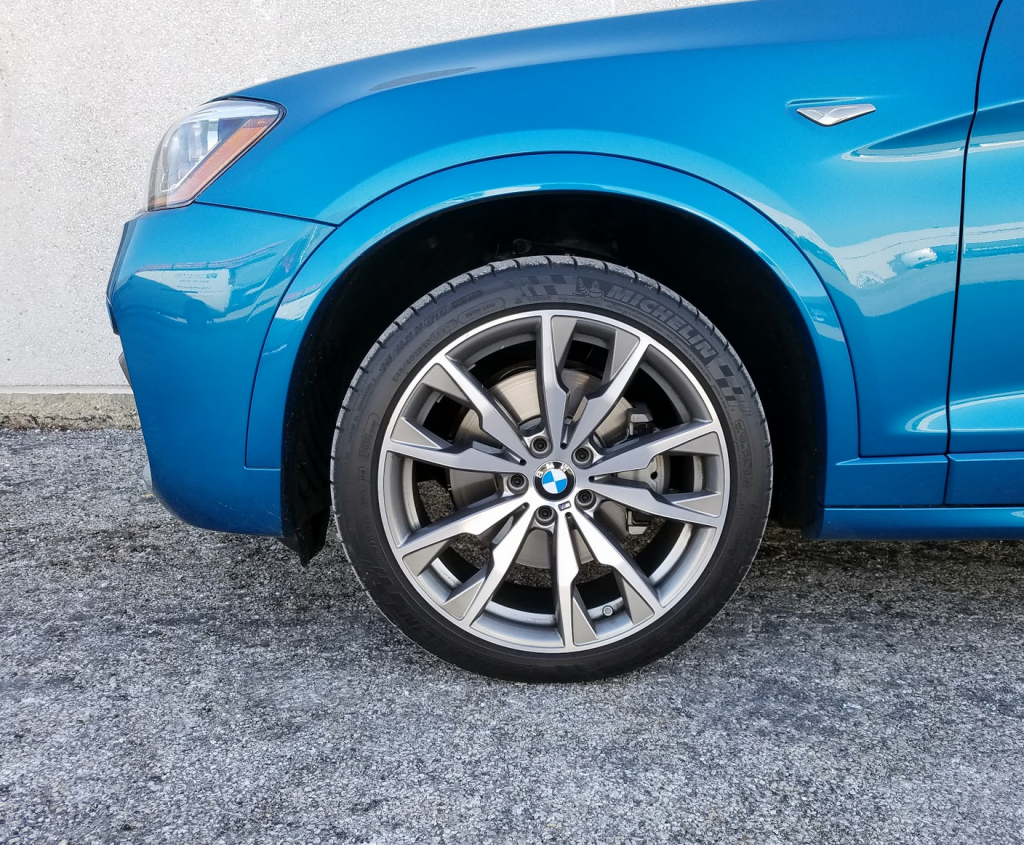 Front-seat room is pretty good for a compact, and rear-seat space is not so bad—again considering the overall size of the vehicle. A somewhat tall driveline tunnel and what is basically just some padding on the structure between the outboard seats mean that comfortably accommodating a middle-rear passenger is pretty much out of the question. The bottom of the rear door opening is narrow, which complicates exits. Ride height is raised—that is part of the X4’s SUV-light shtick—but not enough to cause passengers step-over difficulty. Straight-back vision isn’t the best due to the slope of the backlight; otherwise sightlines are OK in every other direction.

Incidental storage in the cabin is served by an accommodating glove box, two cup holders and a power point under a sliding cover ahead of the shifter, a small covered console box partly given over to a flip-up tray, a pull-out compartment to the left of the steering column, and a small net pouch on the passenger side of the transmission tunnel. All four door pockets incorporate bottle holders—the pockets are larger in front than they are in the rear. Rear-seat storage possibilities are net pouches on the backs of the front seats and two pop-up cup holders in the pull-down center armrest.

Who knows how big a market there is for a premium sedan that behaves a little like a compact SUV while showing performance-car tendencies? Also clouding the picture is the need to spend extra for luxury-car luxuries in a car that already starts at $58,100. Things like a heated steering wheel and seats, navigation, a rearview camera, and remote services have to be added. It is quite a bit of fun to drive—it is a BMW M vehicle—but determining just what “it” truly is defies easy answers. 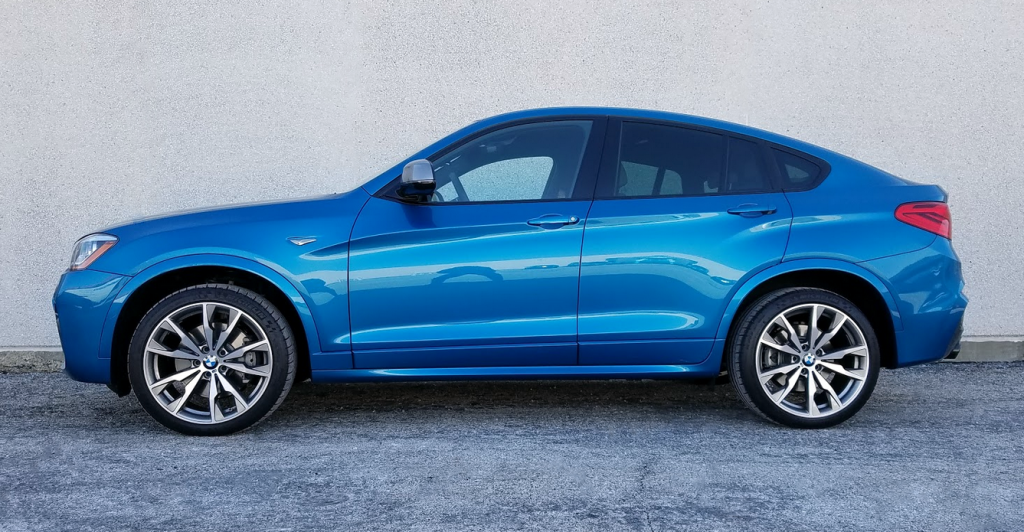