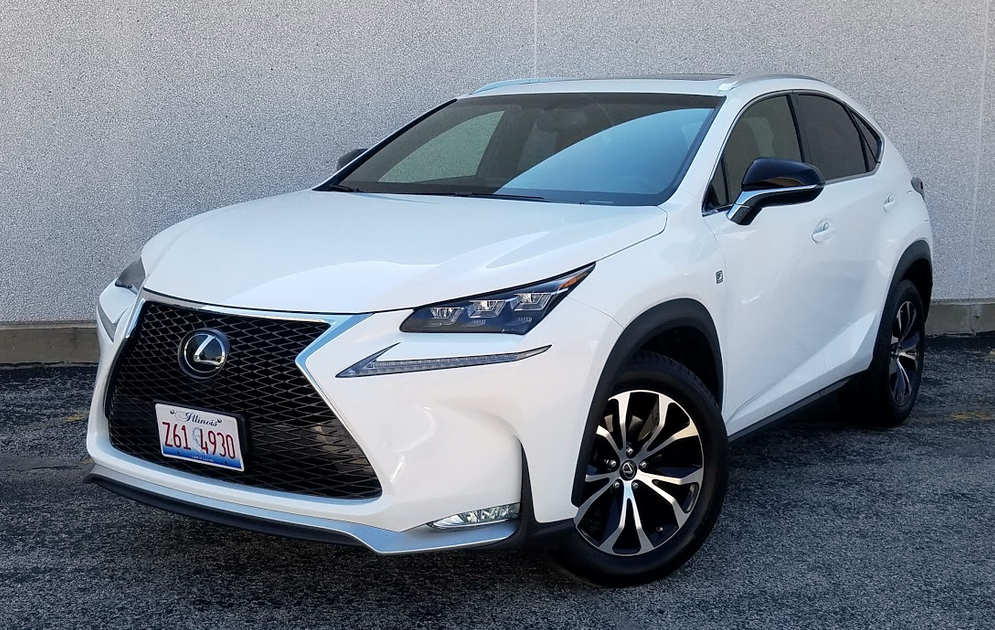 The not so good: Limited second-row headroom, pricey options

The NX 200ts that Consumer Guide® tested for 2015 and 2016 both were F Sport models, the middle of the premium compact SUV’s three-tiered model range. There’s precious little that’s been done to the NX for its second year on the market, but the test vehicles weren’t exactly two peas in a pod.

CG’s most recent NX F Sport tester was a two-wheel-drive model (the front wheels, that is) while the 2015 example was an all-wheel-drive truck. Opting for the front-drive job will save $1400 in sticker price and 110 pounds of vehicle weight. That latter number may have a little bit of an impact on fuel mileage. 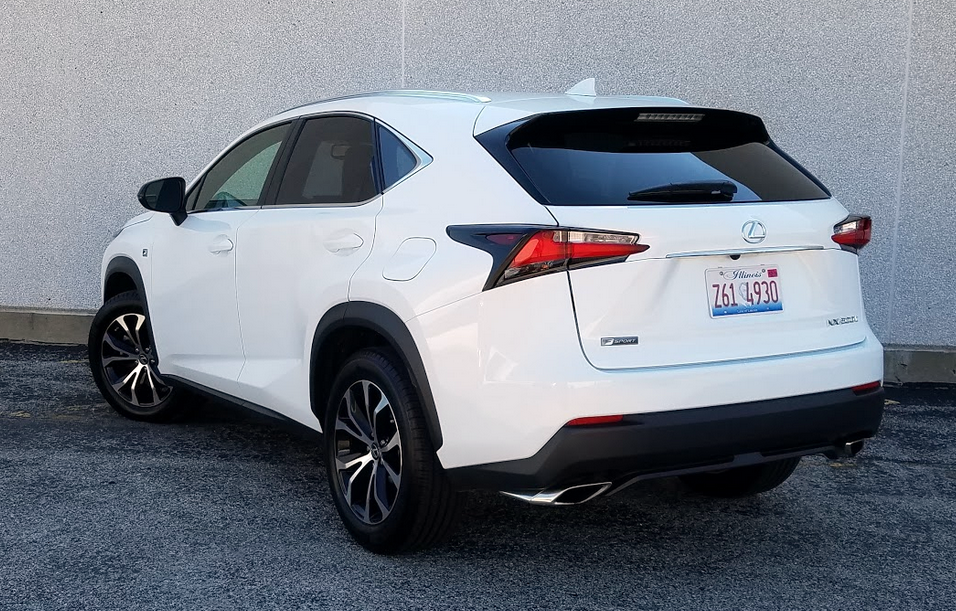 Introduced as as 2015 model, the NX has found its share of premium compact crossover buyers. Lexus is on pace to sell almost 55,000 examples of the NX this year.

The NX cabin is a little more assertively styled than other Lexus models. The nicely finished cabin offers plenty of front-row space, even for bigger and taller occupants.

In practically all other respects, the driving and riding experiences between one 200t F Sport and the other were virtually matches. The engine’s Lexus-built turbocharger, with air-to-liquid intercooler, is subject to some turbo lag but is pretty lively when fully spooled up. (The turbo engine spins out 258 lb-ft of torque between 1600 and 4000 rpm.) Selectable modes—“Normal,” “Sport,” or “Econ”—tweak throttle response and power-steering assist. The nimble NX responds attentively to steering inputs but torque steer can creep in during hard acceleration. The F Sport enhances the standard suspension of front MacPherson struts and rear double wishbones and trailing arms with stiffer bushings and additional stabilizer bars front and rear, both with an oil-filled piston at the center to absorb shocks and quell noise and vibration. Eighteen-inch alloy wheels hold 225/60R18 all-season tires. Bad road imperfections will make themselves felt in the F Sport but overall ride and quiet aren’t bad. 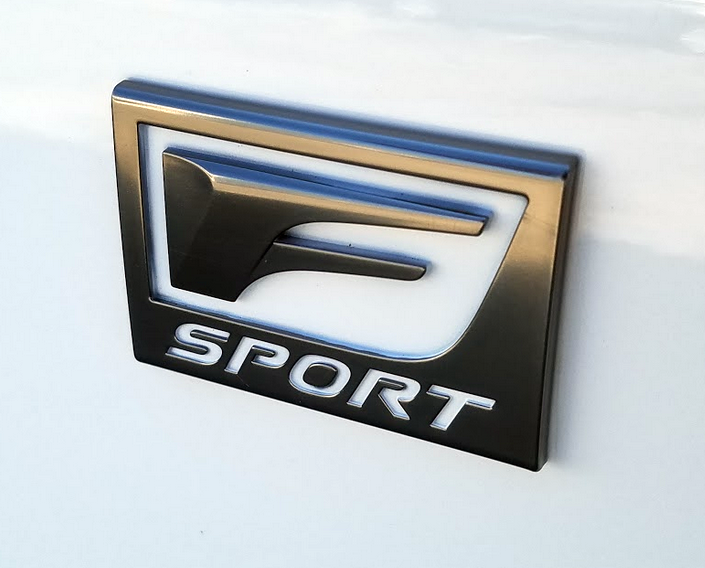 Per Lexus, 30 percent of NX buyers opt for the F Sport treatment. That figure runs about five percent higher on NX than it does on other vehicles on which an F Sport model is available.

The interior had a decidedly upscale feel, with generous application of soft-touch materials on doors and dash. F Sports dress their seats in imitation-leather upholstery, and textured-metal highlights adorn the dash and doors. F Sport seats have a grippy, firmly bolstered design of their own that might not suit all builds as well it does others. Front headroom and straight-ahead legroom are quite good, though there’s not a lot of space for legs and knees between the console and door panels. Thick, sloping roof pillars diminish over-the-shoulder visibility, and rear headrests limit the straight-back view. Rear-seat legroom is sufficient for grown-ups. Three children will fit across the rear seat—and maybe three adults in a pinch. Headroom can be a close fit for adults, but manually adjustable seat backs can open up a little more space.

Both of CG’s F Sport test vehicles came with the Navigation Package option, which brings with it Lexus’ console-touchpad Remote Touch Interface. Users can “pinch,” double tap, or push to access information or change views on the seven-inch display screen in the dash. It is hardly the most aggravating such system that this driver has tried, but working it still demands more attention than he’d like while driving. Climate and some radio settings can be set via buttons on the center stack, though they display on the screen. The instrument cluster includes a thin-film transistor (TFT) display of vehicle information. F Sports have distinct graphics, and the information display includes a turbo boost gauge and a g-force meter, but direct sunlight washes out the display. “Active Sound Control” allows the driver to dial up the exhaust-sound volume in the cabin for a sportier ambience. 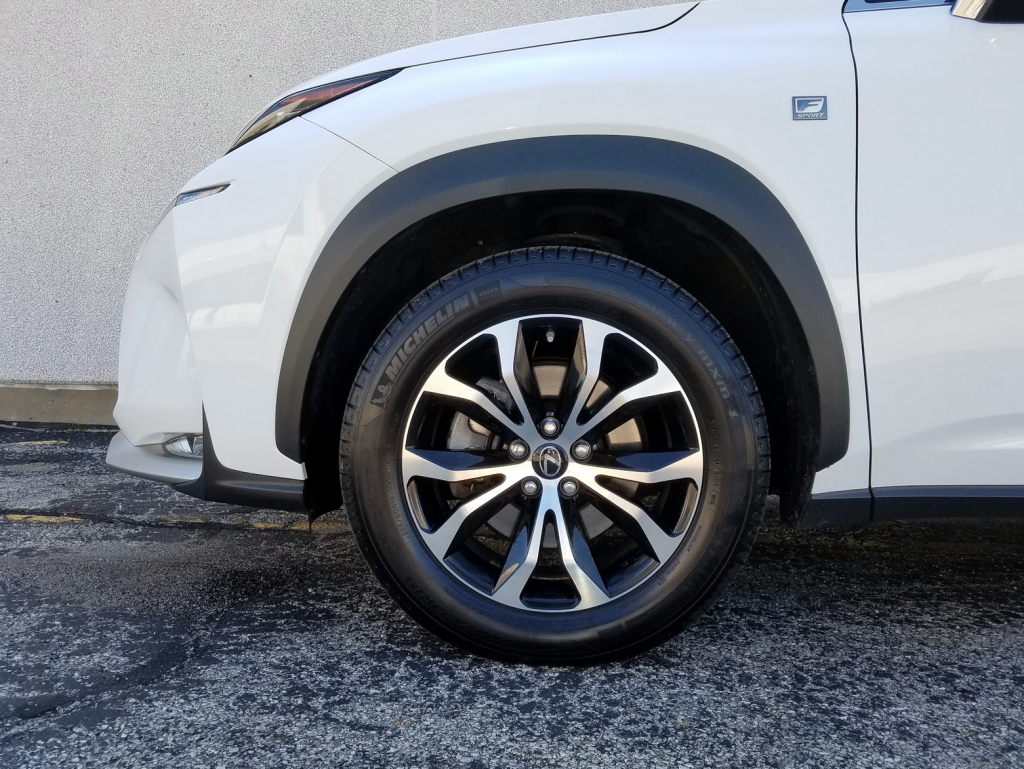 Interior storage includes an ample glove box, plus a modest covered console cubby in which USB and power ports are found. The cubby is home to an optional wireless charger for compatible mobile phones and devices. It looks like a tray, and it blocks access to the console box when in use, but it does flip up to provide access to the storage space. Door pockets in front include space for a bottle, but rear pockets are just big enough for a bottle. There are pouches on the backs of the front seats, and a rear pull-down center armrest with twin cup holders. A roomy rear cargo area loads at bumper height (though that height is, uh, kind of high) and has several tie-down hooks and a tray for incidentals under the floor pad. For bigger loads, rear seats fold in a 60/40 split, and when down, rest nearly flat. The rear cargo cover folds and stows out of the way atop the spare tire.

The 2016 front-wheel-drive NX 200t F Sport starts at $38,365. That includes model-specific bits like a perforated-leather steering-wheel wrap, paddle shifters, fog lights, LED daytime running lights, and F Sport door-sill scuff plates. However, CG’s tester was elevated to $46,440 with delivery and a thorough complement of options. The navigation package now includes Lexus Enform Remote, which can remotely start the engine or lock and unlock doors via smartphone. There you go: something new after all. 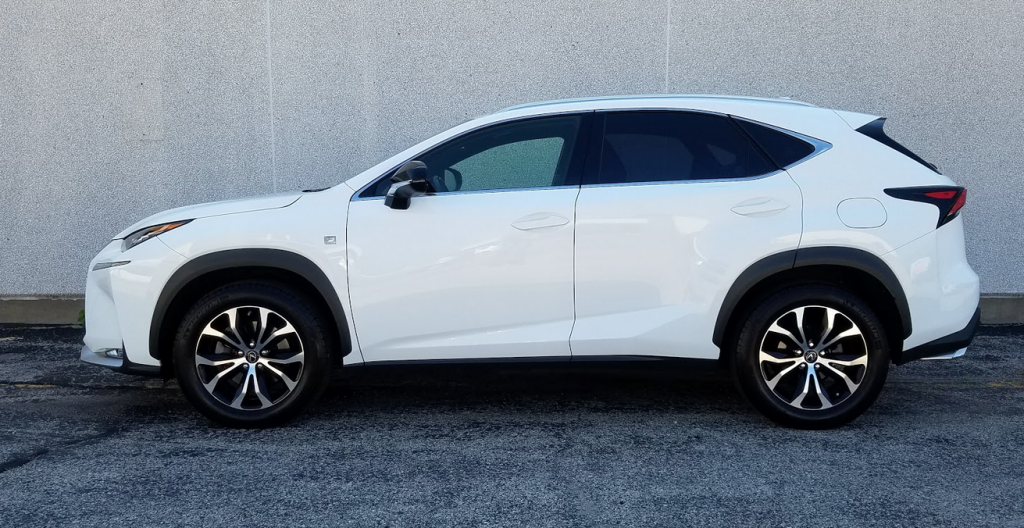