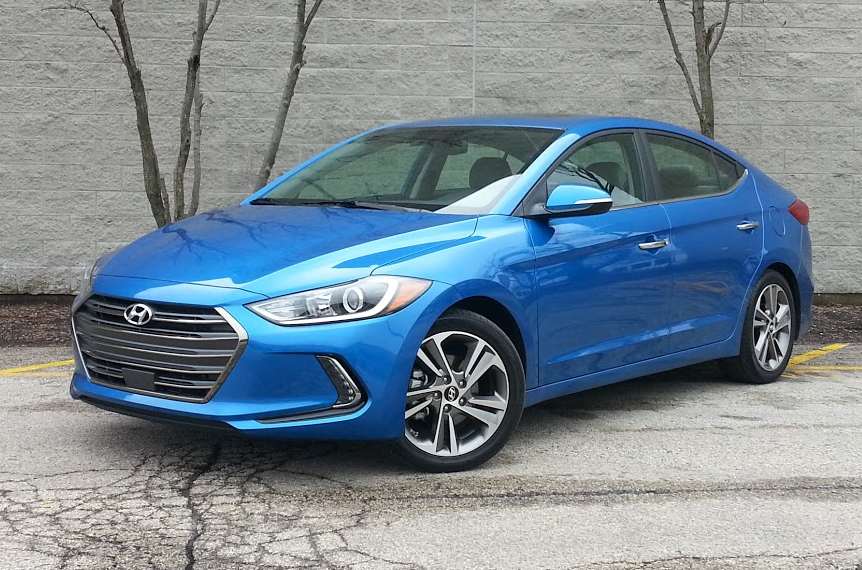 The not so good: Cabin trim disappoints for top-line trim level

The constant churn of product in the compact class has the Korean company as the latest automaker to update its wares, producing an all-new Elantra sedan for the 2017 model year. In a broad sense, the fastbacklike profile will seem familiar but the new model is an inch wider and almost an inch longer than the current model. Its most glaring appearance change is adoption of the big hexagonal grille design that has become a Hyundai styling cue. Beyond that are a pair of new powertrains, and added tech features for safety and convenience. 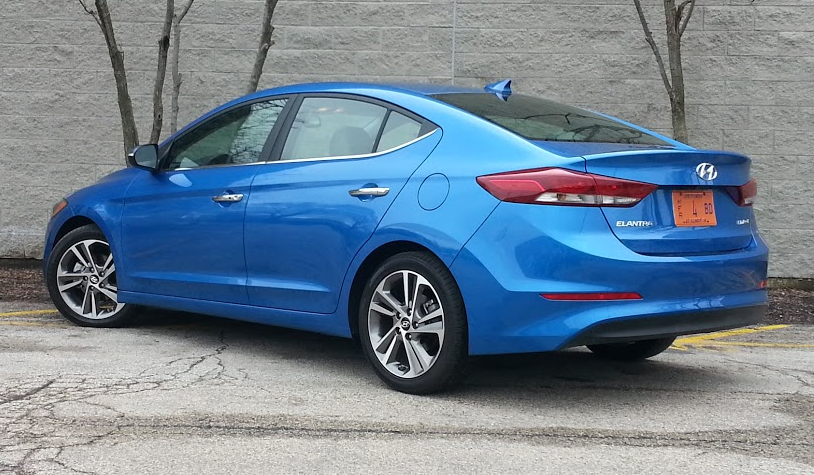 The redesigned-for’17 Elantra is about an inch longer and an inch wider than the outgoing model. The swoopy, almost-fastback roofline cuts into rear-seat headroom a bit.

It all adds up to a better compact sedan—just maybe not the best one in the class.

Consumer Guide® tried out the Elantra Limited, the higher grade of the two trim levels initially available—the SE is the other, though an Eco model was due to come out in short order. The test car was powered by a 2.0-liter four-cylinder engine new to the Elantra, and a six-speed automatic transmission. (The SE uses this same engine, but with a choice of automatic or six-speed manual gearbox. A 128-horsepower 1.4-liter turbocharged engine with seven-speed dual-clutch automated-manual transmission is slated for the Eco.) 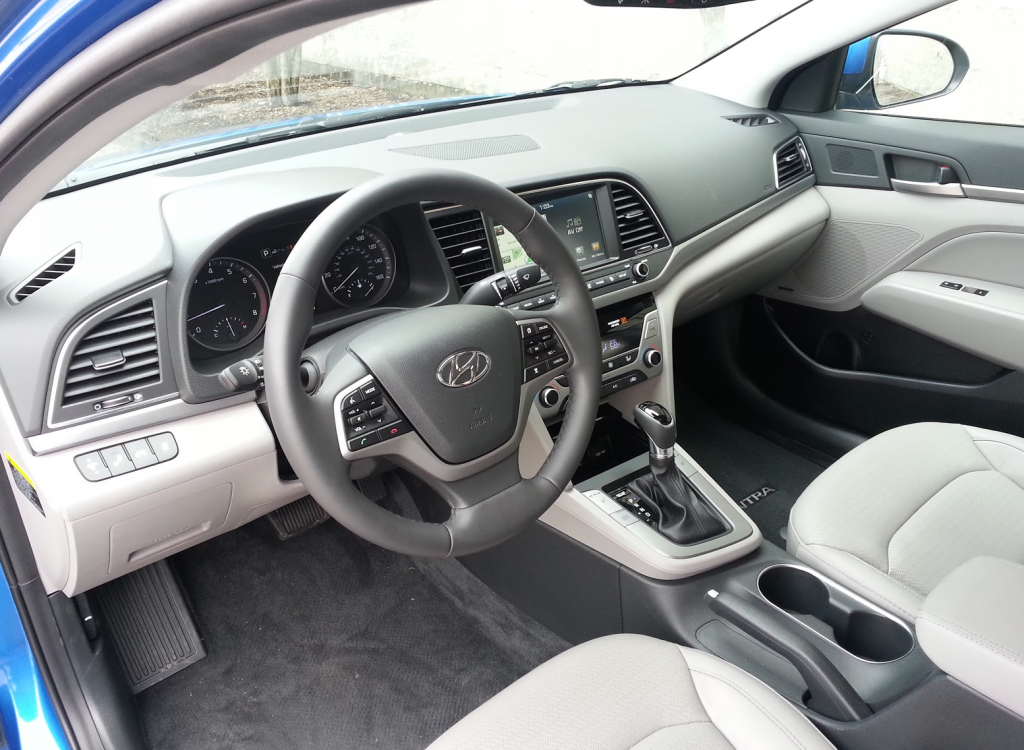 Elantra Limited’s cabin is nicely assembled, but feels a bit lackluster when compared to class rivals such as the Honda Civic.

The 2.0-liter makes 147 horsepower, which is a couple more ponies than the previous Elantra’s 1.8-liter engine could summon. However, with just 132 lb-ft of torque peaking all the way up at 4500 rpm, performance isn’t eye opening. This powerplant gets a little noisy when put to the test, and the automatic transmission can be somewhat slow to kick down. A “Drive Mode Select” feature adjusts throttle response (and steering effort) but punching up “Sport” mode in place of “Normal” or “Eco” provides only a very slight improvement in acceleration.

In pursuit of improved economy, the engine’s valvetrain employs the Atkinson-cycle principle, which sacrifices some power for more efficient use of fuel. The EPA rates the Limited’s powerteam at 28 mpg in city driving, 37 in highway use, and 32 combined. This driver averaged 27.4 mpg from a trip of 111 miles, 70 percent of which was in city-style driving.

Hyundai devoted some time and energy to revamping the Elantra’s suspension. The result is a fairly well composed and comfortable small-car ride. Steering behavior, while not bad overall, gets an nth firmer—and better—in the Sport setting. Note that the Limited comes with four-wheel disc brakes, while the SE is equipped with drum brakes in back. 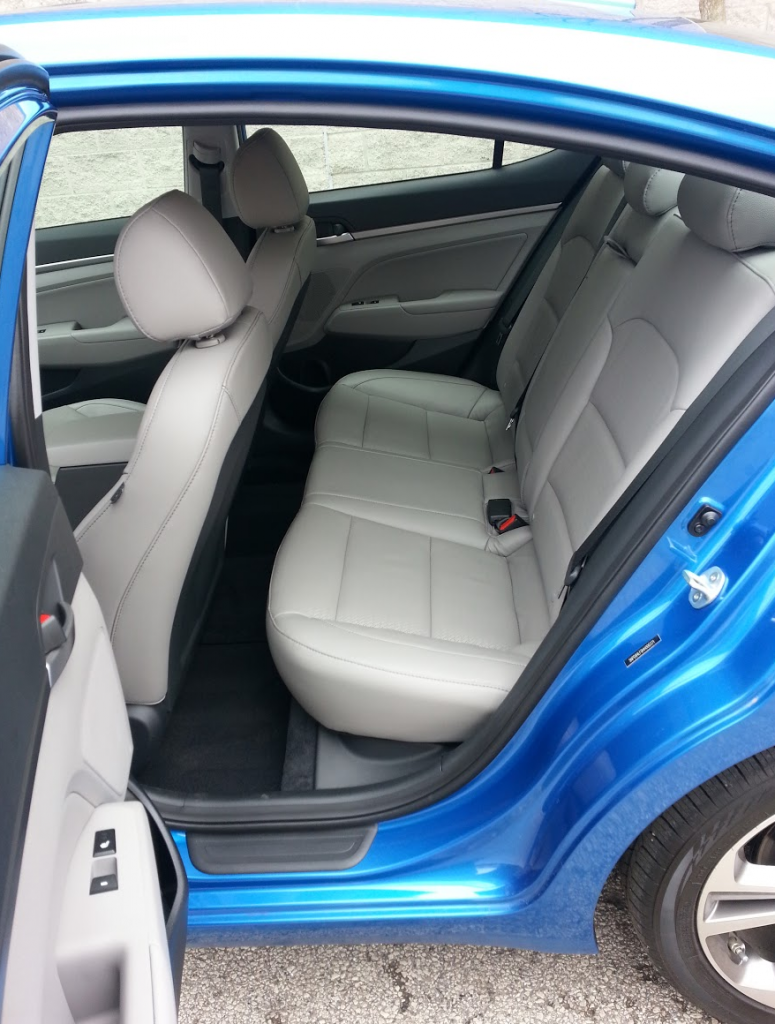 The Elantra sedan’s second-row space is fairly limited. Shoppers looking to regularly travel with adults in the back seat may want to look elsewhere.

Even the upmarket audio system is easy to use. Distinct volume and tuning knobs make selecting and saving station presets a “get-to-it-and-do-it” snap. Just as direct are the climate controls with temperature-setting dials but buttons to operate other functions.

Less user-friendly is a rear seat that will get cramped if tall occupants are riding up front. When this tester, who stands 5’-10.5”, sat behind the driver’s seat as set up for him, his knees were up against the seatback. Effective adult capacity is four. At least they’ll all find enough headroom to be happy. Their stuff will fit in a big glove box, a smallish covered console box, and a covered bin with auxiliary/USB ports and two 12-volt plugs, and a net pouch on the back of the front-passenger seat. Pockets in all four doors incorporate bottle holders, and there are pairs of cupholders in the console and in the rear pull-down center armrest.

The flat-floored trunk features a low liftover and good space for a compact. Small items might fit under the floor in the well around the mini spare. The rear seats fold a few inches above the level of the cargo floor, which might complicate some loading, as will the bulkhead behind the seats that narrows the threshold between trunk and cabin.

The concentration of comfort, convenience, and safety features packed into the 2017 Elantra test car certainly bring it in line with the rising expectations for modern compacts. For instance, many of the same bits of equipment were found on a $27,000-plus 2016 Honda Civic Touring that CG tested a little earlier. However, the Honda boasts better rear-seat room, nicer cabin materials (true soft-touch surfaces in the Hyundai were limited to door centers, armrests, and the console-box lid), lots more power from its 1.5-liter turbocharged engine, and better fuel economy to boot. Nobody said it would be easy in this class. 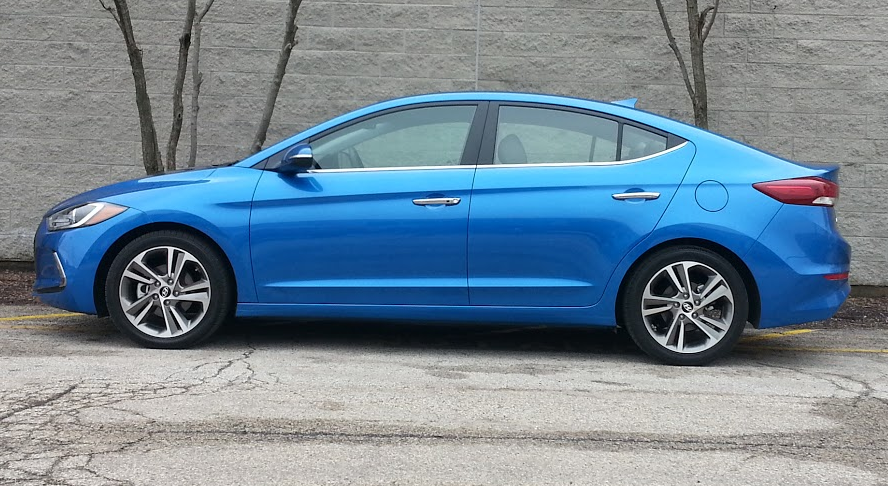