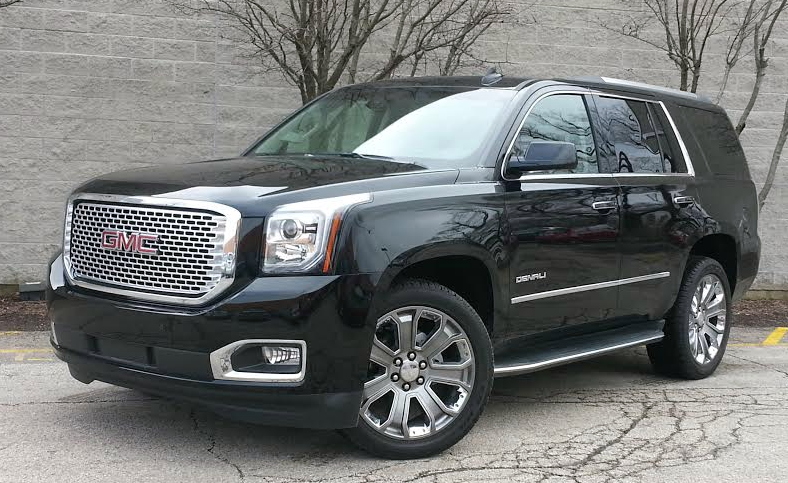 Denali’s signature “chain mail” grille is what separates the top-end Yukon from its lesser stablemates. It also likely contributed to our tester’s $74,000 sticker.

The not so good: Less-than-expected headroom 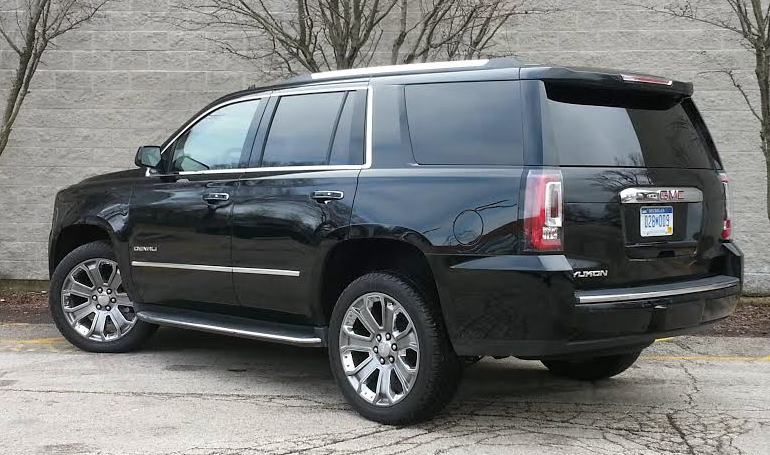 You get quite a lot of truck with the GMC Yukon Denali, what with a big V8, three rows of passenger seating, and 8100 pounds of towing capacity with four-wheel drive. You get a lot of luxury vehicle, too, with soft leather upholstery, genuine wood interior accents, and abundant comforts and conveniences.

Don’t feel guilty: You’ve certainly got all of this coming to you if you lay out the $74,330 that the example Consumer Guide® tested cost. Don’t feel alone, either. GMC reports that more than 60 percent of sales for its Yukon full-size sport-utility vehicles are for top-end Denalis.

What all those Denali buyers are getting in 2016 is a slightly updated version of a vehicle that was completely redone for 2015. Apple CarPlay capability has been added to the IntelliLink infotainment system, there’s a capless fuel filler, two new extra-cost paint colors—Crimson Red Tintcoat and White Frost Tricoat—are available, and the Enhanced Security Package option adds liftgate lock shields and vehicle-inclination sensors. 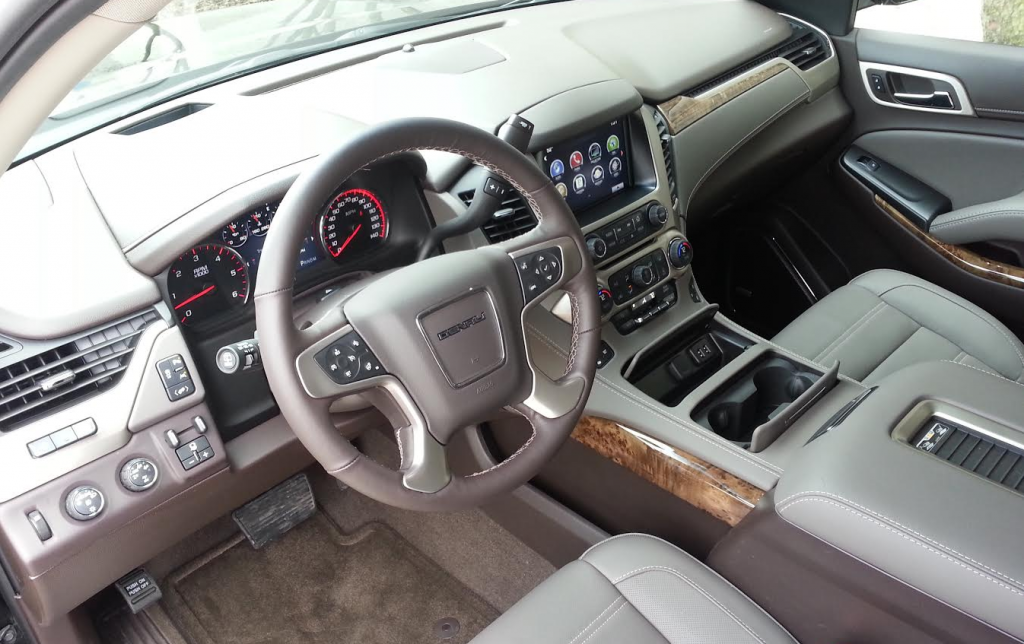 The interior boasts nice materials, an easy-to-use infotainment interface, and a wireless cell-phone charging pad atop the console lid.

Power comes from a ready and able 6.2-liter V8 hooked to a smooth eight-speed automatic transmission. The 420 horsepower keeps things going at a good clip, but it’s the hefty 460 lb-ft of torque that gets things moving in the first place. The engine incorporates cylinder deactivation to cut back fuel use in low-load situations, and, frankly, the Denali could use all the help it can get here. EPA-rated at 15 mpg in the city and 21 on the highway with four-wheel drive, the truck got just 12.67 mpg in this driver’s 65.9-mile weekend test stint, 77 percent of it city-style driving.

Ride benefits from the standard Magnetic Ride Control continuously adjusting dampers. Shock from road imperfections was pretty well stanched—and with standard 20-inch wheels instead of the extra-cost 22-inchers that were on the test vehicle, it might have been slightly better. Tall and wide, there’s a little body pitching in lane changes or following bends in the road, but no need of constant steering corrections.

Interior room is excellent in the first two rows of this three-row, eight-passenger vehicle. So is seat comfort. The third row, however, rests on a raised floor that will have adults sitting with their knees practically up to their chins. Legroom is negligible, and headroom is reduced somewhat. This area is really for a younger crowd. Soft-to-the-touch materials are generously applied around the cabin. 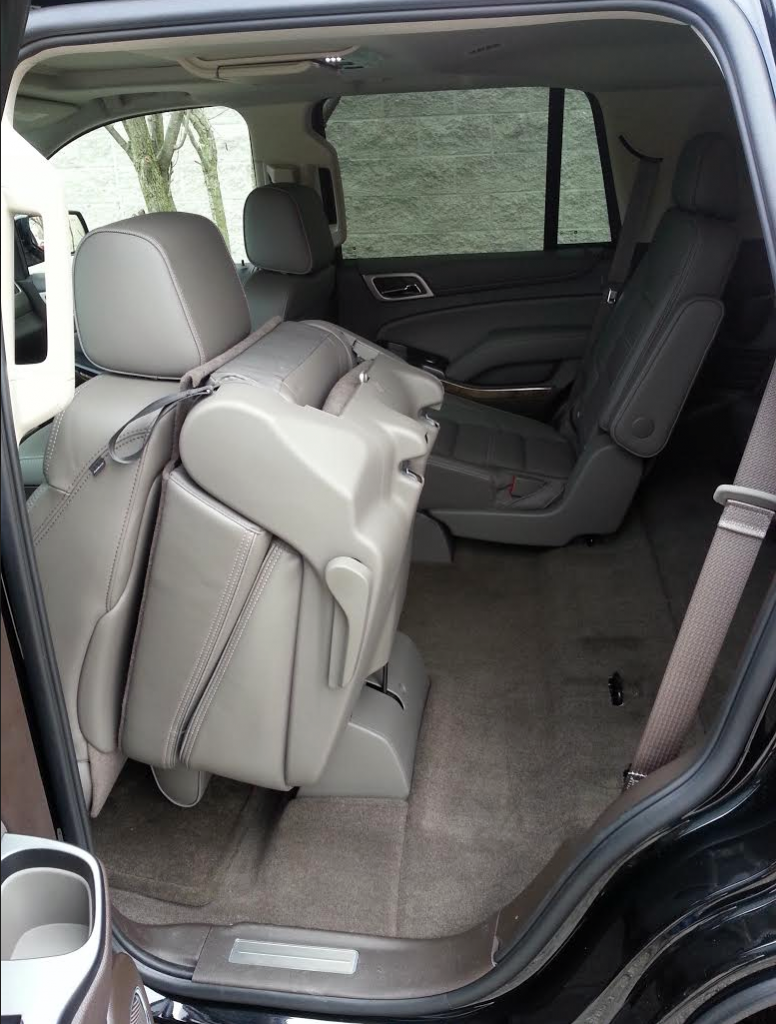 The second-row seats fold and flip forward to allow easier access to the third row, which isn’t quite as hospitable to adults as the size of the vehicle suggests.

Controls are highly legible, especially the large speedometer and tachometer dials and the virtual auxiliary gauges that are part of the programmable vehicle-information display. An eight-inch color touchscreen displays navigation, audio, and other information. It was easily direct to select and save radio presets. Buttons at the back of the steering wheel let drivers change stations and raise or lower volume with the press of a fingertip, however the buttons seemed slow to react to requests for changes. Handy rotating dials make fan-speed and temperature adjustments; buttons access functions. Second-row passengers have access to their own climate controls on the back of the center console. The optional head-up display is easily managed from buttons to the left of the steering wheel, but the display view fades when the driver is wearing polarized sunglasses. A convenient dash dial summons a choice of drive including rear-only, four-wheel high, or four-wheel low for off-road use.

Cabin storage is quite good. A good-sized glove box and a cavernous covered console box can stash a lot of personal items. The wireless charger is built into the console-box lid, and the box houses an auxiliary port, USB port, and power point. Another power point and a 110-volt electric plug are secreted under a panel in the forward part of the console; another flip-up lid reveals a pair of cupholders. Middle-row passengers have a cupholder in each door armrest, pouches on the backs of the front seats, and an open bin at the base of the console. Further cupholders and a small bin are found in the third row. Expansive map pockets with room for bottles are found in the front doors, with much smaller pockets in the rear doors.

With all three rows of seats up, there’s not an abundance of cargo space available—just 15.3 cubic feet. The rearmost seats are split 60/40 and power down via buttons on the right sidewall of the cargo bay, and up to 94.7 cubic feet of space opens when the second row seats are folded, too. The retracted seats form a flat load floor, which is actually raised a few inches above the height of the bumper. While this certainly levels the floor with the lowered seats, it does add some lifting to whatever cargo is being loaded. Standard automatic rear load leveling adjusts for whatever is brought on board. 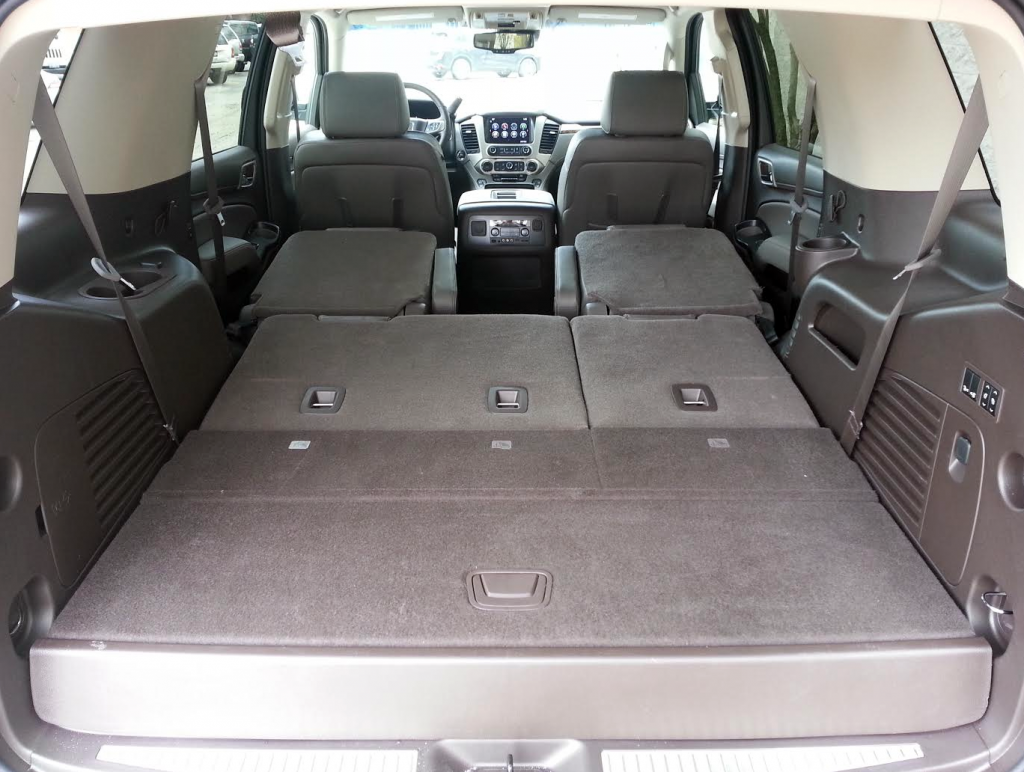 What is as big as the size suggests, however, is the load capacity with all seats folded down. Oddly, there’s about a 4-inch step-up at the rear of the floor that requires lifting a load that much farther over the opening to clear the lip.

The 4×4 Denali starts at $68,045 (a $3000 jump over the two-wheel-drive model). CG’s tester was plumped up with extras including the head-up display, bigger wheels, Open Road Package (with sunroof and rear entertainment system), and the Enhanced Security Package. There’s more where that came from, too, in case you don’t think a lot of Yukon Denali is quite enough.