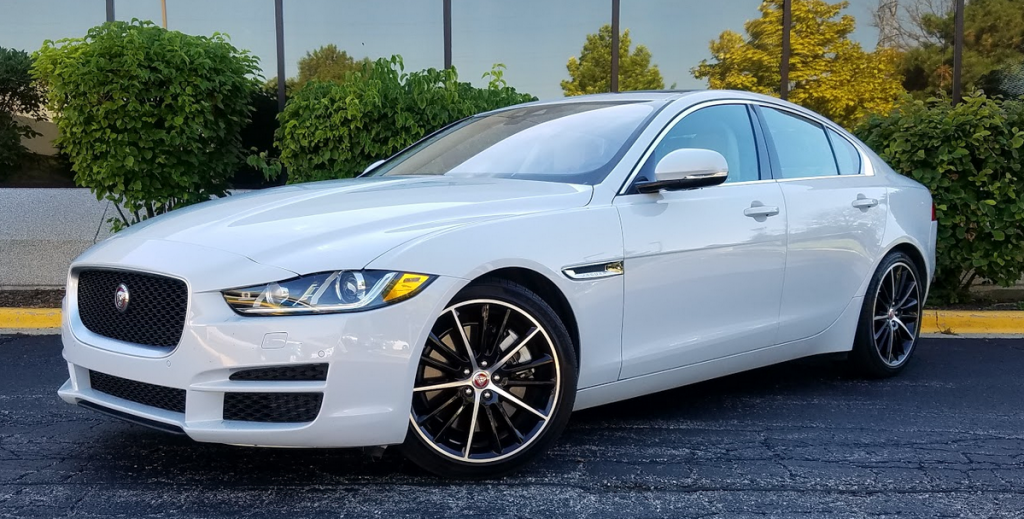 The not so good: Pricey options, tight rear-seat accommodations

Jaguar is taking things that it has used to build bigger cars and applying them to a new small car that makes its debut for 2017.

That new member of the premium compact class is the XE, Jaguar’s first compact car in almost a decade. Like other Jags, it employs the British manufacturer’s weight-paring aluminum-intensive body structure. Meanwhile, it picks up a couple engine choices and an eight-speed automatic transmission from the midsize XF sedan. 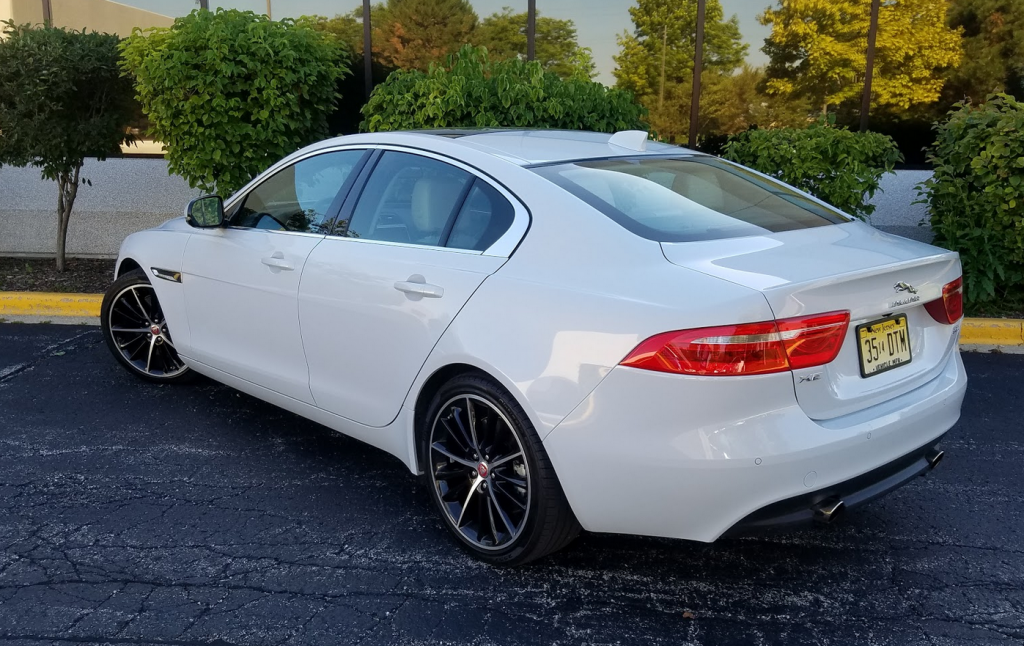 The XE is considerably smaller than the next rung up on the Jaguar ladder. With a wheelbase of 111.6 inches, overall length of 183.9 inches, and width of 77.4 inches (with the mirrors folded), the XE is 4.9 inches shorter between the wheels, 11.1 inches tidier bumper to bumper, and .8 inch narrower than the XF. Base weight for a V6-powered rear-wheel-drive Prestige-trim XE like the one that Consumer Guide® test-drove is listed at 3605 pounds—165 pounds less than a comparably configured XF weighs. 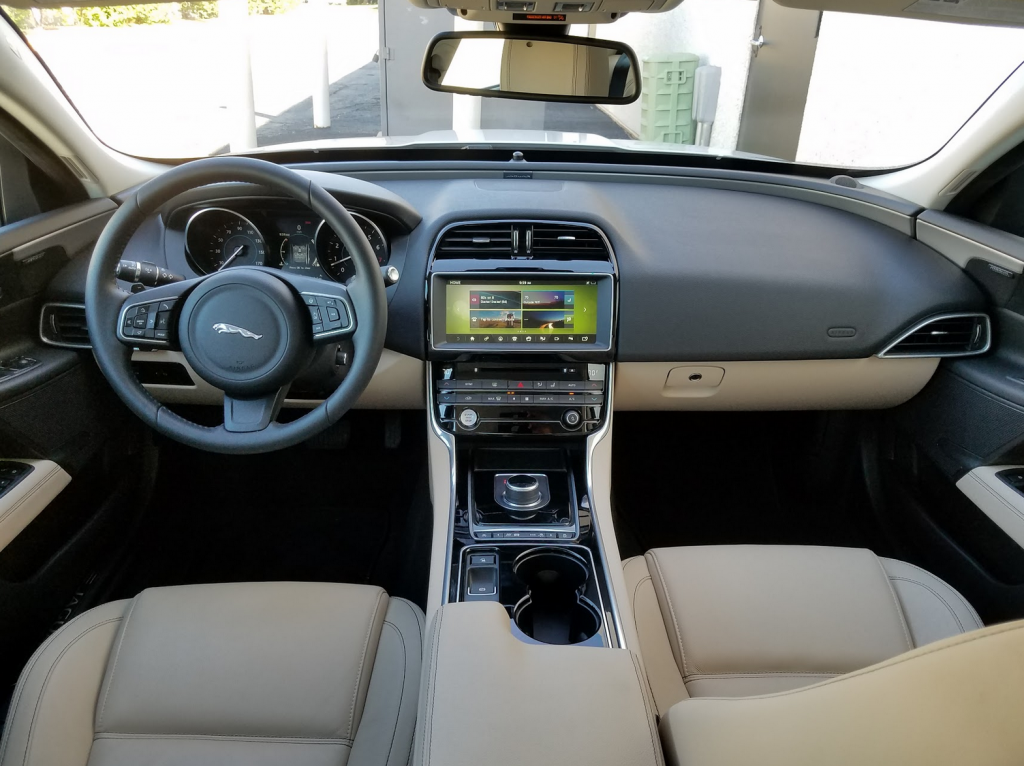 The XE boasts firm yet comfortable seats, along with high-end cabin materials and excellent assembly quality.

Like the ’17 XF, the inaugural XE comes with a choice of 180-horsepower turbodiesel 2.0-liter four-cylinder engine or a 340-horse supercharged 3.0-liter V6, and the option of rear- or all-wheel drive. (The XE is also built with a 240-horsepower turbocharged 2.0-liter gas four available solely with rear drive.) The 35t, as the V6 version is known, comes in a range of Premium, Prestige, and R-Sport trim. The Prestige starts at $45,600 with a complement of standard equipment that includes Jaguar’s “All Surface Progress Control” (a low-speed cruise control for use in reduced-traction conditions), brake-enabled torque vectoring, 19-inch alloy wheels, leather upholstery, heated 10-way-adjustable front seats (with memory function for the driver’s seat), 40/20/40 folding rear seat, heated steering wheel, keyless entry and starting, moonroof, rearview camera, InControl Touch infotainment and smartphone-connectivity system, navigation, uprated Meridian sound system, and HD radio.

CG’s test car had plenty more items on it, but they pack on price as much as they pack in features. The car’s Glacier White metallic paint, black-tone wheels, and satellite radio all cost extra. Then, too, there were two packages—Vision and Technology—that each easily cleared $2000 and helped to elevate the sticker price with delivery to a not-inconsequential $53,595. Some of the things that cost extra on the XE Prestige are items people are coming to expect in modern cars like blind-spot monitoring and rear cross-traffic sensing—both available in the Vision Package.

While the XE’s value per dollar can be debated, there’s less fault that can be found with its on-road performance. The supercharged V6 and eight-cog automatic combine for lively acceleration—somewhat more so when standard “JaguarDrive” is clicked into the “Dynamic” setting to modify throttle response. (“Normal,” “Winter,” and “Eco” modes are available too.) EPA fuel-economy estimates for the V6/rear-drive combination are 21 mpg in city driving, 30 mpg on the highway, and 24 combined—each one mpg higher than AWD V6s are supposed to get. With a mix of Dynamic and Normal settings—and switching off the somewhat obtrusive automatic stop/start feature—this driver recorded 20.5 mpg after a stint of 193 miles, 70 percent of which was in city-style conditions. 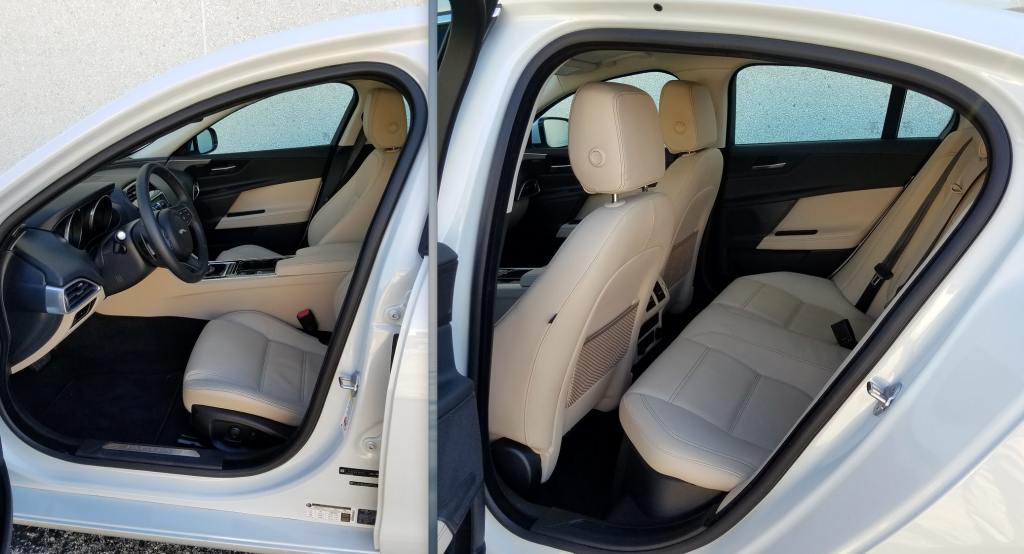 Larger folks will find the XE’s small front-door openings an impediment to entry and exit. Rear-seat head- and legroom are limited, especially with the front seats adjusted far back.

In addition to tweaking throttle action, Dynamic mode also firms up steering feel a little bit—not that the car can be found lacking in the base setting. It corners and rides well, and quietly at that. Brakes are quick and predictable when going about their work.

Seats are quite comfortable. Leg- and headroom are better in front than in the back, but two adults of average height will fit in back without a problem—provided front passengers don’t have to track all the way back in their seats. The XE’s roofline also crimps driver vision to the rear and rear corners somewhat, and rear doors that are narrow at the bottom can complicate exits. 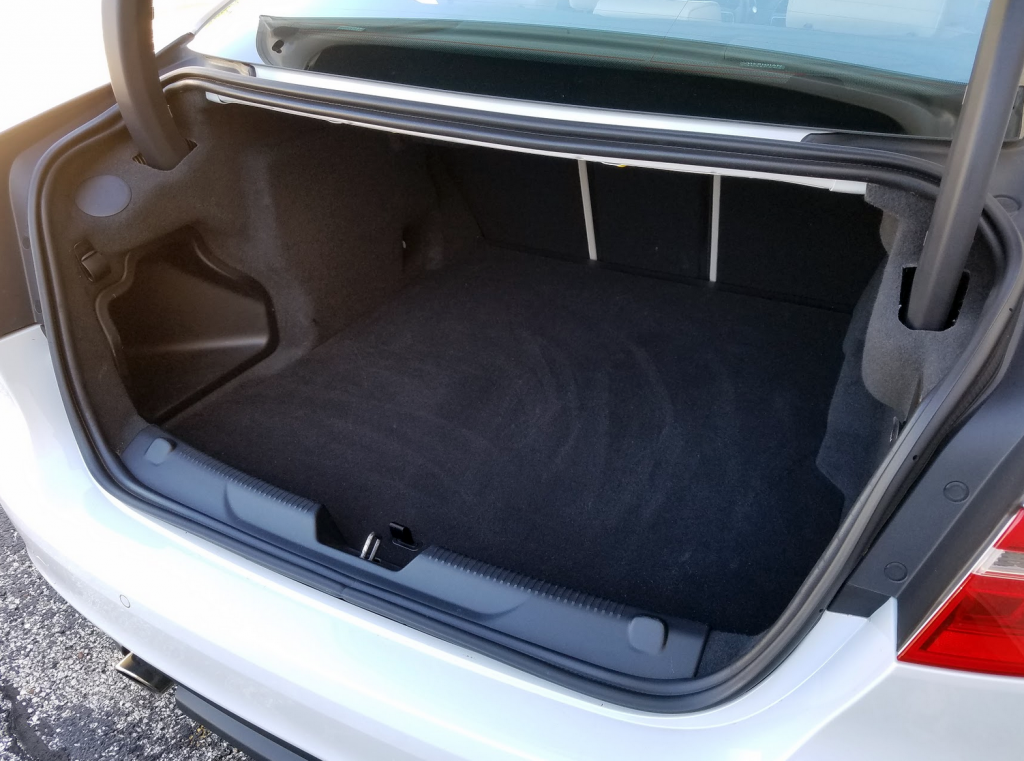 Overall trunk space is decent for the class, though a somewhat stingy aperture can make it difficult to load large items.

In other ways, the interior is inviting, with good use of soft-touch surfaces on the dash and a substantial portion of each door panel. The light-tan-and-black interior in the test car was attractive and nicely assembled.

Controls show up well. The vehicle-information display between the speedometer and tachometer dials calls up a host of menus summoned by the thumb buttons on the steering wheel that can, in all honesty, be a bit time (and attention) consuming. Audio, navigation, and other functions are handled on a touchscreen that presents readily available choices for what a driver wants to access. The Technology Package added to CG’s test car included a 10.2-inch screen (in place of the standard eight-incher). This bigger screen incorporates virtual buttons on its surface that are physical push buttons on the base unit. Radio stations can be tuned directly and saved as presets with the tap of a fingertip. Climate control is handled by a double row of push buttons below the touchscreen.

The benefits of a sizable glove box are tempered by a small-capacity console box that houses auxiliary and USB ports, a card slot for the navigation system, and a power point. Door map pockets are larger in front than they are in the rear. Net pouches are affixed to the backs of the front seats. Twin open cup holders reside in the console; two more are built into the pull-down center armrest in the rear.

The trunk floor is flat and high enough for easy loading and unloading, but restricts the height of objects placed there. Space between the wheel houses is somewhat restricted but the front-to-back space is good for a car of this size. When the rear seats are folded for extra capacity, they rest nearly flat, albeit about 1.5 inches below the level of the trunk floor.

All in all, the XE has the look and feel of a contemporary Jaguar sedan, and it starts off with an intriguing price for its class. Where it finishes, well, that can be another story.

The XE gives Jaguar an entry-level car with which to challenge the Audi A4, BMW 3-Series, and Lexus IS.