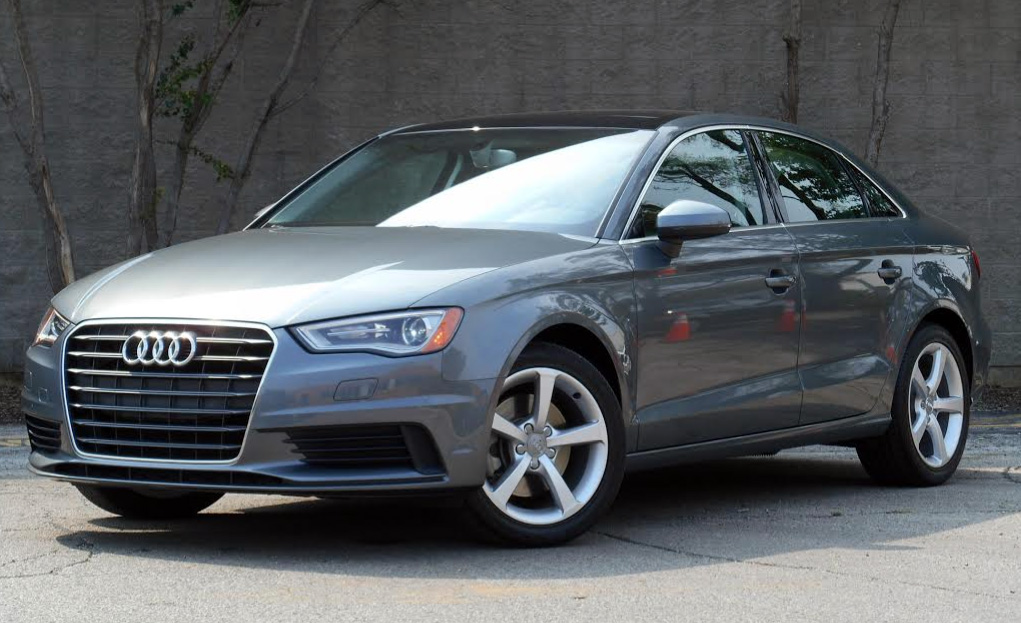 The not so good: Cabin trim falls somewhat short of expected Audi standard

Click here for more A3 price and availability information

The A3 is no stranger to the Audi lineup, but the 4-door sedan now parading around with that badge on it certainly is. It brings a new transverse engine architecture and the latest version of the German automaker’s MMI control for infotainment systems to the A3, now a player in the new class of smallish luxury cars (think Mercedes Benz CLA-Class and BMW 2-Series), and a lure to younger buyers with a taste for tech.

But is it a great car? 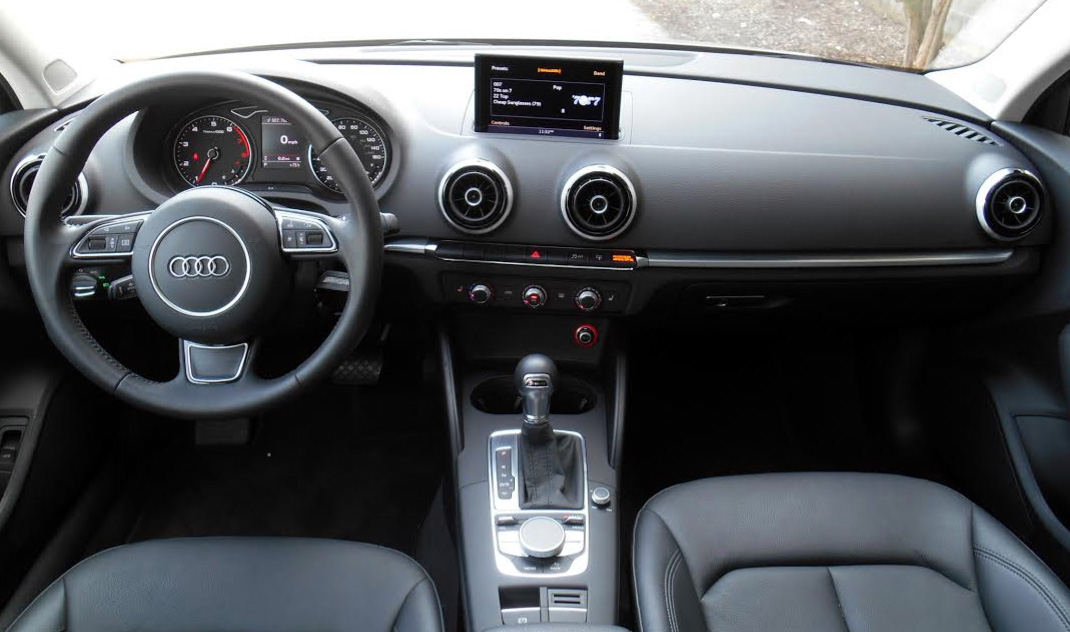 The A3’s cabin looks like that of a European sports sedan, but not all the surfaces are padded, and bright trim accents come as part of a $450 package.

The A3 picked up 2015 World Car of the Year honors, so it certainly has its boosters. Perhaps they drove more-powerful quattro-equipped cars from higher trim levels with more bells and whistles than the base Premium model with the 1.8-liter 4-cylinder engine and front-wheel drive that Consumer Guide® tested. That one was certainly all right, but considering it a world-beater might be a stretch.

In this driver’s urban commute, the turbocharged 170-horsepower base engine delivered good, not great, performance with a whiff of turbo lag. It was connected to a 6-speed automatic transmission that didn’t seem to suffer much from the jerkiness that manifests itself in some other double-clutch automatics. This tester put 126.9 miles on the car and averaged 26.37 mpg. That’s pretty close to the EPA-estimated 27 mpg for combined city/highway driving. (Sixty-three percent of the miles in my stint were under city conditions.) EPA figures are 23 mpg for pure city driving and 33 for all-open-road motoring.

Steering and braking were pleasingly responsive. Ride was competent but not cushy. It took some higher expressway speeds to finally produce wind noise that disturbed the peace in the cabin.

A front-drive Premium like the one that CG drove starts at $29,900, and it seems Audi had to try to get under $30K. Expected “luxury-brand” touches like push-button start, power-adjusted passenger seat, and a back-up camera either can be added for extra cost or require stepping up to Premium Plus or Prestige trim levels. Displays for audio, optional navigation, and other things appear on a flat screen that slides up from the top of the dash. The information here is accessed and manipulated by the MMI controller on the console. The latest version of MMI found in the A3 can be optioned up to include voice control and a central knob with a top surface that you can “write” on. They can teach it to light your pipe and fetch your slippers for all I care, but MMI is still pretty complicated to work, with lots of steps required to get anything done. 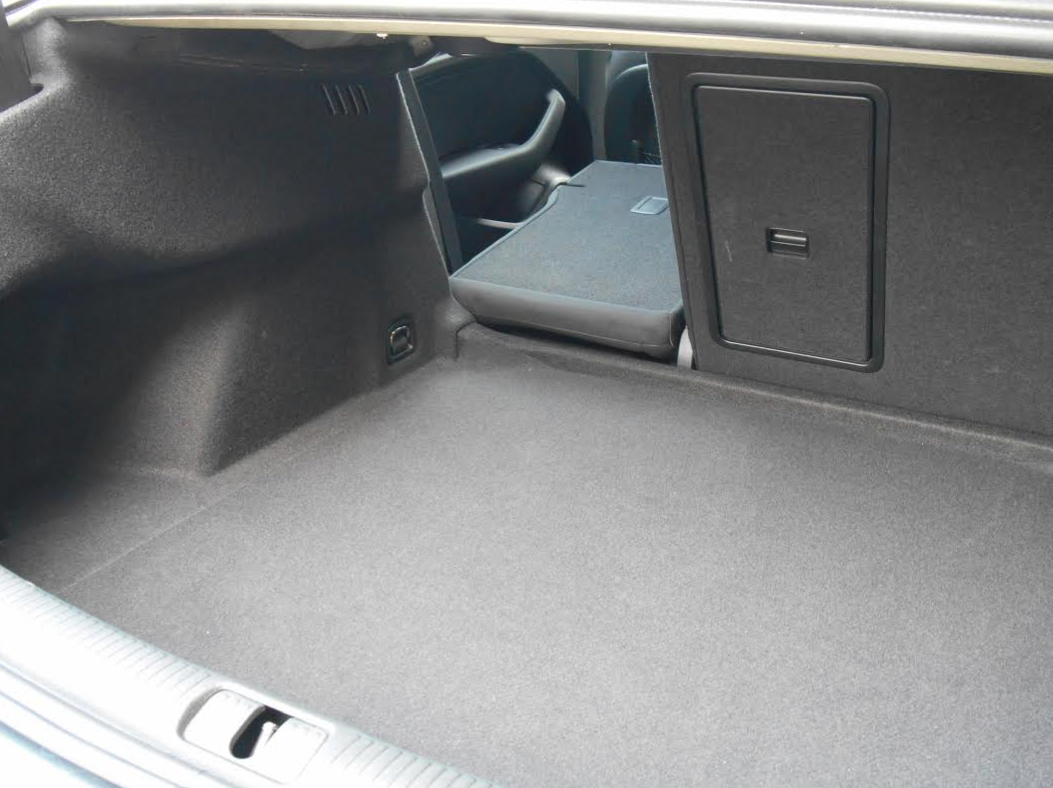 The A3’s rear seat back does fold, but not flush with the floor. The seat back includes a handy ski pass-through.

The A3 fills an entry-level-sedan role that used to be handled by the compact A4. As the A4 has crept up in size, it has left room for the new A3 to have dimensions similar to earlier A4s. Still, for its tidy size, it doesn’t put the squeeze on passenger room. Even rear-seaters—just 2 will fit—will find acceptable leg room unless front-seat passengers need full extension. There’s just enough head room front and rear, too, thanks to a roof that was obviously designed with the understanding that people with heads often ride in the back of sedans.

Interior-materials selection was a mixed bag. Leather seats and a leather-wrapped steering wheel come standard on the Premium, and an “Aluminum Style” option package was added to our test car to brighten the surroundings a bit. There are soft-touch surfaces atop the doors, door arm rests, and dash, but grained hard plastic is hard to miss on other parts of the dash and door panels. It’s a slight come-down from Audi, which has earned a reputation for executing rich, sophisticated interiors.

Instruments show up well. Standard dual-zone climate controls are, mercifully, separate from regulation by MMI, so you can get warm or cool in a hurry via a clearly marked panel of dials and buttons. The info center in the middle of the instrument cluster offers lots of data choices (the trip odometer registers 3 different ways for example). Thick B-pillars and the passenger-seat head rest can get in the way of visibility to the side but, overall, the view through the 6-window roof makes things easier on the driver.

Interior cargo space is so-so. The glove box is small. The console has 2 open cup holders and a small tray near the front. There’s an adjustable center arm rest, but rather than being the lid atop an enclosed storage space, it is poised over a shallow open tray with a USB cable in it. Door pockets are large, however. Net pouches are affixed to the back of the front seats. A pull-down center arm rest in back houses a shallow covered storage area and 2 pop-out cup holders.

For a car of its size, the A3 has a decent flat-floored trunk, albeit with a tall lip. There’s a ski pass-through, too, and the rear seats fold in a 60/40 break, though they sit several inches higher than the trunk floor.

In addition to already-mentioned standard equipment, the A3 Premium comes with 17-inch alloy wheels on all-season tires, 4-wheel disc brakes (ventilated in front), electromechanical speed-sensitive power steering, panorama sunroof with retractable shade, xenon headlights and LED taillights, 12-way power driver’s seat, AM/FM/satellite-radio/CD audio system with SD card reader, and Bluetooth connectivity. A half-dozen appearance, comfort, and convenience options ran up the tab on CG’s test car to $34,345 with delivery—and that would have been $350 higher if not for a credit granted for scaling back to single-zone climate control. In case you’re wondering, there still was no push-button start, power passenger seat, or back-up camera for that money.

Ever wonder what’s behind the Audi interlocking-ring logo?