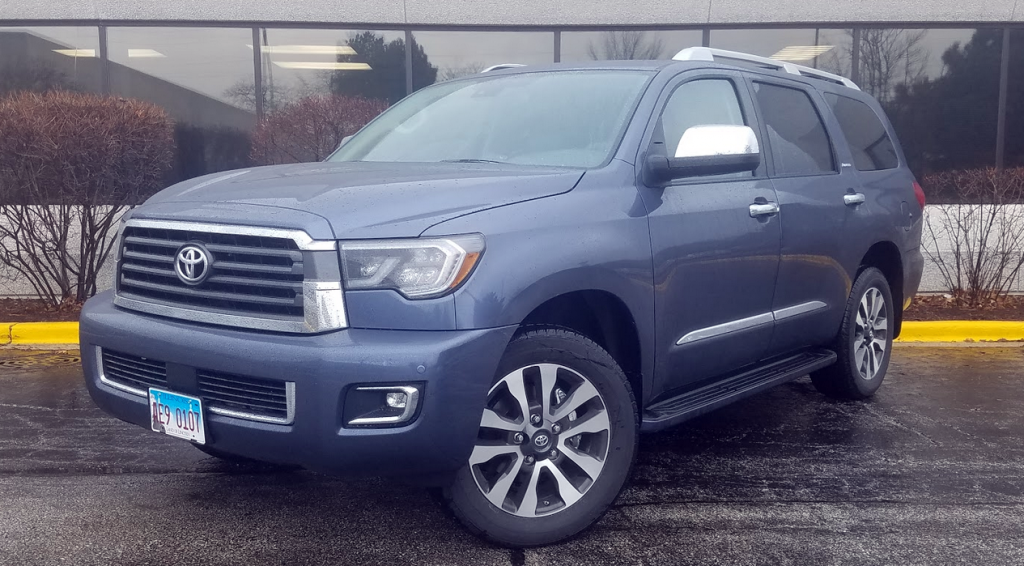 The great: Decent ride and handling for the size, projected reliability

The not so good: Dismal fuel economy; Sequoia’s basic design is the oldest in the large SUV class, and it shows

The Toyota Sequoia is an interesting animal. Compared to the other vehicles in the large SUV class, this big rig is relatively low tech, relatively small, and relatively simple in how it’s offered.

Addressing the last point first, Sequoia is only offered in four trim levels,with one engine and one transmission. Those trim levels consist of the entry-level SR5 ($51,625), off-road-oriented TRD Sport ($54,340), well-equipped Limited ($60,020), and luxury-level Platinum ($67,335). (All listed MSRPs are for 4WD models; rear-wheel-drive versions are also offered at $3225 less across the board.) Our test Limited model came equipped with a premium JBL audio/navigation system package ($1250) and carpeted floor mats ($335), which nudged the bottom-line price to $62,900. 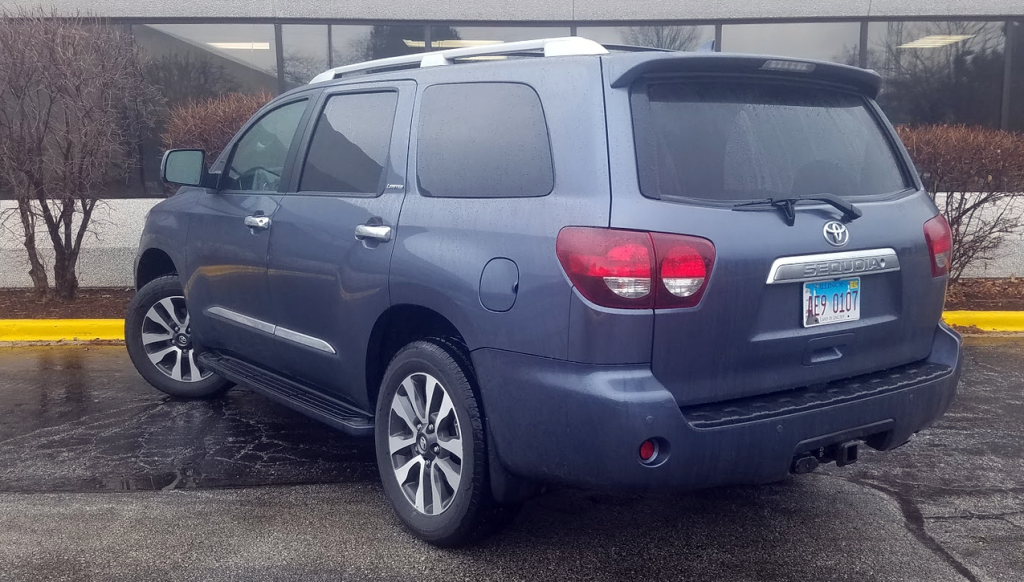 The Limited trim level is second only to the top-line Platinum in the Sequoia’s model roster. Standard features include 20-inch alloy wheels, running boards, heated auto-dimming mirrors, and a tow-hitch receiver.

As for being small, Sequoia measures 205 inches in overall length and is 80 inches wide. The regular-length Ford Expedition stretches an additional 5 inches overall, and is 4 inches wider. And, unlike the Expedition (and GM’s full-size SUVs), there is no long-wheelbase version of the Sequoia available.

As for being low tech, the Sequoia’s basic design dates all the way back to the 2008 model year. Though the Sequoia has received its share of updates over the years, its age still shows in many ways. The center information screen is small, the graphics are simple, and neither Apple CarPlay or Android Auto device interface is available.

The Sequoia’s dashboard layout betrays its age–the infotainment system isn’t as graphically appealing or feature-rich as newer systems, and the screen is noticeably smaller too. Still, the interior is very spacious and nicely assembled.

All that said, Sequoia does come standard with a lane-departure warning system, and an obstacle/pedestrian-detection system with brake assist.

Whatever Sequoia’s marketplace liabilities, we found the big SUV a likeable beast. Power from the 5.7-liter V8 comes on early and provides ample acceleration from a stop or for passing or merging. The smooth-shifting automatic works well with the engine, and provides lag-free shifts. 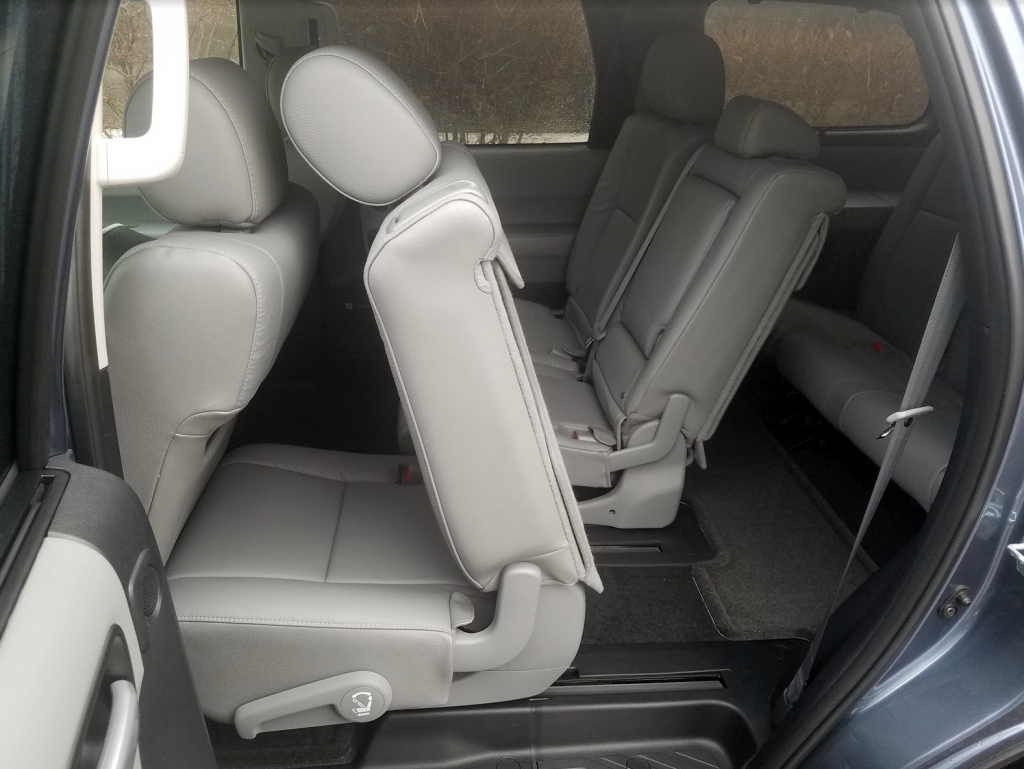 The second-row seats tilt and slide forward to create a fairly generous passageway to the third row.

We were fortunate to spend some time with Sequoia driving through snow, and found it more than capable of dealing with 3-4 inches of accumulation.

Though not especially roomy for the class, Sequoia settles in nicely for long trips. Two of our editors enjoyed a Chicago-to-Detroit round trip in the big Toyota and found it smooth riding, quiet, and comfortable for long periods of time.

Around town, Sequoia feels smaller than it is. Direct steering and a tight turning circle allow Sequoia to be maneuvered through heavy traffic and tight parking garages with relative ease.

After our testing session the Sequoia, our only real complaint has to do with fuel economy. We saw just under 14 mpg over almost 1100 miles of mostly highway driving. That figure compares relatively to the 15.4 mpg we recently observed in a 2018 Ford Expedition with more city driving, and the 15.2 mpg we observed in the more powerful 2017 Cadillac Escalade.

If you can live with the fuel economy, you may find Sequoia’s simplicity almost charming. It’s easy to drive, relatively easy to park, and boasts class-leading resale value. And though it’s not quite as roomy as a Chevrolet Tahoe or Ford Expedition, it does offer considerably more cabin space than a Toyota Highlander, and will likely serve a plus-sized family capably.

The Sequoia’s cabin is slightly smaller than some class competitors, but its still plenty cavernous. There’s 18.9 cubic feet of cargo space behind the third row seats, 66.6 cu. ft. with the third row folded, and 120 cu. ft with both the second- and third-row seats folded–which creates a laudably smooth, level loading surface.

You can debate the perceived strengths and weaknesses of the Toyota Sequoia all day long if you wish (V8 grunt versus fuel greed, interior room versus overall maneuverability, etc.), but one indisputable truth of this large SUV is that it’s a storehouse of storage. 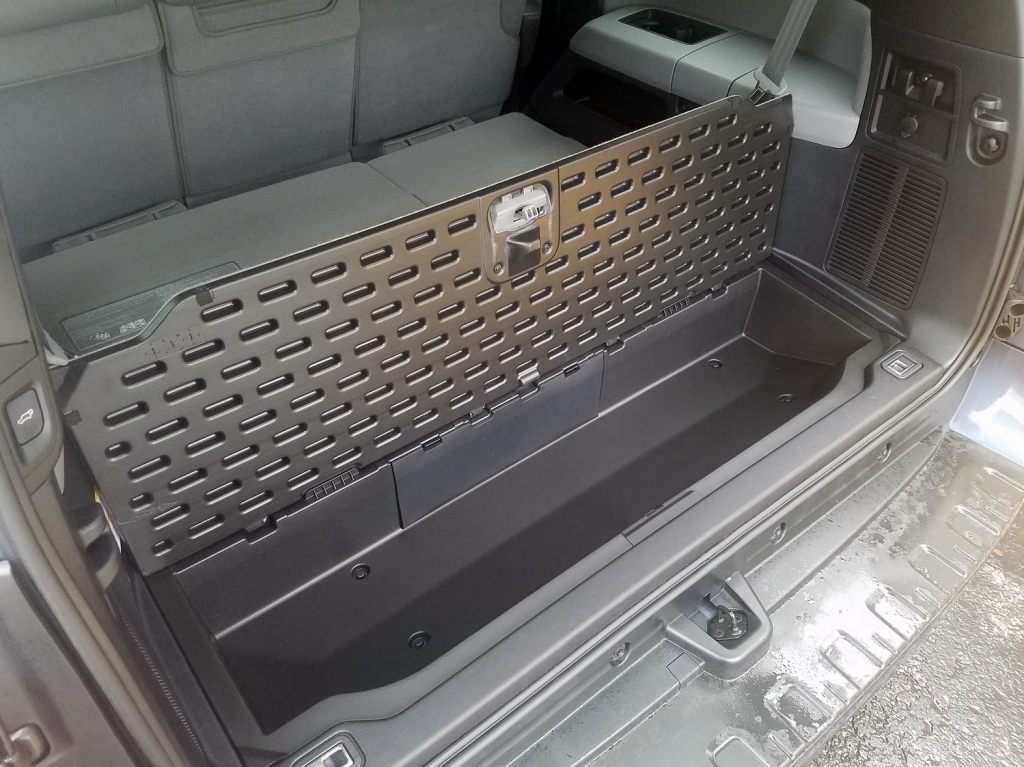 A handy storage bin at the rear of the cargo area is just the ticket for hauling groceries–the flip-up lid keeps things from rolling around.

If you’re fond of bringing personal stuff with you on a drive—and with room for eight, somebody’s bound to carry in something—the Sequoia can handle it. There are twin glove boxes (you need two considering owner’s manuals fill up most of the lower one); a massive covered console box with an adjustable small-item tray; a long, narrow, but deep covered cubby to the right of the shifter; small hinged bins that pivot out from the front-door armrests; big door pockets with twin bottle holders; pouches on the backs of the front seats; and both exposed and covered bins in the sidewalls in the third row. Cup holders are set in the top of the console for front passengers, pop out of the back of the console at floor level for middle-row occupants, and rest in the rear-row sidewalls. In the cargo bay, a wide section that’s several inches deep resides under the load floor just ahead of the bumper.

As Tom mentioned, the Sequoia is a throwback to a different time in SUV history. (The 13.4 mpg this reviewer got from a test run of 188.2 miles certainly drives that point home.) It’s not cutting-edge these days, but it does ride and handle pretty well for its size, offers ample 3-adult seating in the middle row and true grown-up space in the rear, and finally gets Toyota’s full complement of safety technologies. That’s what the 2018 Sequoia brings to the party. Meanwhile, there’s plenty of room for whatever you choose to take along.

Though its basic architecture is really showing its age, the 2018 Toyota Sequoia holds up surprisingly well against its newer-design class rivals in terms of ride quality and maneuverability. However, fuel economy is a real sore spot; even with a majority of highway driving, we averaged below 14 miles per gallon in our testing.