Why I Bought A Genesis Coupe

After comparing several cars in the sporty/performance-car class, Dave bought a 2010 Hyundai Genesis Coupe. Read on to find out why.

I never had a car of my very own, so I told myself that as soon as I got a job and could afford a car, I’d get one. Since I’d be paying for it (and am single with no children), I was going to get what I wanted. I started looking in 2009, intending to buy a new vehicle (to avoid the potential headaches of a used car) from the 2010 model year.

I started by making a list of requirements for my new car:

• A decent amount of horsepower. I grew up driving my parents’ Volvo 240s, so my new car needed some oomph. Also, to keep costs down, I wasn’t going to go crazy and get a big V8.

• Rear-wheel drive. I prefer that layout because front-wheel drive cars can exhibit two less-than-ideal behaviors: torque steer and a higher tendency to understeer in fast corners. And the only all-wheel-drive performance cars on the market at the time were the Mitsubishi Lancer Evolution and Subaru Impreza WRX STI, and they were way out of my price range. So, RWD it was.

• Manual transmission. As an enthusiast, I enjoy shifting my own gears. Sure, I could have considered an auto-stick-shift-without-a-clutch excuse-for-a-manual, but those don’t give that visceral, connected-to-the-car feeling that a true manual trans does.

• Four or five seats. I like to carry friends and stuff in my car, so the car had to be somewhat practical. Plus, if it has a rear seat, I could make the argument that a potential future child’s car seat could fit back there, meaning I could (in theory) keep the car for a very long time.

So, as a recap, we have: decent horsepower, RWD, manual transmission, and four or five seats.

I knew I wanted something sporty, so the contenders in Consumer Guide’s 2010 sporty/performance-car category are listed as follows, except that I crossed out those that are front-wheel drive and those that have no back seat:

The remaining contenders were great candidates. However, I didn’t want to deal with the lack of low-end passing punch, notoriously bad fuel economy, and potentially high oil consumption that were characteristic of the RX-8’s rotary engine, so it fell off the list. Remaining were the Chevrolet Camaro, the Dodge Challenger, the Ford Mustang, and the newcomer for 2010, the Hyundai Genesis Coupe. I was fortunate to be able to test drive all four back-to-back at an automaker-sponsored media event. It also helped that it took place on the Road America racetrack.

After driving all four cars at high speed on the track, these were my mental notes:

• Challenger felt big and heavy. It didn’t accelerate very well with the (then current) 250-horsepower V6 engine, and it wallowed through the turns. Challenger was out.

• Camaro accelerated well with the V6 and handled OK too. But those gun-slit side windows were hard to see out of, not to mention the huge blind spots created by the fat rear roof pillars. And the door sills were so high and seats mounted so low that it felt like I was sitting in a bath tub. Camaro was out.

• Mustang felt good and handled well, but the (then current) 210-horsepower V6 was a real letdown. Plus, any real performance equipment was available in the Track Pack (including a limited-slip differential, special axle ratio, uprated brakes, special antiskid system, sport suspension, and 19-inch alloy wheels), but it was only available on the GT Premium V8 model, for a total cost of $32,530. Since the V6 was a dog, and I wasn’t considering V8s, Mustang was out.

• Genesis Coupe drove well, handled well, and had a 210-horsepower 2.0-liter turbocharged 4-cylinder (as much horsepower as the Mustang’s 4.0-liter V6). Moreover, the 306-horsepower 3.8-liter V6 got better fuel economy than Mustang’s V6. After driving the turbo-four, I noticed that the engine would stay at high rpm after you let off the gas, and, as a result, smooth shifts with the manual trans were difficult. And it would make an annoying, boomy, resonating tone in the cabin. So, forget the 4-cylinder.

Genesis Coupe’s 3.8-liter V6 was more powerful than Mustang’s, and the Hyundai came with a 6-speed manual, whereas the Ford made do with a 5-speed. The high-end Track model that included all the performance equipment I wanted (limited-slip differential, uprated Brembo-brand brakes, sport suspension, 19-inch alloy wheels, rear spoiler) could be had for $31,000. (At the time, the 3.8 R-Spec model that includes these performance goodies but fewer creature comforts wasn’t on the market yet.) Finally, Hyundai’s standard 10-year, 100,000-mile powertrain warranty was the best in the business. Genesis Coupe 3.8 Track won.

Now, to purchase exactly what I wanted. After an exhaustive search of all the dealers in Illinois, the surrounding states (Wisconsin, Indiana, Iowa, Missouri, and Michigan), and other areas, I found the one I wanted: V6, manual trans, Track model, and Karussell White paint. The problem was it was at a dealer in Arizona. After inquiring about the car, I learned they still had it, so I put down a deposit and started the process. After the deal was done, the dealer put the car on a truck and sent it my way. A few weeks later, I got a call from the trucker asking me where to drop it off. I went to a suburb and waited in a grocery store’s parking lot. Finally the truck arrived, and my new baby was delivered.

All this trouble, just for a car? Yes. Enthusiasts know what they want, and they’re willing to put in the time and effort to get it. If I did this comparison nowadays, the result might be different: all four cars in this comparison have since received several changes since 2010. However, at the time, the Genesis Coupe proved to be the best one for me, and, three years later, I still like my car. This is how an enthusiast bought his ideal performance car. 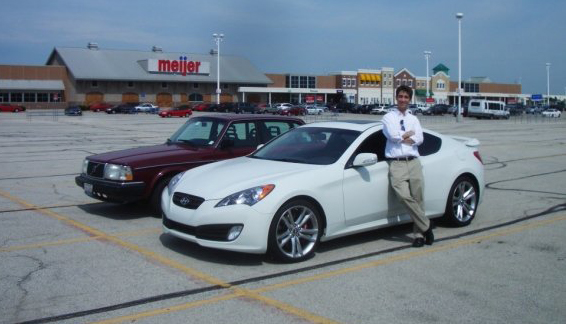 Dave poses with his new Genesis Coupe immediately after delivery in June 2009. His previous car, one of his parents’ Volvo 240s, is in the background.