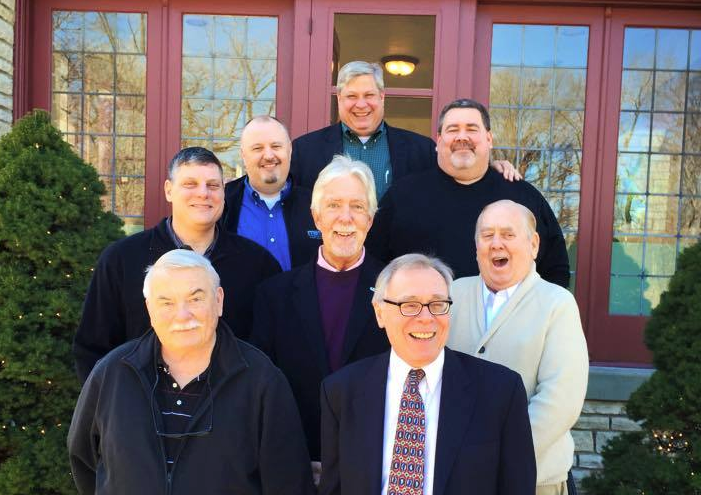 Jim Mateja (lower left), seen here with Tom Appel (upper right) and other past presidents of the Midwest Automotive Media Association. Jim helped found the MAMA organization, and remained an active member throughout his career.

I can’t speak with authority about Jim Mateja’s media reach. Someone once told me that Jim’s column appeared in more than half of the nation’s Sunday-newspaper auto sections—and I doubt that was much of an exaggeration.

Despite his influence, I never once heard Jim say anything that suggested he was more than a work-a-day newspaper guy with a little too much on his plate. If you knew Jim only casually, you probably remember him as a grumbly guy who walked slowly. If you knew Jim well, you know that he was a warm and decent guy, and a credit to our profession.

My car infatuation had fully blossomed by the time I became a tweener. I spent hours each month poring over Car and Driver, Motor Trend, and Road & Track, and sifting through the vast collection of brochures I had amassed from trips to the Chicago Auto Show.

Around that time, my father began saving Jim’s Chicago Tribune columns for me. I wasn’t very interested at first. Newsprint was a tough sell to a twelve year old, and Jim didn’t review very many Porsches or Mercedes-Benzes. But gradually, I began including his work in my regular reading.

The one thing that made Jim’s reviews so different from those in Car and Driver or Motor Trend was that I could never tell if Jim actually enjoyed evaluating cars. It would be years before I realized that this was because Jim was actually an excellent journalist.

At some point, I began writing to Jim at the newspaper. This would have been the mid to late Seventies. I can’t recall what I asked Jim, but he usually wrote me back. I’m pretty sure he never printed any of my letters, but he took real time to respond with thoughtful and friendly notes.

I finally met Jim at the first press event I covered as an auto writer–a Honda press drive in Dearborn, Michigan. A Consumer Guide coworker thought it amusing that I would regard Jim with anything like celebrity status. Said coworker introduced me to Jim as “the kid who kept writing you dumb letters.”

Anxious to talk to Jim, I accepted his invitation to join him outside for a smoke—though I am not a smoker. We chatted for a while, and he never asked me where my cigarette was.

I would be exaggerating if I said Jim and I were close friends, but we talked often, and I became fond of him. Jim called me often, usually seeking random pieces of automotive information that he supposed a Consumer Guide editor might have easy access to.

Jim was a big fan of our monthly Car and Truck Test magazine, and mourned openly and loudly when we ceased publication of it in 2009. After that, Jim began using our website, but wasn’t too happy about it. I know this because he told me so–many, many times.

As a co-founder and the first-ever president of the Midwest Automotive Media Association (MAMA), Jim was a valuable consultant when I became MAMA’s president exactly 20 years later.

Jim wasn’t a car guy in the traditional sense. He had no interest in spending time at the race track, didn’t obsess over horsepower numbers, and rarely commented on a vehicle’s styling, unless he found the car to be ugly—he had plenty to say about ugly cars.

Because he wasn’t a car guy, Jim was comfortable asking automaker representatives simple, direct questions, the answers to which other auto writers might typically assume were obvious. “Will there be a hybrid?,” “When’s the diesel coming?,” “Will there be a coupe?” Usually, the answers to these questions were exactly as everyone at an event expected, though every now and then Jim hit pay dirt and unearthed an unexpected scoop—simply because he bothered to ask.

Jim wrote in plain language and without hyperbole. This may be why my father read his work regularly. Jim was not without a sense of humor, however–he regularly laced his columns with references to cats, which he hated. The cat stuff occasionally led to some pretty entertaining letters to the editor—which Jim dutifully printed.

Jim left the Tribune several years ago, but continued to do freelance work up until the present. Even after his “retirement,” Jim was present at MAMA events more often than not, and he was always happy to complain about the weather.

Jim was a good guy who remembered your wife’s name, the last conversation he had with you, and, why he liked you. He was gruff but charming, and always worth talking to.

It’s too late now to thank Jim for the role he played in steering me toward this strange and wonderful career, but I do feel better having shared the story.