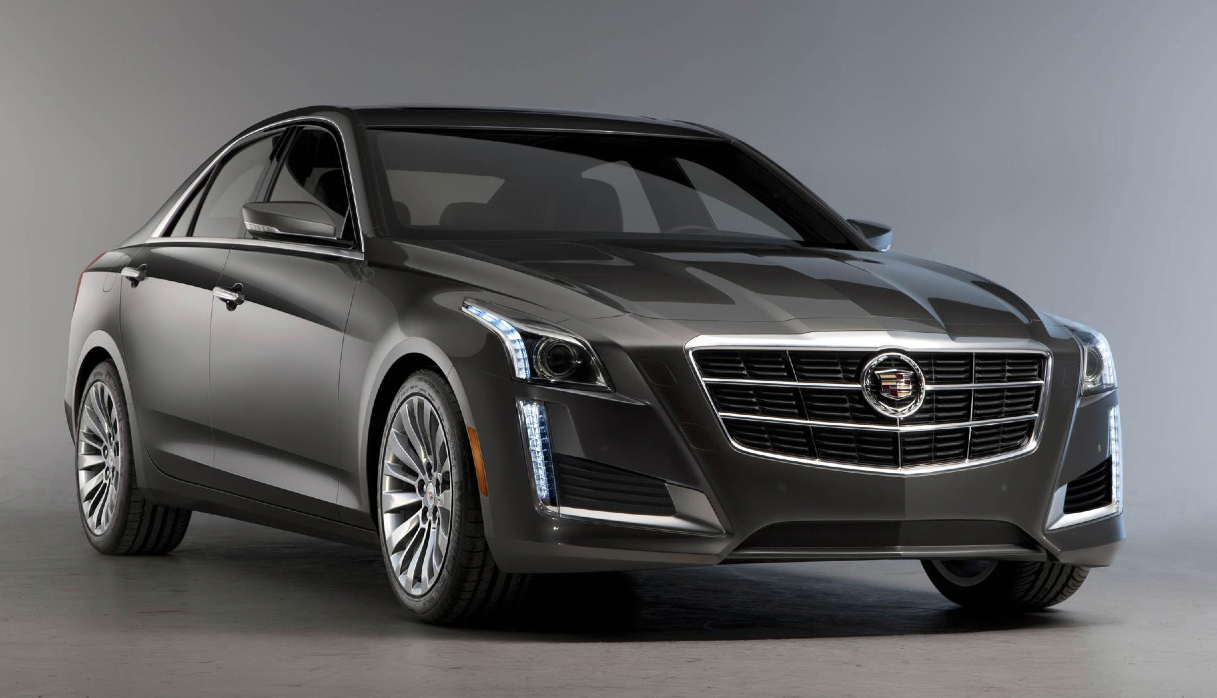 Cadillac has just unveiled the third generation of its midsize CTS, a car that redefined the luxury brand after its introduction in 2003. At that time, Cadillac hung its hat on big, front-drive luxury sedans, but the CTS bowed as a midsize rear-drive sporty sedan aimed directly at rivals from BMW and Mercedes.

While coupe and wagon body styles of the CTS carry over with few changes for 2014, the sedan is all new. Longer, lower, and leaner than its predecessor, the new CTS also introduces a new engine for Cadillac: a twin-turbo, 3.6-liter V6 with a stomping 420 horsepower. Offered on the new high-end Vsport model, it slots between the existing non-turbo 321-hp 3.6 and the mighty 556-hp supercharged V8 of the spirited CTS-V (which also carries over virtually unchanged for 2014). Added as the entry-level engine to replace a 270-hp 3.0-liter V6 is a turbocharged 272-hp 2.0-liter four from the smaller ATS sedan. Returning in midrange models is the non-turbo 3.6 V6.

Because the ATS has been slotted in as Caddy’s entry-level car, the CTS has been moved up in both size and price. Yet despite its larger shadow and longer list of standard equipment, the new CTS checks in at a svelte 3616 lbs. in base form – more than 230 lbs. lighter than before. That’s largely due to the use of lighter-weight materials. For instance, several suspension components, body braces, and even the doors switch from metal to aluminum, and some other pieces switch from aluminum to even lighter-weight magnesium. This weight savings goes a long way toward improving performance and fuel economy, though it also contributes to a higher price.

As such, when the 2014 CTS sedan goes on sale in mid October, buyers will be greeted by a base sticker that has risen by nearly $7000 — from $39,095 to $46,025. While the weight savings will be invisible (except for an increase in the EPA fuel-economy figures on the window sticker), the longer list of standard equipment will be clearly evident. Added for 2014 are such items as run-flat tires, rear-obstacle detection, keyless access and starting, power front-seat lumbar support, LED “signature” front lighting, rear-side airbags (something you actually don’t want to see), three USB ports, an SD-card slot, and Cadillac’s CUE infotainment system, all of which were either optional or not available at all last year.

As mentioned, the base engine is now a 2.0-liter turbocharged four, and while that may sound like a step backward from the former 3.0-liter V6, it’s actually a leap ahead in terms of performance and fuel economy. Cadillac quotes its 0-60-mph time at 6.1 seconds, which is not only a substantial 1.5 seconds quicker than with the former 3.0-liter V6, but also just slightly behind the 5.9 seconds quoted for the “step up” 3.6-liter V6. Furthermore, EPA fuel-economy ratings improve from 18 city/27 highway for the 3.0 to 20/30 for the turbo four. 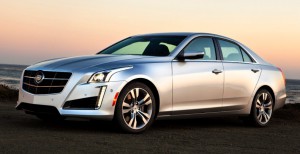 In fact, about the only time the 2-liter four lags behind the midrange 3.6 is in full-throttle takeoffs; the four moves out briskly but more gentlemanly than the tire-screeching V6, but within 20 feet, the two seem to be about neck-and-neck. This may in part be due to the lower 1st gear in the V6’s eight-speed transmission (we didn’t get a chance to drive an AWD V6 with the six-speed), because in virtually every other throttle-stabbing test, the four seemed just about as strong as the V6. The new turbo V6 is another healthy step up, noticed mostly in midrange acceleration. Cadillac says the Vsport will run the 0-60 dash in 4.6 seconds, a time competitive with most V8s in the class. And it certainly feels that quick. All three engines are very quiet and refined until the right-hand pedal is prodded, at which time they emit a rich, pronounced roar. Also, both transmissions kick down quickly for more passing power, and both also include steering-wheel paddle shifters for manual gear selection — which we found to be particularly useful in our mountainous drive route.

Speaking of the drive route, the one Cadillac chose proved to be a bit of an anomaly. Normally — particularly in the area of California where this event took place — the route consists almost entirely of smooth roads, whether they’re twisting through the mountains or arrow-straight highways. Not so at this event. While we didn’t find any Midwest-sized potholes, we did encounter numerous rough patches, which only served to highlight the fine ride/handling balance engineered into these cars.

The CTS is available with 17-, 18-, and 19-inch wheels in various styles. All those with 17s come with a non-adjustable suspension, while those with 18s and 19s come with GM’s Magnetic Ride Control adjustable suspension. All do a good job of absorbing bumps along with providing sharp, quick steering response and sporty handling, but those with Magnetic Ride Control seem to suffer a bit less body movement, whether over bumps or in corners, and also provide a somewhat stouter feel. The driver can dial in Tour, Sport, and Track modes — which adjust the exhaust note in addition to the suspension and steering feel — and while the differences are noticeable, they’re hardly obvious; Sport is perfectly suitable for normal commutes, and even the Track mode didn’t prove brutally harsh. The non-adjustable suspension seems to lean toward the ride-oriented Tour setting, but still provides fine corner-carving capabilities. (Models so equipped still have Tour and Sport settings that adjust exhaust note and steering.) All models have satisfyingly quick steering (those with Magnetic Ride Control being a shade quicker) and sharp turn-in, which really adds to the sporting nature. While we prefer the Magnetic Ride Control system, we don’t think a buyer would go wrong either way. Brakes on all models employ Brembo-brand calipers, which provide strong braking with a confident feel.

So performance-wise, the CTS has it nailed. In terms of accommodations, however, it exhibits some weaknesses. 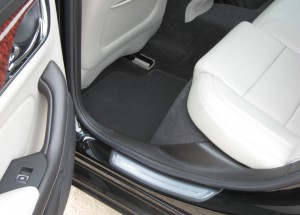 Visible here is the below-seat bulkhead that can complicate entering and leaving the rear seat.

Compared to the 2013 model, the new CTS is 1.2-inches longer in wheelbase and 4.2-inches longer overall, putting it closer in size to its chief rivals, the BMW 5-Series and Mercedes-Benz E-Class. However, neither increase did much for rear-seat or trunk space, both of which remain about the same. While there’s enough head and legroom in back for two adults, a passenger in the middle has to straddle a tall, wide driveline hump. Furthermore, getting your feet out the door opening can be a challenge. Not only is the door sill tall – meaning you have to pick your feet far off the floor to clear it – but there’s a structural bulkhead that extends beyond the seat cushion and is squared off at the corners, restricting the opening for those with larger feet. Some folks might also catch their hip on the rear of the door opening on exit.

Front seaters encounter no such problems, but the driver might find others. Cadillac’s CUE infotainment system has never been one of our favorites, and it’s standard in the new CTS. Those familiar with smartphones will quickly catch on to its theory of operation (almost entirely by touchscreen and touch-sensitive controls, with virtually no conventional buttons or knobs), but that still won’t make it quick to use. Or learn. It’s great from a high-tech, “gee whiz” perspective, but it needlessly complicates most functions, forcing a long look from the road for even simple adjustments.

Cargo space could be larger and better utilized. The trunk is wide at the back end (where golf clubs would go) but narrows considerably between the wheel wells, and the floor has raised edges. Sickle-shaped hinges are a bit low-tech for this price class, but they’re covered to prevent damage to luggage. There are a couple of storage bins to the side and under the floor, but the rear seat backs don’t fold. 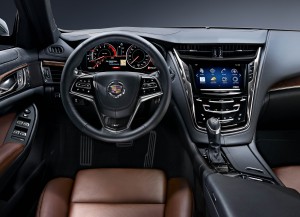 But those are really our only complaints with the new CTS. Interior design and materials are easily up to the standards of this price class. One would be hard-pressed to find any hard plastic, as leather (in numerous color combinations), wood (in several grain choices), carbon fiber, and metallic accents are the order of the day. The instrument panel has gone digital, and though that allows different gauge layouts and info screens to be called up on the panel, traditionalists may bemoan the switch from mechanical analog gauges to “virtual” ones. Classy touches abound (such as footwell lighting), and interior storage is quite good, with a decent-size glovebox, small console box, two console cupholders (with powered sliding cover!), a small console bin, and a neat hidden bin behind the fold-up CUE screen.

In terms of dynamics, performance, luxury, and feature availability, the CTS is now a strong competitor to more established upper-line models in the premium-midsize segment. The question is whether buyers will acknowledge that it’s now a direct 5-Series and E-Class rival and thus accept its rather substantial price jump. Only time will tell, but Cadillac is betting rather heavily that they will.

To read about the Cadillac XTS Vsport, click here.