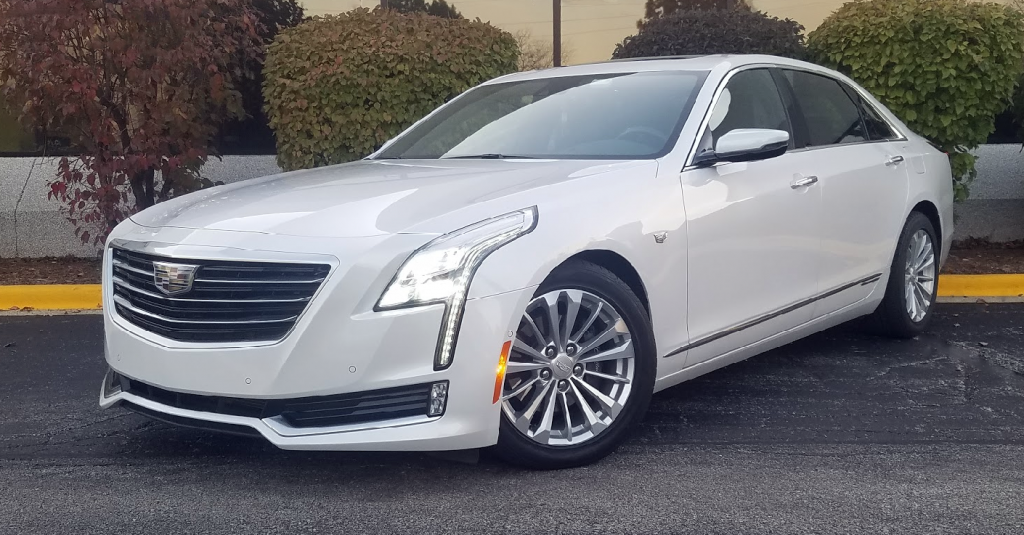 The great: Smooth acceleration with hybrid efficiency and pure-electric-driving capability

Bless their hearts for trying, some of the luxury-nameplate premium-large sedans are taking a shot at going “green” with hybrid models. For 2017, that tiny group added a new member, the Cadillac CT6 Plug-In, which, it’s impossible to ignore, is a plug-in hybrid that can run for a stretch on full electric power.

The Plug-In is priced near the top of the CT6 roster. At $75,095 to start, it is exceeded only by gas-V6 models at the upper-crust Platinum trim level. However, that’s still considerably cheaper than the hybrids in the BMW 7-Series ($89,100) and Mercedes-Benz S-Class ($96,600), both of which are plug-ins. (Lexus will return a conventional hybrid to the LS line for 2018 after taking ’17 off.) 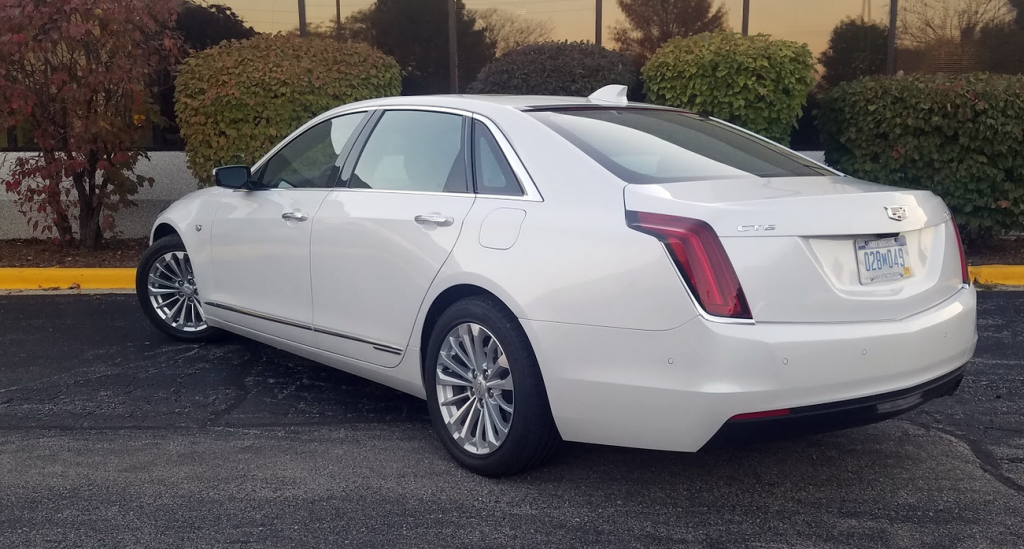 CT6 Plug-Ins come standard with 18-inch “ultra-bright” wheels. There is little in the way of badging to announce the hybrid status–discreet Plug-In Hybrid badges are mounted just below the trim strip on the rear doors.

Consumer Guide®’s test car was just visiting Illinois, by the way. The Plug-In is only sold in Arizona, California, Florida, Georgia, Nevada, Oregon, and Texas—and even then through a select group of dealers in those states. The lone option on CG’s example was Crystal White Tricoat paint, a $500 add-on that, with the delivery charge, brought the final tab to $76,590. Note that the CT6 Plug-In is eligible for federal tax credits of up to $7500.

The CT6’s cabin has a sporty, luxurious look and feel. The configurable virtual gauge cluster and CUE touchscreen system worked well, though not all of our testers liked the unusually shaped shifter or the console touchpad control.

The thing that fundamentally sets the hybrid apart from any other CT6 is, of course, its powerteam: a 2.0-liter turbocharged four-cylinder gas engine paired with twin electric motors, and driven through a transmission that’s a cross between stepped gears and continuously variable ratios. (Cadillac calls it an “electric variable transmission.”) Total system output comes to 335 horsepower—as much as the naturally aspirated 3.6-liter V6 available in other CT6s makes—and 432 lb-ft of torque. The trans has “Tour,” “Sport,” and “Hold” drive modes that exert control over how and when electric and/or gas power is used. The Plug-In is one of the few CT6 models with rear-wheel drive.

EPA fuel-economy ratings are 62 MPGe for mixed gas/electric use, and 26 mpg in combined city and highway driving with gas-only operation. Under ideal temperature conditions, a full charge of the lithium-ion battery that takes approximately 4.5 hours on a 240-volt level-2 charger to complete provides 31 miles of fully electric operation.

The CT6 Plug-In is powered by a turbocharged 2.0-liter 4-cylinder paired with twin electric motors for a total system output of 335 hp and 432 lb-ft of torque. It delivers acceleration on par with the base 3.6-liter V6 in other CT6s.

Whether running on electricity or gas, the CT6 Plug-In generates sufficient power for ready getaway from standing starts, and it cruises at highway speed without protest. If it seemed a little reluctant anywhere, in this tester’s experience, it was in more midrange acceleration from the gas engine. A determined press of the accelerator with the car already moving at surface-street pace was followed by steady, gradual acceleration, not rapid pickup.

With daytime temperatures in the 40s, full charging time on CG’s level-2 charger edged closer to five hours, as indicated by a message on the car’s instrument panel. This reviewer was able to drive the car on two consecutive days with a full charge. In the prevailing temperatures and with heat on and some highway-speed driving, charges lasted from about 23 to 25 miles before switching almost imperceptibly to gas-engine operation. That helped stretch his fuel mileage after 205 miles to 31.1 mpg. Sixty-five percent of that stint was in city-type driving. Unfortunately, there was no opportunity to find out how long a charge through a level-1 household hookup would take because the standard-equipment 120-volt charging cord was missing from the test car. 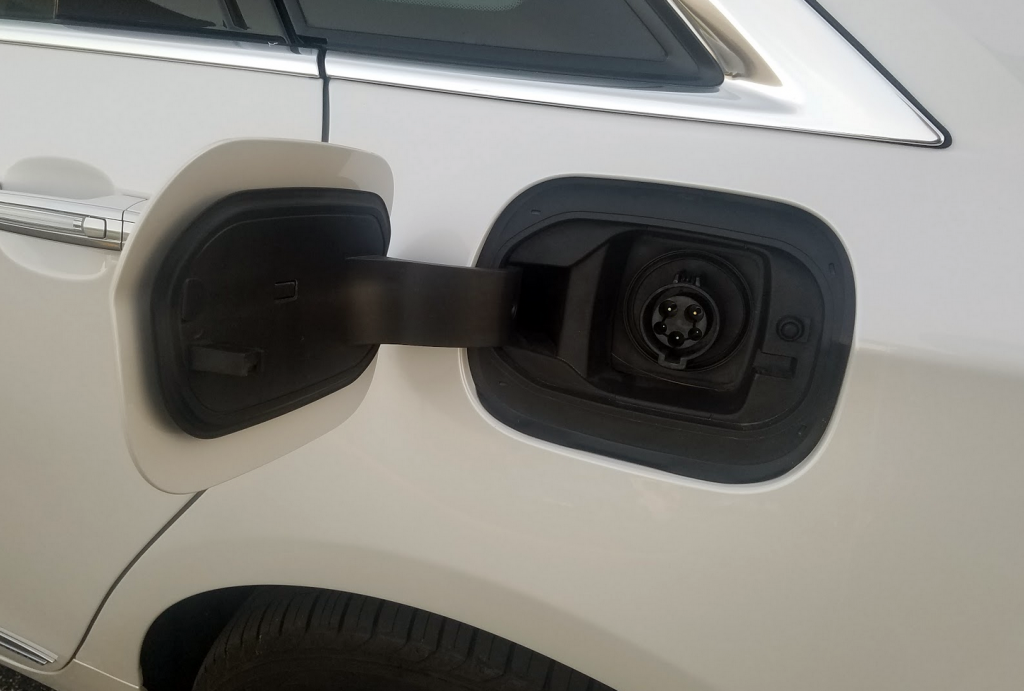 Charge on the left, fuel on the right: The CT6 Plug-In’s charge port is located aft of the driver-side rear door; the fuel filler is on the passenger side.

Of course, the hybrid role doesn’t end when all-electric drive does. Regenerative braking returns some energy to the battery to be expended on electric-aided starts. Small paddles on the back of the steering wheel control a Regen on Demand feature that allows the driver to adjust the level of deceleration provided through regenerative braking.

A light, aluminum-intensive structure helps make a CT6 of any stripe a nimble and pleasing handler for a big car. While not quite to the level of costlier imported segment rivals, ride with the Plug-In’s standard 18-inch alloy wheels is still comfortable and fairly resistant to the majority of road shocks.

Trunk space takes a hit from the need to make room for car’s electric infrastructure. Also sacrificed is a trunk pass-through found on gas-engine CT6s. Storage bins under the floor hold the 120-volt charger and the tire-inflator kit.

In general CT6 fashion, the quiet cabin imparts a luxury look and feel, though perhaps not to the degree of its BMW and M-B competitors. There’s good legroom in either row—indeed, the two outboard spots in the rear are very good in this respect—but headroom suffers a little under the sunroof. Drivers enjoy fairly uncluttered vision most anywhere they need to look.

Input of radio presets on the CUE infotainment system’s 10.2-inch central touchscreen is intuitive and direct, and can also be carried out via a cursor-type touchpad on the console that correlates to selections on the touchscreen, though it does demand some attention from the driver to use it. Virtual dials in the instrument display are bright, and include a charge and power dial to the left of the central speedometer. Climate controls mix touch-sensitive “buttons” for function selection with repetitive-motion toggle switches for temperature and fan-speed selection.

The glove box is big, but the console box—with a lid that opens from either side—is shallow and holds a USB port. Modest pockets inhabit each door. The console has two covered cup holders. A pull-down center armrest offers rear passengers shallow covered storage space and two pop-out cup holders.

Truth be told, the primary market for the CT6 Plug-In is in China, where greater use of electrified cars is actively promoted by government policies. In fact, the Plug-Ins sold in the U.S. are assembled in China. Demand for the car in the States may be limited, but so is the risk involved in offering it at all.

Any CT6 offers sleek, stately proportions; the Plug-In model offers the efficiency of a hybrid powertrain that can be driven up to 30 miles or so on pure electric power.