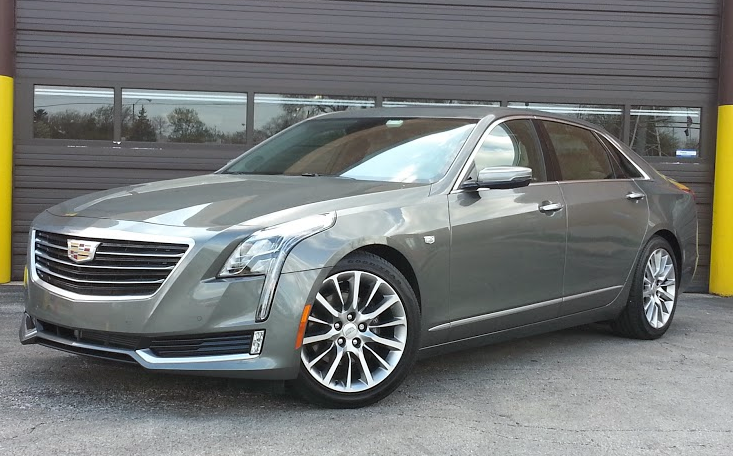 The not so good: Oddly shaped, small-for-the-class trunk

In terms of room, available features, and price, Cadillac’s brand-new CT6 comes out of the gate as a solid contender in the premium large-car class. This is a tough crowd to keep up with, too, considering “the Joneses” here include the BMW 7-Series, Jaguar XJ, Lexus LS, and Mercedes-Benz S-Class. 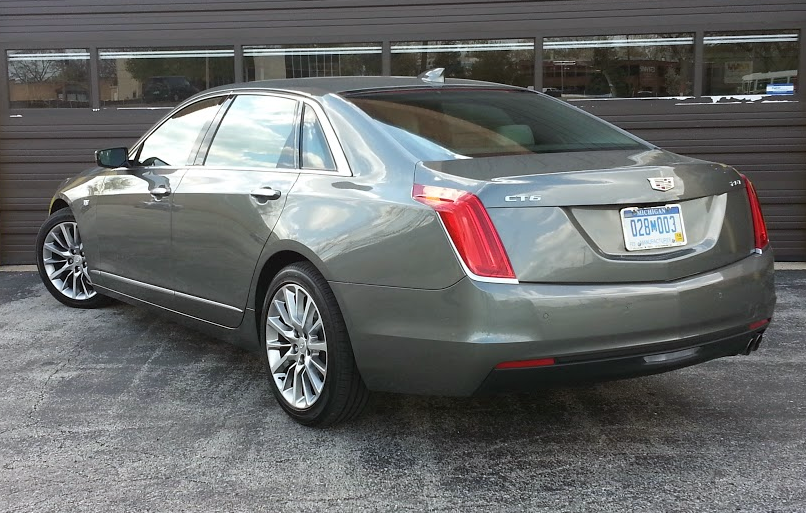 This Sedan de Ville reimagined for the twenty-first century starts for $53,395 with rear-wheel drive and a turbocharged 2.0-liter four-cylinder engine—though Consumer Guide®’s CT6 test car with this same powertrain but one-step-higher Luxury trim had a base price of $58,395. There are all-wheel variants, two more engine choices (a 335-horsepower 3.6-liter V6 and a twin-turbocharged 3.0-liter V6 with 404 horsepower), and two more trim grades above the Luxury level. At the top is the all-wheel-drive 3.0-liter Platinum model, which lists at $88,460 without delivery or options. That’s in the ballpark with the slightly cheaper—but less powerful—BMW 740i (rear-drive only), Jaguar XJL Portfolio AWD, and Lexus LS 460 L AWD, while being a good 10 grand less than an “entry-level” 449-horse V8 Mercedes-Benz S550 AWD. 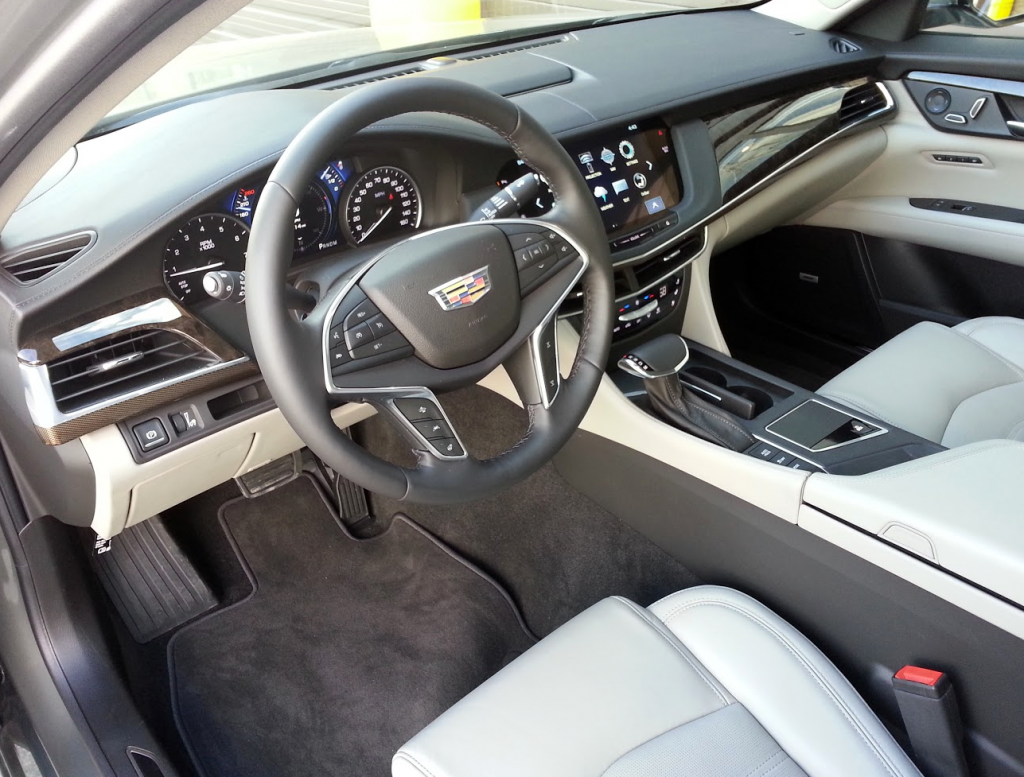 The CT6’s cabin is as rich and finely crafted as a shopper in this class would expect.

The Luxury trim is the only one available with all three engine/drive combinations. Its $4900 boost over the basic equipment package buys a lot of comfort and safety items, and even a brake upgrade. An abbreviated list of comfort and convenience gear added to the Luxury model includes 16-way adjustable front seats, passenger-seat memory settings, heated front seats and steering wheel, power-folding exterior mirrors, an embedded navigation system, premium 10-speaker surround-sound audio, a hands-free power trunklid, and automatic parking assist. Safety equipment that kicks in at this level counts a surround-vision camera (it displays a 360-degree view around the vehicle), blind-zone alert, rear cross-traffic alert, forward-collision alert, front pedestrian detection, lane-keeping assist (with lane-departure warning), and low-speed collision-mitigation automatic braking. All of this is on top of general standards like a 4G LTE Wi-Fi hotspot, leather upholstery, dual-zone automatic climate control, an eight-inch color programmable virtual gauge cluster, Bluetooth connectivity, satellite and HD radio, and a rear-vision camera.

Cadillac employs an aluminum-intensive structure to keep the CT6’s curb weight in the vicinity of 3700 pounds, which makes it lighter than some of its rivals’ midsize models, let alone their big ones. The Caddy is every inch a full-size sedan, though. Compared to the Jaguar XJL that CG editors recently tested, the CT6 is .4 of an inch taller and .8 of an inch narrower. With a wheelbase of 122.4 inches and an overall length of 204 inches, it fits neatly between the dimensions of the XJ and longer XJL. The CT6 and XJL are a close match in head- and legroom front and rear (right down to not-so-hospitable middle rear seats), but there are better driver sightlines in the CT6.

The cabin is pleasingly quiet. Materials are quite nice, too, and true to the vehicle class. Bright-metal highlights and wood accents dress up the interior, and there is an abundance of  soft-touch surfaces throughout. Cadillac’s CUE infotainment system, which displays on a big 10.2-inch central touchscreen, has gotten user-friendlier. Input of radio presets is intuitive and direct—and, counting voice control, there are four ways to change stations! Another one is a cursor-type touchpad on the console that correlates to selections on the touchscreen. This is veering into “dangerous” central-controller territory here, but the one in the CT6 isn’t as “jumpy” as Lexus’ similar device, and it is useful for keeping fingerprints off the screen. Driving instruments in the virtual display are bright, and easy to read and use with the aid of thumb buttons on the steering wheel. Climate controls use touch-sensitive “buttons” for function selection. Slightly distracting repetitive-motion toggle switches govern temperature and fan speed. Control buttons for the optional rear seat heaters are located on the doors. 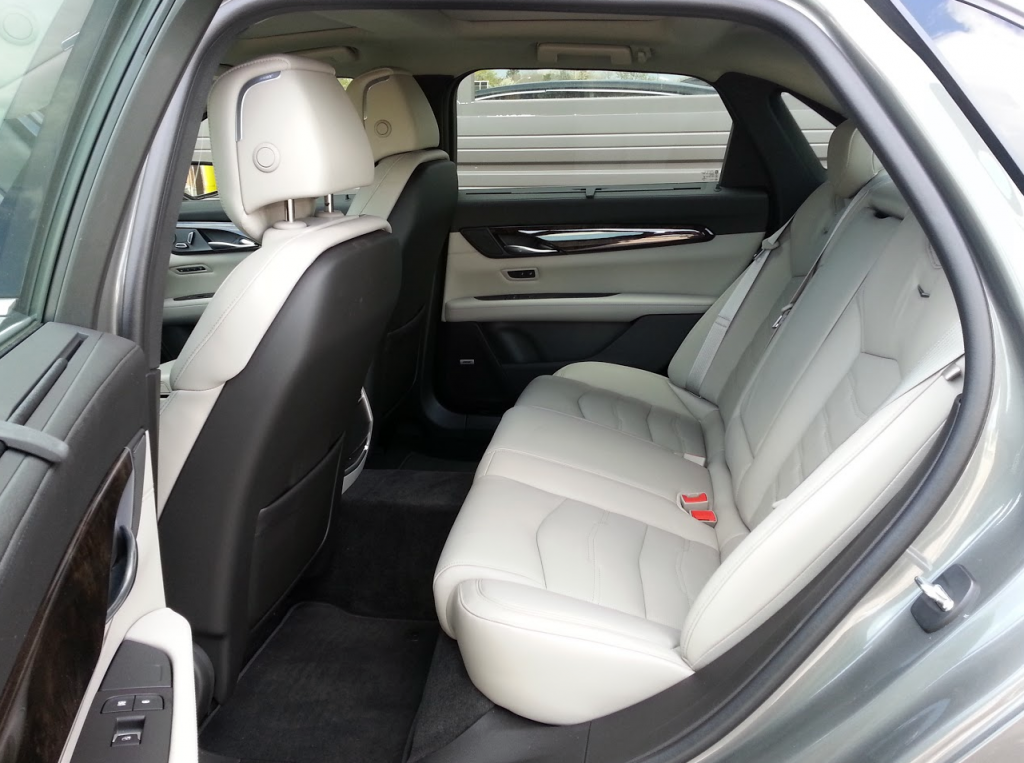 Adults will find sufficient stretch-out space in the CT6’s back seat.

If anything inside can be found lacking, it might be interior storage space. The glove box is big, but the console box is shallow and holds a USB port. Pockets—this driver has seen bigger ones in smaller cars—are found in all four doors. Twin covered cupholders reside in the console. A pull-down center armrest in the rear has shallow covered storage and two pop-out cup holders.

Trunk space is good. The cargo area extends far forward. Wide at the back, it does narrow between wheelhouses. A net pouch strung up off to the right side is available to hold small incidentals. Trunk hinges are covered. The rear seat doesn’t fold, but there is a pass-through for long items.

While every entry in the premium large-car class tries to get what fuel economy it can while providing luxury-car power, the CT6 makes a determined effort to court buyers for whom conserving fuel is a purchase factor. Among the gas-only cars in the group (there is one diesel and several hybrids), the CT6 is the only one with a four-cylinder engine. It is rated by the EPA at 22 mpg in city driving and 31 on the highway; this driver averaged 22.4 mpg from a 163-mile trip—70 percent of which came under city driving conditions. A relatively subtle engine stop/start (that can be switched off) is employed in an effort to wring out additional fuel savings.

The 265-horsepower turbo four paired with an eight-speed automatic transmission smoothly delivers safe and responsive power. However, for something closer to exciting, a step up to one of the V6s will be in order. The trans has “Tour,” “Snow/Ice,” and “Sport” drive modes available at the tap of a button on the console to modify driving behavior. Ride from the base suspension (albeit with extra-cost 19-inch wheels) is comfortable and resistant to most road shocks. Note that the 2.0-liter four comes only with rear-wheel drive, while V6 cars are solely AWD vehicles. 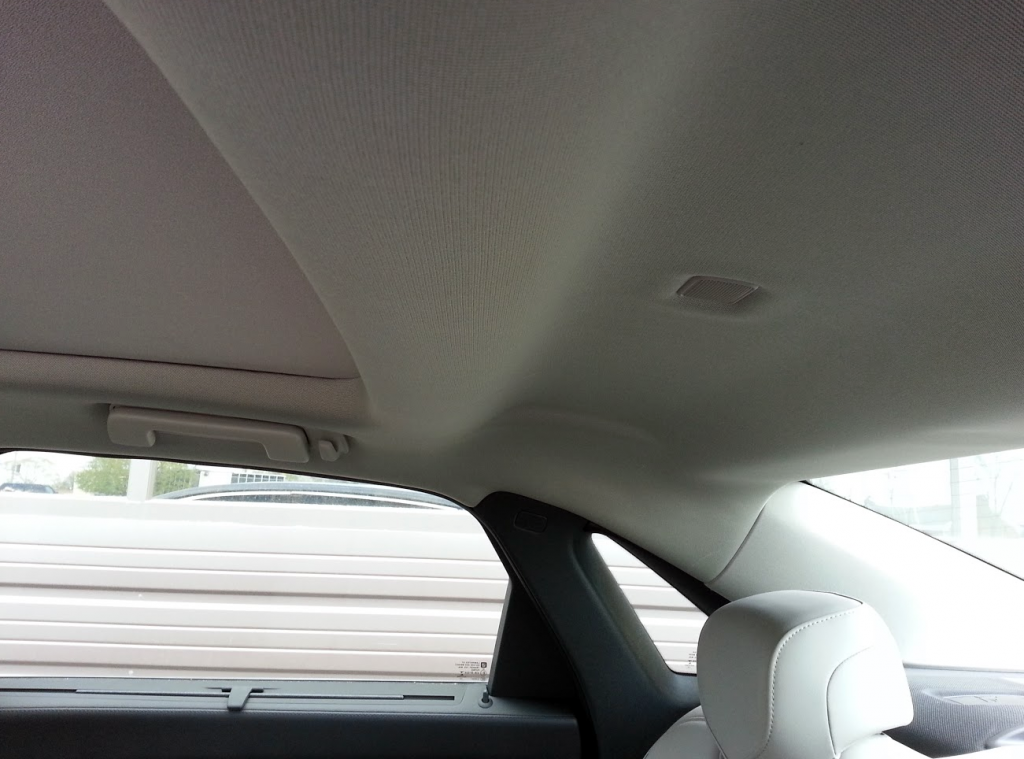 There’s more that can be done to a CT6 Luxury to make it really live up to its name. CG’s test car tacked on $6920 in options, including a 34-speaker Bose Panaray sound system (one big three-sided speaker rises from the top of the dash); a package with twin sunroofs, ventilated front seats, heated rear seats, and a rearview mirror with camera view; 19-inch alloy wheels; and deluxe paint. The result was a final delivered price of $66,310. Even then the CT6 is still quite competitive in its class, and an eminently worthwhile consideration for luxury-car shoppers.

Cadillac’s new CT6 flagship is one the year’s nicest surprises. And like many surprises, the CT6 doesn’t immediately impress–instead, it sneaks up on you slowly, revealing its charms in a slow, measured fashion.

Unlike its midsize CTS sibling, the CT6 cabin doesn’t feel aggressively luxurious. Instead, the décor is subtler, though everything looks and feels top notch.

Most impressive is the CT6’s ride and handling balance. While not as firmly composed at speed as a Mercedes-Benz S-Class or as precise-handling as a BMW 7-Series, the CT6 finds its own formula, feeling both buttoned down and very refined. Think of the CT6 as a slightly more athletic Lexus LS 460, and you get the idea.

Likewise, the base 2.0-liter engine is arguably the most-refined small turbo serving duty in a luxury vehicle. Throttle response is excellent, and the accompanying engine note is as welcome as that of any premium-car V6. 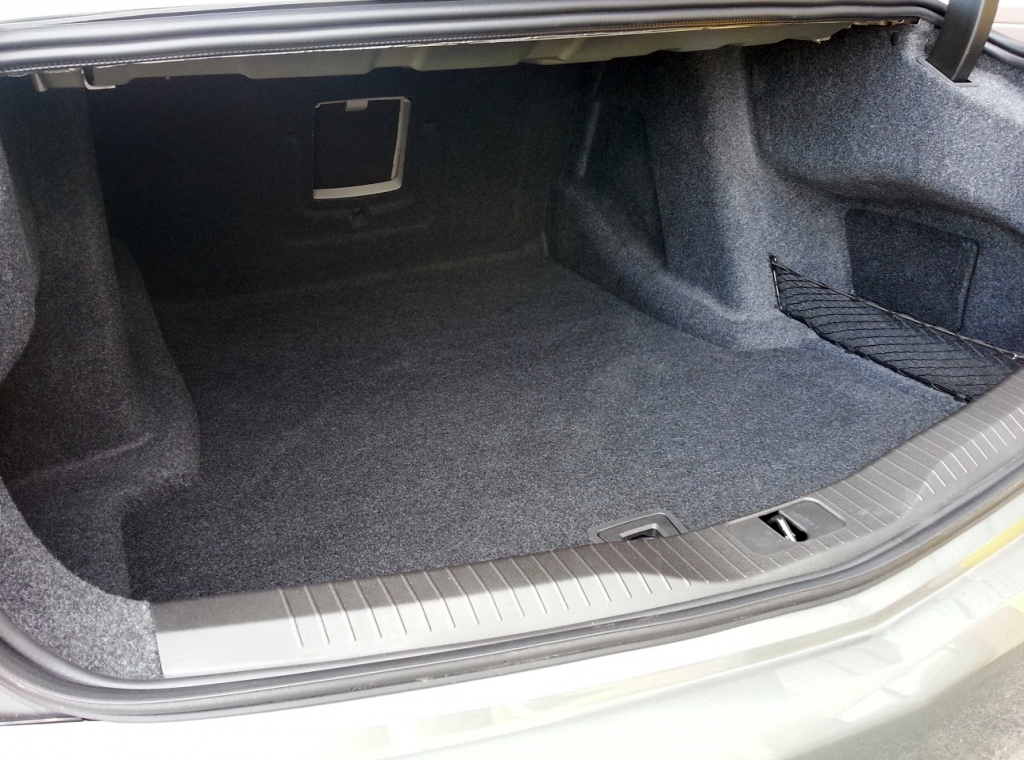 The CT6’s trunk opening is sufficiently large, as is the trunk itself, but the space narrows dramatically toward the trunk’s rear wall.

My sole complaint is a periodic crude-feeling downshift observed several times during my time in the CT6 while decelerating to a stop from a slow cruise. Though hardly harsh, the wonky gear change marred what was otherwise flawless transmission behavior. Note that I am only editor to have observed this phenomenon.

While our test car came in at just over $66,000, it’s worth noting that the CT6 can be had for under $60,000 if you forgo a few options, such as the excellent (but pricy) Bose Panaray sound system.

Less forcefully styled and more conservatively trimmed than other Cadillacs, the CT6 feels like the product of a brand becoming more comfortable in its own skin. The competition in this segment is staggeringly good, but the CT6 is by no means the lesser ride–it’s just the least known. If you’re looking for something at the low-end of large luxury, the CT6 absolutely deserves test-drive consideration.

Moonstone Metallic paint is a $495 option on the CT6.