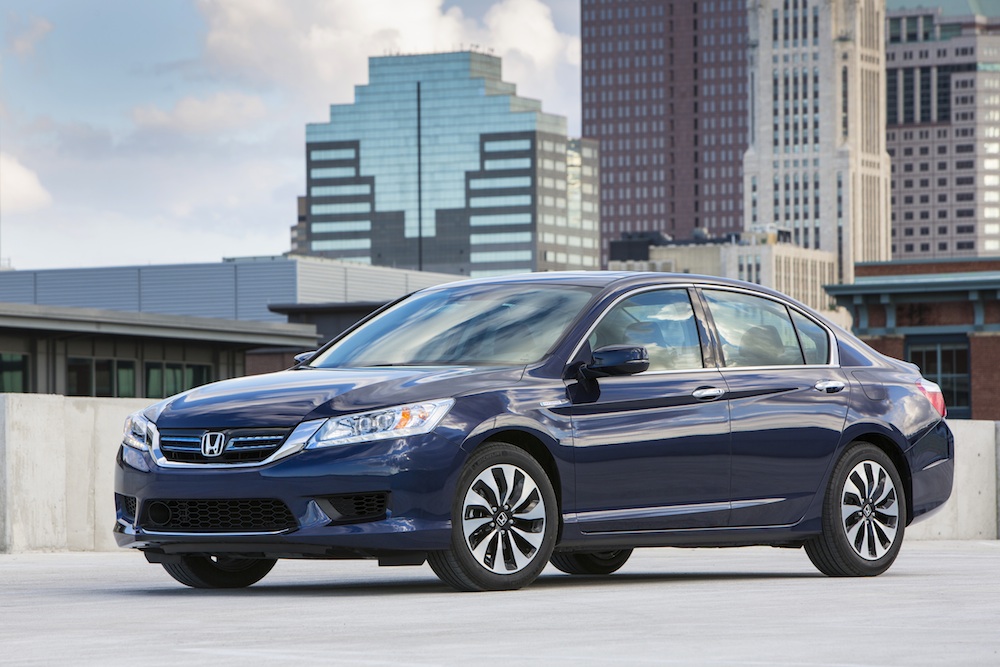 Since its American introduction for 1976, the Accord has been a big part of Honda’s phenomenal growth as an automaker. And for the last several years, it has not only been Honda’s best-selling model, but one of the best-selling cars in the U.S.

But one area in which it has lagged in recent years is in offering a fuel-saving hybrid version. Most of the other top players in the hotly contested midsize-sedan market have one: Toyota Camry, Ford Fusion, Hyundai Sonata, and Kia Optima. (The Chevrolet Malibu and Nissan Altima offered one until 2014 and 2013, respectively.) But that failing has now been rectified. 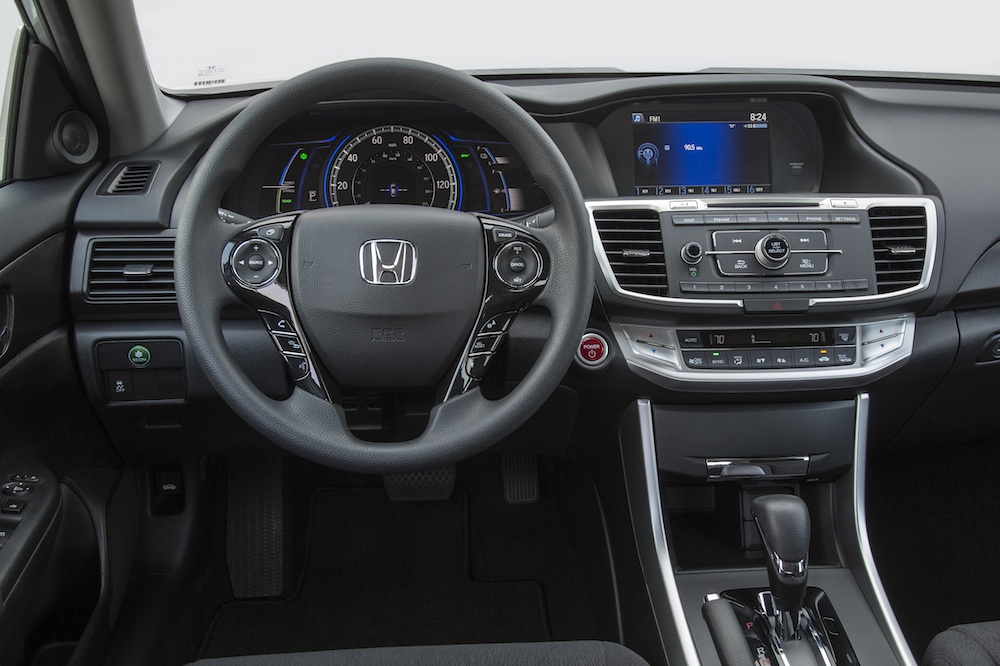 The Hybrid shares the dashboard of the regular Accord, but adds some hybrid-powertrain graphics to the instrument panel and central dash screen.

One advantage to being a Johnny-come-lately to a market is that the competition has already tested the waters – and, to a degree, the technology – and also set your targets. Among its direct competitors, the fuel-economy crown had been worn by the Ford Fusion Hybrid with a 47 city/47 highway EPA rating. (Note that the Toyota Prius tops that, but it’s a hatchback and really more of a compact in terms of dimensions.) But Honda is now in the hunt, and the former king has fallen.

How did Honda do it? Well, the Accord Hybrid uses a somewhat different powertrain strategy than most other hybrids.

Whereas most other hybrids use the gas engine as the principal power source with a small electric motor providing assist under certain conditions, the Accord Hybrid uses a powerful electric drive motor as the main source of propulsion for the front wheels. In fact, at lower speeds, it’s the only source of propulsion, as the 2.0-liter four-cylinder gas engine is only used to spin a generator that helps keep the relatively small 1.3 kilowatt-hour lithium-ion battery pack charged. At highway speeds, however, the electric motor and gas engine switch roles; the gas engine powers the front wheels (which is more efficient), and the electric motor only kicks to assist in acceleration. This works well because electric motors produce their full power as soon as they start to turn (such as when accelerating the car away from a stop) and are most efficient at low speeds, whereas gas engines produce their maximum power at higher engine speeds and are most efficient when run at a constant speed. The total hybrid system horsepower rating is 196, which is 11 horsepower more than the base 2.4-liter gas engine, and helps to offset the roughly 350-lb weight gain of the hybrid drivetrain.

From the driver seat, the Accord Hybrid feels (and to some degree, sounds) much like a normal gasoline-powered car fitted with a CVT automatic transmission. Acceleration is very smooth and linear, with no surges as when a traditional automatic shifts gears. However, in most cases, the engine starts up soon after the car gets underway, and it tends to spin at a moderate and fairly constant speed (what’s most efficient) while turning the generator. While the engine is relatively quiet and quite refined, it can be heard as a constant whir in the background. This may sound a bit odd to anyone used to the audible rise and fall of a gas engine as a traditional automatic runs through the gears under acceleration, but it will be familiar to anyone used to a CVT automatic. 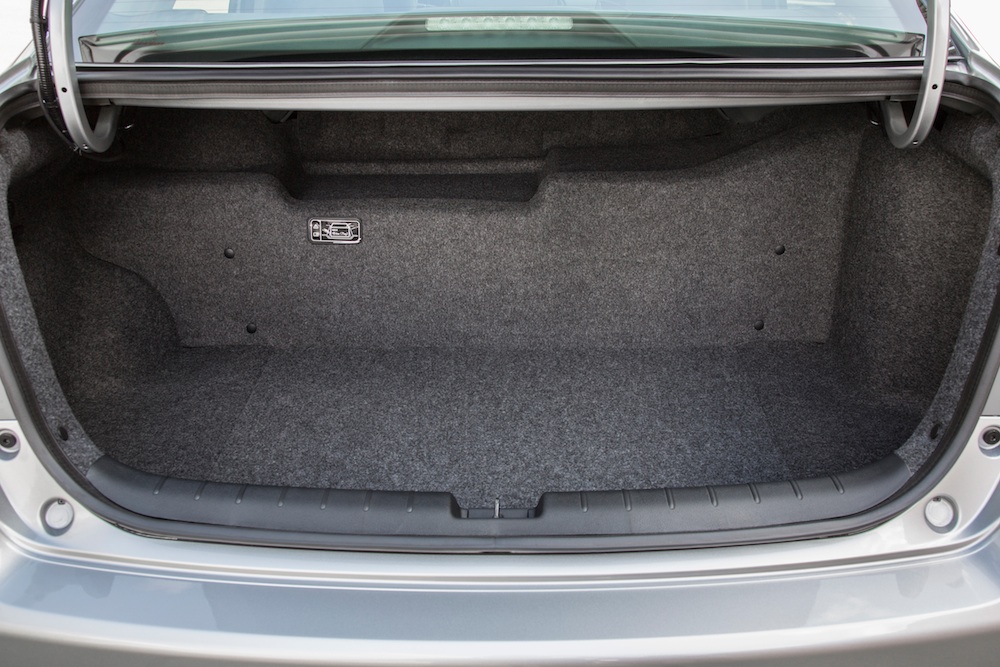 The hybrid battery lies against the back wall of the trunk. It reduces cargo volume by about 20 percent and deletes the folding rear seat back.

One advantage to electric–powered cars is that the electric motor drives the wheels directly through what’s essentially a one-speed transmission. Thus throttle inputs result in almost instant acceleration, mostly because there’s no wait for the transmission to downshift. Since it’s an electric motor that powers the Accord Hybrid at lower speeds, this advantage applies, at least for the most part. Some stabs of the throttle once underway don’t result in instant action or a lot of power, but response is almost always quicker than with a traditional automatic. Likewise at higher speeds when the gas engine is powering the wheels; not only does the gas engine speed up, but the electric motor chimes in to help.

As might be expected, there are some downsides to the hybrid equation. One is cargo space and versatility. Because the battery for the hybrid system resides against the back wall of the trunk, cargo volume is less than in the gas Accord; 12.7 cubic feet vs. 15.8. It also deletes the folding rear seat back, so cargo space can’t be expanded.

The other is cost. The Hybrid is offered in three trim levels: Base, EX-L, and Touring. These roughly equate to the EX, EX-L, and Touring gas models in terms of equipment. The base Hybrid starts at $29,155, which is about $3500 more than the gas-powered four-cylinder EX. A similar price gap applies to the $31,905 Hybrid EX-L. The Hybrid Touring goes for $34,905, but the gas version of the Touring comes standard with a V6 engine. Since “regular” Accords with the four-cylinder engine are EPA rated at 27/36 with an annual fuel cost of $1650 (EPA fuel-cost estimates are based on 15,000 miles per year with gas at $3.70 per gallon) and the Hybrid has an annual fuel cost of $1050, this would indicate the Hybrid saves about $600 per year in fuel cost. That means it would take a little less than six years to pay back the difference. 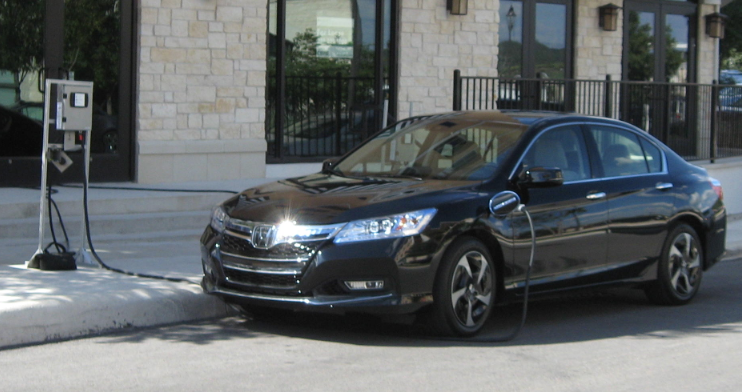 A plug-in version of the Accord Hybrid is offered that uses a larger battery pack providing up to about 10 miles of electric-only range. After that, the gas engine kicks in, and the car behaves much like the regular Accord Hybrid. However, the Plug-In Hybrid is only offered in California and New York, and is priced (it comes fully loaded) at about $40,000. One is shown here plugged into a charging station.

But to some of those who want to “go green,” the monetary argument isn’t nearly as persuasive as the fuel-economy one. And being able to say your car is rated at 50 mpg will likely bring you some admiring nods around the water cooler.

To read our review of the 2014 Honda Accord Touring, click here.

Click here to read why Tom loves the Honda Accord Sport.