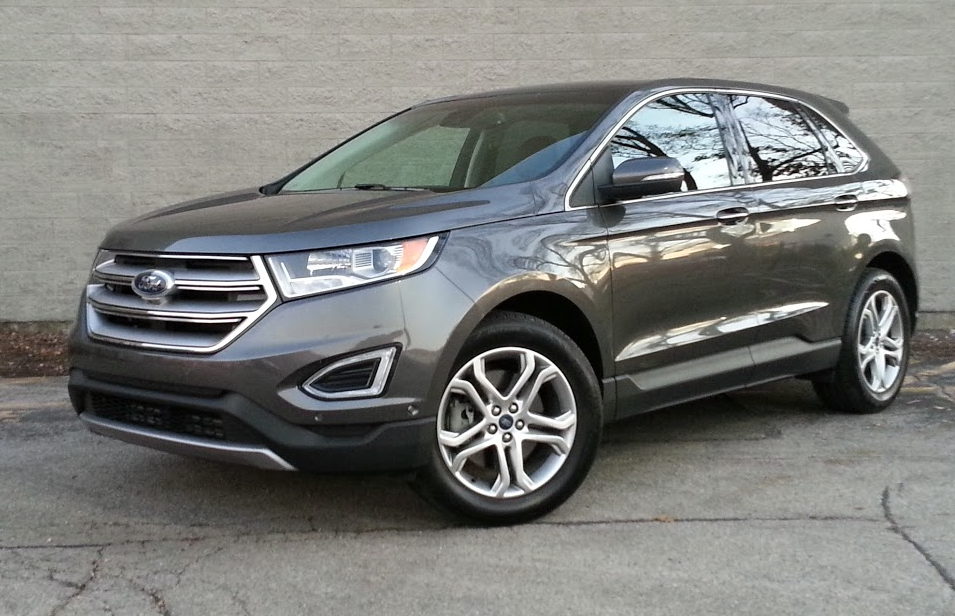 The great: Roomy, loaded with safety and convenience technology

The not so good: Prices climb quickly as options are added

There’s no problem living with the Ford Edge that’s been redesigned for 2015. The midsize crossover SUV is comfortable, quiet, roomy, and brimming with modern features. What may be a little challenging is affording one—at least if it’s a higher-end Titanium model with all-wheel drive like the one Consumer Guide® editors sampled. 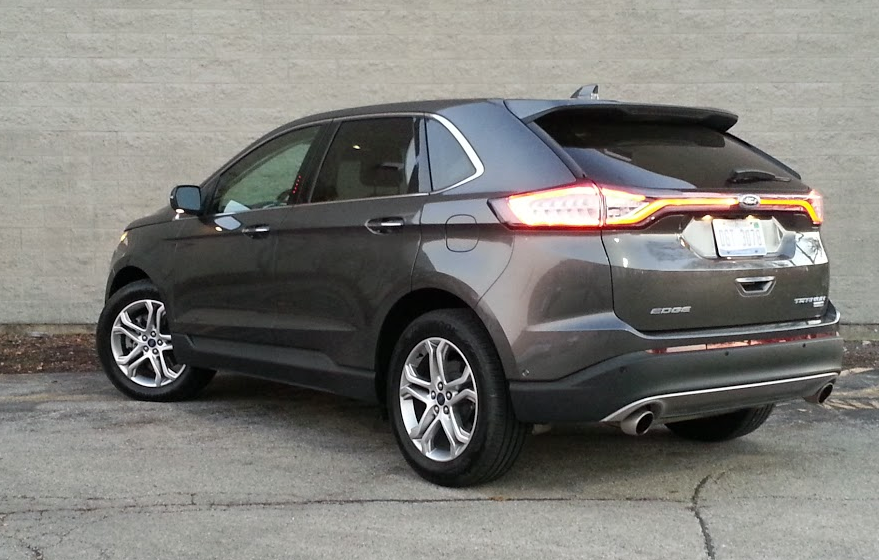 While the Edge shopper can nab one with AWD for just a bit more than $30,000 in basic SE trim (the all-wheel drivetrain costs $1995 more than the front-wheel-drive setup), two steps up the ladder sits the Titanium with a starting price of $37,595. The one that CG editors drove sported an optional equipment group with many of the convenience and safety upgrades that have been added for ’15, but that $5645 package and the delivery fee pushed the bottom-line price of the test truck to a considerable $43,190. Note that the Titanium isn’t on the, ahem, cutting edge either—there’s a Sport level with starting prices $2500 higher than those of its closest neighbor.

Aside from new styling and a pair of new turbocharged EcoBoost engines, the updated Edge also boasts a bevy of added features like available cooled front seats, heated rear seats, heated steering wheel, lane-keep assist, inflatable rear safety belts, enhanced active park assist (which assists in parallel and perpendicular parking), a 180-degree front camera, and hands-free liftgate. Of them, however, only the liftgate—it will open or close with a wave of the key-bearer’s foot under the rear bumper—comes standard on the Titanium, which is a new trim level for 2015. The rest were found on CG’s test vehicle but only because they were in the extensive option package that also included voice-activated navigation, remote starting, a panoramic sunroof, and more.

The built-in luxury of the Edge Titanium comes from touches like bright exterior accents at the beltline and on the door handles, illuminated door sill plates, ambient interior lighting, and perforated-leather seats with 10-way power adjustment for both front positions. The one driven in this test wore brown seat hides (Ford calls this color “Cognac”) that contrasted nicely with the black dash, door panels, and carpet. Soft-touch material covers much of the instrument panel and doors, and there are enough bright-trim highlights to ward off blandness. 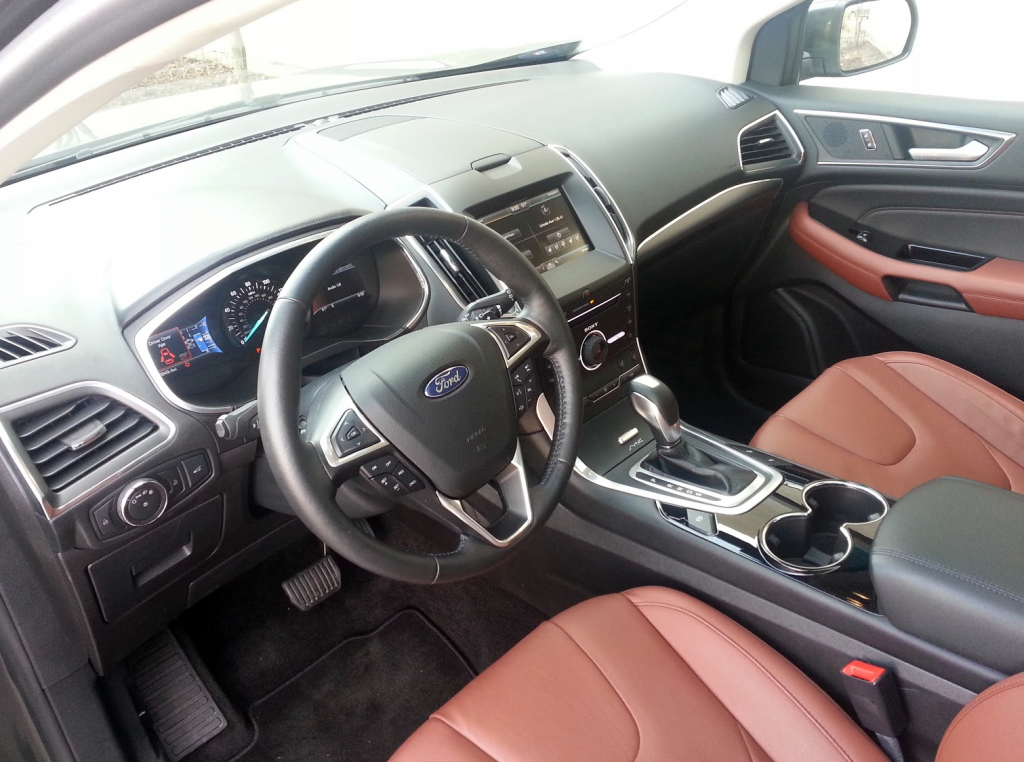 There’s enough room for five passengers to fully appreciate those comforts, too. Head and leg room are plentiful in front, even under the sunroof. Back-seaters will find good toe room ahead of them that maximizes rear leg room. Thanks to a very low driveline tunnel, three adults can occupy the 60/40-split rear bench seat should the need arise.

Drivers are confronted by a single gauge face, a round speedometer. Small windows on either side of this dial display a great variety of information that can be cycled through via thumb buttons on the leather-wrapped steering wheel. (In case a driver feels the need for a tachometer he’ll find it—eventually—in the left window.) Audio and climate controls are decidedly more bothersome to use. Selection and setting of radio stations and other audio functions is done solely on the touchscreen that, to this driver, seemed to require pretty precise contact on the virtual buttons (some of them not so big) to work right. Dual-zone climate controls are a mix of actual off-screen repetitive-push buttons and on-screen contact points for things like fan mode or steering-wheel heat activation.

Interior storage is abundant. The glove box is fairly generous, and the console box under the center arm rest is extremely deep but includes a handy hinged tray to keep items that you don’t want to have to fish around for close at hand. A covered bin at the front of the console holds digital-device plug-ins—including a pair of USB ports. There’s a shallow flip-top bin on the dash above the touchscreen, and a small pull-out drawer to the left of the steering column. Pairs of open cup holders are found in the console and the rear-seat pull-down arm rest, and bottle holders are included in the storage pockets molded into all four doors. Rear-seaters have storage pouches attached to the backs of the front seats.

Cargo loads at bumper height through a somewhat narrow hatch opening. There’s good hidden storage space in two removable underfloor bins. Rear seats fold flat—and easily with the power-retractor switches built into the left side of the cargo bay. With the seats down there’s a lot of available room for loads. 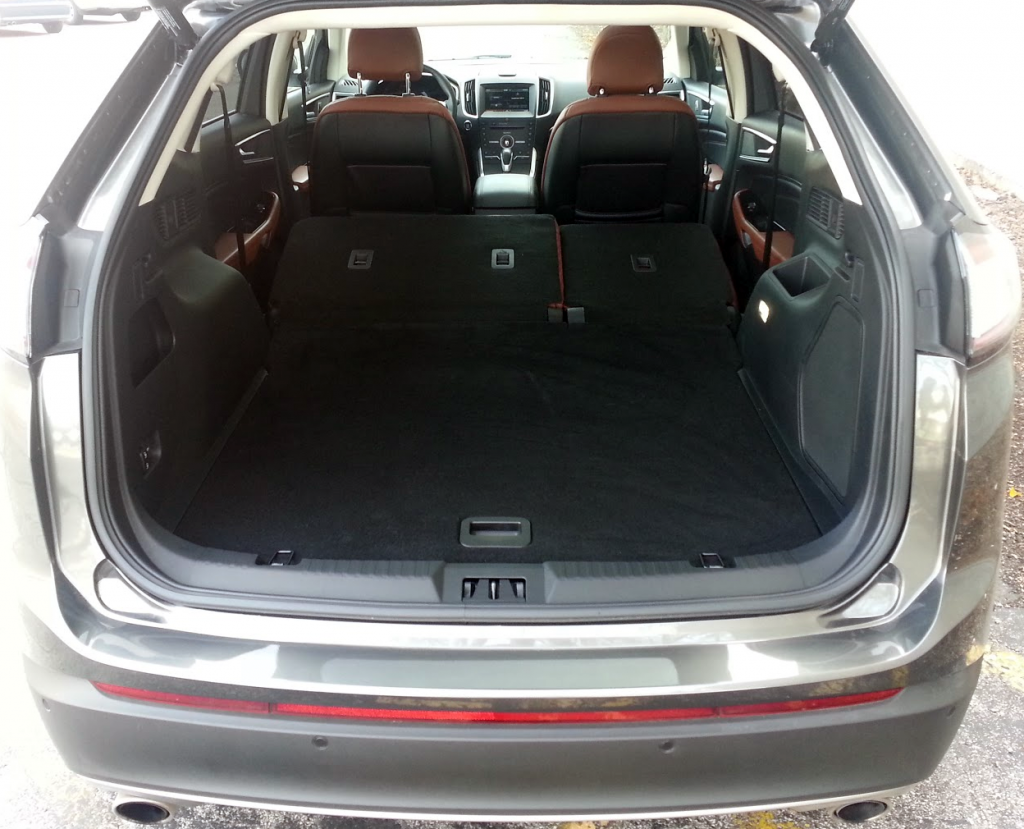 There’s plenty of cargo space, but the hatch opening is a little narrow.

On the road, the Edge with the new base 2.0-liter 245-horsepower turbocharged 4-cylinder engine is pretty lively. Kickdown from the 6-speed automatic transmission is prompt for fine highway performance when a quick getaway is called for. The only blot on performance that this driver could detect was laggard throttle response when ramping up from slow creep speeds to something a bit faster, as is often experienced in stop-and-go rush-hour traffic. After 170.3 miles in the test vehicle, 66 percent of it in city conditions, this tester saw 19.0 mpg from the Edge, unfortunately a little shy of its EPA city rating of 20 mpg. Highway mileage for the 2.0 with AWD is pegged at 28 mpg.

Ride in the test truck was nicely composed and quick to recover from road bumps, and handling was easy. The level of interior quiet was good too. All in all, the redesigned Edge is a more competitive crossover than the vehicle it replaces. 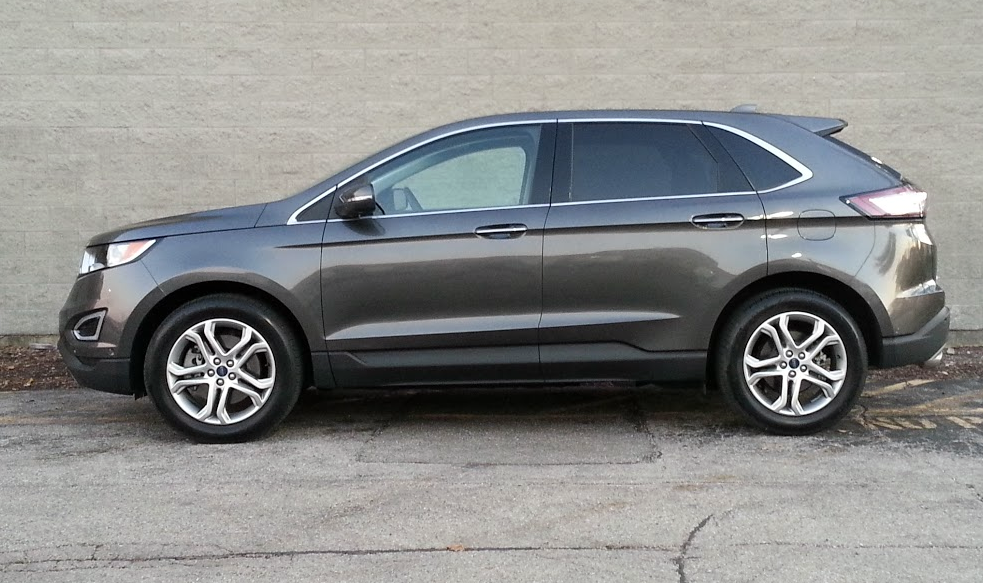