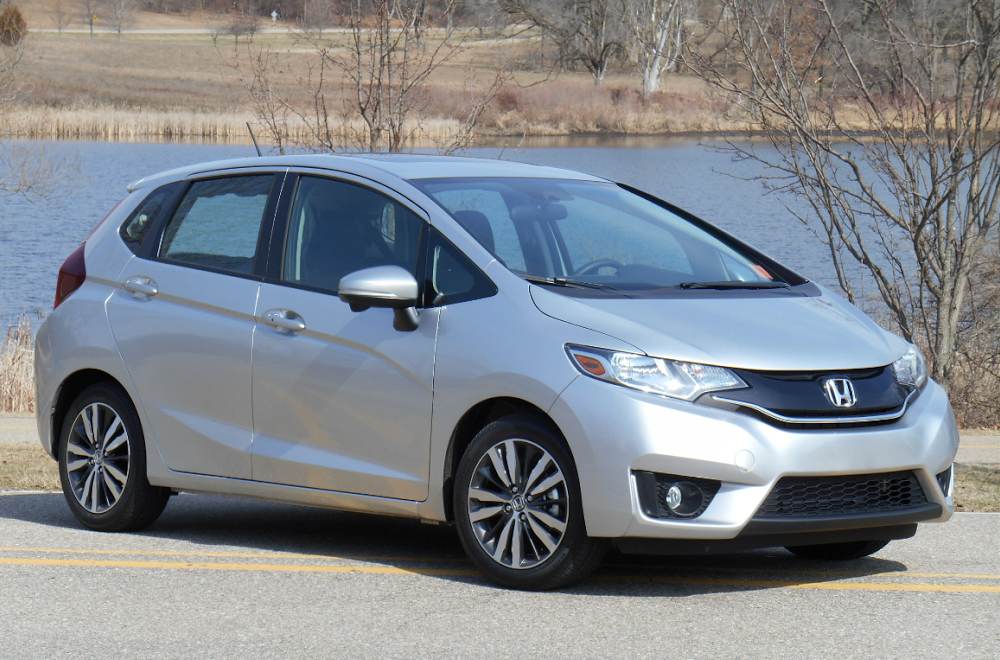 The redesigned 2015 Honda Fit starts at $16,315 including the destination charge. Add $800 for the CVT automatic transmission.

Let me start out by saying I’ve long been a fan of Honda’s versatile Fit. Introduced in this country for 2007 and redesigned for ’09, the latter version spent most of its years on Consumer Guide’s Best Buy list. Only recently did it fall off, replaced by newer competitors that overshadowed it from a feature, refinement, and fuel-economy standpoint.

But none of those rivals ever came close to the Fit for cargo room and versatility. One look inside this tiny box made it clear that someone forgot to tell the Fit it was a subcompact. Not only was there a huge, cubic cargo area in back that rivaled the capacity of many compact SUVs, but the rear seat could be folded flat for larger objects and folded up to slide taller ones in sideways through the wide-opening rear doors. There were also a myriad of storage cubbies inside for small stuff. 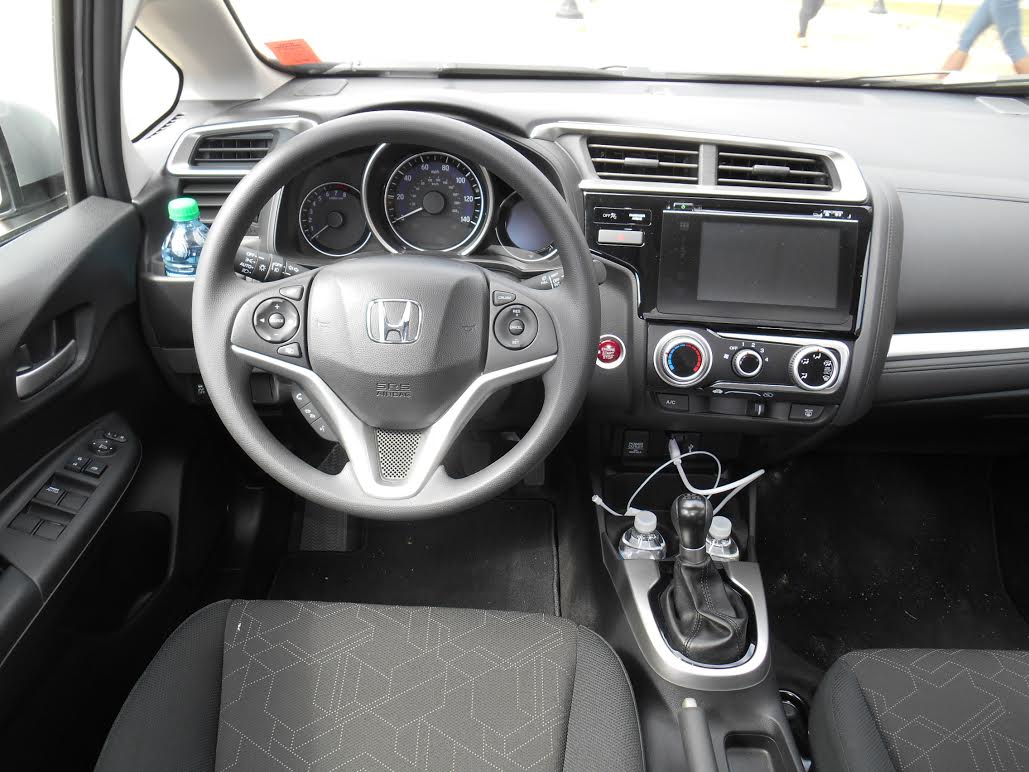 So, when Consumer Guide was invited to the press preview for the redesigned 2015 model, which goes on sale in mid April, I had great expectations. And most of those were fulfilled.

It was obvious that Honda was aware of some of the Fit’s shortfalls – mainly, those mentioned above that had it eclipsed by newer designs. And all have been addressed, if not entirely answered.

Although 2009 – when Fit was last redesigned – is recent history to some of us, it’s a virtual eon in terms of feature availability. Current subcompact rivals offer niceties like leather upholstery, heated front seats, a sunroof, satellite radio, and keyless access and starting, along with safety features such as a rearview camera, rear-obstacle detection, forward collision warning, and lane-departure warning. The previous Fit offered none of that. Furthermore, commonly expected items like Bluetooth wireless cell-phone link – which is often standard now – were only offered on the top-line Fit that started at more than $20,000 with destination.

That situation has been markedly improved for 2015, though not entirely remedied.

While the 2013 Fit (there was no 2014 model) came in base, Sport, and Sport with navigation trim levels, the 2015 adheres to traditional Honda naming practice with LX, EX, EX-L, and EX-L with navigation models. Also keeping with tradition is that there are no factory options, though there are some dealer-installed ones. The base price is up by about $100, now starting at $16,315 including destination for an LX with manual transmission; add $800 for the CVT automatic transmission (more on this later). Honda expects the EX to be the volume model, which with CVT and destination will list for just over $19,000. At the top end, an EX-L with navigation (which comes standard with the CVT) stickers for $21,590. These may seem like decidedly un-subcompact-like prices, but they’re for cars that are very well equipped for the money. 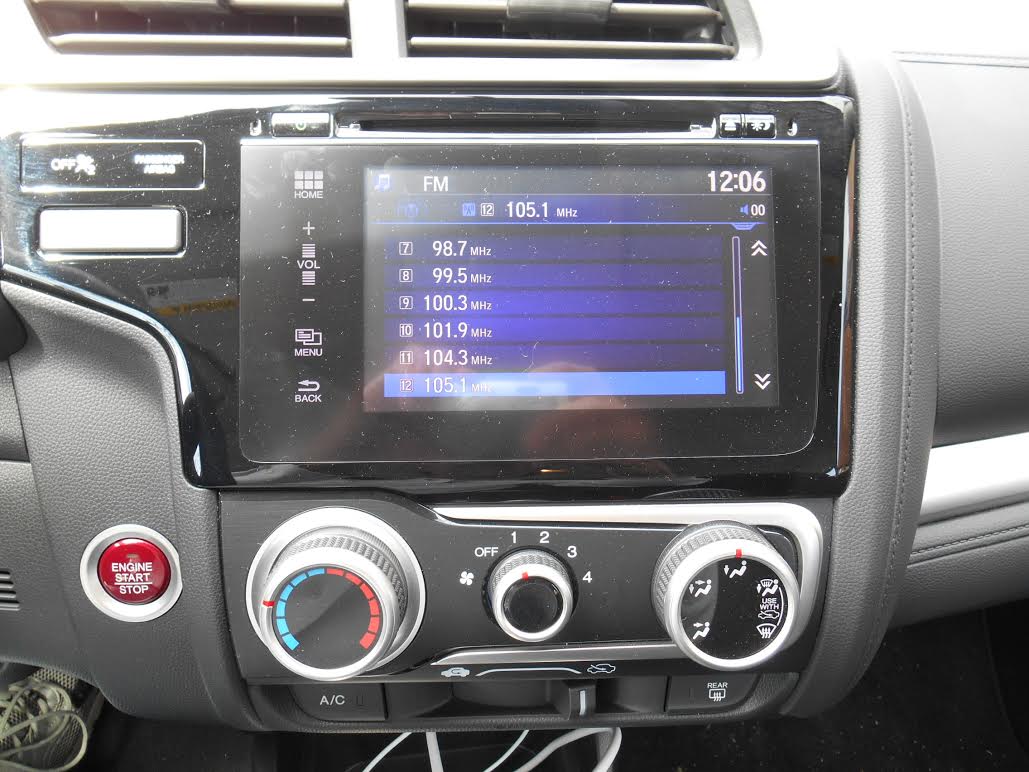 A 5-inch screen is standard on base Fits, while a 7-inch unit comes on higher-line models.

Newly standard on the 2015 Fit LX are automatic on/off headlights, a center console, height-adjustable driver seat, and Bluetooth wireless cell-phone link. Also new is a 5-inch dashboard screen, along with a rearview camera that provides regular, wide-angle, and top-down viewing, the last being particularly useful during parallel parking. Furthermore, the different views can be selected with the simple press of a displayed screen icon. (Higher-level models include a 7-inch screen that adds dynamic guidelines, which “bend” as you turn the steering wheel so you know where you’re going to go.) Other standards include air conditioning, power windows and locks, cruise control, tilt/telescopic steering wheel, and folding rear seat backs.

Newly available features added to the EX include a power sunroof, keyless access and starting, the aforementioned 7-inch touchscreen, and Pandora and SMS text-message functionality. Also new is HondaLink, which allows for some cloud-based apps such as Aha, and Honda’s Lanewatch, which adds a side-view camera on the right that turns on when the right turn-signal is activated – a unique-to-the-class safety feature.

New for the EX-L are leather upholstery, heated front seats, and heated mirrors. The version with navigation adds navigation and satellite radio.

The new audio system (which also incorporates navigation in the top-line model) contains no knobs and only one button: a staple-sized horizontal Power on/off. Everything else is controlled through the touchscreen. While this probably looks modern and futuristic, it really plays havoc with simplicity. Many of what should be simple adjustments take multiple steps or added time to execute, and that takes the driver’s eyes off the road. By contrast, the climate controls remain three easy-to-use rotary knobs, all within easy reach.

Visibility is generally good, though the inverted Y-shaped front pillars block some view at certain angles. A nice touch is that the rear-seat headrests lower to overlap the seat back, thereby clearing the view to the rear. And as mentioned previously, the new-for-’15 rearview camera is another great backing aid. The only “downer” is that the sun visors – when flipped to the side – don’t extend to fully cover the side windows. 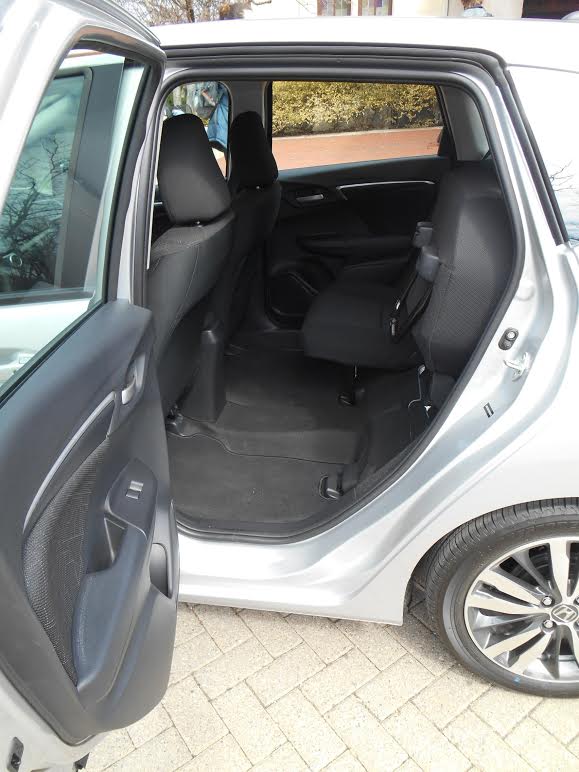 Fit’s second-row seats fold out of the way to create a large and useful pass-through storage area perfect for a bicycle.

Earlier Fits boasted refinement that only a mother could love. This hit you as soon as you sat down to face a dashboard that was a study in bland, hard plastic. Underway, noise levels that were Noticeably high at around-town speeds became a virtual cacophony at freeway speeds, and the engine complained loudly – and coarsely – when pressed. Which was necessarily quite often.

On this score, the new Fit is better – at least, in some ways. Interiors boast some dash padding (I personally wish it had been extended to the door tops, where my elbow often rests) along with nicer trim that includes silver accents. Overall noise levels are lower, but the engine still makes a coarse groan when worked – which is sometimes more noticeable than before.

Blame the new CVT automatic transmission for that last one. Replacing a conventional 5-speed automatic, the CVT is relatively transparent when just keeping up with traffic. But when stronger acceleration is called for, it lets engine revs hang in a rather raucous zone for an extended period of time. (A 6-speed manual – replacing a 5-speed – is also offered on LX and EX models, and it’s a smooth shifter, though few buyers will likely choose it.)

But it’s the CVT that helps with the Fit’s third shortfall: fuel economy. The previous 5-speed automatic brought an EPA estimate of 28 city/35 highway, which is below average for the subcompact class. (Those figures are supported by the 31.8 mpg we averaged in an extended-use Fit with automatic over our 14,000-mile test.) However, the CVT in the base 2015 LX gets a 33/41 EPA rating, among the best in the class. Oddly, other models with the CVT are rated a bit lower, at 32/38, and those with the manual transmission are rated lower than that, at 29/37. Nonetheless, these are all good numbers for a subcompact, so strike “fuel economy” off the demerits list.

Another element adding to the improved EPA figures is a revised 1.5-liter engine with direct injection, which also adds muscle: now 130 horsepower vs. 117. We found acceleration to be perfectly adequate, and the CVT “kicked down” quickly for more passing power when the throttle was prodded at speed.

Fit’s previous base and Sport models had different suspension tuning, the Sport’s being firmer for better handling. But the new Fit has only one setting, and based on our experience over the very rough roads of our Michigan drive route, it appears to lean toward the “sport” side. While smaller bumps were absorbed quite well – though with a fair amount of bump noise – larger ones can jolt a bit. On the positive side, steering response is quick and body lean is kept in check, the combination providing an extremely agile feel.

Size-wise, the new Fit is 1.6 inches shorter than before but rides a wheelbase that’s 1.2 inches longer. The latter, along with some structural changes, provides more than four inches of additional rear-seat legroom. As such, occupant space is even better than before, with plenty of room for four full-size adults. Cargo space is also improved, and the Fit’s class-leading cargo versatility (which includes wide-opening rear doors and some under-floor storage in back) has been maintained. Or at least, most of it. 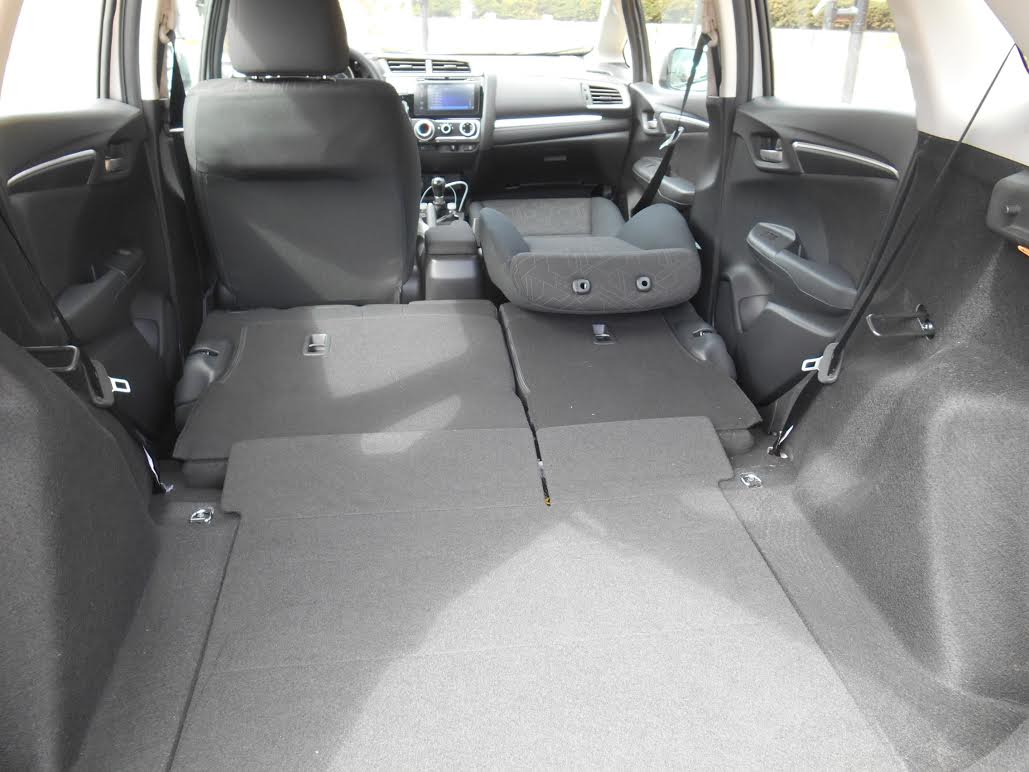 In the cabin, the new Fit adds a center console for more small-item storage (Honda says it’s big enough to fit most tablets), and it includes USB and 12-volt plugs. But we bemoan the loss of the former upper glovebox (there’s now just a decent-sized lower one that’s more awkward to reach) and the passenger-side upper cupholder that sat right in front of the side vent. (This allowed warm liquids to be kept warm by the heated air coming out in the winter, with the opposite for cold liquids in the summer.) But the Fit still has a left-side cupholder/bin in front of the dash vent, along with two tiny console trays, two console cupholders, a large forward console bin (upper models get USB and 12-volt plugs here, too), and small map pockets with cupholders in the doors. So overall, Fit remains impressive in this regard.

In fact, Fit remains impressive in virtually all regards. Nothing else comes close from a cargo-hauling standpoint, and it’s no longer lagging in any crucial areas. And yes, I walked away from the event remaining a really big fan of the Fit. 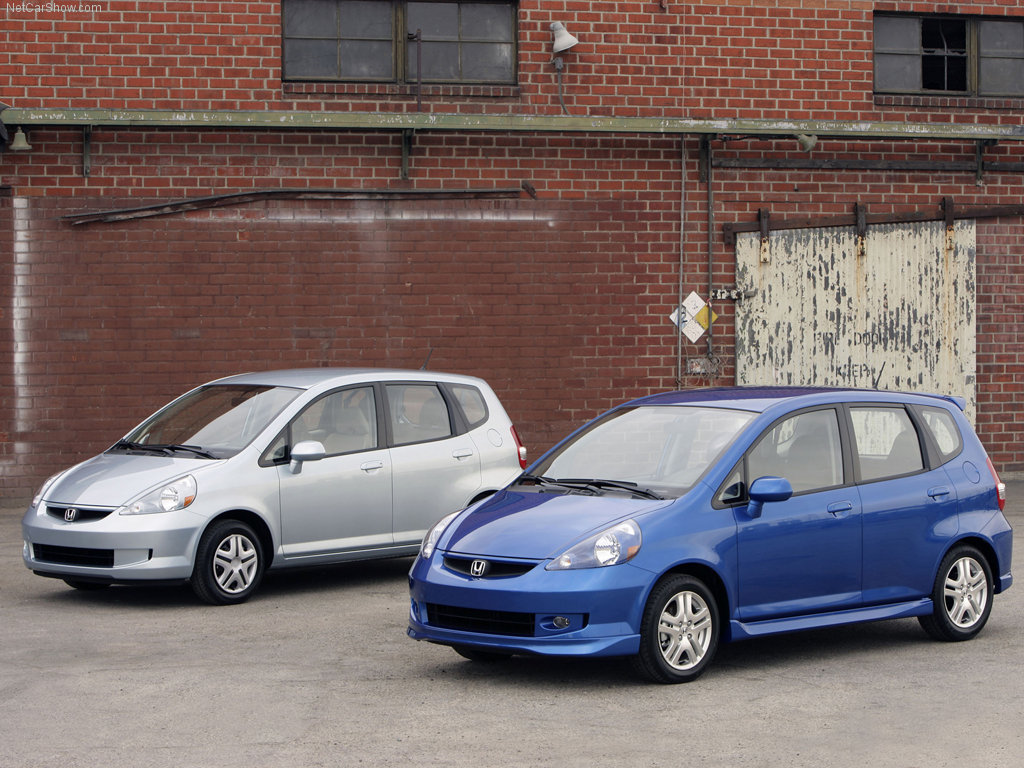 Fit first landed on U.S. shores for the 2007 model year. An ’07 Sport model is seen in the foreground.