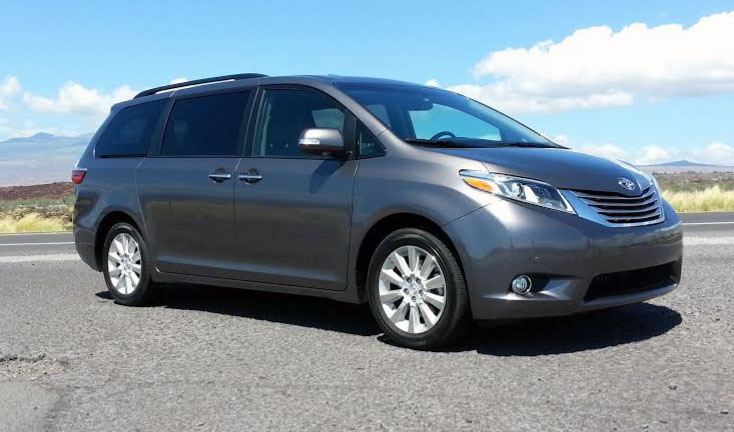 Topping the Toyota Sienna lineup is the all-wheel-drive Limited model.

You can deride them as boring “mom-mobiles” all you want, but the simple fact is this: There is no passenger vehicle better than a minivan at efficiently hauling around lots of people and stuff. And, today’s minivans offer a dizzying array of comfort and convenience features that can pamper (and pacify) most any family member.

A perfect case in point is the Toyota Sienna, which sees a raft of improvements and new features for 2015. The current generation of Toyota’s Sienna minivan debuted as a 2011 model, so it was about due for the typical mid-cycle freshening that most vehicle designs receive two or three years into their life cycles. And Toyota did an extra-thorough job with this update; save for the 266-horsepower 3.5-liter V6 powertrain and the exterior sheetmetal, most of the Sienna’s components are significantly re-done. 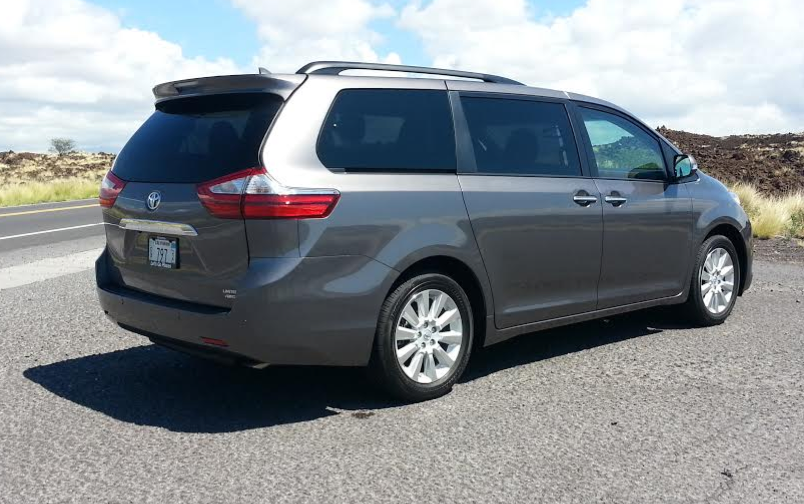 Sienna’s exterior styling changes only in detail for 2015… such as the new taillights on this Limited model.

The basic body structure has been strengthened via 142 additional spot welds–Toyota says the newly fortified chassis enabled them to more finely tune the Sienna’s springs and shocks for better ride quality and handling. New safety features include integrated blind-spot mirrors, a standard back-up camera on all models, a passenger seat cushion airbag (Sienna now has a class-leading 8 airbags in all), and an additional LATCH anchor in the third-row seat (for a total of four—two in the second row and two in the third). 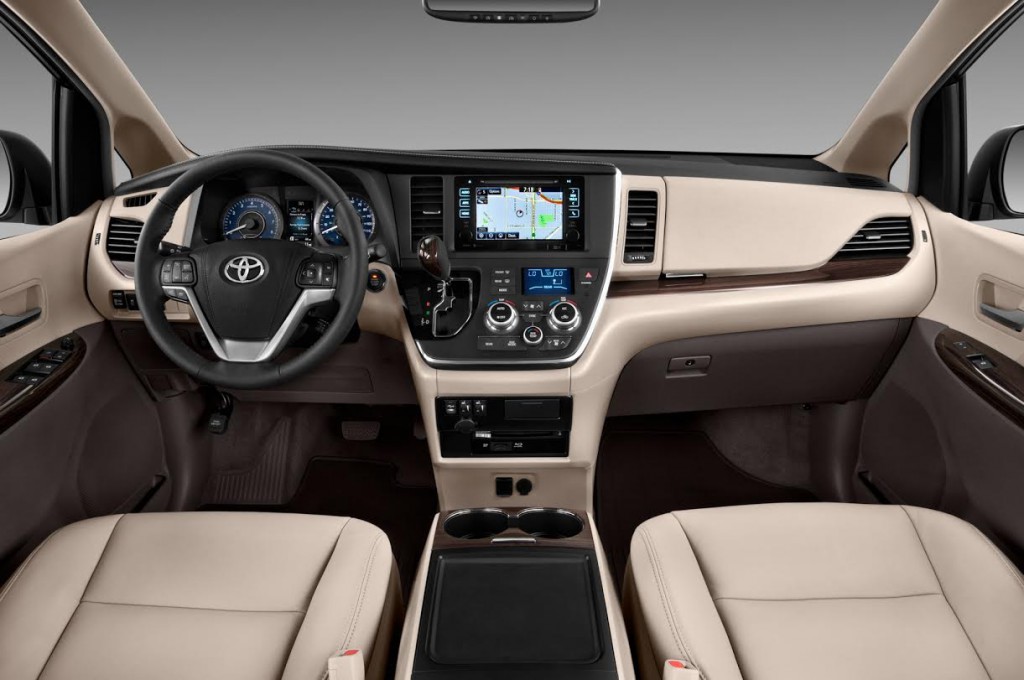 The 2015 Sienna’s dashboard is much improved in both layout and materials. This is an XLE model. 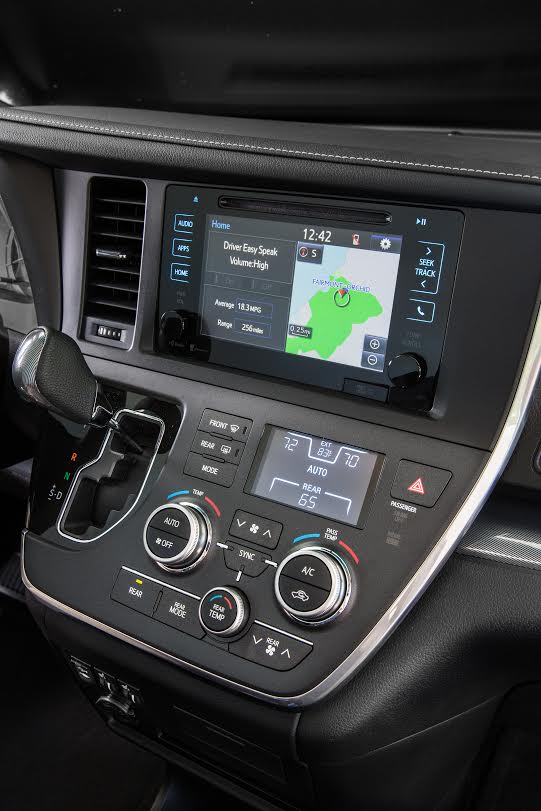 The redesigned dash features much-improved climate controls. The “SYNC” button between the temperature dials uses three lights to indicate whether the rear and front-passenger controls are synced with the driver’s master control.

However, the most substantial updates are on the inside. First off, all 2015 Siennas are noticeably quieter, thanks to 20 percent more floor insulation and an acoustic-glass windshield on XLE and Limited models. And, all get an upgraded interior with more soft-touch materials, padded surfaces, and attractive chrome and satin accents. The redesigned dashboard is improved in both appearance and ergonomics. The passenger side of the dash–which used to be an expanse of hard, cheap-looking plastic—is now padded and wrapped in handsome stitched leather-look material. The standard three-zone climate controls have been moved closer to the driver for easier access, and now feature three large, easy-to-use dials. Thanks to three clever lights linking the dials, the driver can tell at a glance whether or not the front-passenger- and rear-passenger controls are synced up with the driver’s master climate settings.

The driver instrument panel is upgraded with a 3.5-inch LED Multi-Information Display (MID) on L and LE models. A full-color 4.2-inch MID is standard in SE, XLE, and Limited models. It can display a broad range of info, such as vehicle settings, a navigation screen, audio info, Bluetooth phone-call info, and torque distribution on all-wheel drive models (Sienna remains the only minivan to offer AWD). A new 7-inch touchscreen is standard on all but the base L model, which gets a 6.1-inch version.

The available Entune App Suite utilizes a compatible smartphone to offer services such as Bing, iHeartRadio, MovieTickets.com, OpenTable, Pandora, and Yelp, as well as real-time info such as traffic, weather, fuel prices, sports, and stocks–all without requiring a subscription. To help keep the system up to date, the audio unit is capable of downloading new Entune apps as they are developed.

The Sienna’s rear-seat entertainment system was previously a standout because of its split-screen capability that enabled rear-seat passengers to enjoy two different entertainment sources at the same time. For 2015, it is upgraded to include Blu-ray capability, an HDMI input, and an SDXC card reader that can play 10 different audio and video formats.

Standard on high-end SEs and XLEs and all Limiteds is Toyota’s clever Driver Easy Speak system, which debuted in the redesigned-for-2014 Toyota Highlander SUV. We love features like this, because they simply make better use of hardware that is already in the vehicle. Driver Easy Speak uses the existing overhead-console microphone to amplify the driver’s voice through the third-row seat speakers at the touch of a button. Now you can tell Billy to stop hitting his sister without raising your voice at all.

Checking out the 2014 Toyota Sienna 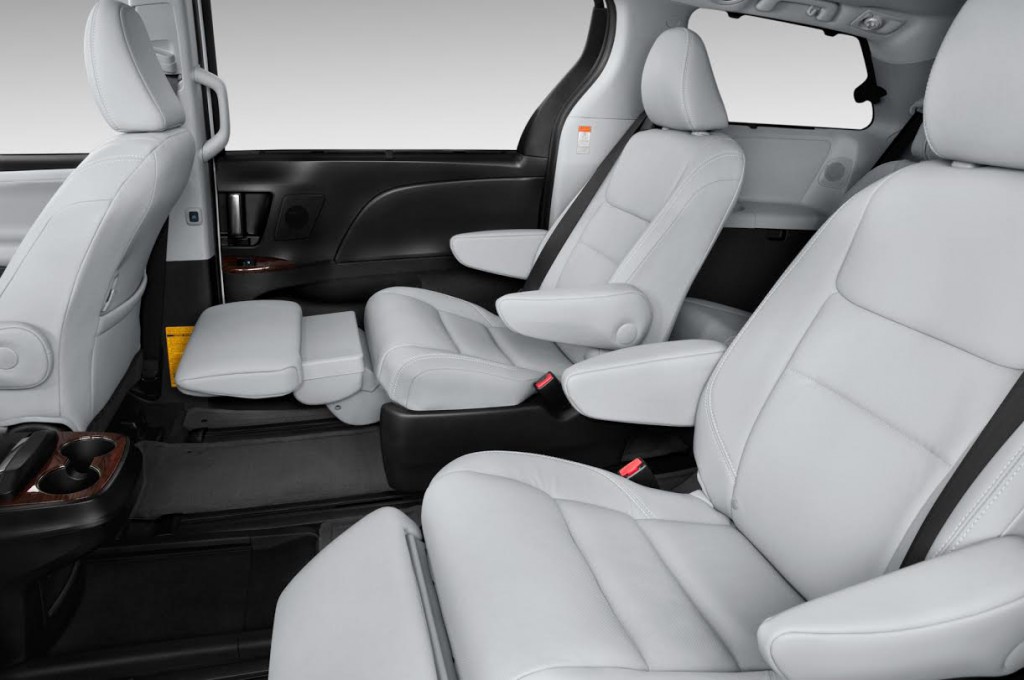 The loaded all-wheel drive Limited model we tested on the Sienna press preview event delivered ample acceleration, a comfortable ride, and predictable handling. Obviously no minivan handles like a sports car, but the Sienna’s steering is nicely weighted and body lean in turns is well controlled. And, the upgraded cabin materials make the Sienna’s interior a much nicer place to be.

The improvements for 2015 come at a cost… Sienna base prices increase by about $1000 on average over their 2014 counterparts. The base L model starts at $28,600, and the all-wheel-drive Limited Premium model starts at $46,150. Those numbers are still competitive against class rivals. In our book, the current crop of minivans is so good that there are really no losers in the bunch. Choosing the best one for your family boils down to personal preference… which features do you need the most? In that respect, the long list of enhancements and new equipment on the 2015 Sienna warrants putting it that much further up on your minivan shopping list.