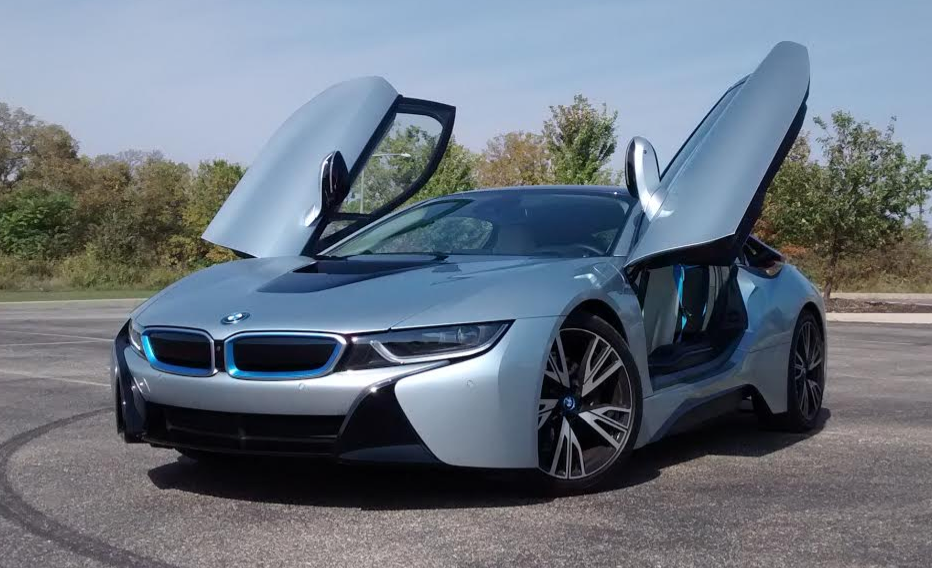 The 2015 BMW i8 boasts a hybrid powertrain that propels the vehicle to 60 mph in just over 4 seconds, yet earns the vehicle a 28-mpg rating (overall) from the EPA in gas-only mode.

While the words “sporty” and “hybrid” aren’t often seen in the same sentence, BMW is introducing a car that combines the two quite spectacularly – if also expensively.

A concept version of the exotic i8 sports car began making the Auto Show rounds some time ago. It awed onlookers not only with its futuristically swoopy looks, but also in the fact that it was a hybrid that promised exceptional performance. The i8 has now become a reality, and unlike some production versions of concept cars, it lost little in the translation.

Although not unique in its powertrain philosophy, the i8 is certainly unusual. Unlike most hybrid cars, it is all-wheel drive, though that’s also the case with some hybrid SUVs. But in the i8, the front-mounted electric motor drives only the front wheels, while the rear-mounted gas engine drives only the rear wheels, along with a generator; in hybrid SUVs, that situation is reversed (the electric motor drives the rear wheels).

But the i8 is also different in the way that power gets to the ground. In other electric or hybrid cars where the electric motor drives the wheels directly (rather than being connected with and aiding a gas engine), the motor sends its power through a single-speed transmission. In the i8, the motor sends its 129 horsepower through a 2-speed transmission. BMW says that’s to accommodate the i8’s impressive 155-mph top speed, which substantially tops that of any other current hybrid, at least those priced below the current crop of hyper-exotic hybrids including the LaFerrari, McLaren P1, and Porsche 918, all of which sport price tags approaching or exceeding $1 million. 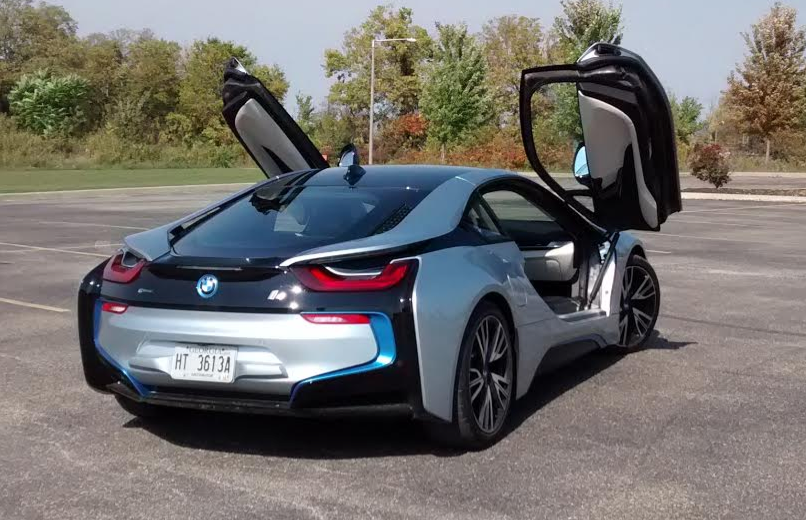 The i8 looks very much like the i8 Concept Car first seen at the 2009 Frankfurt Auto Show.

For the “gas” part of the powertrain equation, the i8 uses a turbocharged 3-cylinder engine producing 228 horsepower, sending that to the rear wheels through a 6-speed automatic transmission. BMW says the combined gas/electric rating of 357 horsepower is enough to push (and pull) the 3455-lb i8 from 0-60 mph in just 4.2 seconds, and our brief test drive didn’t give us cause to doubt that impressive figure.

Although a full road test isn’t merited until we get a longer exposure to the i8, our brief drive of one at a local event left us with some initial impressions.

For starters, getting in and out by ducking under the scissor door and over a wide door sill favors those who are lean and limber. Once inside, there’s decent room up front, but the rear seat is really just for decoration; even kids would be cramped back there, particularly if the seat ahead is pushed far back. There’s a small trunk behind the rear-mounted engine that would hold a weekend’s worth of stuff – if those “weekending” are prone to packing light. 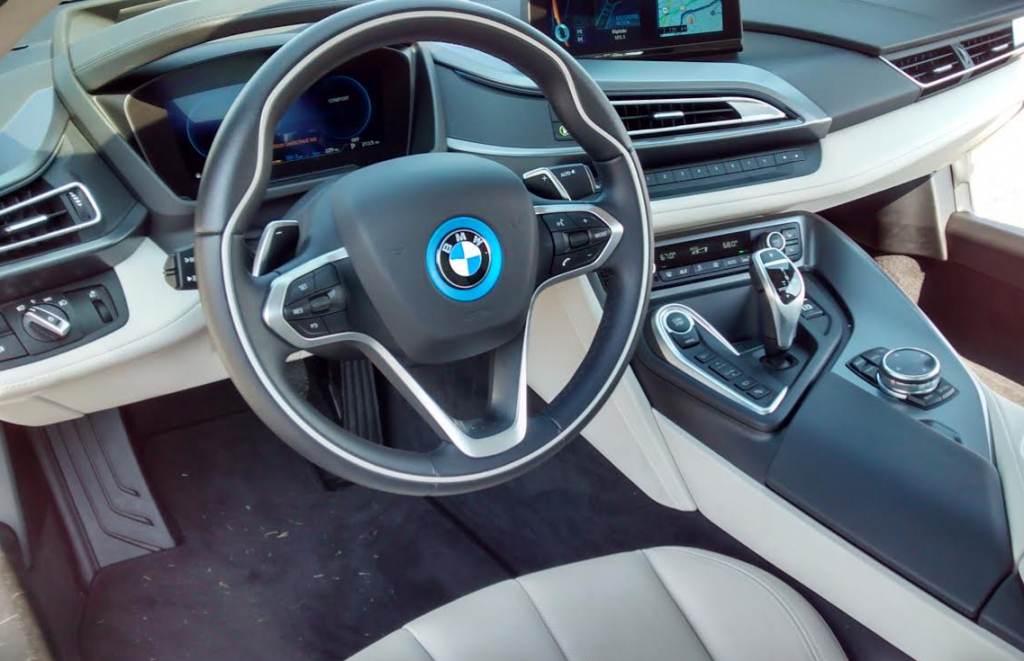 Given its exotic hardware, the i8’s cabin looks and feels surprisingly conventional.

But what the i8 sacrifices in accommodations it more than makes up for in dynamics.

Steering is razor-sharp and quick if almost completely numb, and there’s almost no body lean in turns. Though it doesn’t quite explode away from stops, it gets a good jump, and there’s plenty of “instant on” power at any speed.

If you put the transmission in “Drive,” the car will run off its 7.1 kW battery under just electric power (as long as you don’t dip deeply into the throttle) for what BMW says is as far as 20 miles and to speeds as high as 37 mph. If you call for stronger acceleration, the gas engine will automatically kick on to provide it. You can also select an eDrive mode that will use only electric power (limiting your rate of acceleration), and allow speeds up to 75 mph. In addition, there’s a Sport mode that forces the gas engine on, and power not used to drive the car can be used to turn a generator that helps recharge the battery. As in other hybrids and electrics, the battery gets some amount of recharge through regenerative braking, and like plug-in hybrids and electrics, it can also be plugged into a wall outlet to be fully recharged while parked. The EPA rates the i8 at 76 MPGe, which – while lower than other plug-ins such as the Chevrolet Volt (at 98 MPGe) – is still surprisingly thrifty for a car with this kind of performance potential.

Driving the BMW i3

One of the more appreciated aspects of driving the i8 is the sound. Whenever it’s in electric mode, it’s very quiet. But whenever the gas engine is on – and particularly when you mash the throttle – there’s a gloriously raspy exhaust note. Funny thing is, it’s not really the exhaust; it’s actually an electronically generated sound. But you wouldn’t be able to tell if someone hadn’t spilled the beans (sorry), and in the end, it really doesn’t matter; it’s just a terrifically sporting soundtrack.

Was the i8 originally conceived as the next M1? Click here and decide for yourself.

Besides the physical limitations of fitting inside, there’s another hurdle to i8 ownership: At a starting price of $135,700, not everyone can stomach the cost. And even those who can may run into a supply problem, for though BMW is offering the i8 nationwide, initial volume may lag initial demand.

But just the fact that such a car is available to the public is really quite shocking, at least to those of us who are used to seeing such futuristic concepts either fade into history or get substantially watered down for production. Credit BMW for remaining true to a concept that not only stretched the imagination, but also the boundries of how much “sport” could be packed into such a fuel-efficient hybrid.