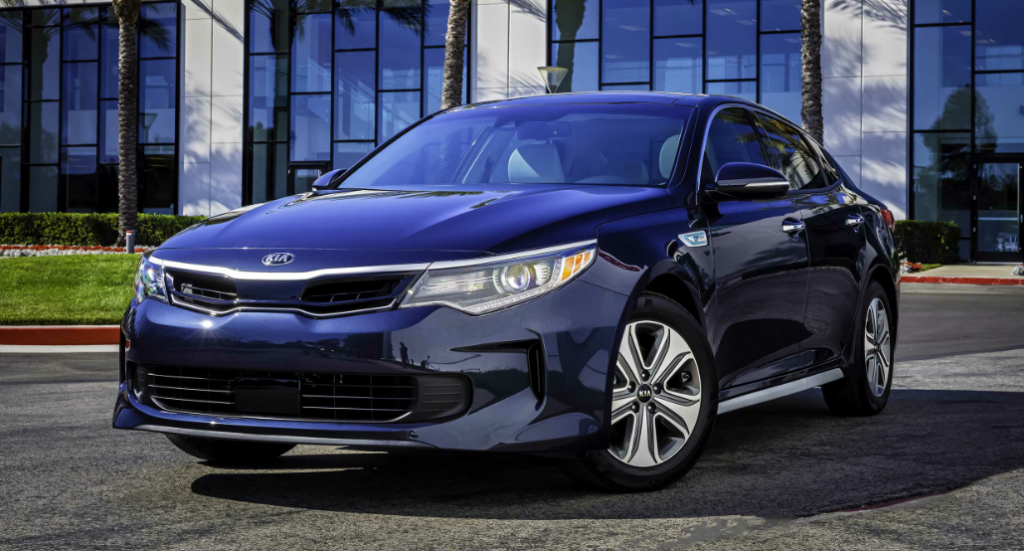 Kia’s redesigned-for-2016 Optima sedan lineup is expanding for 2017 with the addition of two new fuel-efficient models. The 2017 Kia Optima Hybrid and Optima Plug-in Hybrid are both introduced under Kia’s environmentally focused EcoDynamics sub-brand. They are part of Kia’s initiative to increase fuel efficiency by 25 percent across its entire model lineup by 2020.

The 2017 Optima Hybrid aims for a 10 percent improvement in fuel economy over the previous-generation Optima Hybrid’s EPA rating of 36 mpg city/40 highway. It uses a 2.0-liter GDI (gasoline direct injection) 4-cylinder paired with a 38 kW electric motor for 193 total horsepower. A 6-speed automatic is the lone transmission.

Other unique features of the 2017 Optima Hybrid include an active grille that opens and closes automatically to favor high-speed aerodynamics or low-speed engine cooling; aerodynamic alloy wheels; and a Coasting Guide feature that uses an icon on the instrument panel and an audible alert to coach the driver on when to coast and brake for optimal efficiency.

The Optima Plug-in Hybrid also uses a 2.0-liter GDI four and 6-speed automatic transmission, but couples them with a transmission-mounted 50kW electric motor. Kia estimates the Optima PHEV will travel up to 27 miles in full EV mode, with an estimated driving range of 600 miles.

In addition to sharing the features mentioned above with the Optima Hybrid, the Optima PHEV’s hybrid system features three driver-selectable modes: All-Electric Mode is suitable for short-range city driving, Hybrid Mode is for highway cruising, and Charging Mode increases energy direction to the battery when traveling at higher speeds.

The 2017 Kia Optima Hybrid and Plug-in Hybrid are expected to go on sale in the fourth quarter of 2016.

The redesigned 2016 Optima was an excellent revamping of a competitive midsize sedan, and the introduction of these new hybrids fills an important slot in the Optima model lineup. We’re anxious to test the new Coasting Guide feature to see how it aids efficient driving techniques.