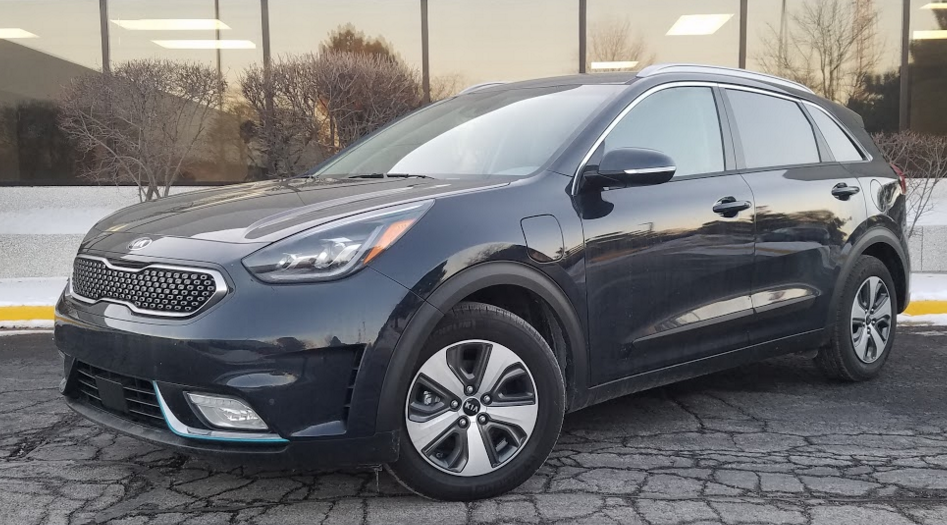 The not so good: No all-wheel drive offered

The headlong rush to automotive electrification continues its momentum in 2018 with the addition of a gas-sipping plug-in hybrid to the Kia Niro family of compact crossover SUVs. It’s an easy-to-live-with vehicle, and a natural extension of the existing line of conventional hybrids that wears the Niro badge. 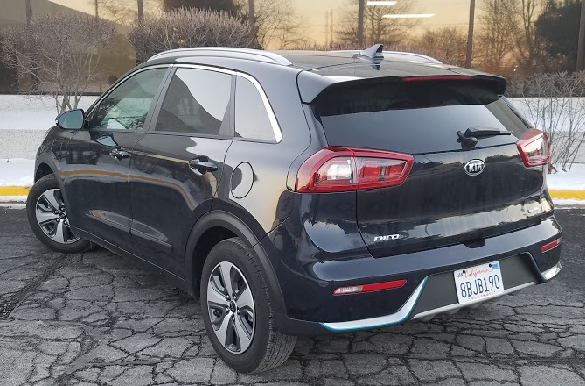 Kia says the Niro PHEV can run 26 miles on just electric power, but we actually managed to go a little farther: typically more than 28 miles.

The allure of plug-ins (“PHEV” stands for “Plug-in Hybrid Electric Vehicle”) is their ability to run solely on electricity for sometimes-considerable distances when the battery is charged. Given sufficient opportunity (and discipline on the part of the driver) to keep the vehicle charged, a plug-in can be more of an electric than it is a gas-engine job. The Niro is equipped with an 8.9-kWh lithium-ion polymer battery with an estimated range of 26 miles from a full charge. That holds the promise of a lot of gas-free local errand running, but even for longer commutes it can make a big dent in gasoline consumption.

In four days with CG’s test vehicle, this reviewer had the opportunity to start off from work or home in EV mode with a full charge on three occasions. Reported all-electric ranges were either 23 or 24 miles, but every one of those 28-mile one-way trips was completed with from one to three miles of indicated electric range remaining, thanks to charge fed back to the battery during coasting and braking along the route. The EPA gives the Niro plug-in’s electric motor an MPGe rating of 110 in city driving, 99 on the highway, and 105 combined. Note that our overall fuel-economy average of 44.3 mpg was due largely to one of our editors taking a 780-mile highway trip — which accounted for nearly 80 percent of our total miles — that was run almost entirely on gasoline.

Even when the battery is depleted to the point of not being able to sufficiently power the vehicle by itself, it still retains enough juice to join with the 1.6-liter 4-cylinder gas engine in a hybrid partnership, including brief returns to electric operation at low speeds. Designed with an economy-minded Atkinson-cycle valvetrain, the gas engine has EPA ratings of 48 mpg in the city, 44 on the highway, and 46 combined. With only one trip that required considerable use of the Niro in hybrid mode, this driver’s need for gasoline at the end of a 123.5-mile test stint — 71 percent of it city-type operation — came to 1.086 gallons. That stretched gas mileage to 113.7 mpg. 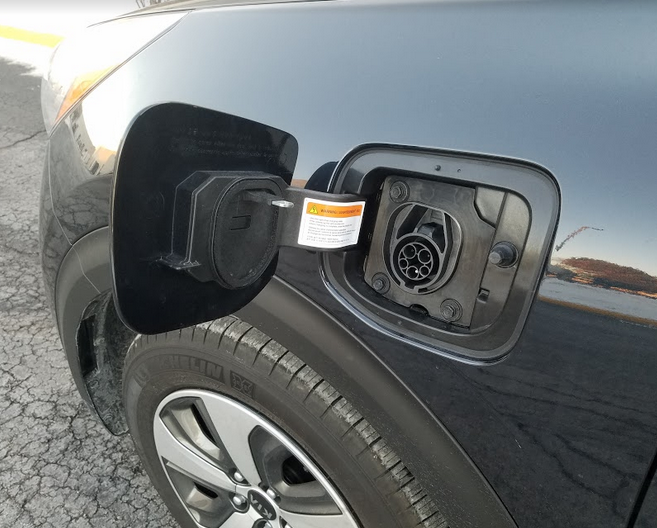 The plug-in door is in the left front fender, and the included power cord is — quite conveniently — longer than most.

Complete charges on CG’s 240-volt level-2 charger took about 2.5 hours. A level-1 charge from a 120-volt outlet at this tester’s home required seven hours. The standard-equipment level-1 charging cord was just long enough to stretch across the hood of the car and reach the port in the left-front fender — a small feather in Kia’s cap considering that some costlier plug-ins tested had cords too short to make home charging convenient.

Total system output, with gas and electric power working together in hybrid mode, comes to 139 horsepower and 195 lb-ft of torque. It makes the Niro lively enough to avoid feeling annoyingly (or even dangerously) sluggish. It also helps that the transmission is a dual-clutch 6-speed automatic and not a performance-tamping continuously variable transmission that’s commonly found in “eco” vehicles. Plus, a “Sport” mode that alters throttle response and shift points is included for times when a driver isn’t feeling all that green. Getaways in EV mode are a little more restrained, but still not all that bad considering that all of the electric motor’s 125 lb-ft of torque is instantly available to the front wheels. 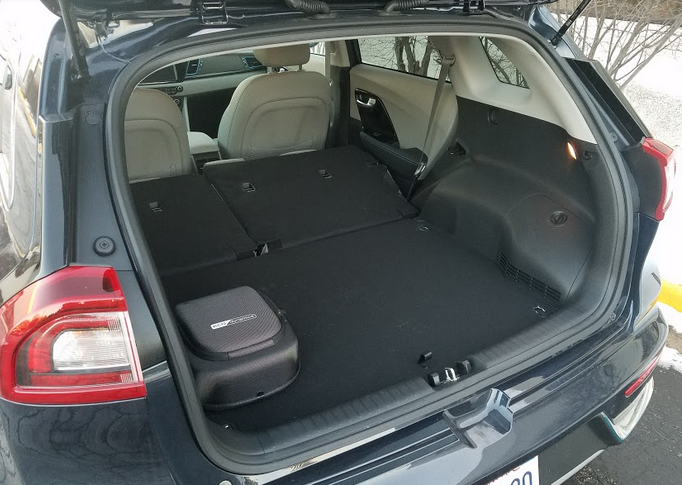 Some plug-ins sacrifice cargo space for their larger battery, but the Niro PHEV still has great cargo room, and folding the rear seat backs creates a flat load floor. That’s the charging cord in the box at lower left.

The Niro rides and handles well for a small vehicle. Steering is easy but not “sloppy.” There’s pleasing room in both seating rows — headroom is quite generous — and an adult might squeeze into the middle of the rear seat under the right conditions. Rear cargo space on the flat floor is usefully sized and shaped, and gets even better when the rear seats are folded down — which they do almost perfectly flat. The plug-in’s more extensive electric infrastructure does swallow up underfloor storage space that’s in the conventional hybrid models. 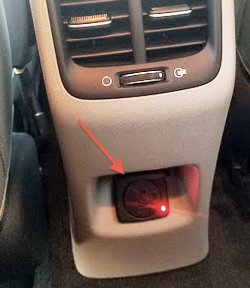 A nice touch is a 110-volt AC power outlet supplied to rear-seat passengers. 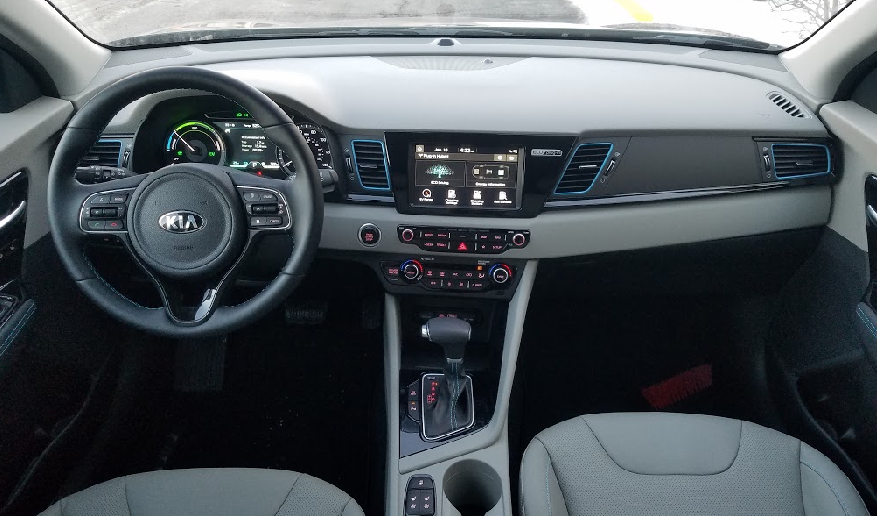 Controls are easy to use and see. The audio system has no complicated tricks for settings and access, and the information display in front of the driver is big and colorful. Personal storage is handled by a modestly sized glove box, a fairly deep covered console box, and front door pockets. There are bottle holders in all four doors, and cup holders in the console and pull-down center armrest. Soft-touch material is distributed well up front, but the tops of the rear doors get by with grained hard plastic. Electric-blue stitching and vent moldings added a pleasing dash of color to the light-gray-and-black interior.

The Kia Niro plug-in is useful, frugal, and affordable. Small SUV buyers ought to get a charge out of that.

For many folks, a plug-in hybrid makes the best “electrified” choice, as you can often run your daily commute on just electric power, yet have a gasoline engine for long distances. And the Niro PHEV turned out to be a great plug-in hybrid.