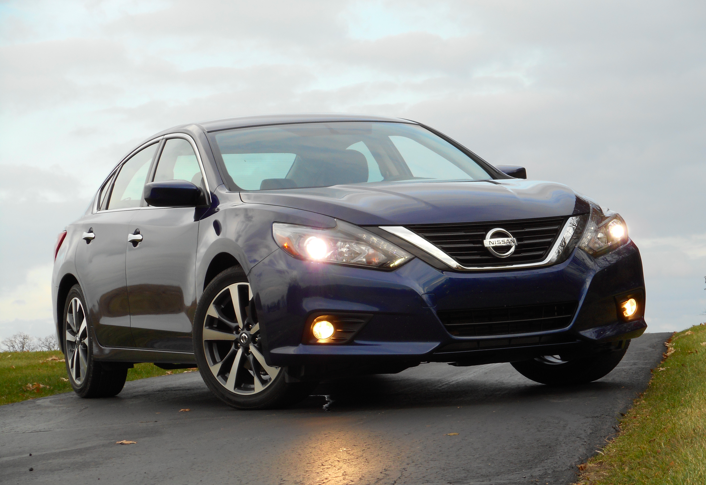 Although the body is unchanged, the face is new. Altima adopts Nissan’s “corporate” V-Motion grille for 2016 along with several added high-tech safety and infotainment features.

The perennially favorite Toyota Camry and Honda Accord have long been the front-runners in the midsize-sedan race, but it might surprise some to learn that the Nissan Altima is now coming in a strong third. That puts it ahead of such well-known competitors as the Chevrolet Malibu, Ford Fusion, Hyundai Sonata, and Subaru Legacy.

In recent years, however, the Altima has fallen behind its top rivals in terms of available features. It was also a holdout in adopting Nissan’s current corporate nose featuring the company’s signature “V-Motion” grille. Both of those elements have been addressed with a freshened 2016 model, which also adds a new sport-oriented trim level and boasts revised tail-end and interior treatments along with what Nissan says are now best-in-class EPA fuel-economy figures (not counting hybrids).

With some new items added this year, the Altima offers an impressive list of available high-tech safety features. These include: 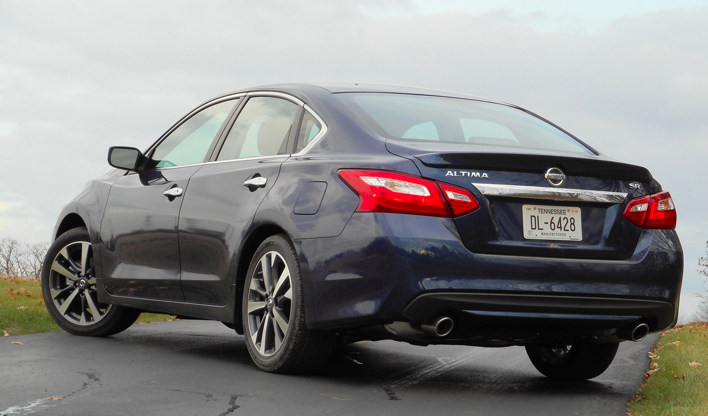 Altima’s rear-end treatment is also revised, and a sporty SR trim level (shown) has been added.

Other new features include adaptive cruise control (which maintains a set following distance even if the car ahead is moving slower than your set speed), and NissanConnect with Mobile Apps, which interacts with your smartphone to access apps, music, phone contacts, and maps, and also includes Siri Eyes Free and hands-free text messaging.

Altima is now available in five trim levels, with some offering package upgrades such as a navigation system or sunroof. Most come with a 182-horsepower 2.5-liter 4-cylinder engine with CVT automatic transmission, though two models can be had with a 270-horsepower 3.5-liter V6. Those with the four get an EPA rating of 27 city/39 highway (26/37 for the SR – more on that later), the latter figure up by one mpg over last year due to engine and aerodynamic improvements. The V6 is rated at 22 city/32 highway.

The Base model starts at $22,500 and includes all the basics, though Nissan expects it to account for less than five percent of sales. That’s because an extra $400 moves you up to the $22,900 S, which adds a rearview camera, NissanConnect with Mobile Apps, USB port, and automatic headlights. That makes it a relative bargain and what Nissan expects to be the most popular trim level. 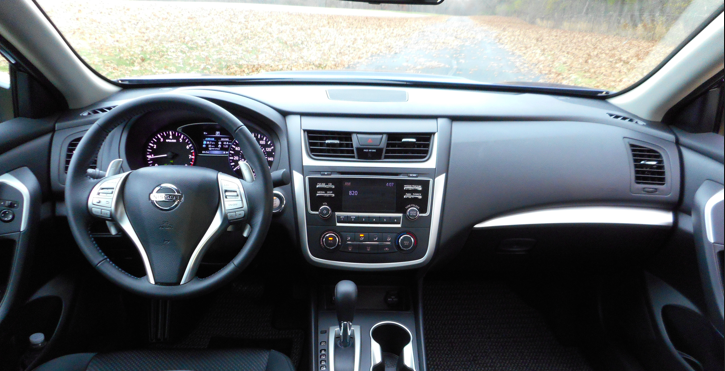 Lower-line models get an audio system with a 5-inch touchscreen along with volume and tuning knobs and six station pre-select buttons, while the climate controls consist of easy-to-use rotary knobs with individual mode buttons.

Added above the S is the sporty new SR, which starts at $24,470. Aimed at similar sport-flavored midsize sedans such as the Toyota Camry SE and Honda Accord Sport, it brings 18-inch wheels with wider tires, sport suspension, a rear spoiler, fog lights, 10-way power driver’s seat, and paddle shifters to the table. Although the 2.5-liter four is standard, it’s also offered with the V6 engine. 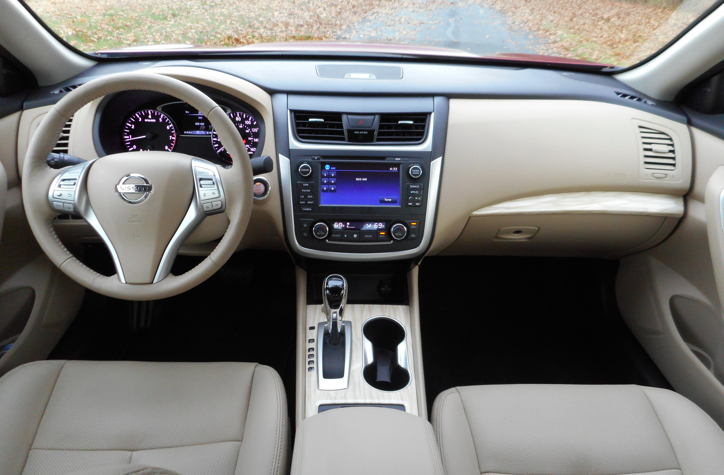 Higher-line models are offered with two-tone color schemes, and navigation-equipped versions get a 7-inch touchscreen that absorbs the station-select buttons and leaves primary climate functions (except temperature) to be controlled with repetitive-step pushbuttons.

From the driver’s seat, visibility is good to all angles thanks to thin roof pillars – something that can’t be said of all cars in this class – though when swung to the side, the sunvisor doesn’t quite cover the window. There’s good but not great headroom and legroom in front, while rear-seat space is at least adequate for adults even with the front seats all the way back.

Interior storage is about average for the class. There’s a decent-size glovebox, a forward console bin with Aux/USB/12-volt plugs (at least on the SV tested), a large 2-tier console box with 12-volt plug, and map pockets with cupholders in the doors.

Perhaps a bit below average is the material selection. The dash face is padded but not the top. Armrests have deep padding, but the door tops are very lightly padded. The tested SV had a rather staid-looking black interior with matte silver trim, though available two-tone combinations helped brighten things up a bit.

The control layout varies by trim level. An SR we drove had a 5-inch touchscreen with volume and tuning knobs along with six station-preset buttons. Climate controls consisted of rotary fan and temperature knobs and individual mode buttons – a very handy and easy-to-use layout.

Models with navigation system get a 7-inch touchscreen that absorbs the station-preset buttons, though volume and tuning knobs remain. There’s a rotary knob for temperature adjustment, but fan and mode adjustments are through repetitive-step pushbuttons – overall, not quite as easy to use.

Trunk space is about average for the class, but it’s not as accommodating as some. The area is wide at the rear, but sickle-shaped hinges dip into the load area, and there’s very little underfloor storage. Furthermore, folding the rear seat backs leaves a restricted opening and a 3-inch step, and the seat backs don’t lay nearly flat, all of which limits the size of what can be shoved forward and the ease in doing so. 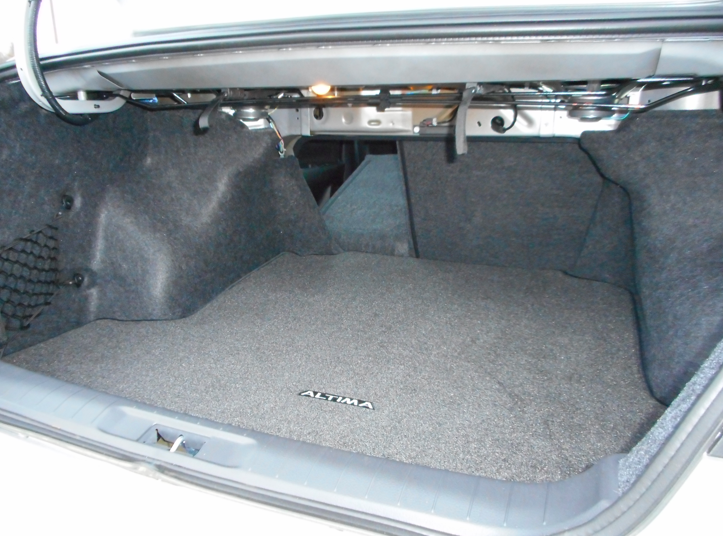 The rear seat backs fold to expand the cargo area (only the left-side one is folded down in this photo), but the opening revealed is restricted in size, and the seat backs rest about 3 inches above the cargo floor and don’t lay flat.

On-road dynamics are also about average. Altima has a quiet, composed ride with fine handling, while the SR model is predictably a bit stiffer, with a slightly beefier steering feel and less body lean in turns.

We didn’t get a chance to test a V6 model, but acceleration with the 4-cylinder engine is more than adequate. Nail the throttle from a stop, and the car gets a decent – though not great – jump off the line. The CVT transmission is programmed to provide what feel like conventional “shifts,” which will sound better to most people than the high-revving “rubberband” effect characteristic of some CVTs, and also helps keep engine noise at bay. However, hit the gas at speed, and the transmission is often a bit slow in downshifting for more power.

While it’s unlikely the Altima will be able to overtake the Honda Accord for 2nd place in the midsize market (the Accord also receiving notable enhancements for 2016), it will undoubtedly remain a strong contender. We wish more of the newly available safety features were offered on lower-line models – as they are on the Accord – but Altima is still a very good choice and a “must see” among midsize sedans.