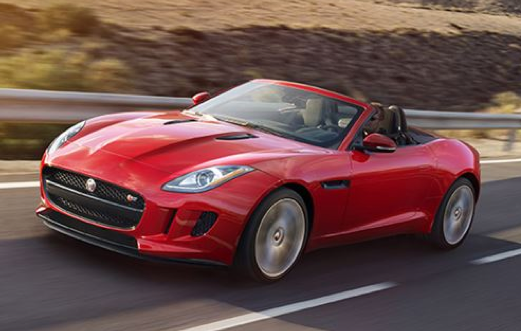 The 550-horsepower-V8 F-TYPE R is now available as a convertible as well as a coupe, while the 340-hp V6 and 380-hp V6 S coupes and convertibles continue. The all-wheel drive system, which Jaguar calls Instinctive All Wheel Drive, is standard on R models and optional on S models. Engineers strove to maintain a rear-wheel-drive feel and driving character in the AWD models; the system sends 100 percent of the engine’s torque to the rear wheels in normal driving conditions, and can transfer up to 50 percent of the engine’s torque to the front wheels if the system determines the rear wheels are at the limit of available traction. All-wheel-drive models also get a new hood design and distinctive bodywork. Jaguar quotes a 0-60 time of 3.9 seconds and a top speed of 186 for F-TYPE R models.

The 6-speed manual transmission is available only on rear-wheel-drive V6 models; it features a short-throw shifter and pedals that Jaguar says are ideally placed for heel-and-toe downshifting.

Jaguar introduced the F-TYPE as a convertible-only model for 2014, then added a coupe body style for 2015. We’re a bit surprised (and happy) to see so many updates and upgrades for 2016. The addition of all-wheel drive to the F-TYPE lineup is an intriguing surprise; it presents an interesting alternative to all-wheel-drive Porsche 911 Carerra 4 intenders. We’re also pleased to see the availability of a manual transmission, which should bolster the F-TYPE’s “true sports car” credentials.