Prius has long been a mantle piece of the green-car crowd, often outselling all its competitors combined. And for a few years prior to the car’s 2016 redesign, the Prius also offered an even thriftier (though far less popular) plug-in version, which is due to return. Even if that happens, Ioniq will match the Prius and do it one better, adding an all-electric variant to the mix.

With that, Hyundai claims that the Ioniq becomes the first vehicle to offer three distinct electrified powertrains on a single, dedicated platform. 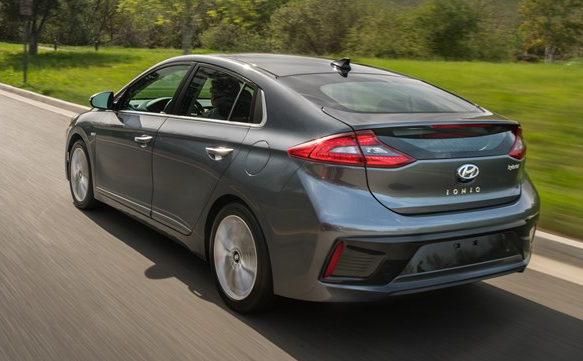 Hybrid and plug-in hybrid versions share a 1.6-liter Atkinson-cycle 4-cylinder engine mated to a 6-speed automated manual transmission that works much like a conventional automatic. Hybrids add a 43-horsepower electric motor for a combined system output of 139 horsepower. (By contrast, the Prius engine/motor combination is rated at 121 horsepower.) Plug-in versions get a stronger electric motor rated at 60 horsepower and offer an all-electric driving range of about 25 miles. Unlike most hybrids, neither of the Ioniqs use a conventional 12-volt battery to “light things up,” saving approximately 25 lbs. (and the chore of replacing it).

The all-electric Ioniq competes against established rivals such as the Nissan Leaf and “corporate cousin” Kia Soul EV. Its 120-horsepower electric motor and 28 kWh lithium-ion polymer battery combine to give it a claimed 110-mile range and a 125 MPGe EPA estimate. Hyundai says the battery pack, which is located under the rear seat (rather than under the floor as in most electrics) is 20-percent lighter than a comparable non-polymer lithium-ion battery.

On-sale dates for the various Ioniq versions have yet to be released.

Hybrids, plug-in hybrids, and electrics are a hard sell when gas is dispensed at 2 bucks a gallon, but the Ioniq concept — that of offering buyers a choice of “greenery” on the same platform — seems solid. It will all come down to cost (both of the car and of gas), but Hyundai may have a hat trick here that finally gives Prius and Leaf a run for their kilowatts.