At the 2018 Chicago Auto Show, Volkswagen officially took the wraps off the North-American-market version of the successor to its stylish CC midsize sedan. The 2019 Arteon is fastback-styled 4-door hatchback sedan that will slot above the Passat sedan in VW’s lineup.

The Arteon is based on Volkswagen’s “MQB” vehicle architecture, which also underpins the Golf compact hatchback, the redesigned-for-2019 Jetta compact sedan, and the Atlas and Tiguan SUVs. Compared to the CC, the Arteon is a bit longer and wider, and has a 5-inch-longer wheelbase for improved cabin space. 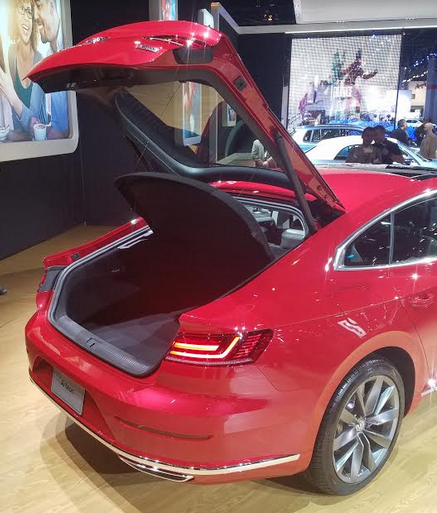 Arteon trim levels stick to VW’s SE, SEL, and SEL Premium hierarchy. The sole powertrain at this point is Volkswagen’s turbocharged, direct-injection 2.0-liter 4-cylinder, which puts out 268 horsepower and 258 pound-feet of torque and is paired with an 8-speed automatic transmission. Front-wheel drive is standard, and 4Motion all-wheel drive is available on all trim levels.

The Arteon is slated to go on sale in the third quarter of 2018.

The recently departed Volkswagen CC always impressed us as a vehicle that was much more than the sum of its parts—it offered style and a premium feel that compared favorably to “true” luxury brands at a price of a decked-out mainstream midsize sedan. Volkswagen hasn’t yet released pricing on the Arteon, but if it comes in the ballpark of the CC, this car should be a sure-fire winner. The Arteon’s styling looks fantastic, and Volkswagen’s excellent MQB architecture has impressed us on the Atlases and Tiguans we’ve tested.