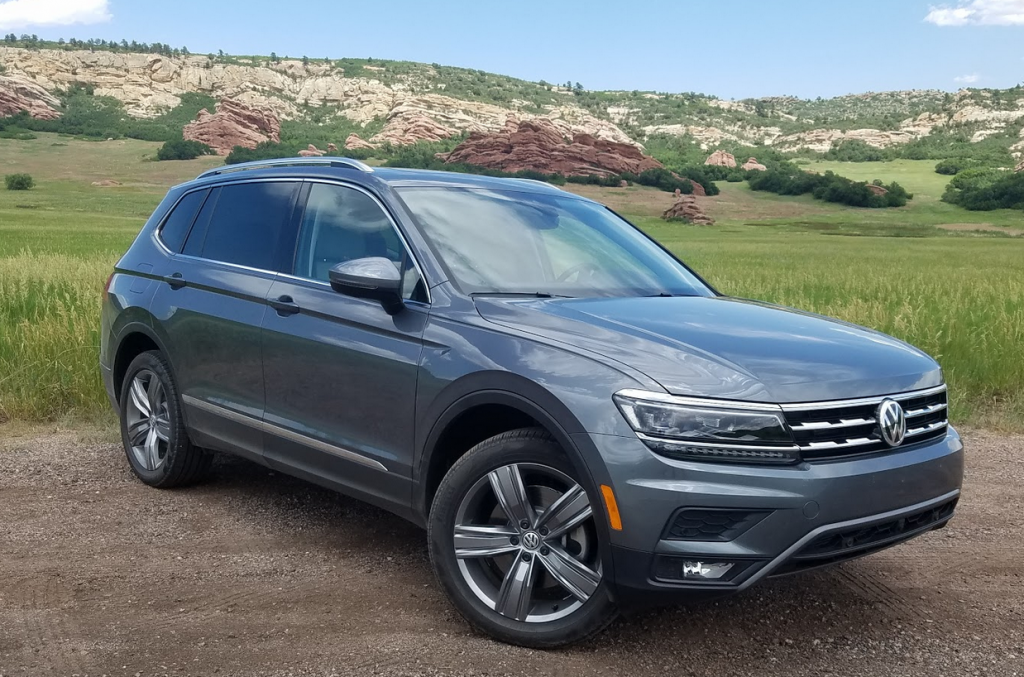 All of the sudden, Volkswagen is back in the crossover SUV game in a big way. Hot on the heels of the recently launched Atlas midsize SUV comes the long-awaited (some would say long overdue) second generation of VW’s Tiguan compact SUV.

When it goes on sale late this summer, the new Tiguan will be the third U.S.-market vehicle (after the latest-generation Golf family and the Atlas) to utilize VW’s scalable Modular Transverse Matrix platform (In German, it’s called Modularer Querbaukasten, or  “MQB” for short). The new architecture allows for significant variations in overall footprint, as evidenced by the diversity in size of the Tiguan’s platform partners. 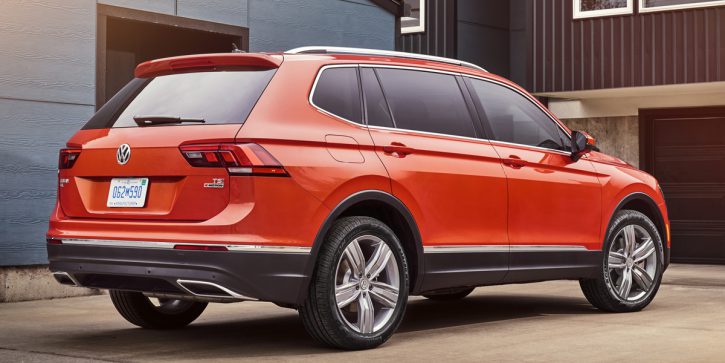 The second-generation Tiguan is 10.6 inches longer overall than the first-generation model, which greatly improves cargo space and enables Volkswagen to offer a third-row seat. The SEL Premium comes standard with 19-inch wheels.

The new Tiguan is also notably larger than before; it’s almost an inch wider, 7.3 inches longer in wheelbase, and a full 10.6 inches longer overall than its predecessor. That copious stretch made it possible for VW to squeeze in an available third-row seat, making the Tiguan one of just three vehicles in its class to offer one (the other two are the Nissan Rogue and the Mitsubishi Outlander). The third-row seat is standard on front-wheel-drive Tiguans and is available on all-wheel-drive models as a $500 option.

The main benefit of the new Tiguan’s stretched body is improved cargo space. The first-gen Tiguan offers 56.1 cubic feet of cargo volume with its second-row seats folded. The new one boasts 65.7 cubic feet when equipped with the third-row seat, or 73.5 in two-row form—numbers that compare favorably with the best in the compact-SUV class. Inside and out, the Tiguan has a classy, understated European feel. SEL Premiums include leather upholstery and a Fender-brand premium audio system.

Technically, the second-generation Tiguan that we are getting in the U.S. is an extended-wheelbase model; in Europe and some other world markets, Volkswagen is also selling a short-wheelbase second-gen Tiguan in addition to the LWB model (which is branded “Allspace” to differentiate it from the SWB version). In America, Volkswagen has elected to continue selling the first-generation Tiguan (which is still being purchased in very respectable numbers, thank you) as its shorter-wheelbase, two-row offering; it is slated to hang around for at least a couple more years with a simplified model lineup as the “Tiguan Limited.”

The SEL ($32,550) gets that sunroof as standard equipment, along with 18-inch alloy wheels, 8-inch touchscreen display with navigation, adaptive cruise control with stop-and-go functionality, a power liftgate, remote start, and an alarm. 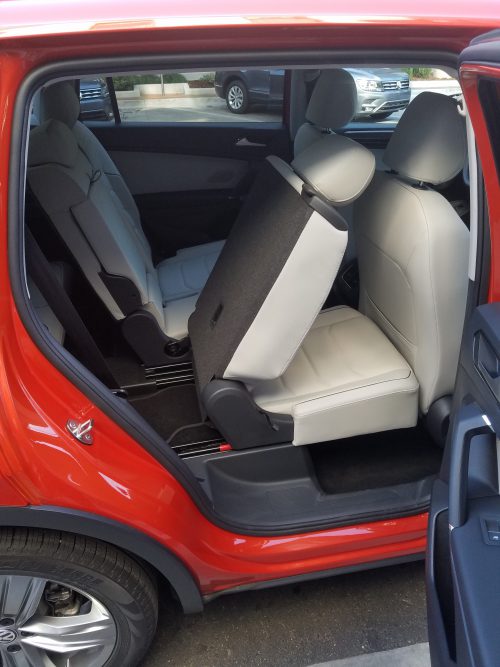 The Tiguan’s second-row seats slide fore and aft up to seven inches to favor passenger room or cargo space–and to ease access to the available third-row seat.

Volkswagen’s 4Motion with Active Control all-wheel-drive system is available on all trim levels for an additional $1300. A sporty R-Line Package, available for $1795 on the SEL or $1495 on the SEL Premium, includes specific 19-inch (SEL) or 20-inch (SEL Premium) wheels, unique front and rear fasciae, wheelarch extensions, bodyside skirts, and special badging. The base S model can be upgraded with an $850 Driver Assistance Package that includes the rear cross-traffic alert and forward collision warning with autonomous emergency braking systems.

Regardless of trim level, the Tiguan’s sole powertrain is the latest version of VW’s turbocharged 2.0-liter four-cylinder paired with an 8-speed automatic transmission. The engine puts out 184 horsepower and 221 pound-feet of torque and comes standard with fuel-saving engine start/stop technology (the start/stop feature can be turned off at the touch of a button, but the system defaults to on when the vehicle is restarted). EPA fuel-economy estimates are 22 city/27 highway/24 combined with front-wheel drive and 21/27/23 with all-wheel drive. The AWD system has four driver-selectable modes for optimized powertrain performance over varied terrain: On-road, Snow, Off-road, and Custom off-road. Within the On-road setting are Eco, Normal, Sport, and Custom drive modes that alter tuning parameters for throttle response, transmission, steering, and the available adaptive cruise control. Maximum towing capacity is 1500 pounds with either FWD or AWD.

The Tiguan is the only European-made competitor in the popularly priced compact SUV category, and that certainly becomes visually apparent when you line up the new Tiguan with its class competitors. In a segment with no shortage of swooping bodylines and arguably over-assertive front-end styling, the Tiguan’s angular, quietly confident look is a refreshing change of pace. From the deeply “chiseled” sculpted beltline to the subtly detailed chrome grille bars, it exudes understated European class.

The upscale vibe carries over to the interior as well. The top-line SEL Premium model obviously has a luxurious cabin with classy leather upholstery and lots of other high-end trim features, but even the cloth upholstery in the base S model has a sturdy, high-quality look and feel. The cabin is laudably quiet, too—wind, road, and engine noise are all nicely muffled for the most part. The engine note intrudes a bit in fast acceleration, but we didn’t find that objectionable—Volkswagen’s turbo 2.0 is one of the better-sounding 4-cylinder engines out there.

The Tiguan offers 12 cubic feet of cargo space behind its third-row seat, and 33 cubic feet with the third row folded.

We’re also fans of VW’s MIB II infotainment system, which offers a competitive suite of connectivity features (including VW’s Car-Net subscription-based services); bright, easy-to-read displays; and snappy response times to inputs (i.e., you’re not stuck wondering whether your tap or finger swipe registered). In addition to aux and SD card ports, Base S models have one USB port, SEs have two, and SEL/SEL Premiums have three. Despite all of the touchscreen functions, VW wisely stuck to “analog” volume and tuning knobs, which we find much easier to access and operate than virtual controls.

The Tiguan’s rangy, 109.8-inch wheelbase—just over five inches longer than a Honda CR-V or Toyota RAV4—allows for generously sized door openings that make entry and exit easy. The front seats are plenty roomy for most adults, though the available panoramic sunroof’s housing can intrude a bit on headroom for extra-tall passengers in both the first and second rows. The second-row seats slide fore and aft up to seven inches to favor second row legroom or rear cargo space (or third-row legroom, if so equipped); the seatbacks also fold or recline in a 40/20/40 split. 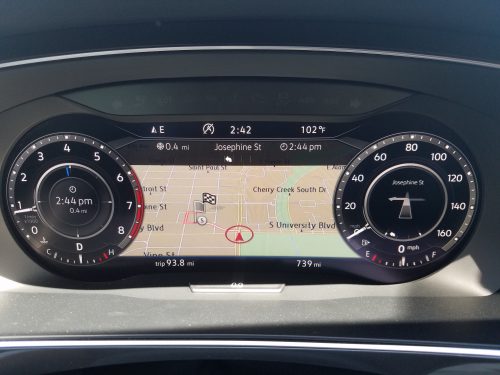 Sliding the second-row seats forward and tilting the seatbacks forward eases access to the available third row, but those seats are best suited for small children or “emergency” use. Like the Nissan Rogue and Mitsubishi Outlander, the Tiguan’s third row is too small to be long-haul hospitable to most passengers of an age in the double digits. And despite the Tiguan’s class-leading wheelbase, the second-row space doesn’t really trump any of its primary competitors; legroom is 36.5 inches on three-row Tiguans and 38.7 on two-row models. For comparison, the Honda CR-V has 40.4, the Hyundai Tucson has 38.2, the Toyota RAV4 has 37.2, and the three-row Nissan Rogue has 37.9. The Tiguan’s second row will be comfortable for most adults when the seats are adjusted all the way back, but accommodating third-row passengers will likely necessitate some compromises.

Dynamically, the Tiguan satisfies with a comfortable, absorbent ride (thanks in part to the long wheelbase) and composed handling. The 19-inch wheels on SEL Premiums take a slight toll on ride quality compared to the 17s and 18s on the others. (The sporty R-Line models, which we didn’t have the opportunity to test, will likely ride stiffer still.) The steering is nicely balanced; it feels smooth, with a relatively quick ratio, but offers good road feedback.

We were a bit disappointed in the Tiguan’s powertrain performance, however. The turbo 2.0’s 184-horsepower rating is on par with most class competitors, but this engine didn’t seem to play particularly well with its 8-speed automatic gearbox. Downshifts for extra power were often tardy—even with a deep stab of the throttle pedal—and the transmission sometimes seemed to dither a bit before finding the ideal gear. Likewise, throttle response from a stop was fairly lackadaisical—we blame gas-pedal tip-in tuning that’s a bit too “soft” for our tastes. Maybe we’d acclimate to it over time. Also, the high altitudes and steep climbs of the mountainous terrain on our Denver-area drive routes likely affected our perceptions slightly… we’ll see if our impressions change once we test a Tiguan on the flat Midwestern roads of our Chicago-area home office.

Even with its powertrain shortcomings, the Tiguan is a solid entry into the hotter-than-ever compact SUV market. Its Euro-cool looks, classy trimmings, spacious cabin, available (if compromised) third-row utility, and user-friendly infotainment systems make it a compelling alternative to its American and Asian rivals. 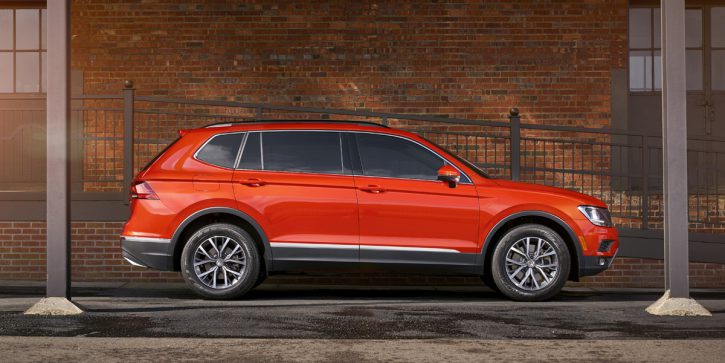