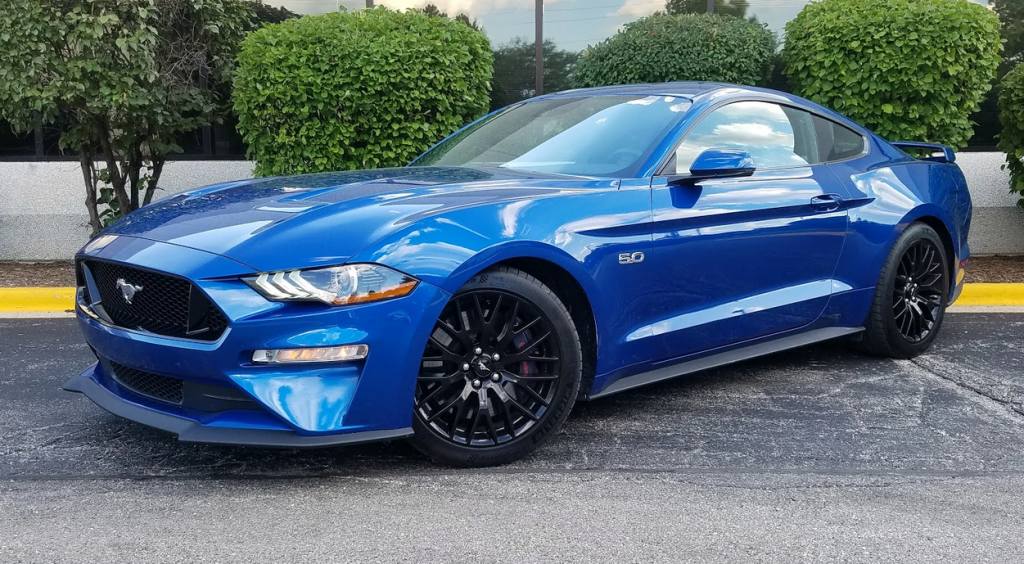 The good: Decent interior room for a sporty coupe

The not so good: Fuel economy, prices get steep as options are added

It used to be that anybody who made serious use of a sports car or other high-performance vehicle wouldn’t be caught dead without a manual transmission. Well, used to be is a long time ago now, and the selective-gear transmission stands in an ever-narrowing spotlight on the automotive stage, even in sports machinery. Thanks in large part to leaps in electronics technology, automatics are now quick-acting and more efficient than they’ve ever been, delivering faster track times and better potential fuel economy than concurrent manuals. 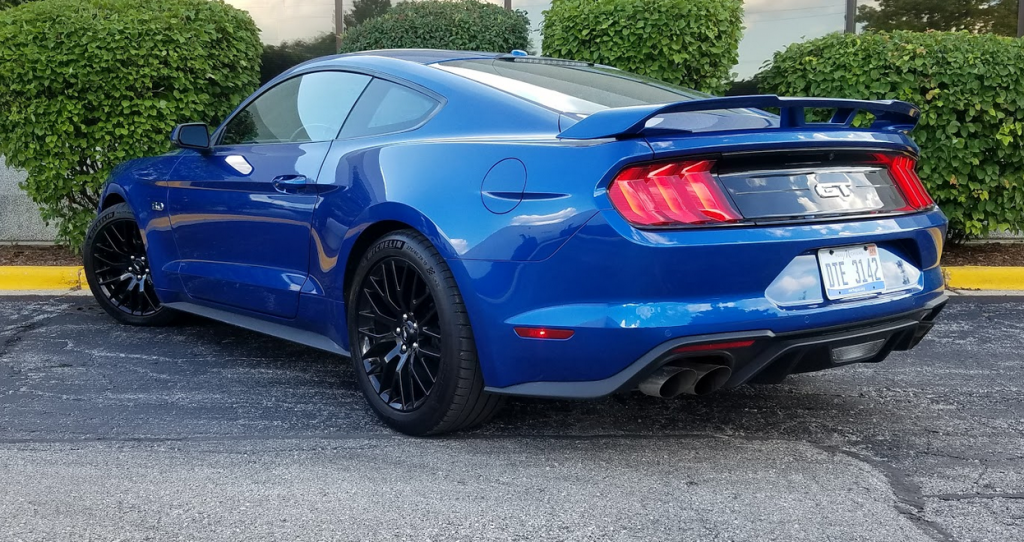 There’s always been an automatic transmission available for Ford’s genre-birthing Mustang “ponycar,” but it’s a long way from the 3-speed Cruise-O-Matic of 1965 to the 10-speed autobox that is new to the lineup for 2018. Consumer Guide followed up its test of a 6-speed-manual ’18 Mustang GT with a week in a Lightning Blue Metallic GT with the optional automatic. 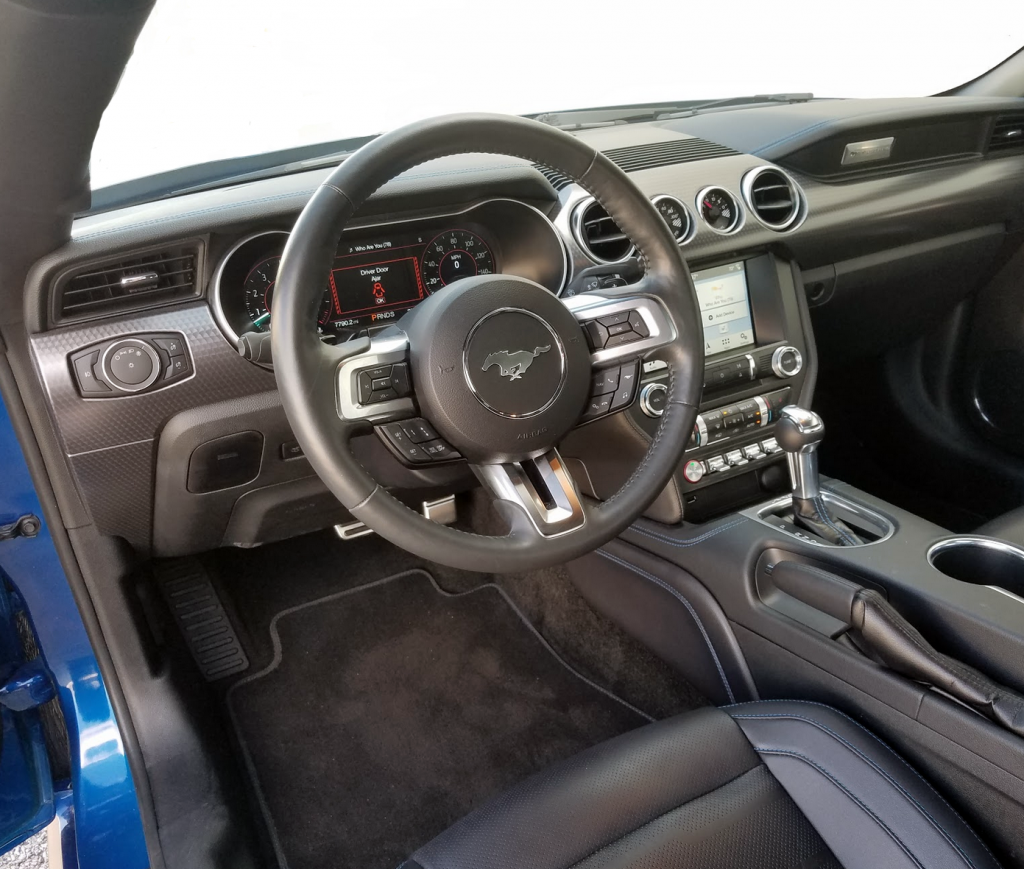 The 10-speed automatic is the product of something that would once have come about only under the coldest conditions imaginable: a collaboration with General Motors. Indeed, the same transmission can be found nestled in the chassis of the Mustang’s longtime rival, the Chevrolet Camaro. In “Normal” drive mode at part throttle—typical for around-town driving—upshifts happen in the Mustang GT around 1700 to 2000 rpm; in “Sport+” mode they hit about 500-700 rpm later to extract additional power from each gear range. Shift force changes from slightly perceptible in Normal to crisper with a bit of a kick in Sport+, and with the optional active-valve performance exhaust doing the voiceover work, the switchover ramps the note up from Normal’s gargle to Sport’s growl and distinct barks as downshifts happen during braking or coasting periods. The engine’s generous midrange torque provides no-doubt highway passing after the trans briskly kicks down two or three gears. Note that additional specialized drive modes labeled “Track,” “Drag Strip,” and “Wet/Snow” are also included.

On paper, the 10-speed automatic helps the Mustang GT get better fuel economy than it could with the manual—by an additional mile per gallon in both city and combined driving, according to EPA figures. However, that’s all pretty academic at a projected 16 mpg in city use, 25 mpg on the highway, and 19 combined. Indeed, CG testers didn’t do that well, logging a collective 15.3 mpg with 65 percent of their driving under city-type conditions. The best single performance was 15.52 mpg. A fuel miser the GT isn’t.

There was one other key difference between the two GT test cars and that was trim level. The automatic job was a Premium coupe with a starting price of $39,995 delivered, which is $4000 more than Ford charges for the “base” GT. The extra money buys additional soft-touch material that shows up on the door tops and centers. Seats are upholstered in leather, and the front buckets are heated and cooled. Ambient lighting, aluminum pedal faces, and illuminated doorsill plates are other interior upgrades, and the external power mirrors are heated and incorporate “pony” projection lamps. Premium-level comfort and convenience items include dual-zone automatic climate control, a 9-speaker audio system with satellite radio, Sync 3 infotainment interface, universal garage-door opener, and the selectable drive modes.

The Mustang GT’s 460-hp 5.0-liter V8 is an invigorating powerhouse that works quite well with the $1595 10-speed automatic transmission. Active Valve Performance Exhaust is an $895 option.

The Midnight Blue bucket seats in the test car were the standard design with 6-way power adjusters and a power lumbar setting for the driver’s seat. They are less confining than the grippier optional Recaro sport seats that were in our stickshift GT test car, but one tester felt the standard seats lacked sufficient support and preferred the sport seats even though they don’t have power controls.

In other respects, a GT is a GT, regardless of transmission or trim, with a firm ride, well-controlled handling, generally uncomplicated infotainment and climate controls, good-for-a-sports-coupe driver sightlines, and rear seats far better suited for expanding the modest cargo capacity than they are for welcoming additional passengers.

Though it’s near-sacrilege to old-school muscle-car fans, the 2018 Mustang GT’s 10-speed automatic transmission is an excellent gearbox that delivers convenience as well as quick-shifting performance when the desire arises.