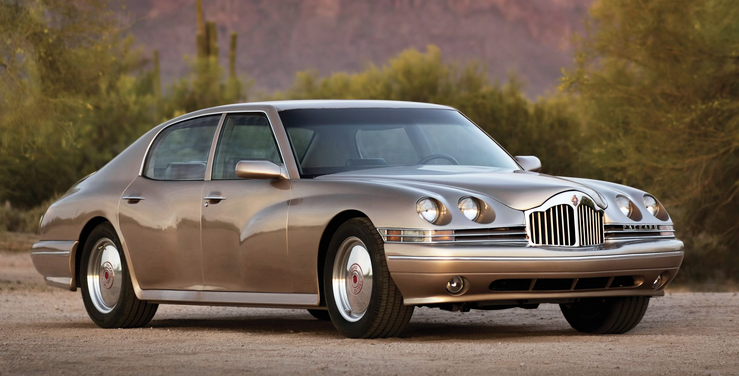 If you’re roughly my age—let’s say five decades into this whole life process—you’ve seen a fair number of automobile brands fade into the sunset.

I was probably most impacted by the demise of Pontiac, but I remember feeling a twinge of sadness at the deaths of AMC, Mercury, Oldsmobile, Plymouth, and—no kidding—Checker.

For the most part, once a brand is dead, it’s dead. The Pontiac nameplate, for example, is controlled entirely by General Motors, and that big corporation wants no part of stirring memories of a beloved brand it can’t turn a profit from. 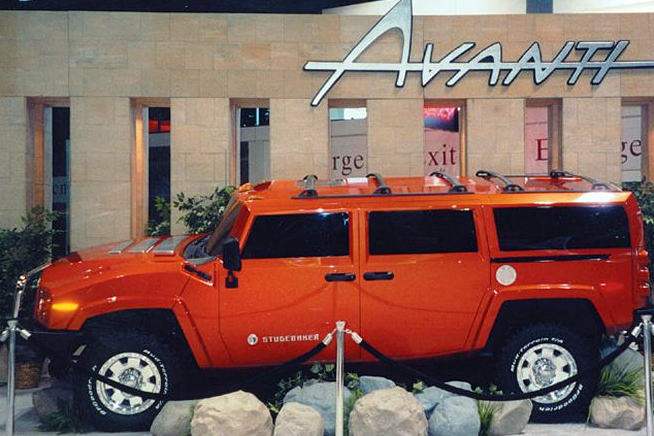 A bizarre Studebaker XUV Concept was seen at the 2003 and 2004 editions of the Chicago Auto Show.

However, a quick death isn’t always in the cards for beleaguered auto marques. Consider Studebaker. The one-time carriage builder wrapped up U.S. manufacturing at the end of 1963, and Canadian operations in ’66.

Studebaker was not still in its afterlife, however, and echoes of the once-great brand rippled through the industry for years to come. First, in the form of the Avanti II, a continuation of the original 1962-63 Studebaker Avanti. In its early years, the Avanti II stayed true to the original Avanti’s design.

Later Avantis proved less authentic, however; they were comprised of oddly shaped fiberglass bodies that were stretched over late-model Chevrolet Camaro and Ford Mustang mechanicals.

The weirdest Studebaker reconstitution came in 2003. At that year’s Chicago Auto Show, a company calling itself Studebaker unveiled a full-size “XUV” model that was more or less a Hummer H2 clone. The beastly SUV concept looked so much like a Hummer, in fact, that General Motors sued the rig’s builders for copyright infringement. A less Hummer-looking XUV was shown at the 2004 Chicago Auto Show, after which the company—and the XUV—disappeared completely. You can read all about the Studebaker XUV here.

This brings us to Packard. The once proud luxury-car builder threw its lot in with Studebaker in 1953, and for its declining years sold rebadged Studebakers as Packards–hardly a fitting end for company that had produced some of the finest—and most collectible—American automobiles.

Packard-branded vehicles were discontinued after 1958, and since then the auto brand has not been seen or heard from. Well, except for that one time…

There is a company that calls itself Packard, which maintains what is purported to be the official Packard website. In 1999, the folks at this Packard company introduced to the world the Packard Twelve Concept, a full-size luxury sedan that was designed to evoke the memory of classic Packard cars of the Forties and early Fifties. 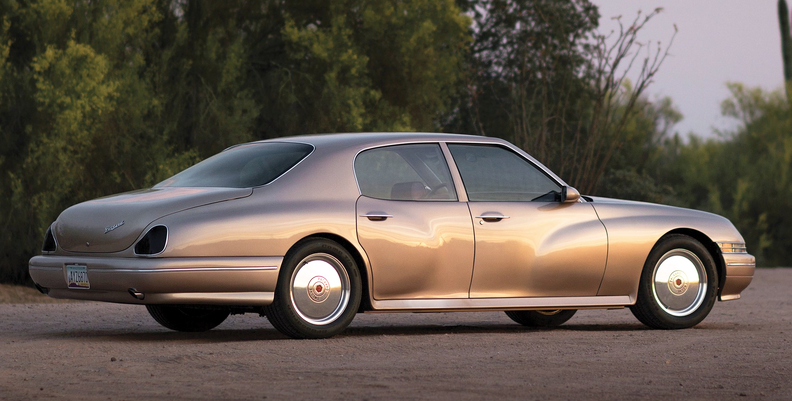 Pontoon fenders and massive amounts of rear overhang are the dominant design features of the Packard Twelve Concept. To some eyes, the rigidly straight rocker panel clashes with the car’s otherwise sculpted profile.

Note: I am cautious about calling this company Packard without qualification, as a number of online messages boards contain threads disputing the veracity of this organization’s claim to the Packard brand. That said, no one stopped this group from building and showing a car branded with the moniker.

At one time, the Packard website suggested that the Twelve Concept had been revealed at the prestigious Pebble Beach Concours d’Elegance car show, but the images and related text suggested that the car had been wheeled into the event’s parking lot and displayed there instead. 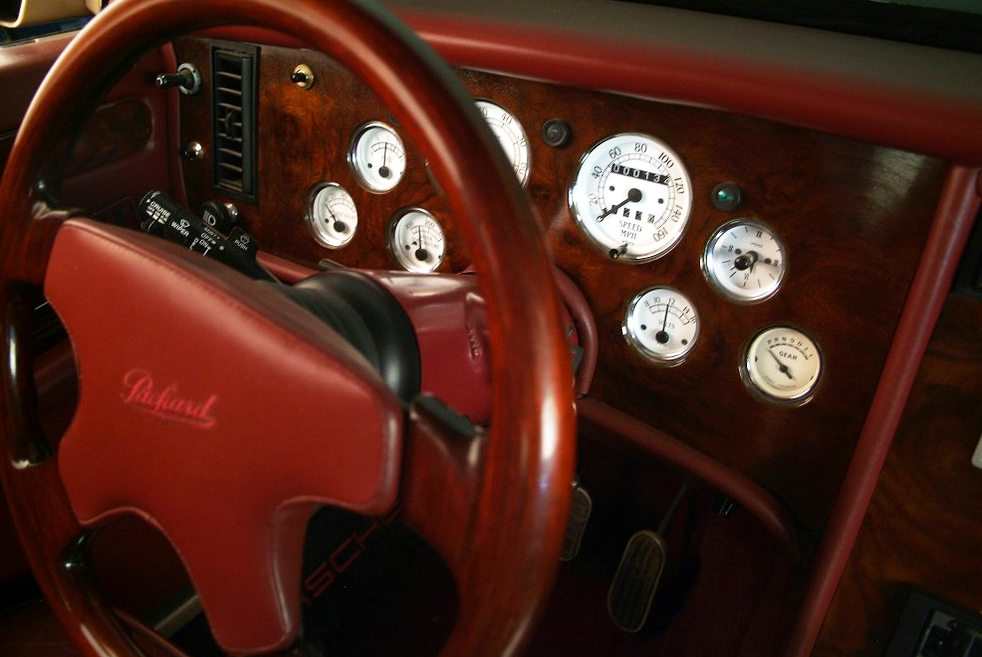 The Packard Twelve Concept dashboard is an intriguing jumble of high-end leather, polished wood, and switches and vents that appear to be harvested from a Ford Escort.

As always, style is subjective, but the collected quotes shared on the website from Pebble Beach show-goers who stopped to check out the Twelve were unanimously fawning. “What a modern Packard should look like,” was a recurring theme.

The Twelve Concept’s specs have been updated over the years, but the most recent set, still listed on the Packard site, list the car at 209 inches long overall on a wheelbase of 119 inches. That would make the Packard two inches longer than a new BMW 7-Series, but with a seven-inch shorter wheelbase. Looking at the Twelve in profile, it’s clear that much of that length comes in the form of rear overhang. 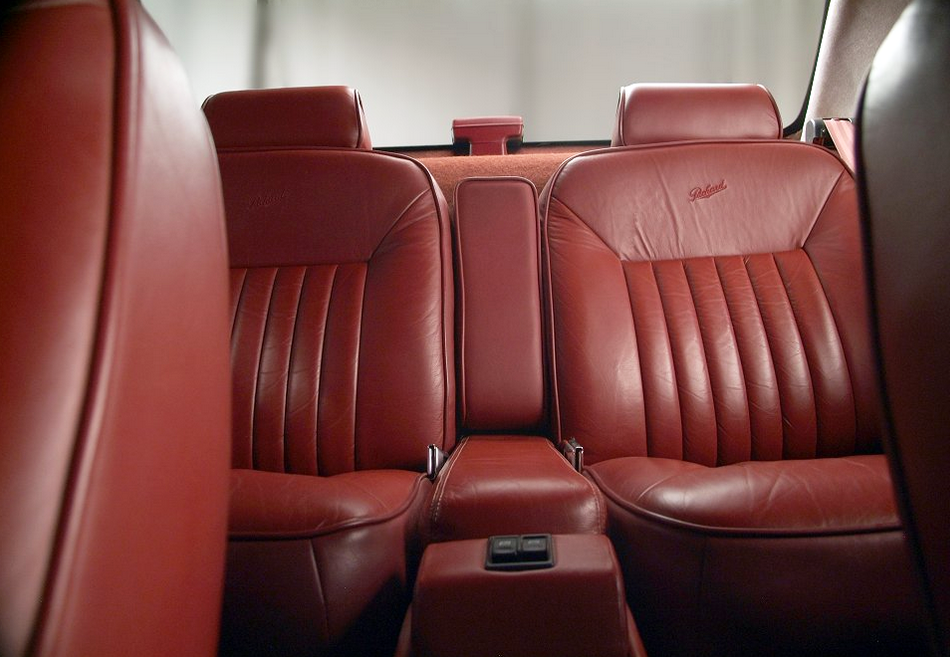 Per the Packard website, the Twelve is powered by a 525-cubic-inch (8.6-liter) 573-horsepower OHV V12 engine. The site does not mention a transmission, but other sources report the car being equipped with a General Motors-sourced 4-speed automatic.

With all-wheel-drive and a 2.59:1 final-drive ratio the Packard Twelve Concept will reportedly blast from 0-60 mph in 4.8 seconds and cover the quarter mile in just 12.5 seconds.

In an email exchange I had with an unidentified representative of Packard way back in 2002, the rep reported that the V12 was being sourced from racing supplier Falconer.

Images of the interior reveal an interesting blend of what appears to be high-end leather and nicely finished wood combined with very cheap-looking off-the-shelf plastic bits. Check out the A/C vents and turn-signal stalks for examples of the budget-grade trim.

I have learned precious little about the life of the Twelve Concept, though it appears that the folks at Packard wheeled it around for the occasional public viewing. For whatever reason, the Packard Company folks avoided displaying the Twelve Concept at Packard club events–something that apparently raised the ire of brand enthusiasts.

Spend time at the Packard website, and you’ll come to wonder as I do what purpose the Twelve Concept really served. The site seems designed to attract those who might be interested in licensing the Packard name. To that end, I suppose the concept car help raise brand awareness some.

I’m sure that if some well-funded, legit carmaker was interested in building a production version of the Packard Twelve, the Packard folks would have been all too happy to work out a deal, but that apparently never happened.

The only commerce that seems to take place on the Packard website is the retailing of very expensive replica trim pieces for vintage Packards.

Several years before that, the entire company had been offered for sale, but there were no takers. The 2007 asking price was $1.5 million, a sum I suspect would still be sufficient to purchase the mostly dormant company today.

The press photography here comes from the Packard website, which we strongly recommend you visit. If you like what you see, shoot the company a line; maybe you can talk someone there into building a Packard Sixteen Concept.

Not mentioned specifically in any of the Packard press material is the Twelve Concept’s interesting transverse leaf-spring rear suspension. An arrangement similar to this was employed on a number of General Motors products over the years, including the Chevrolet Corvette.