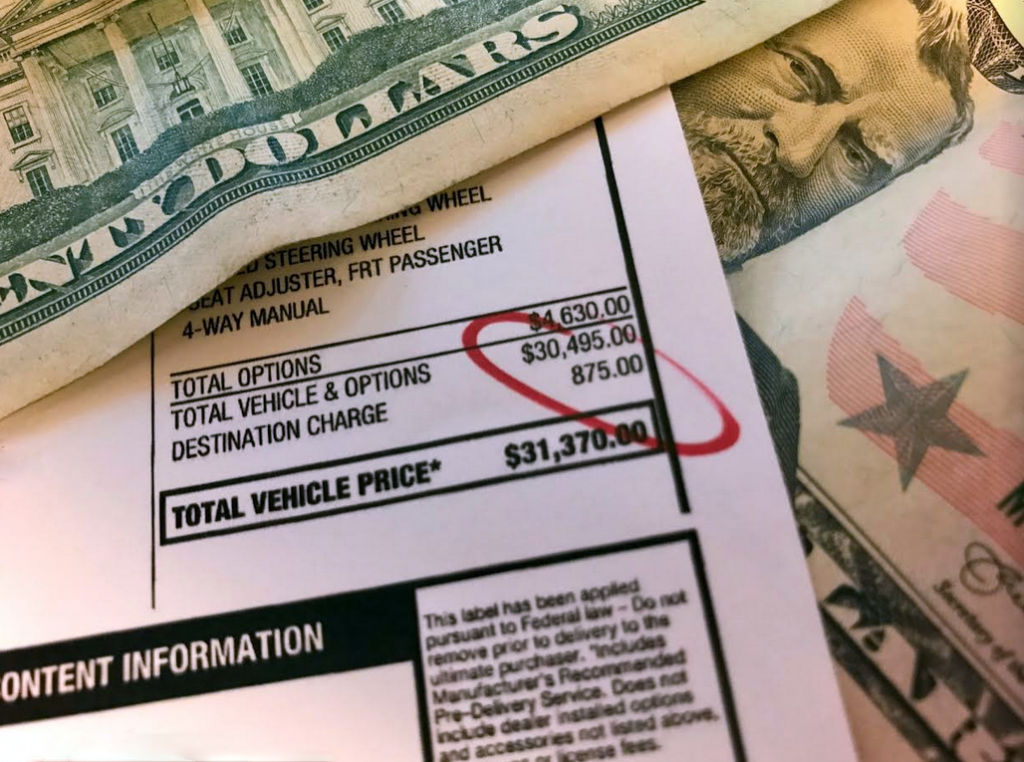 Why are you paying to have your new car or truck delivered to the dealership? Read on:

There was a wonderful Wild West quality to the early days of the American auto industry. Though we largely associate Detroit, Michigan, with the manufacturing of cars and trucks, pioneering car companies had sprouted up all over the country by the early Twenties.

Stutz Motor Company, for example, was building cars in Indianapolis, Indiana; the Cunningham company was located in Rochester, New York; and Doble Steam Motors was headquartered in Emeryville, California. And all of the far-flung manufacturing firms of this fledgling industry dealt with a common problem: delivering their finished vehicles to end customers.

While the U.S. auto industry’s early growth may have been explosive, it took place long before the existence of double-decker rail cars or the interstate highway system. Though most cars were ultimately shipped by rail, they often had to cover significant ground after having been delivered to a regional rail yard.

For this reason, carmakers were unable to quote a single price for the delivery of a given vehicle. Thus, the advertised prices for cars throughout the Twenties typically included the price of the car itself and language along the lines of “F.O.B. Detroit.” 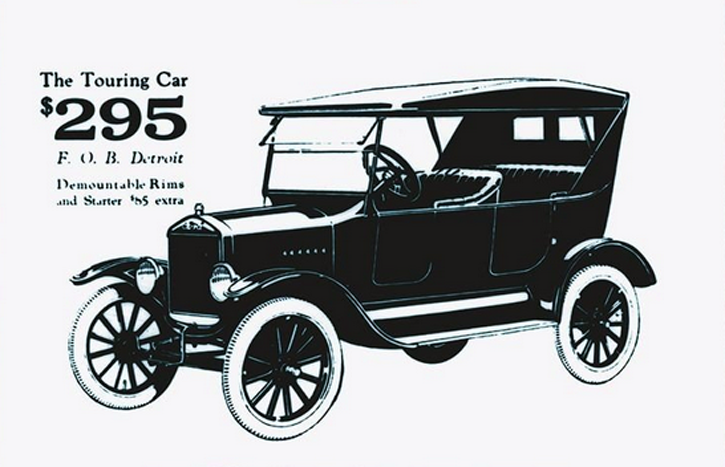 There was no destination charge on this Model T as long as it was picked in Detroit. Shipping charges were applied for other locations.

A shipping acronym still in common use, “F.O.B.” stands for Free On Board. Thus, the vehicle advertised would not include a delivery charge if it was picked up in Detroit, but would include those costs if it was shipped to another destination.

Over time, as the car dealership system developed, delivery prices started to standardize, and varied only by city—or sometimes state. Then, in 1958, Congress enacted the Automobile Information Disclosure Act, a set of laws requiring auto manufacturers to provide consumers with several pieces of information—all of which were to appear on what came to be known as the Monroney sticker, or, more commonly, the window sticker. The label was named for Oklahoma senator Mike Monroney, who introduced the original Automobile Information Disclosure Act bill.

One tenet of the Monroney label law was that the sticker include the manufacturer’s full suggested retail price of the car—including shipping. It is thus that the destination charge became a standardized line item on new-vehicle prices.

Though the destination charge varied geographically, it was no longer a mystery to shoppers—and dealers could no longer claim the fee was higher than it actually was.

By the Seventies, the destination charge had largely become uniform for all locations, and was thus the same in Tampa, Florida, or Las Vegas, Nevada, regardless of where the vehicle was built.

Note, however, that the destination charge can be slightly higher in some areas for a couple of manufacturers. Toyota, for example, still delivers vehicles in the south and southeast through two independent distributors: Gulf States Toyota and Southeast Toyota. Destination fees in these regions may be slightly higher. Also, some makers charge a higher destination charge for vehicles delivered in Alaska and Hawaii.

Here are a few commonly asked questions about the destination charge:

Can I avoid paying the destination charge?

No. There was a time that it was possible to take delivery of your new car or truck at the factory, and thus avoid paying the destination charge. In virtually every case, carmakers no longer accommodate that option. Plus, the law in most states requires that a new vehicle be delivered by a dealership.

Can I negotiate the destination charge?

Not exactly. The destination charge is real, and it is not marked up by the dealer. That said, you are free to negotiate EVERYTHING when buying a new car and truck. Generally, it’s most effective to negotiate the final price of the vehicle you are interested in, not the individual line items.

Do I have to pay tax on the destination charge?

Yes. Though it is technically a service, the charge is included in the final Manufacturer’s Suggested Retail Price (MSRP) and is taxable.

Some things to watch for: 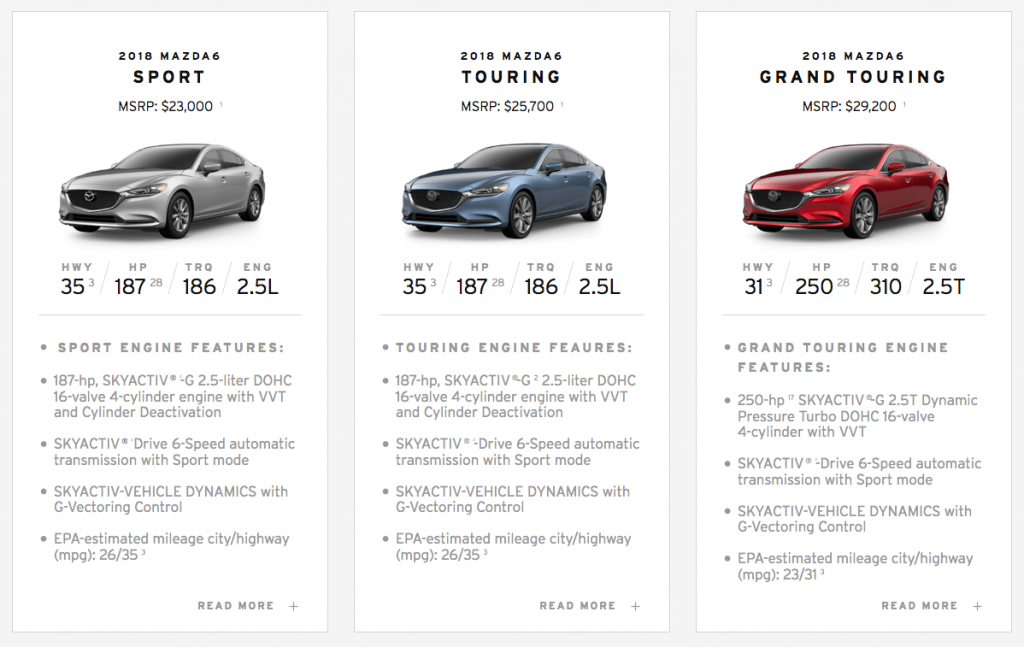 These 2018 Mazda 6 prices are displayed on Mazda’s website without the $895 destination charge. The fee does appear when you complete the “build your own” virtual configuration process. Most manufacturer websites work like this.

Playing games with the destination charge

Depending on where you live, it may be legal for a dealership to advertise the price of a vehicle without the destination charge. This is disingenuous, but it happens. Be sure to read the small print. Also, automakers often don’t include the destination charge on their websites, at least until you complete the “build your own” process. The destination charge is there, but it’s not always included in the numbers you may be looking at.

Getting rid of the destination charge

Some consumers and consumer-advocacy groups are calling for the abandonment of the destination fee. As the charge no longer reflects the actual delivery cost of the vehicle, and because the amount of the fee is simply rolled into the MSRP, critics argue that it no longer serves any real purpose as a line item, apart from allowing some dealers to play around with the advertised price of the vehicle.

On the other hand, without the destination charge clearly marked on the Monroney label, dealers could again return to the shady practice of claiming the charge is not included in the price of the vehicle seen on the sticker.

What is the destination charge?