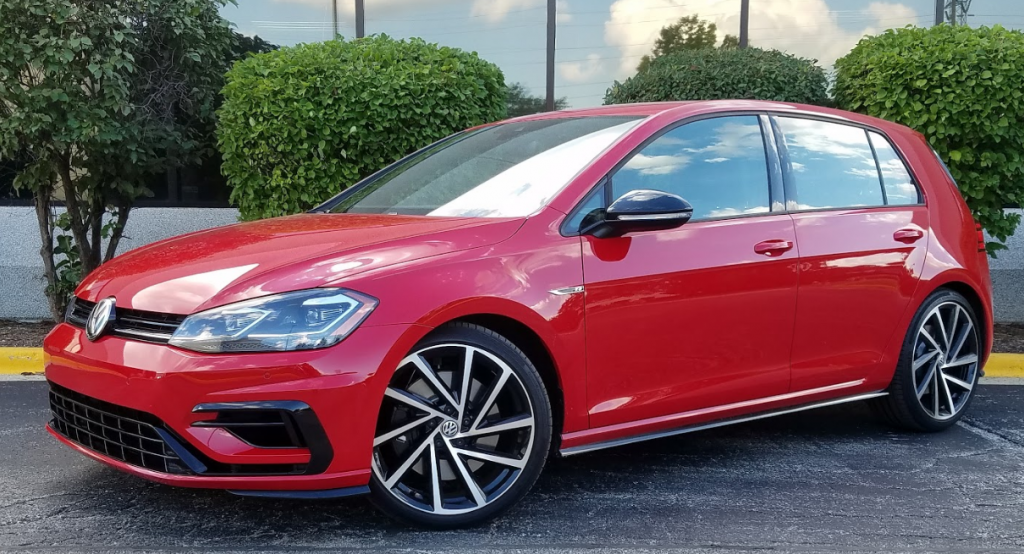 The not so good: Rear-corner visibility, lofty prices due to high standard feature content

My head slowly turned as I looked — slightly astounded — at my passenger. “In a way,” I said. And then I mashed the gas. 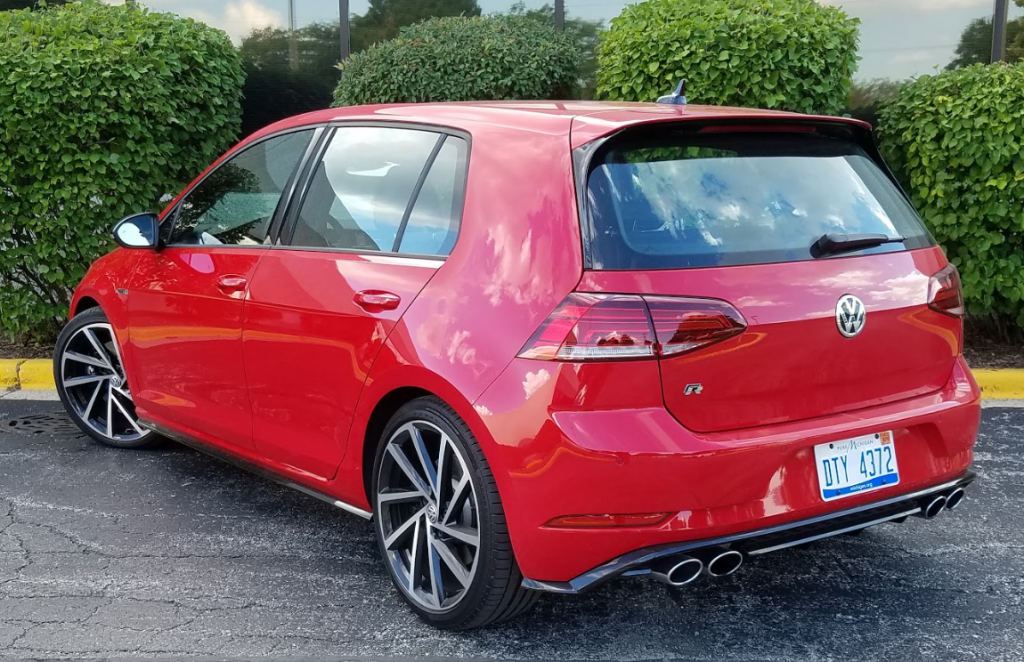 Aside from its 19-inch alloy wheels and quad exhaust outlets, the Golf R really doesn’t look much different than any other Golf. But those in the know will notice the discreet “R” under its left taillight … and be impressed.

Although there are any number of indisputably positive aspects to the Volkswagen Golf R — essentially the also-incredible GTI on all-wheel-drive steroids — one of them might be controversial: To the uninitiated — or in this case, just noted at a glance — the mighty Golf R looks very much like … a Golf. Making it essentially the Clark Kent/Superman of automotive endeavors.

It could also be called the “adult’s factory tuner car.” There are large-diameter wheels shod with wide, low-profile tires, to be sure. And there are quad exhaust tips in back. But otherwise, the Golf R is totally devoid of scoops, stripes, and spoilers that scream “Look at Me!,” often to people you … uh … really don’t want looking. Back when I was growing up, we’d have called it a “sleeper.” 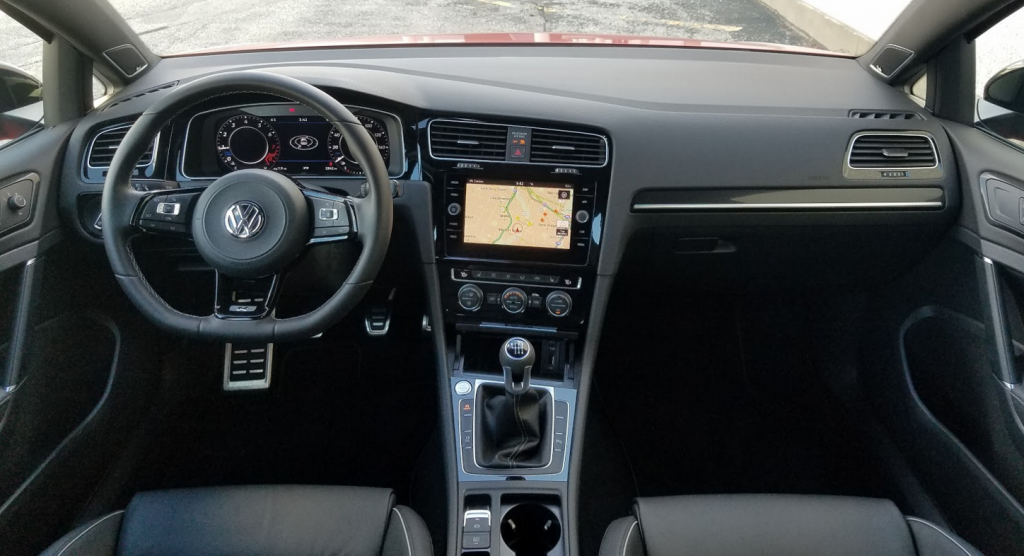 There’s nothing really racy-looking inside save for the aluminum pedals to give away the R’s true intent to unsuspecting passengers. Just a nice, clean design with fine materials and plenty of padded surfaces.

What makes it different from its GTI sibling is a more potent version of the 2.0-liter turbo that puts out 292 horsepower vs. 220, along with adaptive suspension and all-wheel-drive traction to put that power down. It also comes rather fully loaded (somewhat unfortunately), with leather upholstery, heated front seats, 12-way power driver seat with tilt cushion and adjustable lumbar support, dual-zone automatic climate control, Fender premium audio system with satellite radio and CD player (the latter becoming rare, and in this case, hidden in the glovebox), navigation system with 8-inch touchscreen, adaptive headlights, automatic high beams, adaptive cruise control, and Volkswagen’s Car-Net telematics system with remote functions and emergency assistance. It also comes with a full complement of high-tech safety features, including front and rear obstacle detection with rear automatic braking, forward collision warning and mitigation with pedestrian detection, blind-spot and rear-cross-traffic alert, and lane-departure warning. All nice, of course, but all contributing to a base price of $40,635 (including destination) for one with the 6-speed manual transmission — like our tester — or $1000 more with Volkswagen’s 7-speed DSG automated manual (which functions much like a traditional automatic). So not cheap.

But the best cars usually aren’t.

Inside, the look is of Teutonic stateliness, with clean lines and fine materials including lots of padded surfaces (such as the door tops). The heavily bolstered “sport” driver seat includes a tilt cushion and adjustable lumbar support that can really help in getting comfortable, huge amounts of front-seat room can be dialed in, and there’s ample room in back for adults unless the seat ahead is pushed far rearward (though that’s only necessary if an NBA player is behind the wheel). Visibility is good to the front, OK to the sides, fair to the rear, and a rearview camera is standard.

It’s hard to see here, but the “gauges” are actually images on a video screen. That might seem a bit sacrilegious to some, but at least they look fairly real, and the infotainment and climate controls are about as easy-to-use as they come.

Volkswagen has long had among the clearest and easiest-to-use infotainment systems around, and the one in the Golf R is no exception. Ditto the climate controls, which have individual mode buttons that allow you to activate defrost, dash, and floor vents all at the same time — a rarity. There’s also an unusually impressive amount of cabin storage space, including a large glovebox, small console box, two covered cupholders, a covered forward console bin beside Aux and USB plugs, a small console tray next to a 12-volt plug, a large drop-down left-side bin, and large map pockets with cupholders in the doors.

And then there’s the cargo area. Not only is it wide at the back, there’s a fair amount of underfloor storage space around the huge audio-system woofer, and the rear seat backs fold flat and level with the cargo floor to expand the nicely cubic space. And though it’s not really part of its physical attributes, it’s worth noting that — like most other Volkswagens — the Golf R is covered by the company’s impressive 6-year/72,000-mile bumper-to-bumper warranty, the longest in the industry. 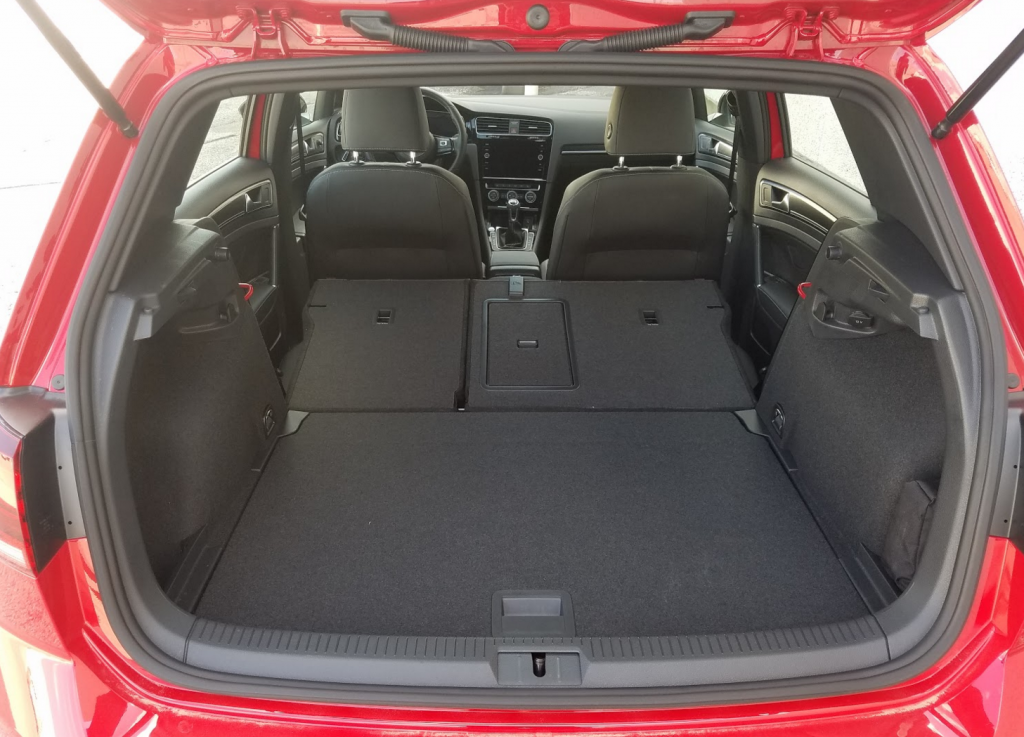 Fold down the rear seat backs, and there’s lots of flat-floor, cubic cargo space. There’s some more under the floor, though a huge speaker — part of the standard Fender audio system — takes up much of the space.

But the focus of the car is performance, and in that respect, the Golf R delivers in a big way. The first things you notice are that the steering is quick with a good amount of feel, the brakes apply with just a short stroke of firm pedal feel, and the clutch and short-throw shifter work with smooth precision — all contributing to a racy feel without ever going fast. But should you decide to go fast, the Golf R is more than happy to oblige. Handling might well be about as good as boxy hatchbacks get — fast corners elicit little body lean, and bumps are negotiated with a firm but rarely harsh feel. Hit the gas while trolling along at normal driving speeds, and after a brief moment of turbo lag, the car catapults away; it even pulls fairly strongly at highway speeds without shifting out of 6th gear. And running through the gears with the pedal down is just pure joy.

Although it comes with all-wheel drive, note that our test car was shod with summer performance tires, meaning those in cold climates should either not drive it in the winter, fit it with all-season tires, or switch over to winter tires when temperatures drop. But other than that, one of the true beauties of the Golf R is that in terms of room, practicality, and overall goodness, it’s really just like any other Golf …

… Until you mash the gas.

Granted, in most ways, it doesn’t look like 40 grand — or an outstanding performance car. But in the latter case, that’s one of the Golf R’s many appeals. Not so much the former, however ….