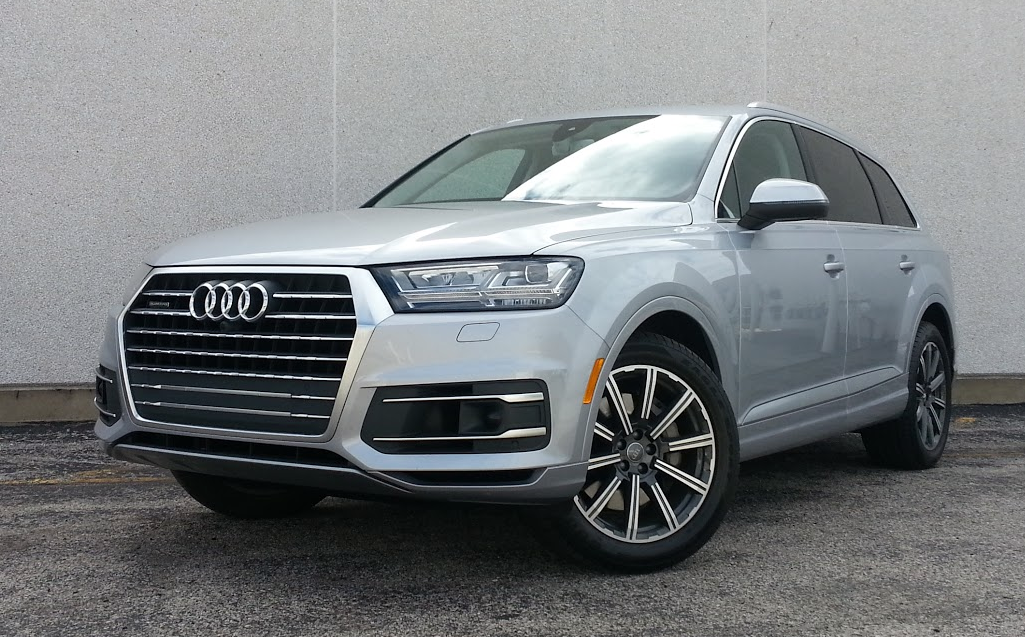 The not so good: Some complicated infotainment functions

If you worked as long as the original Audi Q7 did, you’d want to take a whole model year off at some point, too. Having persisted in its core form from introduction as a 2007 model through 2015, the Q7 is back for ’17 a bit lighter and a lot more tech savvy. It’s been fully redesigned on a new platform, so appearances have been redone inside and out, too.

The Q7 remains a seven-passenger vehicle, though not the roomiest in the third row. At launch, the sole powerteam is a supercharged 333-horsepower 3.0-liter V6 with eight-speed automatic transmission carried over from the previous generation but with better fuel-economy ratings. A turbocharged 252-hp 2.0-liter 4-cylinder will be available later in the model year. (A lower-powered blown V6 and a 3.0-liter turbodiesel did not make the jump to the Q7’s second generation.) 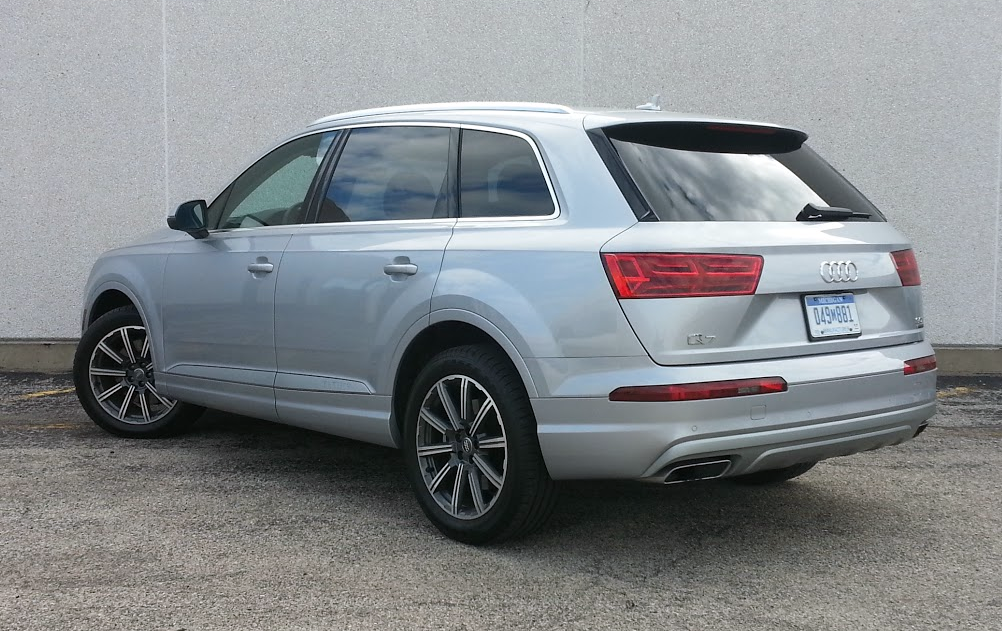 Consumer Guide® tried out a Premium Plus version that started at $58,800—though the Plus is really an “option model” carved out of a $4000 package tacked on to the “basic” Q7 Premium. All of Audi’s largest sport-utility vehicles include the marque’s quattro all-wheel-drive system, a panoramic two-panel sunroof, and leather upholstery. Premium Plus highlight features include keyless start and entry, a hands-free tailgate release, navigation with voice control, handwriting-recognition technology through the MMI central controller, “side assist” and “pre sense rear” (which includes rear cross-traffic alert and vehicle-exit assist), and smartphone integration including Apple CarPlay and Google Android Auto. 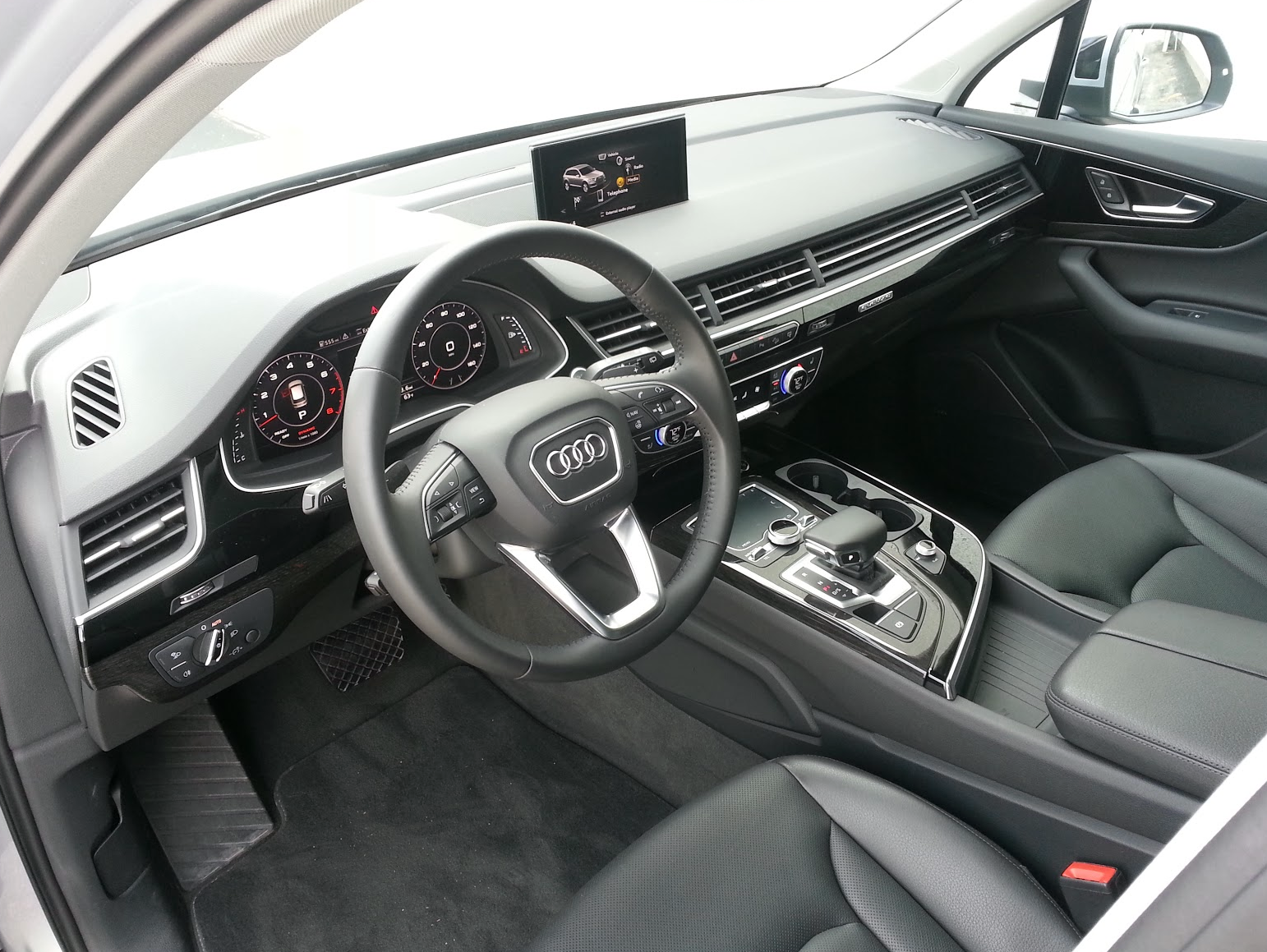 The Q7’s cabin is roomy, nicely appointed, and very quiet.

That’s hardly all the tricks up Audi’s sleeves, however. CG’s well-optioned test truck—full delivered price came to $68,925—incorporated the extra-cost Driver Assistance and Vision packages. The former adds traffic-sign recognition, headlight high-beam control, and adaptive cruise control with stop-and-go and traffic-jam assist that allows for semiautonomous driving at speeds up to 37 mph. The latter package folds in LED headlights, a top-view camera system, and Audi’s “virtual cockpit” that fills the 12.3-inch instrument display space with a panoramic 3D-like map while gauge “dials” migrate to the corners of this area.

While MMI puts access to the Q7’s various infotainment features at a driver’s fingertips, it also makes that driver tap in to an array of menus and work a bit at getting the desired outcome. (Setting up a list of radio presets requires more effort than it ought to, for instance.) A screen that powers up from the top center of the instrument panel displays audio-system information. Stand-alone climate controls located low on the dash rely on twin dials for temperature selection, with buttons to activate various functions, and toggle switches to select fan speed and direction.

Eminently more likeable is the Q7’s on-road performance. The supercharged V6 generates enough torque—325 lb.-ft. at peak—for quick acceleration from standing starts. Tap the “Drive Select” button on the dash to switch from “Comfort” to “Dynamic” mode and the changes to throttle response and transmission shift points turn an upscale grocery-getter and kid-fetcher into something uncharacteristically racier. (Indeed, the quick response in Dynamic mode almost makes the Q7 annoying to drive in dense stop-and-go traffic situations when forward progress comes just a few feet at a time before hitting the brakes again.) Drivers have lots of choices for setting up the car to their liking. Drive Select also has “Auto,” “Allroad,” “Off-Road,” and “Individual” modes. 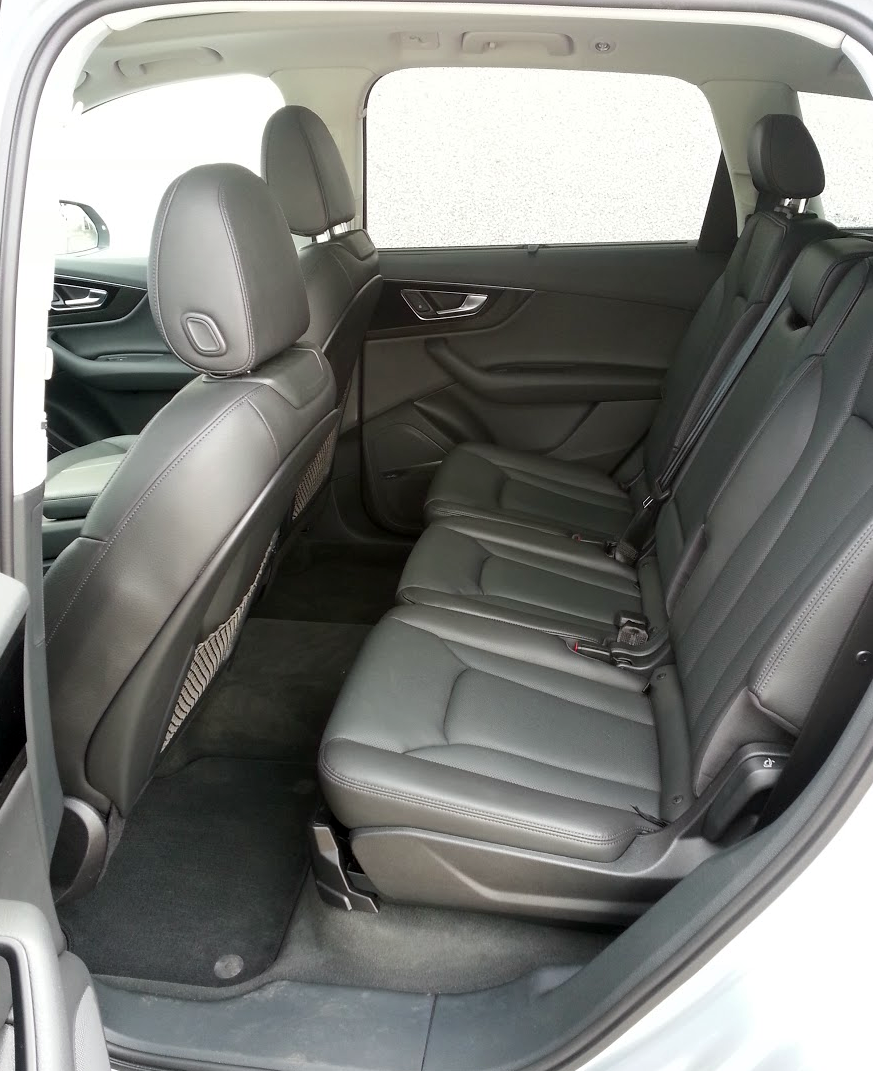 Although it weighs about 5000 pounds, the 2017 Q7 is lighter than the vehicle it replaces, thanks to considerable use of aluminum components. Certainly that has an effect on the EPA fuel-mileage ratings. At 19 mpg in the city and 25 on the highway, they represent gains of three mpg each from the same engine in the 2015 model. This reviewer’s experience was a little different. Switching between Comfort and Dynamic (and often disabling the stop/start feature), he averaged 17.94 mpg from a trip of 184.3 miles that was 75 percent city-style driving.

Ride is smoother and handling crisper than most drivers will expect from a seven-passenger SUV. (Drive Select also influences suspension behavior, which stiffens the ride somewhat in Dynamic.) Cornering lean is nicely controlled, and there’s almost no floating or wallowing over pavement bumps in expressway commuting. If anything sours the driving experience, it may be the aggressive lane-keeping assist. In certain curvy sections of his Interstate commute, this driver couldn’t seem to keep the truck centered in the lane to the safety system’s liking. (In the meat bag’s judgement, he was squarely in the lane the vast majority of the time.) Given the system’s “prime directive” to correct, correct, correct, the sensation is like that of driving in a strong crosswind. In fact, the Q7 is so adept at this that if you release the wheel on a straight stretch of well-marked road, the vehicle will subtly Ping-Pong itself back in line as it senses itself drifting to the edges of the lane—and then after a few seconds it will scold you to quit fooling around and resume steering for yourself. Imagine that: For 59 grand you can own a vehicle that is capable of steering itself and seizing the moral high ground.

Interior appointments have a premium look and feel, with wood inlays, brushed- and bright-metal highlights, and an abundance of pliable soft-touch surfaces. The cabin is commendably quiet, driver vision in all directions is good, and entry and exit are easy. Head- and legroom in the first two rows will satisfy most passengers, and there’s a legitimate chance at three-across adult seating in the second row. Among the comfort options added to the CG test vehicle were the Cold Weather package (a heated steering wheel with shift paddles, and heated rear seats) and the Warm Weather package (four-zone automatic climate control—in place of the standard three-zone control—aluminum-optic diffuser-vent trim, four-way power lumbar adjustment for front seats, ventilated front seats, and manual sunshades for the second-row doors and rear window).

The 2nd- and 3rd-row seatbacks fold flush with the load floor, creating a vast cargo area. 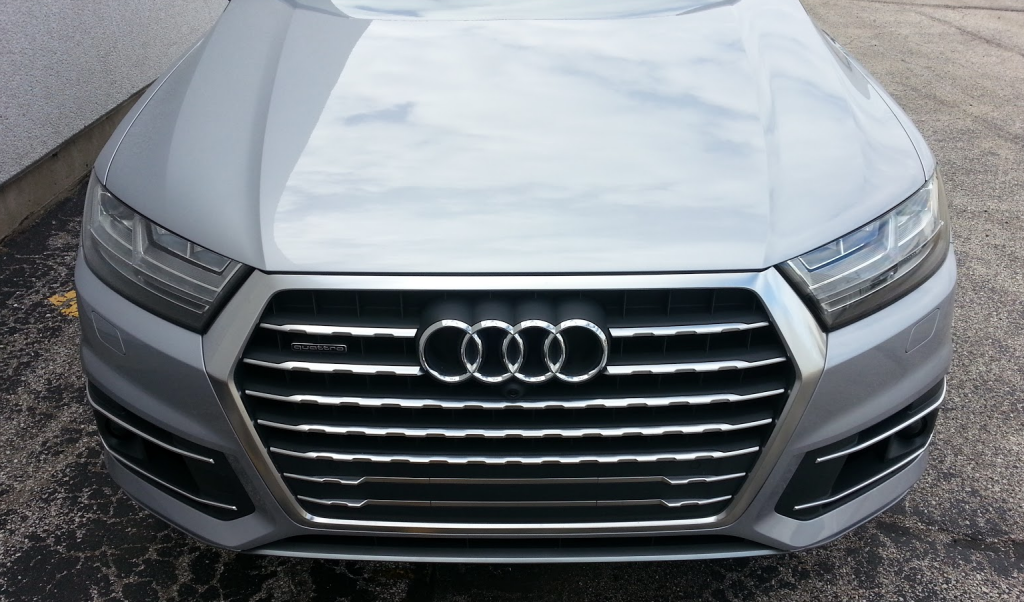 The new Q7’s styling is a bit more angular all-around than the previous generation.  “Serrated” grille bars are an interesting design feature.

Personal-item storage around the cabin is merely passable. Rear cargo capacity is skimpy with all seats up, but improves as the rear and middle rows are retracted. Indeed, with the 40/20/40 second-row seats down, a unified, flat load floor becomes available.

Given that the Q7 has returned a better vehicle in almost every way, we’re inclined to forgive the model-year hiatus.

2015 Lincoln Navigator: A Step Up in Large-SUV Luxury