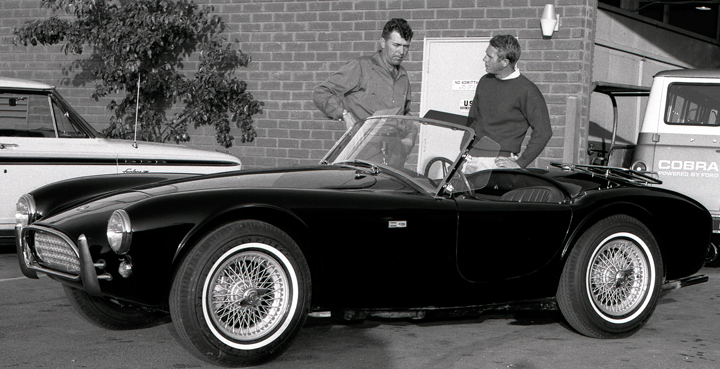 At the New York Auto Show in April 1962, a pearl-yellow sports car was on display. The formula wasn’t particularly new: a British-built roadster with a relatively powerful American-built engine. The shimmering yellow machine was an AC Ace modified to accept the new 260-cubic-inch “small-block” V8 originally designed for the 1962 Ford Fairlane. The Shelby Cobra had arrived.

Carroll Shelby, a Texan who counted chicken farming and race car driving among his past professions, had coordinated the whole deal. He knew how to take ingredients available to him and come up with something that was way more than the sum of its parts.

I’m a bit younger than the Cobra, so I don’t remember the car when it was new. Like plenty of kids before me, I was introduced to Shelby’s creation by the old AMT plastic model kit. That was around 1980. Books and old car magazines have helped me fill in the story since.

To be honest, I hadn’t realized the Cobra was turning 50 until last week. But early Cobras have been popping up in unexpected places the last couple weeks. First, I picked up the August 1962 issue of Sports Car Graphic for 50 cents at an antique store. One of the main articles was the magazine’s first Cobra road test. My favorite quote from the piece has to be one of the photo captions “. . . at full noise in third, car sticks to the road like paint.”

Then while looking for pictures of Shelby’s latest Mustang, I came across this great photo of Carroll Shelby and actor Steve McQueen talking over the Cobra’s finer points. I hope you enjoy seeing it as much as I did.