I have a confession to make: I never really outgrew Hot Wheels and Matchbox toy cars. My interest has ebbed and flowed over the years, but it has never gone away completely . . . and these days, I seem to be in “flow” mode. Part of the reason is that Mattel has been pushing a lot of ’80s-nostalgia hot buttons recently in the Hot Wheels line. They’ve released a steady flow of ’80s TV and movie cars over the past couple years, such as the Ghostbusters Ecto-1 ’59 Cadillac ambulance, the Back to the Future DeLorean, KITT from Knight Rider, and the A-Team van. (In my experience, all of these “Hollywood” vehicles are frustratingly hard to find in stores; collectors snap them up almost as soon as they’re put out.) And, Mattel has reintroduced the Hot Wheels “Hot Ones” line as a separate nostalgia series. Oh, boy. You know you’re getting older when the throwback reissue series is comprised of many of the same cars you had as a kid.

Hot Wheels has been big on nostalgia and catering to adult collectors since the early ’90s. Up until recently, however, most of the nostalgia/reissue cars centered on the Hot Wheels of the late ’60s and early ’70s . . . the era of “redline” wheels and candy-colored “Spectraflame” paint jobs. I came of Hot Wheels age in the late 1970s, at the tail end of the redline era, so I never had those cars as a kid. My childhood Hot Wheels fandom was probably at its peak from 1979 to ’83, which is the exact time frame these reborn Hot Ones cars are recalling.

Some of the vehicles in the line are new or recent castings that didn’t actually exist back in the day, but others are originals that haven’t been seen in 25 years or more. Almost all of them are finished in eye-grabbing colors with gaudy tampo graphics that aim for the best in late 1970s/early 1980s kitsch. I’d complain that the new Hot Ones retail at more than double the price of the regular-line cars, but since Hot Wheels have basically stayed the same price for the last 40-plus years, I’ll let it slide.

Have a look at the six Hot Ones cars that I couldn’t resist buying (yes, I’m quite proud that I’ve limited myself to six), while I go try to get my head around the fact that 1982 was 30 years ago.

The “Spoiler Sport” looks like a first-generation Lotus Esprit mated with a winged custom 1970s street van. First issued in 1977, this casting was last released in 1985. The black version on the right wears gaudy graphics that mimic the original issue. 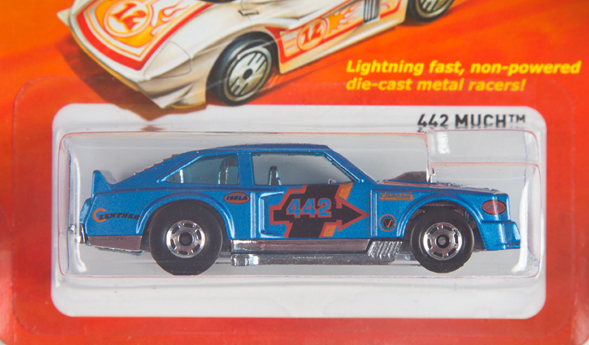 Could there be a better snapshot of short-lived late-1970s trends than the “442 Much”? The rather ungainly “Aeroback” sloped roof line of the 1979 Oldsmobile 442 looks a bit more interesting with the addition of wacky IMSA-style flares and spoilers, a hood scoop, rear window louvers, and wild side pipes. This casting was first issued in 1979 as the “Flat Out 442.” 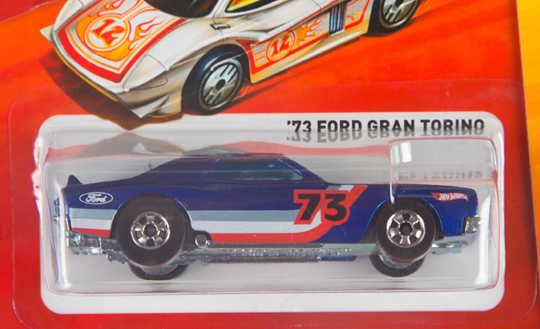 The ’73 Ford Gran Torino was first issued as the Torino Stocker in 1975, and was last issued in 1985. Exaggerated long hood/short deck proportions were common among Hot Wheels versions of mid-1970s cars. 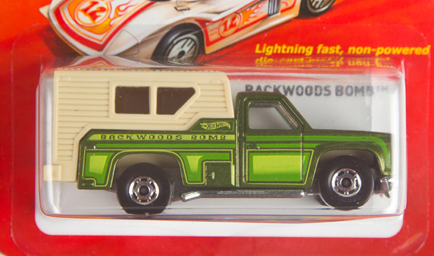 The “Backwoods Bomb” is a stylized version of a ’70s Chevrolet pickup with a utility bed and a plastic camper topper. There was also a tow-truck version called the “Ramblin’ Wrecker.” The paint quality and tampo artwork on the reissued version is much nicer than the originals, but still retains a retro feel. 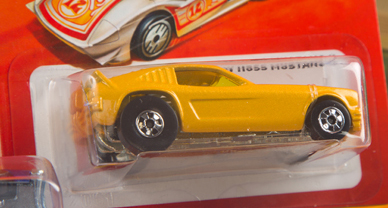 The “Show Hoss” Mustang II has a flip-up funny-car body, which was a very big deal to me when I was seven.