A Quick Spin in a Euro-spec Ford Focus with a 1.0-liter 3-Cylinder EcoBoost

Don drove this Euro-spec Ford Focus with the 3-cylinder EcoBoost engine. “From a stop,” he writes, “it was quicker than I expected.”

I recently spent a beautiful summer day at Ford’s Dearborn Development Center at a media event. It’s a fairly surreal place since it is basically across the street from the Henry Ford Museum and Greenfield Village. The steam-powered train in the village is often heard, providing a bit of an audio link back to the time of Henry Ford.

Ford planned a full day of activities, and one of the more interesting ones was a chance to drive a European Focus with the new 1.0-liter 3-cylinder EcoBoost engine. Yes, a 3-cylinder engine. 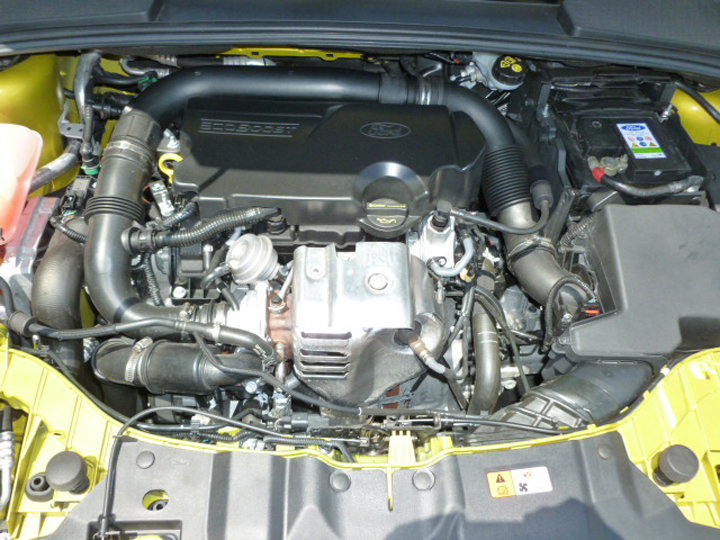 Ford’s 1.0-liter three is a new design; it’s not based on a four with a cylinder removed. Engineers went with a cast-iron block because it allowed them to keep the engine as compact as possible. A powertrain engineer said the 1.0 weighs 213.8 pounds. Like other EcoBoost engines, it uses a combination of turbocharging, direct fuel injection, and variable valve timing.

In Europe the engine comes in two versions, which make approximately 98 and 123 horsepower. The cars I drove had the 123-horse engine and a 6-speed manual transmission. European fuel economy is rated at 56.5 mpg.

Three-bangers are fairly unusual in America, the best known probably being the Suzuki-built units in the old Chevy Sprint, Geo Metro, and Chevy Metro subcompacts. I’ve never driven one of those.

Another journalist had wounded one of the transmissions earlier in the morning, so we were warned that one car wasn’t at 100 percent. We were able to drive on a short road course, and I’d guess the lap took well under a minute. Production Focus Electrics were available to drive on the same course as well.

I was able to complete maybe a half dozen laps of the curve-filled undulating track in the 1.0-liter Focus, so my impressions are based only on that. I never got past second gear.

From a stop, the car was quicker than I expected, and the engine revved freely and smoothly. When shifting to second, you had to try to keep the revs up. If you let them drop too far, there wasn’t much power on tap. The car also felt quite frisky and seemed reasonably fun to drive.

These were very short drives in a very unusual circumstance, but my first impressions of the littlest EcoBoost yet are positive. Ford says the 1.0-liter engine will be available in a small car in the U.S. sometime next year. For now, that’s all they will confirm. There are no details on which car or with what transmission. No talk about fuel economy numbers, either.

I’m glad I got my few minutes of seat time. I can’t come to too many conclusions based on such a short drive, but it was enough exposure that I’m curious to find out which car the 1.0-liter EcoBoost will appear in, and when I’ll get a chance to drive it.