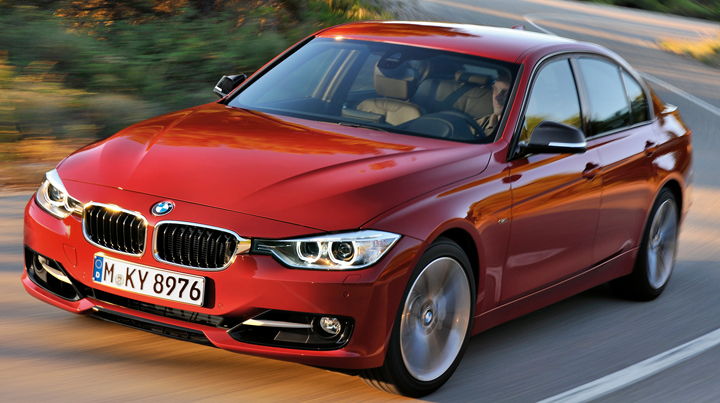 Note: This report supplements Consumer Guide Automotive’s full report on the 2012 BMW 3-Series Sedan, a premium-compact car that starts at $34,900.

Acceleration: Car and Driver clocked a 328i sedan with 8-speed automatic transmission at 5.6 seconds 0-60 mph. I’d guess my test manual model might be a click or two slower, as the transmission retains BMW’s traditional “high-inertia” action (my term), which frustrates truly fast shifts and quick launches; it also remains a bit notchy. At least clutch action is smooth, progressive, and agreeably low-effort. But the automatic swaps cogs faster than most people can, and it should probably be your choice.

Either way, the new turbo 4-cylinder feels punchy in most situations. It doesn’t have the effortless power delivery of the previous 328i’s non-turbo 3.0-liter six, but it’s not peaky either, pulling smoothly at lower revs even in 4th or 5th gear. Still, if you’ve got the manual, you’ll need to shift fairly often to get all the engine has to give.

I didn’t bother with the ECO PRO mode, but like my colleagues I noticed that the engine stop/start system is quite clunky—rather disappointing for a BMW. And it seemed to have a mind of its own on this test car. Most of the time it activated only at a full stop with the gearlever in neutral, clutch pedal depressed, and foot off the brake, but it sometimes didn’t activate with the A/C engaged in hot Arizona temps. This may have been to preserve the auxiliary battery that refires the engine on lifting off the clutch, but it still put me off.

The Driving Dynamics Control is a mixed bag for me. The two Sport modes alter powertrain response, suspension firmness, or both, depending on how they’re programmed (via the iDrive controller), but the differences aren’t great versus Comfort (which is always selected on start-up). I did notice slightly crisper throttle response in Sport, but I also noticed what felt like a slight engine “surge” on toggling between Sport and Comfort at highway speeds, though indicated rpm stayed the same. Overall, I’d say BMW still has some refining to do on this and the stop/start setup.

Fuel Economy: My tester returned 25.3 mpg in Phoenix-area driving, about 60 percent of which was fast freeway cruising. That’s in line with the EPA’s estimated 23 mpg city and 34 highway, but it’s slightly disappointing in view of what felt like shortish final gearing that had the engine spinning a fairly busy 3000 rpm in top gear at 70 mph on the flat. I’m noticing shorter (numerically higher) gearing in many smaller-engine cars—necessary to provide a decent performance/economy balance—but mpg here would probably be better with a longer-striding (numerically lower) ratio.

Ride Quality: This Sport Line-equipped car came on all-season 225/45R18-91V Pirelli Cinturato tires. Note that run-flat tires are standard on most BMWs now, and they do ride quality no favors on any model versus conventional tires. My colleagues are right to say that the 3-Series still favors “taut composure over cushioned isolation” and that the Sport Line suspension is “noticeably stiffer . . . though not punishing.” Even so, do try before you specify that option. Even in Comfort mode the test car could be fidgety-pattery except on the glassiest pavement, and that gets old real fast. On the plus side, it was less thumpy than previous run-flat-shod 3-Series, and there’s no heave or wallow over large humps and dips—as you’d jolly well hope.

Steering/handling/braking: The main-report comments say it all. Despite slightly larger size and a bit more weight, the redesigned 3-Series sedan is just as athletic, “tossable,” and fun as previous models. The 4-cylinder versions might be best, because the lighter engine means less weight on the nose and thus more-responsive turn-in (though BMW, as always, claims ideal 50/50 fore/aft weight distribution for just about all its products). I also agree that the steering is “wonderfully precise and direct,” but it’s low on road feel and a bit light for best control when hustling through tight twisties. It “heavies up” nicely in one of the Sport modes but still feels rather numb, especially compared with earlier 3-Series. Happily, the brakes are as smooth, powerful, and progressive as ever.

Quietness: I’ll part company with my colleagues here in noticing hardly any wind noise at speed, though maybe that’s because it was masked by relatively high tire thrum—another drawback of run-flat tires. But I do agree that the turbo-4 engine can sound a bit gruff at idle and from a cold start, though it’s otherwise smooth, primo-sounding, and never intrusive.

Controls: The dashboard design is typical modern Bimmer and works pretty well once you’re in tune with BMW’s control logic. But there are a few oddities. For example, some friends remarked that the fixed dashtop control screen looks like a low-budget accessory; “why didn’t they make it retractable?” was a frequent comment. And like all dashboard screens, this one can be hard to read in some light conditions, though at least it has decent contrast and fairly large labeling. The steering wheel rim blocks the stop/start switch. And I noticed that the center armrest interfered slightly with my shifting arm. But full credit for throttle and clutch-pedal placement makes “heel-and-toe” shifts a snap.

Details: As the main report implies, the latest 3-Series maintains the all-of-a-piece driving feel expected of BMWs. The cabin is also true to brand tradition in being nicely detailed and using top-quality materials. That said, the cabin ambience on this entry-level model is functional, not luxurious, despite the tester’s optional leather upholstery and Sport Line trim. And there is some molded plastic in the lower regions of the dash and center console that isn’t in keeping with the price or the brand.

Room/comfort (front): I had no issues with the Sport Line’s huggy seats, but I can appreciate that some folks might. My tester had no power-seat adjustments except, curiously, for lumbar support (a Sport Line bennie), but I didn’t have a problem with that either, although the backrest-recline lever isn’t that easy to reach. Headroom and legroom were more than adequate for this 6-footer. However, I had to sit a bit closer to the (manual) tilt/telescope wheel than I’d have liked, owing to the clutch pedal’s longish travel. Perhaps it’s my imagination, but the latest 3 seems to position front occupants a bit lower than the previous car did. In any case, I ended up raising the driver’s seat a bit to avoid feeling “buried” and for a better view out. Speaking of which, visibility is fine except—you guessed it—to the right-rear and dead astern, where it’s only OK. As ever, styling gets the blame.

Room/comfort (rear): A longer wheelbase gives the new 3 slightly more rear leg space than the previous car, but the gain is scarcely noticed. I wouldn’t say the aft cabin is cramped, but it is cozy for larger adults and too narrow for three to ride without feeling crowded. Then again, this car has always been a sports sedan, not a family hauler, so rear room is not a priority. Foot space is quite decent, but entry/exit suffers from a combination of narrow door thresholds and, with a front seat moved well back, little space ahead of the rear seat cushion for threading your tootsies in or out.

Cargo room: A good-size trunk is the usual upside of a cozy back seat, and so it is here. This trunk is also easy to load, as the main report notes, but I agree that charging extra for a folding rear seat is crass. I also agree that small-items storage is pretty poor, although the front-door pockets are useful. So, too, is the dashboard glovebox—once you find somewhere else to store the bulky owner’s manual, which was omitted on my tester.

CP Says . . . Despite the return of an entry-level 4-cylinder engine, the latest version of BMW’s top-seller strikes me as a classic case of “the more things change, the more they stay the same.” And for the most part, that’s a good thing. However, BMW’s manual-tranny shift action still argues for ordering automatic, the new Driving Dynamics Control seems of minimal benefit, and the handling-biased suspension compromises ride comfort too much for my liking—but then, I am getting old. Memo to Munich’s engineers: Puh-leeze lose the run-flats and standardize more-forgiving regular tires. Those gripes aside, this remains a hugely desirable compact sports sedan despite BMW’s typically stingy features-per-dollar quotient.