Affordable Hybrids? Well, There Are a Few… 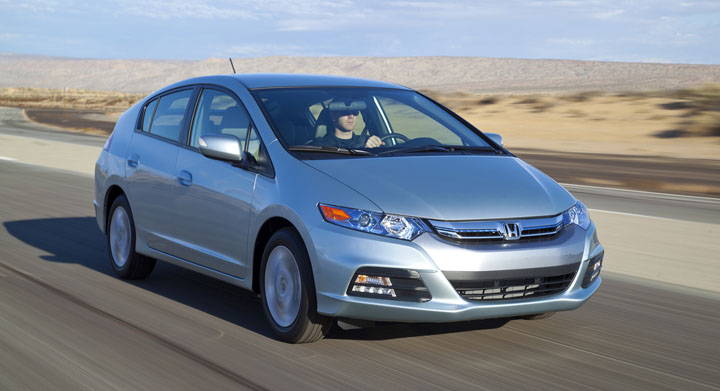 With chatter about $5 gas by Memorial Day, maybe it’s time to buy a hybrid.

The question is, are any hybrids affordable?

Here’s the thing about most hybrids: Even though they get better gas mileage, you pay extra for the hybrid technology. Over the lifetime of the hybrid, you may or may not come out ahead financially. Manufacturers can’t do much about the high production cost of a hybrid powertrain, but what’s frustrating is that many hybrid vehicles are unnecessarily expensive.

Of the 28 available 2012 hybrids, three of them have supercharged hybrid engines. The Porsche Cayenne S Hybrid, Porsche Panamera S Hybrid, and Volkswagen Touareg Hybrid—all priced north of $60,000—are designed more for performance than fuel economy. In addition, the Mercedes-Benz S400 Hybrid starts at $91,850, and the Infiniti M35h has a $53,700 price tag due largely to its robust 360-horsepower 3.5-liter V6. The Lexus LS 600h L is the most expensive hybrid of all at $112,250. The 600h L driver’s only solace is that the car gets slightly better mileage—2 mpg—than the base LS. Woo-hoo!

Of the remaining hybrids, nine come heavily equipped, meaning you’re paying thousands for the hybrid powertrain and thousands more for a variety of features. For example, the Toyota Highlander Hybrid is priced $10,050 more than the base Highlander. You’re paying not just for the hybrid powertrain but for an upgrade to a V6 engine, all-wheel drive, and 14 additional features. Such hybrids, it seems, are built not for the frugal-minded but for well-heeled drivers who want to “go green” but are not willing to “go without.”

Below are mini reviews of the nine 2012 hybrids under $30,000. Fuel-cost estimates are based on EPA-estimated mileage as well as the assumption that gas will average $4 a gallon over the lifetime of the car.

Advice: Consider it. The no-frills, hybrid-only Insight was designed to save you money. Though the powertrain generates just 98 horsepower, Insight is the lowest-priced hybrid on the market and gets 41 mpg in the city. It’s an ideal chose for frugal urban dwellers.

Advice: Strongly consider it. The Prius c is $5,050 cheaper than the “regular” Prius and gets an even higher EPA city rating (53 vs. 51). But it is a subcompact—and can be somewhat cramped for large adults—and its acceleration isn’t as strong. Consumer Guide Automotive gives the Prius c a 2 for acceleration, which is the lowest rating of any hybrid.

Advice: Consider it. The CR-Z, which comes only as a hybrid, is a 2-seater with little cargo space, restricted visibility, and an automatic transmission that will occasionally bog down and jerk when accelerating from a standstill. Nevertheless, you’ve got to love CR-Z’s sporty nature, sub-$20K price, and terrific fuel economy—37 mpg combined.

Advice: Avoid it. The Civic Hybrid is especially slow for a hybrid. And while it gets a combined 44 mpg, the money you save on gas compared to the Civic Sedan (an estimated $3,409 over 100,000 miles) won’t come close to the $7,445 extra you’d pay for the Hybrid over the base Civic Sedan w/automatic. The Hybrid is $5,395 more than the comparably equipped Civic Sedan LX.

Advice: Avoid it. The Optima Hybrid has the same powertrain as the Sonata Hybrid, which Consumer Guide Automotive did not like (see Sonata Hybrid below). Moreover, the money you’d save on gas over 100,000 miles compared to the (comparably equipped) base Optima probably wouldn’t equal the $4,700 price premium of the Hybrid.

Advice: Avoid it. Consumer Guide Automotive test drivers experienced annoying bogging and surging from the drivetrain in low- and moderate-speed driving. In addition, the $3,475 you’d save on gas over 100,000 miles compared to the base model probably wouldn’t equal the Hybrid’s $5,055 price premium.

Advice: Consider it. The Prius v is a wagon that offers 27.7 more cubic feet of cargo space than the original Prius. However, it’s $2,400 more expensive than that car and gets just 42 mpg combined compared to 50 for the Prius.

Advice: Buy it. Compared to the comparably equipped Fusion SE, you likely would save money in the long run with the Hybrid. Also, the Hybrid’s powertrain delivers spirited performance without any hybrid fussiness.

Advice: Consider it. The hybrid-only CT 200h is mechanically similar to the Toyota Prius and delivers the same mediocre performance. You’ll get Lexus luxury with the CT 200h, but it’s priced $5,120 more than a Prius and gets 8 mpg less than that car (50-42).