Aston Martin Previews the 2014 AM310 Vanquish

Only weeks after showing its Project AM310 concept at a toney classic-car gathering in Italy, boutique British automaker Aston Martin released details and photos of the expected production version. Called AM310 Vanquish, it replaces the 2-seat V12 DBS grand touring coupe and revives the name of that car’s predecessor, the 2002-07 V12 Vanquish. Though we haven’t heard what “AM310” signifies, Aston says the new Vanquish should start U.S. sale in early 2013 as a 2014 model. The base price will be five bucks shy of $280,000, about $1,500 more than the outgoing DBS coupe. A companion Volante convertible should arrive in early 2014.

Aston Martin marks its 100th anniversary next year, making the new Vanquish a kind of early birthday present. Far more important, Britain’s Autocar magazine says “the chassis, engine, styling and interior improvements introduced on the [AM310] will be rolled out across the rest of the range before the middle of the decade.” That implies similar updating for redesigns of the mainstay V12 DB9 coupe and Volante (which may be renamed too), the smaller V8 and V12 Vantage models, and the coupe-styled V12 Rapide sedan.

The 2014 Aston Martin AM310 Vanquish takes visual inspiration from the company’s $2 million One-77 hypercar, whose planned 77-unit run has been sold out. Though less exaggerated than the One-77, the Vanquish looks more muscular and aggressive than the DBS. The overall shape, proportions, and basic dimensions are the same, but the new car wears “bulgier” fenders and more heavily sculpted bodysides than the DBS, plus elongated side strakes a la One-77. The nose carries Aston’s traditional grille shape, new headlight clusters with LED-running-lamp “eyebrows,” and a redrawn lower fascia with an integral air splitter flanked by bigger air intakes. Out back, an elegantly formed spoiler rides above LED “boomerang” taillamps, another One-77 cue, while a new lower fascia is formed to function as an aerodynamic diffuser; it also cradles the twin exhaust tips.

Perhaps the biggest change for the AM310 involves a bodyshell rendered almost entirely in carbon-fiber, unlike the aluminum-paneled DBS and One-77. The lower fascias and sill skirts are left unpainted to emphasize the strong, lightweight material, and the same treatment can be optionally applied to the roof panel, door handles, door mirror caps, and/or side strakes.

The interior layout is much as before, but passenger room is up slightly in most dimensions, and a “+2” rear seat is newly available. Also new is a One-77-style center console with two rotary knobs for the standard automatic-climate-control system and four smartphone-like glass touchscreens, all to replace the DBS’ welter of slim mechanical switches. Other no-cost amenities include full-grain leather upholstery, an imitation-suede headliner, heated power front seats, a Garmin navigation system with a 6.5-inch pop-up LCD screen, Bluetooth and WiFi connectivity, and a 1,000-watt, 15-speaker Bang & Olufsen audio system. Among the various interior options is a leather/psuedo-suede steering wheel with ergonomic side grips that lend the helm a semi-square shape.

Carbon-fiber is also used for portions of Aston’s do-all “VH” platform, which dates from the original Vanquish and marks its fourth iteration with the AM310. The inner structure is otherwise composed of bonded aluminum members, as before, but this new version is claimed to be 25 percent stiffer and 13 percent lighter than the DBS platform, thanks in part to a reengineered front subframe. The switch to carbon-intensive construction reflects Aston’s experience with the One-77 and the general trend toward reduced weight in the interest of better fuel economy and lower CO2 emissions, the latter a major regulatory issue in Europe. Though initial press materials don’t list a curb weight, the new Vanquish is rumored to weigh about 120 pounds less than the 3,740-pound DBS coupe. It definitely holds more cargo. Aston claims 13 cubic feet of trunk space, up 60 percent.

Not surprisingly, the 2014 Aston Martin AM310 Vanquish also packs more power than the car it replaces. Though the veteran all-aluminum 5.9-liter V12 (often called a 6.0) continues, engineers have extracted 55 more horsepower and an extra 37 pound-feet of torque for the AM310, bringing respective totals to 565 and 457. Credit these gains to Aston’s first use of variable valve timing for both the intake and exhausts sides, plus a new cylinder head, revised engine block and intake manifold, larger throttle bodies, and fully machined combustion chambers. Manual transmission has been dropped, at least for now, leaving a rear-mounted 6-speed automatic as the only choice.

Making the most of its extra power, the Vanquish gets a launch-control system, another first for an Aston, plus rear-wheel torque vectoring and the expected stability system with traction control. The suspension continues with all-around coil springs and double wishbones, plus driver-adjustable adaptive shock absorbers with Normal, Sport, and Track settings. Brakes are large 4-wheel carbon-ceramic discs, also per DBS. Twenty-inch wheels remain standard but wear marginally wider tires: 255/35 front and 305/30 rear.

In a press release, Aston CEO Dr. Ulrich Bez terms the AM310 “the latest incarnation of everything we know, informed and developed from One-77. It is the ultimate Super Grand Tourer—confident and assured. . . .” A “Super GT” maybe, but not really a supercar despite a claimed 4.1 seconds 0-62 mph and a top speed of 183. As Britain’s Top Gear website notes, the DBS was 8 mph faster all out, and “Ferrari’s F12 Berlinetta—the Vanquish’s probable sparring partner—comfortably eclipses these stats,” not least because of its 703 horsepower.

Still, the 2014 Aston Martin AM310 Vanquish seems a remarkably thorough and resourceful update for such a small automaker and a grand way for the company to begin its second 100 years. We can’t wait to drive one. 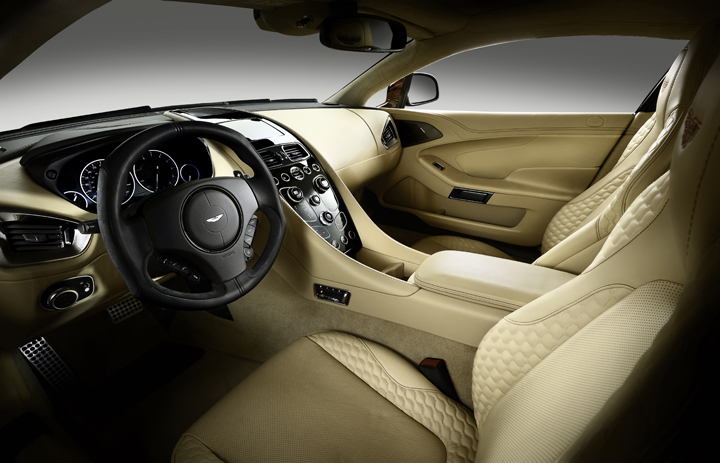 Aston Martin Vanquish: Still Scrappy After All These Years